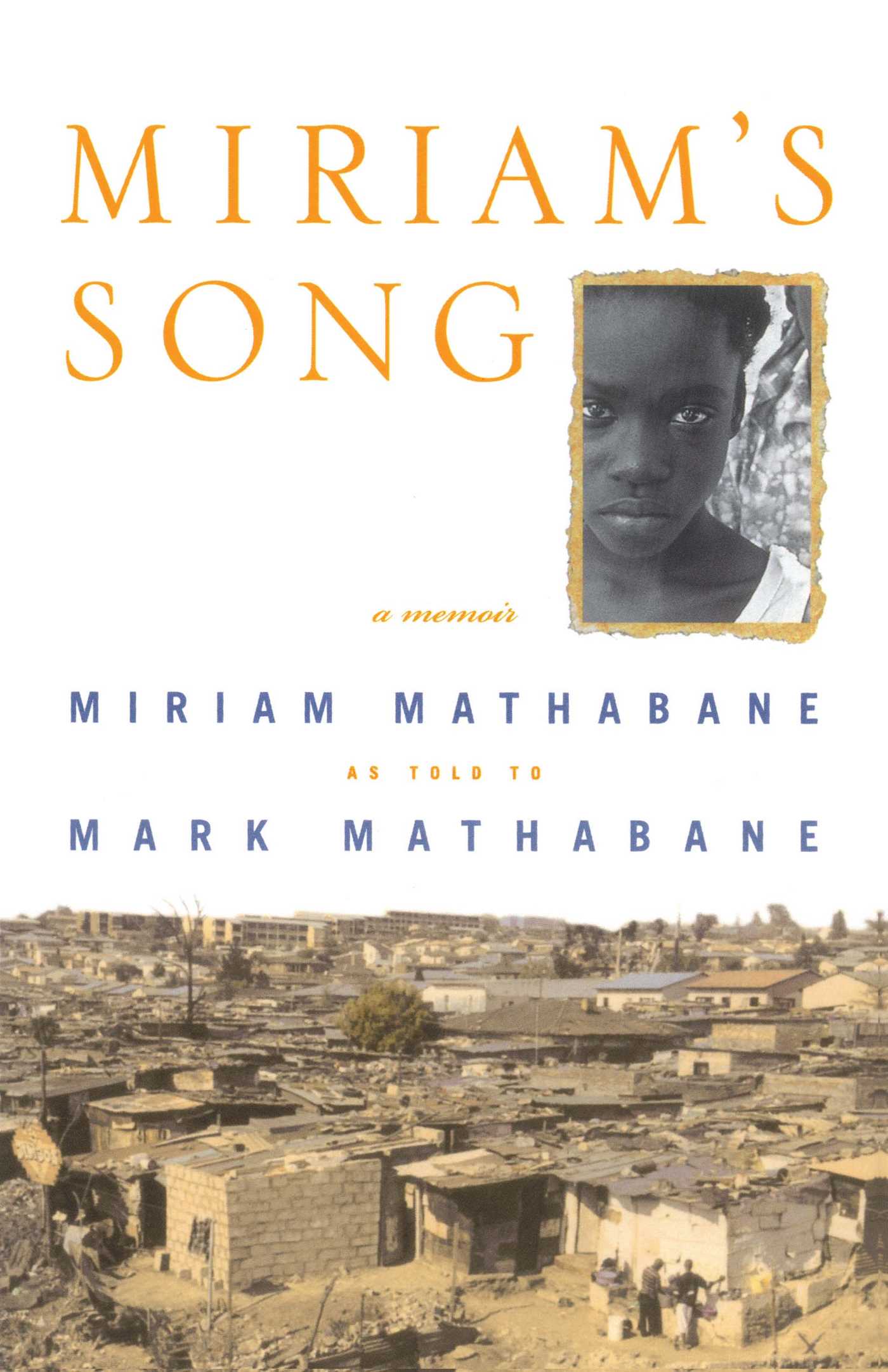 Mark Mathabane first came to prominence with the publication of Kaffir Boy, which became a New York Times bestseller. His story of growing up in South Africa was one of the most riveting accounts of life under apartheid. Mathabane's newest book, Miriam's Song, is the story of Mark's sister, who was left behind in South Africa. It is the gripping tale of a woman -- representative of an entire generation -- who came of age amid the violence and rebellion of the 1980s and finally saw the destruction of apartheid and the birth of a new, democratic South Africa.
Mathabane writes in Miriam's voice based on stories she told him, but he has re-created her unforgettable experience as only someone who also lived through it could. The immediacy of the hardships that brother and sister endured -- from daily school beatings to overwhelming poverty -- is balanced by the beauty of their childhood observations and the true affection that they have for each other.

It is toward the end of January, the middle of summer in South Africa. It's very hot and stuffy inside the small classroom, which has few windows and no air-conditioning, and is packed with over one hundred six- and seven-year-olds. Many are bawling and sniffling after being whipped. Others are screaming and want to go home to their mothers. Still others are chanting at the top of their small lungs a song about fingernails.

My heart is thumping against my ribs and my tongue is stuck to the roof of my dry mouth. Tears prick the corners of my bulging eyes as I stare at my Sub-A instructor. She's a tall, lean woman with a harried look on her dark face. We are required to address her as Mistress. Male instructors are addressed as Teacher. The mistress is wielding a thick ruler and giving us a tongue-lashing about the importance of trimming our fingernails. It's about eight-thirty. We've just entered the classroom following morning assembly.

I long to flee the classroom, but my bare feet are stuck to the corner where I'm cowering with my friends -- Cynthia, Janice, Margaret, Becky, and Dlayani. They too are terrified. Everyone in the classroom is terrified of the mistress when she's armed with the thick ruler. There's a larger group of pupils cowering in the opposite corner. We are like cattle afraid of being branded.

I anxiously watch the mistress when she barks each frightened pupil's name, and that pupil has to come forward and have his or her fingernails inspected to see if they are too long or have any dirt under them.

I pray that the mistress not call my name. Mama forgot to borrow a fingernail clipper from our neighbor last night to trim my long and dirty fingernails because she and Papa were fighting again, over money. Watching the mistress I can already feel the pain felt by the pupils I hear howling and shrieking about me, as in a madhouse, after being whipped.

After nearly half an hour the mistress finally calls my name. I'm one of the handful of pupils left to be inspected. I start to cry.

"Stop crying!" she barks. "Let me see your fingernails."

I gingerly step forward. I never take my eyes off the thick ruler in the mistress's right hand. I stop about two feet from the mistress and thrust my small hands tentatively forward. My fingers are bunched together with the fingertips facing up. I'm trembling in anticipation of the sting of the thick ruler. The mistress stoops, takes one look at my fingernails, and says sternly, "They're long and dirty. Now stop whining and sing the song."

I sing-sob the fingernails song. The mistress slowly raises the thick ruler -- which seems the size of a club -- high up in the air and prepares to rap my fingertips.
Nitsema minwala yikoma.

I should trim my fingernails short.

Before I even finish singing "I didn't listen," the mistress whacks my fingertips hard with the edge of the thick ruler. I howl with pain. I wish Mama would come and take me away from this horrible place called school. I wish she'd come and explain to the mistress that it's not my fault that she and Papa fought and that he drove her away from the house before she could borrow the nail clipper from the neighbor to trim my fingernails.

"Didn't I tell you last week to trim your fingernails?" the mistress says sternly.

"You did, Mistress," I sob. Marimila, mucus, streams down my flaring nostrils and mingles with the warm tears. I'm recovering from a cold. Without a handkerchief, I use my long shirtsleeve to wipe the tears and mucus.

The mistress is furious and whacks me, on the forehead. This time the blow raises a welt and I cry even harder.

I wish Mama had remembered to rip a piece from her old dress as she'd promised and made me a handkerchief. But she forgot because she and Papa fought and she had to flee to Granny's place. I wish I could tell the mistress this but I don't. I'm ashamed to tell people that my parents are always fighting.

The mistress barks Cynthia's name. Cynthia is already crying as she approaches the mistress. She gets whacked for having long, dirty fingernails. Dlayani, whose Shangaan name means "Kill me," is lucky; her fingernails are neatly trimmed. So are Janice's and Becky's.

Next the mistress inspects our hair to see if it's clean and neatly combed. A lot of children have lice and dandruff. For the hair inspection the class sings the hair song:

We should comb our hair,

so it can look beautiful.

Fortunately my nappy hair is washed and neatly combed. I escape the dual punishment of being whacked on the head with the thick ruler and then having my hair combed by the mistress, using a steel comb, which feels as though your hair is being plucked by the roots.

It is evening. I'm sitting on the kitchen floor in front of a cozy fire from a red-hot mbawula, a brazier, watching Mama cook dinner. I have no toys to play with, so I often watch Mama do chores. Our house, which overlooks a donga (gully) and a dusty street called Hofmeyer, is in yard number 47 on Thirteenth Avenue. It has two small rooms, three small windows with several broken panes, and no running water, electricity, or indoor toilet.

"Miriam," Mama turns to me and says, "take this food to your father."

She hands me a big plate to give to Papa, who is sitting impatiently at the kitchen table. As head of the household Papa gets served first, and during meals he sits alone at the table. Mama and we children sit on the bare cement floor. As I set the plate heaped with vuswa, our staple of porridge made from ground cornmeal, and marumbu, cooked chicken intestines, Papa looks at me. Something catches his eye.

"Khade hafa" -- come here -- he says in Venda. There is gentleness in his usually authoritarian voice, which reassures me that I've done nothing wrong and will not be chastised.

"Let me take a look at your forehead." I lower my head and he pulls the flickering candle closer.

par"What happened?" he asks as his fingers gently feel the welt on my forehead. I wince.

"The mistress beat me at school," I say in a contrite voice.

"For not trimming my fingernails."

Papa glares at Mama. "Didn't I tell you not to send my children to that bloody Shangaan school?" Papa bellows. "Look at what they've done to the poor child."

"There's no school for Vendas in Alexandra to send her to," Mama says, almost apologetically. She knows that Papa is opposed to our attending a school where the medium of instruction is Shangaan, my mother's language, and not Venda, his language.

"And what kind of school is it that punishes children for not trimming their fingernails?" Papa demands.

Mama doesn't answer. When I showed her the welt on my forehead and told her what had happened, she had tears in her eyes, even as she said, "Don't worry, child. As long as you're learning something it's worth it." There was nothing Mama could do, short of withdrawing me from school. Black schools had to abide by the strict discipline rules set by the Department of Bantu Education, and corporal punishment was high on the list of those rules.

But Papa doesn't care a damn about the rules. He turns to me and says, "Tomorrow I'll accompany you to school and teach that bloody mistress a lesson. I'll donder her" -- whip her good.

Papa must have spoken impulsively, for Mama smiles and says, "You forget that tomorrow is Friday. You can't miss work or you'll be fired. And what good will beating up the mistress do if the children can't eat and we are evicted?"

Papa scowls. He digs deep into the right pocket of his faded trousers and fishes out a two-cent coin. "Here, buy yourself some sweets."

"Ndi ya livuha" -- thank you -- I say gratefully, curtsying.

Papa pats me on the back of the head and tells me that I'm a good girl. I know that part of the reason he's pleased is that I always speak Venda in his presence, unlike my older siblings, who often speak Shangaan.

As Linah, Diana, and I crowd around a common plate heaped with vuswa and another one with marumbu, eating with the right hand because it is taboo to use the left to eat, I'm already dreaming of what I'm going to do with my two cents. I'm going to buy hebelungu, a subsidized lunch offered to schoolchildren by the Catholic church. It consists of two slices of brown bread smeared with peanut butter, and a mug of skim (powdered) milk. Next to fish and chips, there's nothing I find more delicious. And with food scarce at home because Papa only makes ten rand a week as a menial laborer, it helps to have at least one filling meal a day.

Mark Mathabane is the author of Kaffir Boy in America, Love in Black and White, and African Women: Three Generations.

Ken Otterbourg The Winston-Salem Journal Inspirational and often affecting...there is an important message to this story.

Glamour This memoir of growing up in South Africa during apartheid is alternately evocative and wrenching, but always inspiring....[It] captures both the brutality and beauty of their childhood.