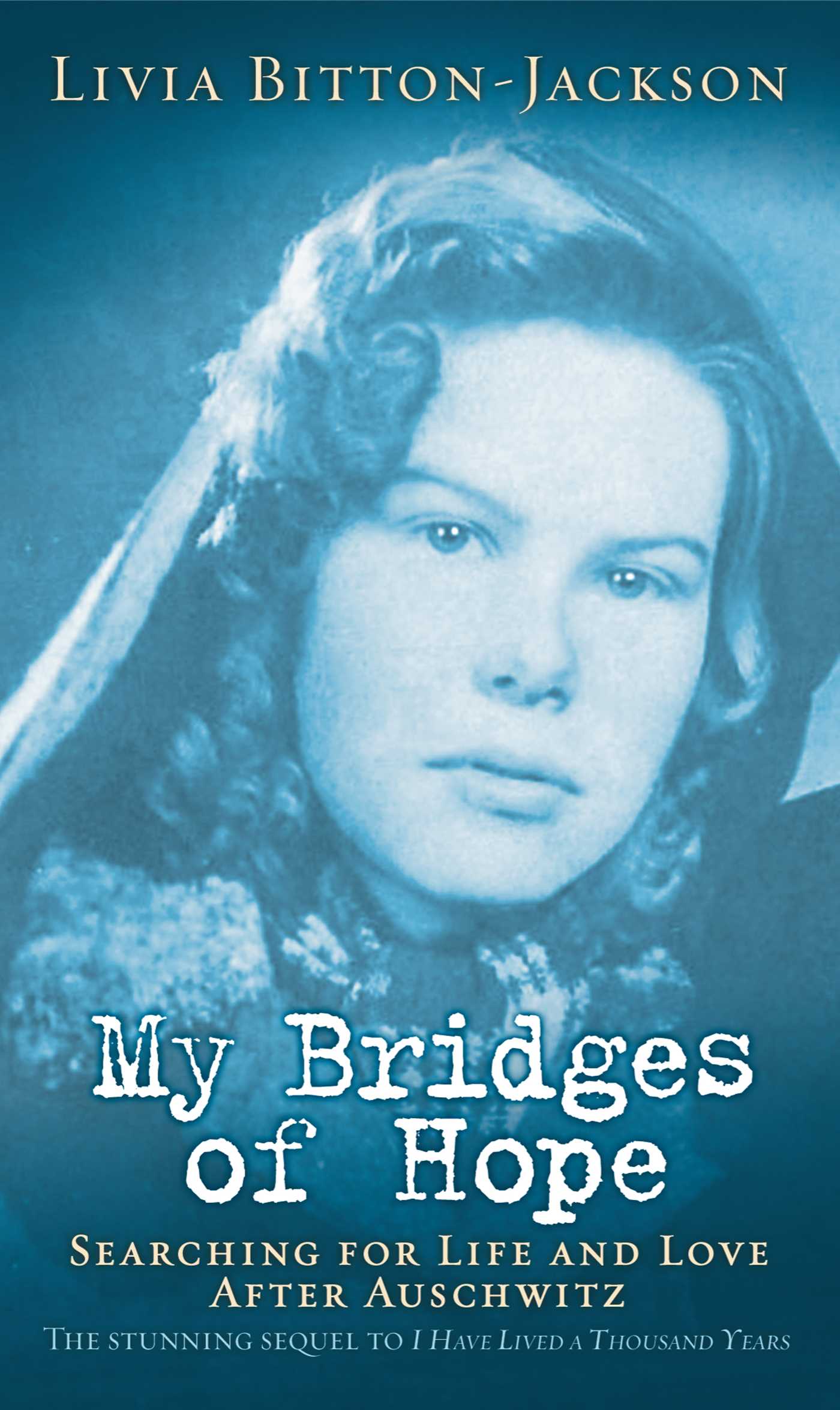 My Bridges of Hope

By Livia Bitton-Jackson
LIST PRICE $9.99
PRICE MAY VARY BY RETAILER

After liberation from Auschwitz, fourteen-year-old Elli, her brother, and their mother attempt to rebuild their lives in Czechoslovakia. But it doesn't take long for Elli to realize that even though the war is over, anti-Semitism is not, so she and her family decide to escape to America along with thousands of other Jews. Little do they know what agonies and adventures await them still.

Elli's memoir of her experiences after Auschwitz will captivate readers as they follow her through heartache, frustration, adventure, excitement, love, and ultimately, triumph.

“An exceptional story, exceptionally well told,” is how Publishers Weekly summed up I Have Lived a Thousand Years, Livia Bitton-Jackson’s memoir of coming of age in Nazi concentration camps. “A gripping story,” School Library Journal added. “A valuable addition to any Holocaust collection.” Winner of a Christopher Award and an ALA Best Book for Young Adults, the book was followed by an equally acclaimed memoir of the author’s turbulent postwar years, My Bridges of Hope. Unforgettable first hand accounts of terrible times, these two books are also ringing tributes to the human spirit.

1. Why is the title I Have Lived a Thousand Years such an apt description of Elli’s young life?

2. “I don’t know if I am proud to be a Jew,” Elli admits early in I Have Lived a Thousand Years, when she is ordered by the Nazis to wear a six-pointed star on her clothing. “I had never thought about it.” How does her religious identification change and deepen as a result of her later experiences?

4. How did the Nazis try to strip Elli and her mother of their individuality? Did they succeed? Find examples of the large and small ways that concentration camp victims maintained their humanity.

5. What were Elli’s most cherished ambitions for herself? How did she hold on to her dreams when she was in the concentration camps? Why did she so quickly dismiss Andy’s marriage proposal in Vienna? How did she fulfill her goals in adulthood?

6. In My Bridges of Hope, Elli is considered too young to fight for Israel, but old enough to be appointed a school headmistress. She wonders, “Which required greater responsibility: wielding a book, or a gun? Which is a more effective device, or more lethal weapon: a gun, or education?” What are your answers to her questions?

7. Fleeing Czechoslovakia, Elli abandoned her colleagues in Briha, the underground movement. How did she do it? Why did she? Despite several opportunities to do so, why didn’t her colleagues expose her deceit?

8. In the forward to I Have Lived a Thousand Years, the author writes that she hopes her book will be: “A lesson to help future generations prevent the causes of the twentieth-century catastrophe from being transmitted into the twenty-first.” What lessons have you learned from Elli’s story? How can you put them into action?

• Learn more about the causes and the consequences of World War II. How did Hitler come to power? Why did he hate Jews so savagely? When and why did America enter the war? What was the “cold war” that followed?

• Study the shifting map of Europe during the twentieth century. Elli’s hometown was part of Hungary during the war but part of Czechoslovakia afterwards. What other countries changed their boundaries? What countries have disappeared since the end of World War II? What new countries have emerged?

• Again and again, Elli and her family were uprooted, forced to pack their most precious belongings into small containers. Allow yourself just one suitcase. Place the objects the matter most to you into it.

• Invite an older member of your community to speak about their life during World War II. A veteran, a refugee from Europe, a working in a war-related industry, or anyone with strong memories of that extraordinary time can offer invaluable insights.

• Each book ends with a chronology of Elli’s experiences. With the help of your grandparents, or another old relative, create a personal chronology of your own family’s history from 1938 to 1951.


This guide has been provided by Simon & Schuster for classroom, library, and reading group use. It may be reproduced in its entirety or excerpted for these purposes.
Livia Bitton-Jackson

Livia Bitton-Jackson, born Elli L. Friedmann in Czechoslovakia, was thirteen when she, her mother, and her brother were taken to Auschwitz. They were liberated in 1945 and came to the United States on a refugee boat in 1951. She received a PhD in Hebrew culture and Jewish history from New York University. Dr. Bitton-Jackson has been a professor of history at City University of New York for thirty-seven years. Her previous books include Elli: Coming of Age in the Holocaust, which received the Christopher Award, the Eleanor Roosevelt Humanitarian Award, and the Jewish Heritage Award. Dr. Bitton-Jackson lives in Israel with her husband, children, and grandchildren.

My Bridges of Hope

By Livia Bitton-Jackson
LIST PRICE $9.99
PRICE MAY VARY BY RETAILER