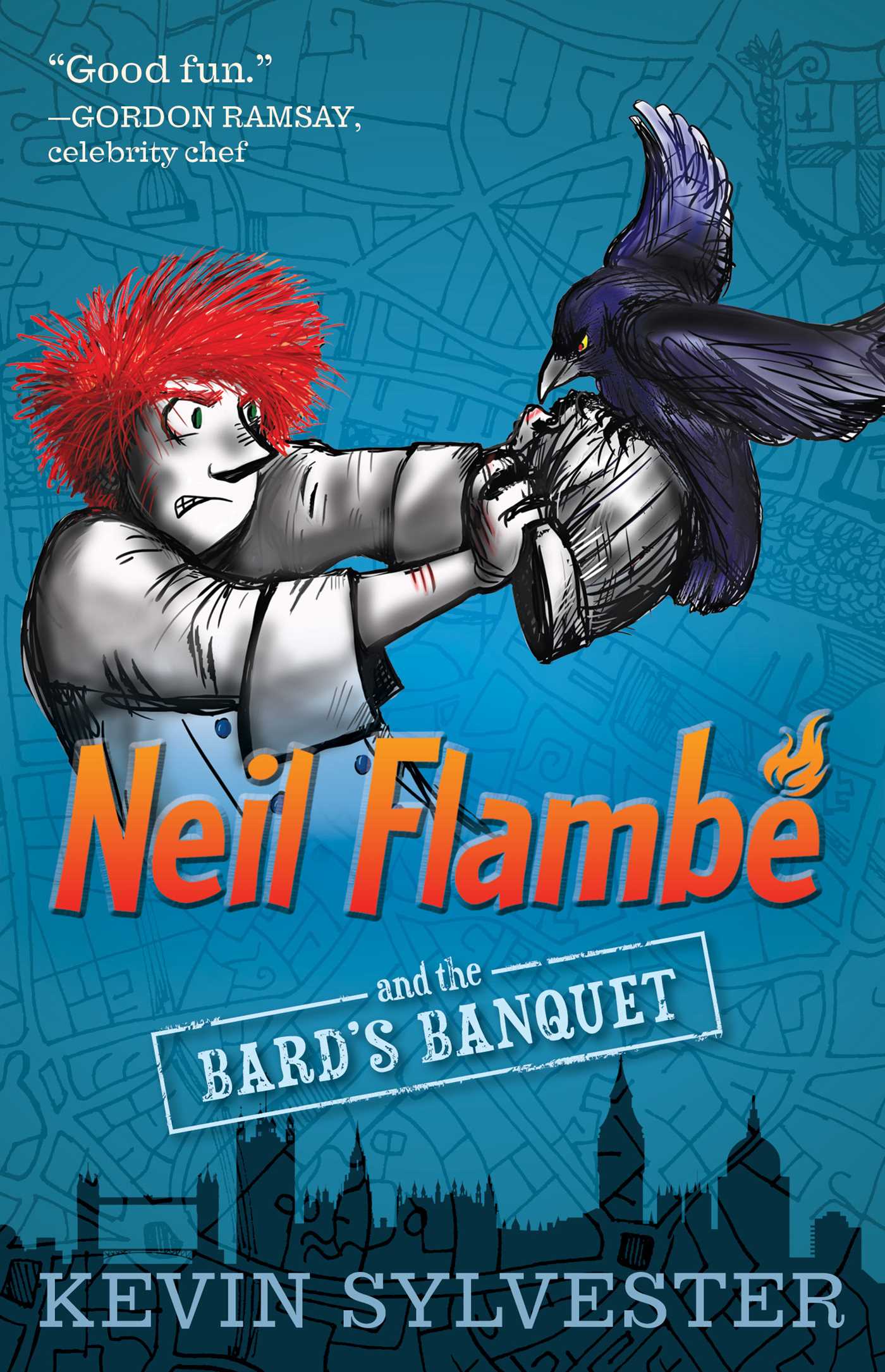 Neil Flambé and the Bard's Banquet

Neil, “the flamboyant, irrepressible chef” (Kirkus Reviews), travels across the pond for a real honey of a case in the fifth book in The Neil Flambé Capers, the culinary mystery series celebrity chef Gordon Ramsey calls “good fun.”

Neil Flambé has had enough with solving crime. After his adventures in Japan, he is back in his beloved restaurant doing what he does best—cooking. And he has a very special guest. Lord Lane from England has requested he serve a meal centered around an ancient jar of honey discovered in London. But when Lane disappears afterward, Neil receives a request from the Queen herself to come across the pond and find out what happened to him.

As soon as Neil arrives, he is swept up in a mystery involving the great works of Shakespeare and food. Neil may know quite a bit about the latter, but being chased by thugs through the streets of London and following centuries-old clues is not exactly his forte. Will Neil be able to put the pieces together in time or will he let everyone down, including the Queen?

Of course, he’d just been hitting it with a frying pan, so that made sense.

What didn’t make sense—to Neil, anyway—was the antique jar of honey that sat on the kitchen counter, facing Neil with a suspicious attitude.

Lord Lane of Liverpool had uncovered a case of the honey during a recent building demolition—or, more precisely, his workers had—and he was asking fifteen-year-old super-chef Neil Flambé to cook him a meal using the ingredient.

The problem wasn’t the honey. Neil could have cooked an amazing meal with the jar itself, if that’s what Lane had wanted. The problem was the scroll of paper suspended inside the jar.

When the case of honey had arrived, Neil’s cousin Larry had held one jar up to the light to get a closer look inside. The sunlight had revealed a note that said, or seemed to say, help. A cry for help, even from the distant past, was the last thing Neil wanted to hear after months of globe-trotting battles and mystery solving.

“Are you done banging your head?” Larry asked, smiling and walking over to Neil. “A little dramatic, even for you.”

Neil moaned. “I want to be a chef, not a private eye.”

“Whatever! The point is that I just want to run my restaurant.”

“And do your homework on time.”

“And do my—wait, no, just run the restaurant, in peace for a change. That would be nice!” Neil bellowed, lifting himself off his chair. The movement made his head throb again. He sat down and rubbed his temples and moaned some more. “I’m done with solving crimes. Tell Lord Lane he can have his honey back and can find someone else to cook him dinner.”

“Chill, cuz! I only said that the note looks like it spells ‘help,’?” Larry said. “There’s a whole roll of paper in there. Maybe it says ‘help is on the way’ or ‘honey will help cure your gout’ or something like that.”

“Have I mentioned that Lane is practically royalty?”

Neil actually snorted. “Royalty? Look at what Japanese royalty almost did to us!” The Flambés had just returned from a scary few weeks in Tokyo that had almost killed them in a number of different ways. For a while, Neil had been sure Larry had been killed.

“Did I mention that he’s rich? You could buy some nice new frying pans to hit your head with!”

Neil hesitated for a moment, then shook his head. “Nope, I still don’t care.”

“And did I mention that I already accepted the down payment for the dinner?”

“What?” Neil said, straightening up. “You didn’t ask me first?”

Larry grinned sheepishly. “It was sort of a last-minute kind of thing. He’s already in town for some play or something. And I thought you’d be intrigued. He could have asked any chef, but he chose you. He clearly wanted the best. That’s you, isn’t it?”

Neil had to admit this was true. His ego started to wake up, fighting with the pain and exhaustion and beating them both into submission. Neil stole a glance at the jars of honey. The honey glowed like gold in the sunlight.

“All right, look,” Neil said finally, standing up and wagging his finger at Larry. “I’ll cook this meal, but we don’t use that jar of honey. It stays closed. Deal?”

“Deal,” Larry said. “We just hand it to him after dinner and then forget it ever passed through our kitchen.”

“Right,” Neil said. “And if Lord Lane wants to know why some long-dead Victorian guy needed help, then he can find out himself.”

Even Neil suspected this wasn’t going to be the end of the story, but he stashed that suspicion in the back of his much-better-all-of-a-sudden head and started to actually think about planning his glorious meal.

“Okay, honey is an amazing ingredient in any number of dishes.” Neil walked over to the counter and examined the unopened jars. They were made out of glass, with each top sealed with a ceramic lid coated with a thick layer of beeswax.

“Let’s see how this all tastes, and then I’ll make Lane’s taste buds implode.”

Larry rolled his eyes. He carefully took the jar containing the note and placed it on a high shelf. “Stay,” he said, pointing angrily at the jar.

Neil took a knife and carefully began prying the top off one of the remaining jars.

“Honey can last for centuries without going bad,” Neil said, “as long as it’s properly sealed.”

He carefully cut a slit around the lip of the jar and then gingerly maneuvered the blade between the lid and the glass. He needed to be very careful. Old glass was fragile, and he didn’t want to be stuck figuring out what was a crystallized bit of golden honey and what was a shard of glass.

He cracked the seal. The pungent aroma of honey swelled his senses.

“Wonderful.” Neil smiled. He took a deeper sniff. “And weird.” He sniffed the honey again. It smelled, there was no other word for it, pure. He could detect the powerful aromas of numerous flowers, and just the faintest trace of smokiness. “Definitely weird.”

“Well, from what I know about Victorian London, it was a pretty dirty place. There were lots of factories and stuff, burning a lot of coal. I should smell that in this honey.”

Larry gave a gasp of astonishment. “You have been doing your homework!”

“Well, actually, I have b—” Neil was just about to accept this pat on the back, when he was interrupted by a derisive laugh from the kitchen door.

Isabella Tortellini made her way into the kitchen. Her left arm was still in a sling, a result of a bullet wound she’d suffered in Japan. Neil noticed that even her sling seemed to be made of some exotic and wonderful fabric.

“Ah, speaking of honey, here’s your very own sweetie!” Larry said with a chuckle. “And so stylish! You should get shot more often.”

“Sei un buffone! You are such a clown,” Isabella said.

Neil felt his face redden, a little with embarrassment but more with pleasure. Isabella was definitely his “sweetie” (just as Larry was definitely a clown).

Larry smiled. “I believe you were about to suggest that our young chef is lying about doing his homework?”

“Homework?” She raised an eyebrow and looked at Neil, who squirmed.

“Actually, Isabella was telling me about the origins of modern perfume making the other day. For a book report . . .”

“Okay, an overdue history assignment on the Industrial Revolution.”

Neil continued. “Perfumes helped the rich and not-so-rich cover up the smells of city living and coal dust. It was kind of ironic that the factories allowed them to make enough to satisfy demand, while also making the smells that needed covering.”

Isabella had very deftly used her one good arm to grab and twist a tea towel and whack Larry on the rear end with the tip.

“I am sweet like honey, but I also sting like un’ape, a bee,” she said, touching her forehead with her finger. “Remember that.”

“More like a vespa!” Larry said, sidling a step away.

“Sì, more like a wasp,” she said, smiling. “My arm is almost healed, then watch out! See, I do not need a bodyguard all the time!”

“Speaking of which, where is the human tank?” Larry asked. Jones, Isabella’s friend and bodyguard, was usually hovering close by.

“He is in the car. We are leaving for France tonight for a very big perfume convention. I will return very rich.”

“Anyway, Neil, you were explaining about il miele, the honey?” Isabella said, gliding over and giving Neil a kiss on the cheek.

Neil smiled dumbly for a second, then continued. “Well, I’d expect that this honey would smell way more, I don’t know, dirty or sooty.”

Larry laughed. “And you say you don’t like mysteries!”

Neil put the honey down abruptly. “I don’t. This is about cooking. Flavor undertones, hidden things like smoke or soot, can affect the type of dishes I can cook with honey. This honey doesn’t have any of those. It’s incredibly pure.”

“So. What do you have planned?” Isabella said, leaning closer to him. She loved watching Neil work.

Neil felt a thrill as he stared into her chocolate-colored eyes. “Um, uh . . . well, there are a few standard things. Lane is British, which means he’ll probably love meats, pastries. I’m looking at some simple recipes and fresh ingredients.”

Neil’s mind was racing now as he began to construct combinations of flavor and texture out of thin air. His hands flew around as he mixed the imaginary ingredients.

“I’ll start with an appetizer that plays on the idea of crumpets, with honey-glazed cakes. It’s more of a baklava but with an infusion of Earl Grey tea. Not too sweet, just sweet enough to set the tone for the evening.”

“British with a twist,” Larry said.

Neil raced on. “Main course? Honey-glazed ham, but deconstructed as a kind of almost bacon-flavored meat pie—or! Or maybe as a kind of charcuterie plate!” Neil was speaking more quickly with each possibility. “Then dessert will be a selection of cheeses, but with honey-baked toasts, some honey ice cream, and then a honey trifle.”

Larry jumped to his feet and clapped his hands. “And you didn’t once mention fish! What are we waiting for? Let’s start prepping!”

“The constant suspense, innocent romance, a lovely recipe for scones, and the flamboyant, irrepressible chef will captivate fans of the series and impel new readers to the nearest bookstore or library.”

Neil Flambé and the Bard's Banquet