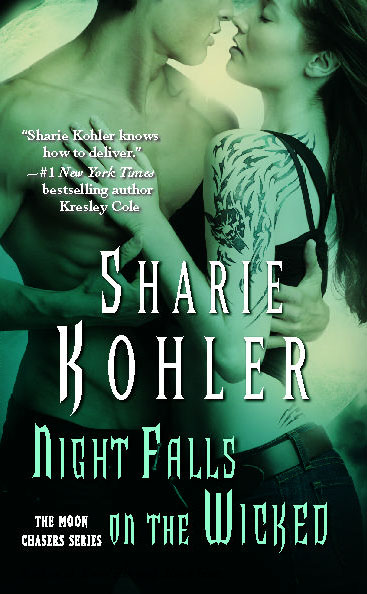 Night Falls on the Wicked

Darby has spent the last three years of her life running from the demons that seek to possess her. She’s walked away from all friends and family for fear that she will drag them too close to the danger forever nipping her heels. As a white witch, demons seek to possess her and use her as Satan’s instrument on earth. Determined to never be a device for evil, she lives life below the radar and stays one step ahead of the evil hunting her. Except there’s more than one evil lurking in the shadows….On sale: August 30, 2011

She stood in shadows at the foot of the bed, staring down at the sleeping figure. At sixteen, he was almost a man, but still a boy in so many ways. Always her boy, her son, her baby. A lump thickened her throat and she fought to swallow it down.

He slept fitfully, tossing and turning, sweat glistening on his face, visible even in the room’s dull glow. The source of that glow could be seen through the window. It repelled her … made her slightly ill. She moved toward the window, her steps creaking over the wooden floor. She grasped the curtains in both hands and pulled the fabric tightly shut as if she could block out that waxing moon. Hide it from view. Forget what it meant, the power it now held over her son.

Her hands lingered on the soft cotton, caressing the fabric for a moment until sliding away. She remembered selecting the curtains years ago. The puppies chasing red balls still made her smile. Of course, he had been complaining about them for some time now, arguing that a boy his age needed more manly curtains. Her response had been to laugh, ruffle his hair and tell him he would always be her baby. Nothing would ever change that. Her hands curled into fists, her nails cutting into her tender palms. Nothing. Now more than ever she had to be a good mother to him.

It had been just the two of them for so long now. His father was gone. He’d passed in and out of her life so swiftly that memories of him were dim. A man with a rumbling laugh, wicked smile and broad hands that she could hold and stroke and stare at for hours. Niklas remembered nothing of him at all, which was just as well. She’d worked hard over the years to make sure he never felt the lack of a father in his life.

Niklas was her world. And she was his. The realization created a deep gnawing pang in her chest. It was going to be hard for him, but he was young. He’d overcome. He’d grow into a strong man and move on. He’d be fine without her.

She rounded the bed. Her hand shook as she lowered it to his head and brushed the silken hair—almost as though she had never touched him before. Except she had done so every day for the last sixteen years. As her fingers slid the hair back from his feverish skin, she confronted the harsh reality that this would be her last time to touch him. A sob caught in her throat but she held it back, determined not to wake him. Determined that he not know what she was about until it was too late. Until it was done.

Bending, she pressed trembling lips to his cheek. The white bandage peeked out from the edge of his shirt, a painful reminder. Beneath that bandage lay torn flesh that she’d cleaned and cared for the best she could. Not that her efforts made any difference. Raw and ravaged tonight, it would probably be gone tomorrow, miraculously healed. All evidence of his attack would be gone.

She stroked his cheek, trying to memorize the texture, everything about him—enough to make it last. His skin still felt smooth and soft as always, even dangerously warm as he was. The fever was the curse, working its way through him, killing him off bit by bit until only a ghost of him would remain. She wouldn’t have that. No matter the cost. It would not come to be.

And he would, she vowed as she moved from the bed and slipped silently from the room. No matter the price to herself. She’d do what needed to be done. Her son would wake in the morning himself again. Whole and safe.

She, however, would wake far, far from here. And she’d wake as something else. Something without a chance … without any hope. 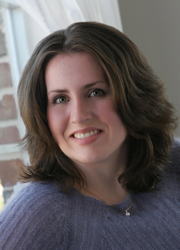 Night Falls on the Wicked