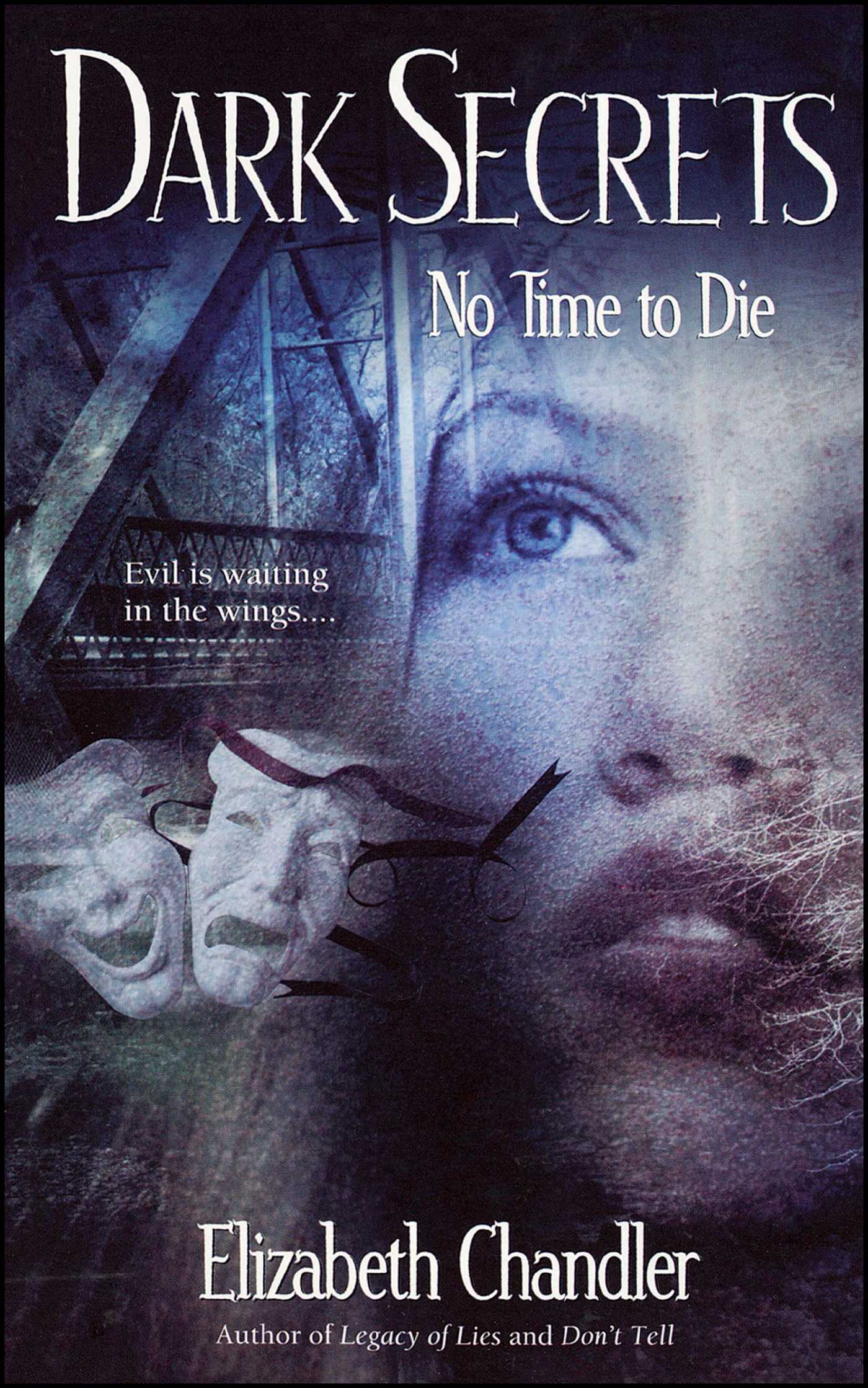 No Time to Die

Message from a dead girl...
It's too late to call back. Jenny will never speak to Liza again. But it seems that even from beyond the grave, Liza is begging her sister for help....
They say it's a serial killer. Is it? Jenny can't afford to trust anyone. Now she's here, in Wisteria, anonymously registered at the Chase College theater camp where her sister died. The daughter of a famous theatrical family, Jenny distrusts actors, loathes acting. Yet here in the college's darkened theatre, Liza seems to be speaking to her. Suddenly Jenny is mouthing Liza's last lines, sharing Liza's last days, a drama starring Brian, the stage manager, who seems to follow her everywhere...dangerously attractive Mike...Paul, who was obsessed with Liza...motherly, suffocating assistant director Maggie...and Walker, the director, bristling with hostility and resentment against Liza and Jenny's famous father. Does he suspect Jenny's true identity?
How can anyone know the visions that may be driving Jenny straight into the killer's arms?

Jenny? Jenny, are you there? Please pick up the phone, Jen. I have to talk to you. Did you get my e-mail? I don't know what to do. I think I'd better leave Wisteria.

Jenny, where are you? You promised you'd visit me. Why haven't you come? I wish you'd pick up the phone.

Okay, listen, I have to get back to rehearsal. Call me. Call me soon as you can.

I retrieved my sister's message about eleven o'clock that night when I arrived home at our family's New York apartment. I called her immediately, if somewhat reluctantly. Liza was a year ahead of me, but in many ways I was the big sister, always getting her out of her messes -- and she got in quite a few. Thanks to her talent for melodrama, my sister could turn a small misunderstanding in a school cafeteria into tragic opera.

Though I figured this was one more overblown event, I stayed up till two A.M., dialing her cell phone repeatedly. Early the next morning I tried again to reach her. Growing uneasy, I decided to tell Mom about the phone message. Before I could, however, the Wisteria police called. Liza had been found murdered.

Eleven months later Sid drove me up and down the tiny streets of Wisteria, Maryland. "I don't like it. I don't like it at all," he said.

"I think it's a pretty town," I replied, pretending not to understand him. "They sure have enough flowers."

"You know what I'm saying, Jenny."

Sid was my father's valet and driver. Years of shuttling Dad back and forth between our apartment and the theater, driving Liza to dance and voice lessons and me to gymnastics, had made him part of the family.

"Your parents shouldn't have let you come here, that's what I'm saying."

"Chase College has a good summer program in high school drama," I pointed out.

"You change? You're the steadiest, most normal person in your family."

I laughed. "Given my family, that's not saying much."

My father, Lee Montgomery, the third generation of an English theater family, does everything with a flair for the dramatic. He reads grocery lists and newspaper ads like Shakespearean verse. When he lifts a glass from our dishwasher to see if it's clean, he looks like Hamlet contemplating Yorick's skull. My mother, the former Tory Summers, a child and teen star who spent six miserable years in California, happily left that career and married the next one, meaning my father. But she is still an effusive theater type -- warm and expressive and not bound by things like facts or reason. In many ways Liza was like Mom, a butterfly person.

I have my mother's red hair and my father's physical agility, but I must have inherited some kind of mutated theater gene: I get terrible stage fright.

"I don't think it's safe here," Sid went on with his argument.

"The murder rate is probably one tenth of one percent of New York's," I observed. "Besides, Sid, Liza's killer has moved north. New Jersey was his last hit. I bet he's waiting for you right now at the Brooklyn Bridge."

Sid grunted. I was pretty sure I didn't fool him with my easy way of talking about Liza's murderer. For a while it had helped that her death was the work of a serial killer, for the whole idea was so unreal, the death so impersonal, I could keep the event at a distance -- for a while.

Sid pulled over at the corner of Shipwrights Street and Scarborough Road, as I had asked him to, a block from the college campus. Before embarking on this trip I had checked out a map of Maryland's Eastern Shore. Wisteria sat on a piece of land close to the Chesapeake Bay, bordered on one side by the Sycamore River and on the other two by large creeks, the Oyster and the Wist. I had plotted our approach to the colonial town, choosing a route that swung around the far end of Oyster Creek, so we wouldn't have to cross the bridge. Liza had been murdered beneath it.

Sid turned off the engine and looked at me through the rearview mirror. "I've driven you too many years not to get suspicious when you want to be left off somewhere other than where you say you're going."

I smiled at him and got out. Sid met me at the back of the long black sedan and pulled out my luggage. It was going to be a haul to Drama House.

"So why aren't I taking you to the door?"

"I told you. I'm traveling incognito."

He rolled his eyes. "Like I'm famous and they'll know who you are when they see me dropping you off. What's the real reason, Jenny?"

"I just told you -- I don't want to draw attention to myself."

In fact, my parents had agreed to let me attend under a different last name. My mother, after recovering from the shock that I wanted to do theater rather than gymnastics, had noted that the name change would reduce the pressure. My father thought that traveling incognito bore the fine touch of a Shakespearean romance.

They were less certain about my going to the town of Wisteria, to the same camp Liza had. But my father was doing a show in London, and I told them that, at seventeen, I was too old to hang out and do nothing at a hotel. Since I had never been to Wisteria, it would have fewer memories to haunt me than our New York apartment and the bedroom I had shared with Liza.

I put on my backpack and gave Sid a hug. "Have a great vacation! See you in August."

Tugging on the handle of my large, wheeled suitcase, I strode across the street in the direction of Chase campus, trying hard not to look at Sid as he got in the car and drove away. Saying goodbye to my parents at the airport had been difficult this time; leaving Sid wasn't a whole lot easier. I had learned that temporary goodbyes can turn out to be forever.

I dragged my suitcase over the bumpy brick sidewalk. Liza had been right about the humidity here. At the end of the block I fished an elastic band from my backpack and pulled my curly hair into a loose ponytail.

Straight ahead of me lay the main quadrangle of Chase College, redbrick buildings with steep slate roofs and multipaned windows. A brick wall with a lanterned gate bordered Chase Street. I passed through the gate and followed a tree-lined path to a second quad, which had been built behind the first. Its buildings were also colonial in style, though some appeared newer. I immediately recognized the Raymond M. Stoddard Performing Arts Building.

Liza had described it accurately as a theater that looked like an old town hall, with high, round-topped windows, a slate roof, and a tall clock tower rising from one corner. The length of the building ran along the quad, with the entrance to the theater at one end, facing a parking lot and college athletic fields.

I had arrived early for our four o'clock check-in at the dorms. Leaving my suitcase on the sidewalk, I climbed the steps to the theater. If Liza had been with me, she would have insisted that we go in. Something happened to Liza when she crossed the threshold of a theater?it was the place she felt most alive.

Last July was the first time my sister and I had ever been separated. After middle school she had attended the School for the Arts and I a Catholic high school, but we had still shared a bedroom, we had still shared the details of our lives. Then Liza surprised us all by choosing a summer theater camp in Maryland over a more prestigious program in the New York area, which would have been better suited to her talent and experience. She was that desperate to get away from home.

Once she got to Wisteria, however, she missed me. She e-mailed every day and begged me to come and meet her new friends, especially Michael. All she could talk about was Michael and how they were in love, and how this was love like no one else had ever known. I kept putting off my visit. I had lived so long in her shadow, I needed the time to be someone other than Liza Montgomery's sister. Then suddenly I was given all the time in the world.

For the last eleven months I had struggled to concentrate in school and gymnastics and worked hard to convince my parents that everything was fine, but my mind and heart were somewhere else. I became easily distracted. I kept losing things, which was ironic, for I was the one who had always found things for Liza.

Without Liza, life had become very quiet, and yet I knew no peace. I could not explain it to my parents -- to anyone -- but I felt as if Liza's spirit had remained in Wisteria, as if she were waiting for me to keep my promise to come.

I reached for the brass handle on the theater door and found the entrance unlocked. Feeling as if I were expected, I went in.

Elizabeth Chandler is a pseudonym for Mary Claire Helldorfer. She is the author of the Kissed by an Angel and Dark Secrets series. She lives in Baltimore, Maryland.

No Time to Die