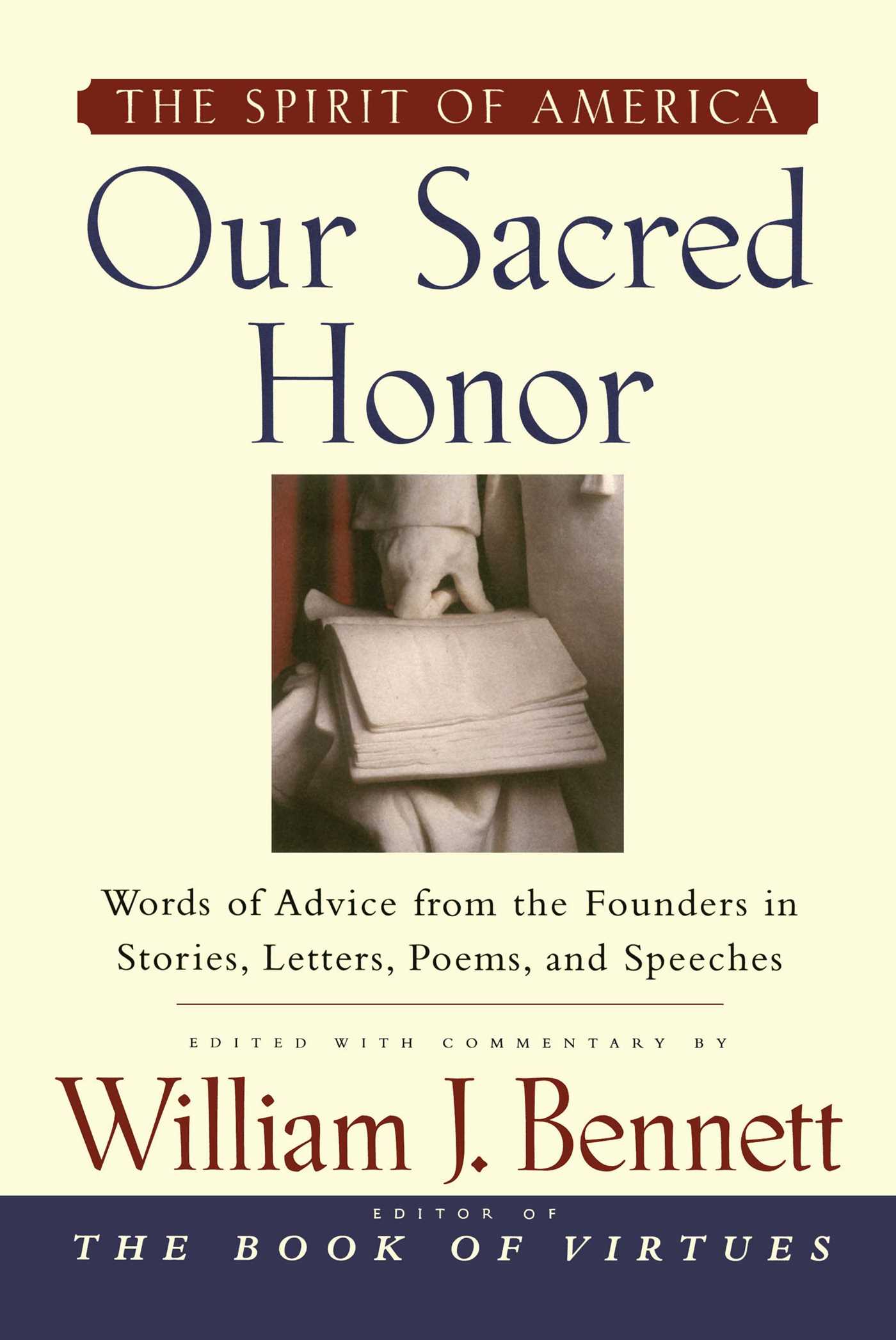 Millions of American families have turned to The Book of Virtues and The Moral Compass by William J. Bennett for moral guidance in troubled times. Our Sacred Honor offers inspiration and instruction as well...this time of a particularly American sort.

The lessons it contains are especially welcome. We live in a time when the practice of representative government in the United States of America is under siege from both the left and the right. Scandals abound. We are first shocked, then wearied, to learn that our national leaders have feet of clay. We live in a time, in short, which demands that we return to our origins to discover the common principles that make us essentially American. Our Sacred Honor reveals those common principles. They are articulated by the flawed but deeply admirable men and women who first wrote what it is to be American. The pledge made by the Founders to one another that hot July day in 1776the pledge of "our lives, our fortunes, and our sacred honor"has been redeemed many times in the centuries since, but the nation they founded has never failed to profit from their example.

It is time to profit from their advice.

In Our Sacred Honor, William J. Bennett has collected the best that has been thought and said by and about the men and women who founded America. And what a group they are: George Washington, Thomas Jefferson, James Madison, Benjamin Franklin, Alexander Hamilton, John and Abigail Adams, and so many more that otherwise first-rate intellects such as John Dickinson, Benjamin Rush, and George Mason are relegated to the status of footnotes in the popular imagination. Not since Periclean Athens has such a small nation been led by so many larger-than-life figures. The only characteristic they shared more widely than revolutionary ardor was their talent (and inclination) for advice. Here is that advice on virtually every aspect of "the good"good government, good relations between individuals and nations, and what it means to live a good life. Here are Thomas Jefferson on piety ("Adore God. Murmur not at the ways of Providence"); James Madison on justice ("It ever has been, and ever will be pursued, until it be obtained, or until liberty be lost in the pursuit"); and Patrick Henry on patriotism ("Is life so dear, or peace so sweet, as to be purchased at the price of chains and slavery?"). Here are Abigail Adams on love ("When he is wounded, I bleed..."); Benjamin Franklin on industry ("Have you somewhat to do tomorrow, do it today"); and George Washington on friendship ("Be courteous with all, but intimate with few"). Here are the lyrics to "Yankee Doodle," Longfellow's celebration of the midnight ride of Paul Revere, and the Declaration of Independence. Here are the stories of the Liberty Bell, Washington at Valley Forge, and Nathan Hale. Here are selections from The Federalist Papers, and Ralph Waldo Emerson's "Concord Hymn," with "the shot heard round the world." Here are Poor Richard's Almanack, the extraordinary correspondence between John and Abigail Adams, and George Washington's Farewell Address.

The stories, songs, letters, and speeches collected in Our Sacred Honor are an inspiring celebration of American exceptionalism, produced by a collection of exceptional Americans. It is the best book of advice in more than two hundred years.