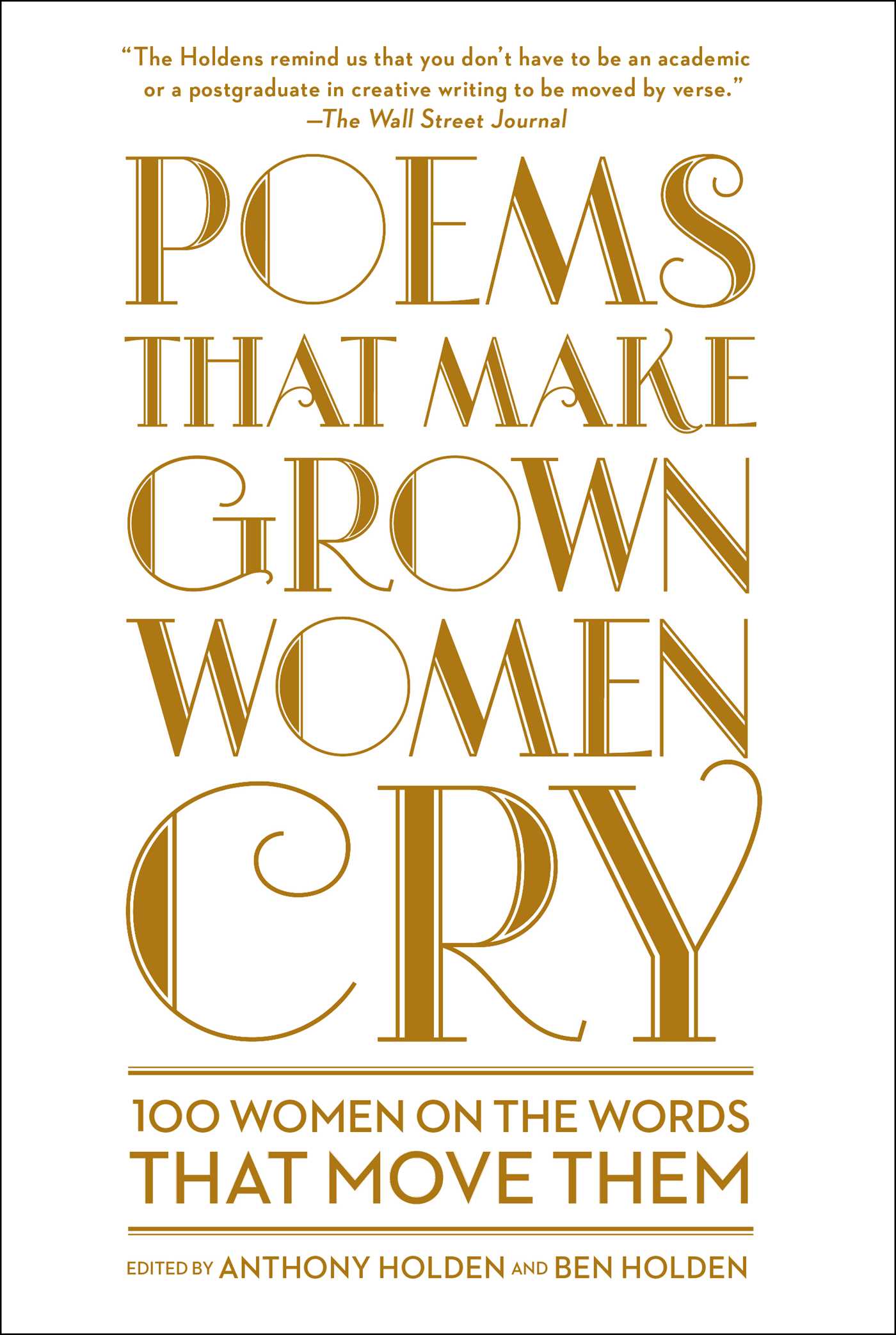 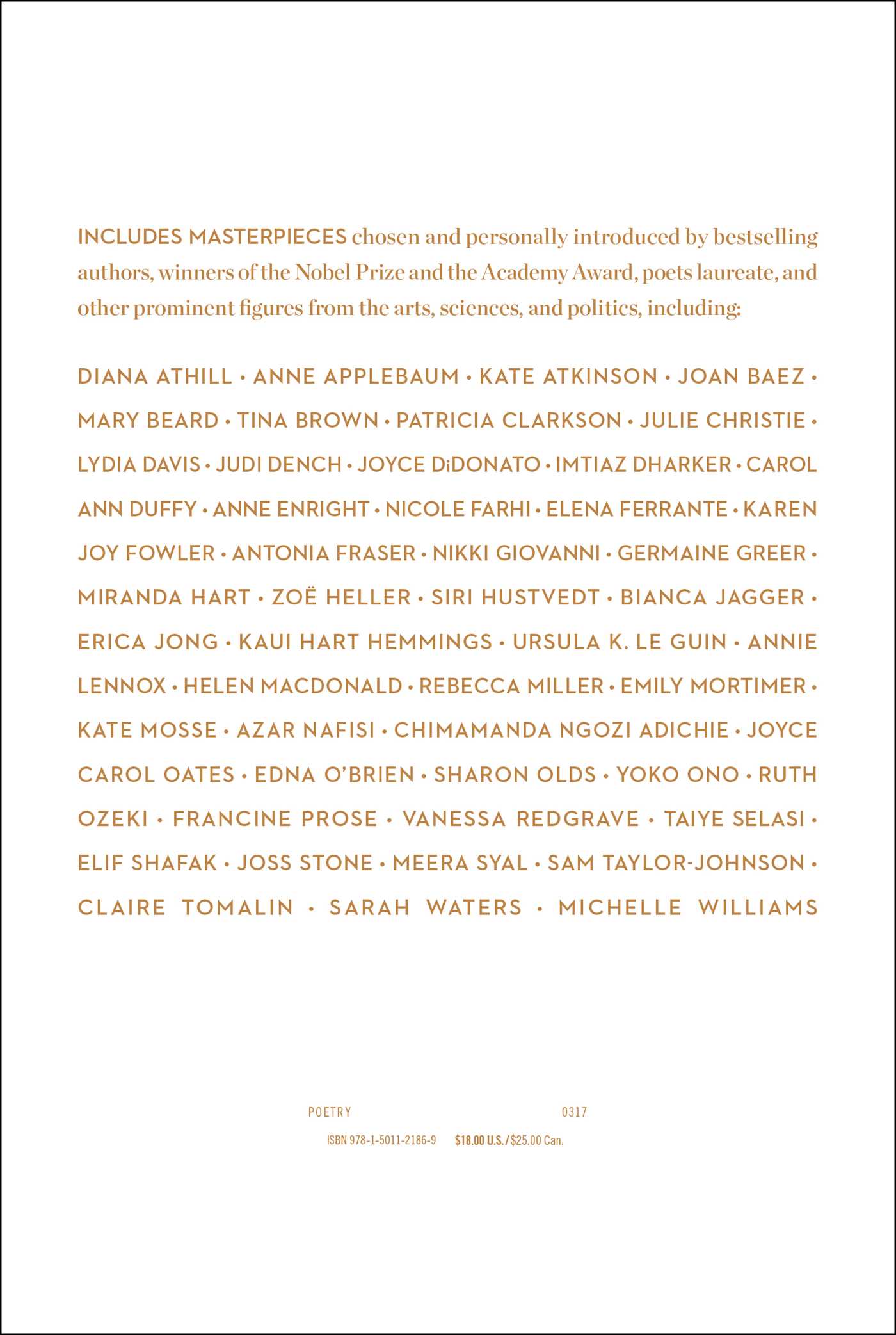 The internationally bestselling collection of poetry so powerful that it has moved readers to tears. “Anthony and Ben Holden remind us that you don’t have to be an academic or a postgraduate in creative writing to be moved by verse” (The Wall Street Journal).

One hundred women—distinguished in literature and film, science and law, theater and human rights—share poems that have stayed with them long after reading. The poems here range from the eighth century to today, from Rumi and Shakespeare to Sylvia Plath, W.H. Auden to Carol Ann Duffy, Pablo Neruda, and Derek Walcott to Imtiaz Dharker and Warsan Shire. Their themes range from love and loss, through mortality and mystery, war and peace, to the beauty and variety of nature. From Yoko Ono to Judi Dench, Chimamanda Ngozi Adichie to Elena Ferrante, Tina Brown, Michelle Williams, and Sarah Waters to Kaui Hart Hemmings and Joan Baez to Nikki Giovanni, this unique collection delivers private insights into the minds of women whose writing, acting, and thinking are admired around the world. Their selections include classics by visionaries, such as Emily Dickinson, Walt Whitman, and Pablo Neruda as well as contemporary works by masters, including Seamus Heaney, Adrienne Rich, and Warsan Shire, with introductions to their work as powerful as the poems themselves.

Poems That Make Grown Women Cry is a collection which represents a variety of aesthetic sensibilities and the full spectrum of human emotion. It is also a reminder of how poetry can touch minds and hearts, and how easily it will do so for readers of all stripes if they turn the first page.

‘Donal Og’ is recited in John Huston’s last film The Dead. After watching that movie as a teenager I then found the same poem in an anthology, The Rattle Bag, edited by Ted Hughes and Seamus Heaney. This was all pre-Google searches, of course, so it seemed like a spectacular coincidence to hear and read this poem twice in the same year, without knowing who wrote it or where it came from.

It has since become quite popular; I saw it in the literary supplement of a newspaper and then heard it read beautifully on Roger McGough’s Radio 4 programme Poetry Please.

I still find it just as affecting now as I did at sixteen. More so, in fact.

It is late last night the dog was speaking of you;

the snipe was speaking of you in her deep marsh.

It is you are the lonely bird through the woods;

and that you may be without a mate until you find me.

You promised me, and you said a lie to me,

that you would be before me where the sheep are flocked;

I gave a whistle and three hundred cries to you,

and I found nothing there but a bleating lamb.

You promised me a thing that was hard for you,

a ship of gold under a silver mast;

twelve towns with a market in all of them,

and a fine white court by the side of the sea.

You promised me a thing that is not possible,

that you would give me gloves of the skin of a fish;

that you would give me shoes of the skin of a bird;

and a suit of the dearest silk in Ireland.

When I go by myself to the Well of Loneliness,

I sit down and I go through my trouble;

when I see the world and do not see my boy,

he that has an amber shade in his hair.

It was on that Sunday I gave my love to you;

the Sunday that is last before Easter Sunday

and myself on my knees reading the Passion;

and my two eyes giving love to you for ever.

My mother has said to me not to be talking with you today,

or tomorrow, or on the Sunday;

it was a bad time she took for telling me that;

it was shutting the door after the house was robbed.

My heart is as black as the blackness of the sloe,

or as the black coal that is on the smith’s forge;

or as the sole of a shoe left in white halls;

it was you put that darkness over my life.

you have taken what is before me and what is behind me;

and my fear is great that you have taken God from me! 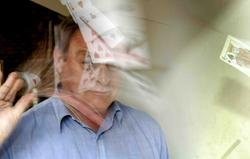 Anthony Holden is an award-winning journalist who has published more than thirty books, including He Played For His Wife…And Other Stories and biographies of Laurence Olivier, Tchaikovsky, and Shakespeare. He has published translations of opera, ancient Greek plays, and poetry. He was director of European Film and Television at Exclusive Media, where he helped relaunch Britain’s most famous film production label, Hammer. Anthony Holden lives in London. 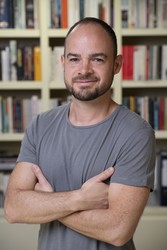