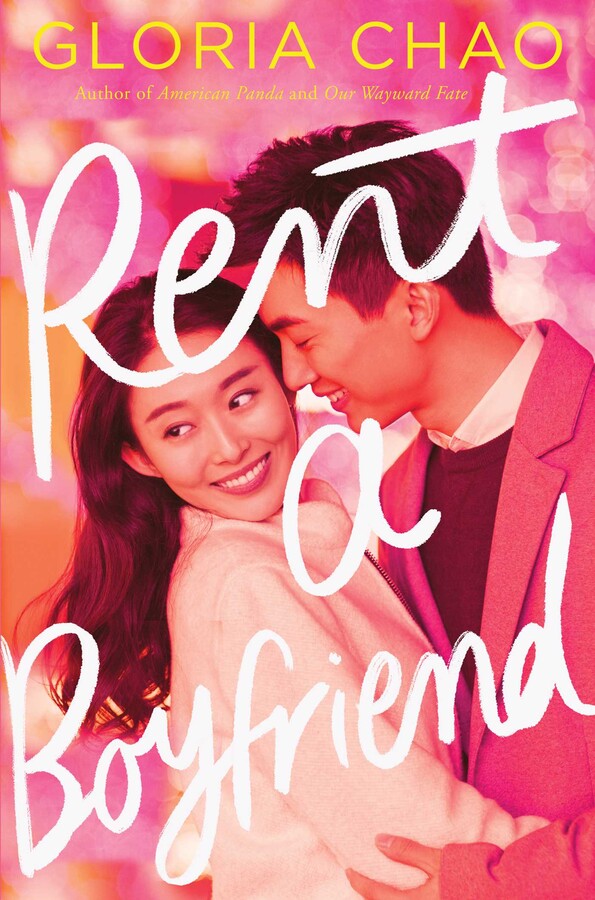 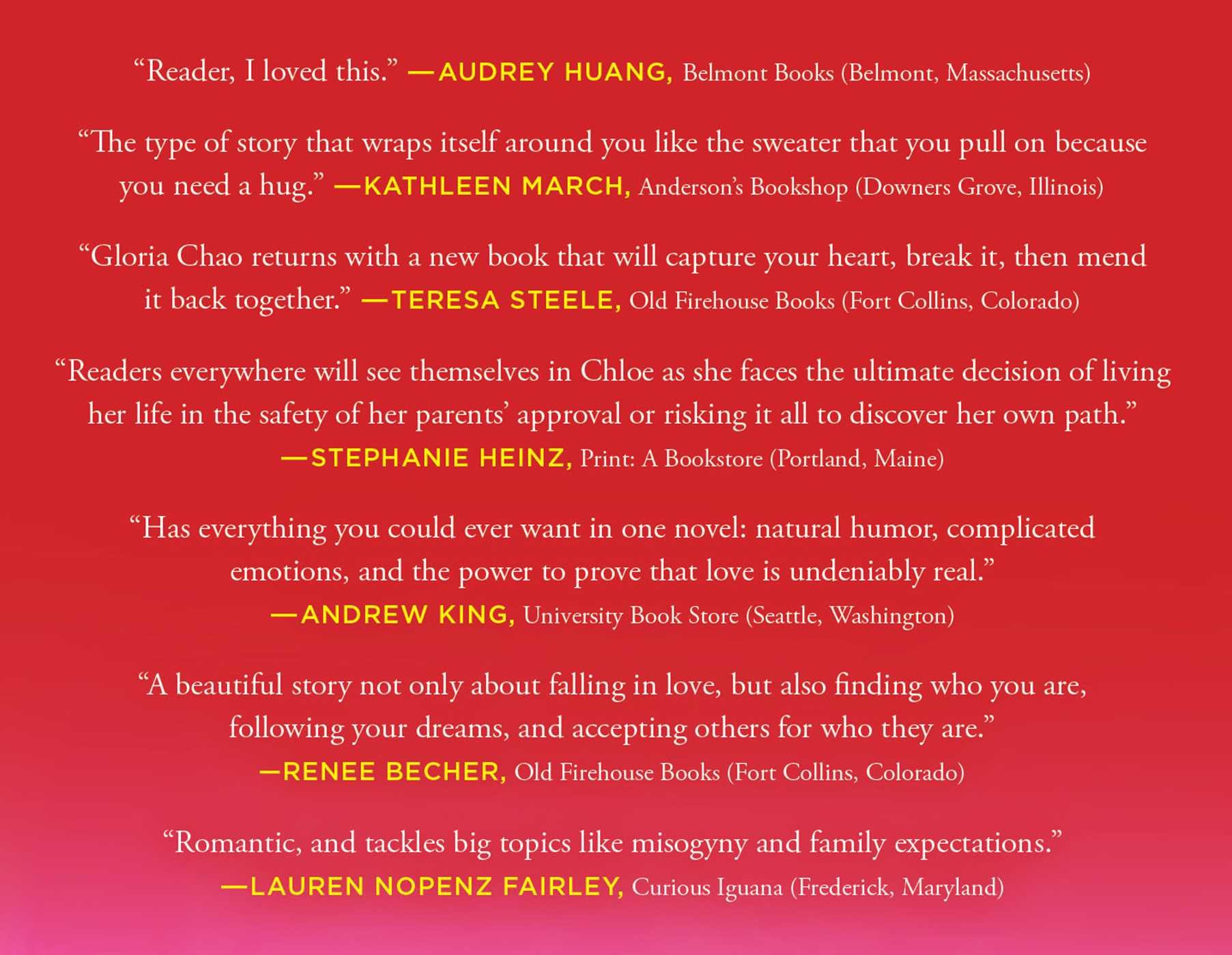 To All the Boys I’ve Loved Before meets The Farewell in this incisive romantic comedy about a college student who hires a fake boyfriend to appease her traditional Taiwanese parents, to disastrous results, from the acclaimed author of American Panda.

Chloe Wang is nervous to introduce her parents to her boyfriend, because the truth is, she hasn’t met him yet either. She hired him from Rent for Your ’Rents, a company specializing in providing fake boyfriends trained to impress even the most traditional Asian parents.

Drew Chan’s passion is art, but after his parents cut him off for dropping out of college to pursue his dreams, he became a Rent for Your ’Rents employee to keep a roof over his head. Luckily, learning protocols like “Type C parents prefer quiet, kind, zero-PDA gestures” comes naturally to him.

When Chloe rents Drew, the mission is simple: convince her parents fake Drew is worthy of their approval so they’ll stop pressuring her to accept a proposal from Hongbo, the wealthiest (and slimiest) young bachelor in their tight-knit Asian American community.

But when Chloe starts to fall for the real Drew—who, unlike his fake persona, is definitely not ’rent-worthy—her carefully curated life begins to unravel. Can she figure out what she wants before she loses everything?

Almost everyone is nervous introducing their boyfriend to their parents for the first time, but I was about to pee my sweat-soaked undies because, well, I hadn’t met him yet either.

Since he already knew my life story (at least the parts that mattered), it was “highly recommended” we not meet before the “assignment” to minimize confusion. Which meant my Uber picked me up from the airport and picked him up a block away from the destination, i.e., my parents’ house. Thanks, George, Toyota Camry, for earning your five-star rating by not asking us what the bejesus was going on.

As we waited on my parents’ stoop and the doorbell echoed through my feng-shuied three-bedroom, three-bathroom childhood home, I couldn’t bring myself to look at him. I was sure he was trained to keep the judgment out of his eyes, especially because I was the hand that was feeding him, but maybe the real problem here was that, between the two of us, he wasn’t the one judging me.

My parents flung the door open and exclaimed, “Jing-Jing!” before wrapping me in hugs.

Over my father’s shoulder, my gaze flicked to my “boyfriend” instinctively, to try to explain with my eyes that I had two names. But then I remembered I had only given the company (and thus him) my Chinese name, which was usually only heard between the embroidered wall scrolls of this house. My decision to list my legal but seldom-used name had been strategic in nature: to put it eloquently, I knew my parents would lap that shit up. It had to be true love if he was the first person outside our little Chinese community I’d told my real name to, right?

I’d dubbed myself Chloe in second grade after the hundredth joke about Jing-Jing sounding more like a song than a name. On a whim I’d started telling everyone to call me Chloe, after the universally loved golden retriever in my neighborhood. I think I had unconsciously hoped that there was some secret sauce in the name and that adopting it would make people like me more—which, sadly, worked. Soon it became who I was, more so than Jing-Jing. But the first and last time I had a friend over and she called me Chloe in front of my parents, my mom choked on her soy milk and my dad swallowed a tea egg whole. From then on, I kept my two worlds apart.

With the confidence of an Asian American who is used to lying to her dragon parents—the ones who named me Jing so I would shine in everything I do—I said, “Mamá, Babá, this is Andrew.” Shit. Had I remembered his name correctly? Not that it mattered: his “correct” name probably wasn’t his real name anyway, so Andrew Shamdrew, po-tay-to po-tah-to, right?

My dentist parents examined now-Andrew up and down like he was a mystery specimen under their loupes. I had to hold back a laugh. In some ways, Andrew wasn’t hiding anything, and in other ways, Insert Name Here was hiding everything.

“Ayí, Shushú hao,” he greeted my parents, calling them the polite and more-than-appropriate “Auntie” and “Uncle,” which usually made me pause because the direct translation didn’t make sense to my Americanized ears. You can’t mix cultures that way, my mother always scolded.

It took me a moment to notice that Andrew’s perfect Mandarin had been spoken with a Taipei accent. Damn, this company was good, like Match.com on steroids, except they were matching him to my parents, not me.

Andrew smiled a healthy, toothy grin that made my parents’ eyebrows shoot up in pleasant surprise. I wondered whether the company had paid for those sparkling, just-Cavitroned pearly whites.

“Aiyah, you have great oral hygiene,” my dad said, which, okay, if it was that easy, why did I have to pay a make-your-nose-and-gums-bleed amount to rent Andrew today? Good aiyahs weren’t easy to come by, but I guess anything teeth-related was a shortcut.

My mom’s eyes darted to the UChicago crest on Andrew’s zip-up sweater. That nontrivial detail had been my choice, and I still so clearly remembered checking—or I should say, clicking—the UChicago box after scrolling past Stanford, MIT, Yale, Princeton, and, of course, Harvard. I could’ve earned extra mooncake points (my parents would never eat brownies) for Harvard, but it had made the most sense to have “met” Andrew at school. UChicago wasn’t the college my parents had wanted me to attend at first, but they had since come around after it became higher ranked than “most prestigious” Stanford down the street from us.

“Qing jìn. Qing jìn,” my mother said as she ushered us in with over-the-top manners. With guests, she only had two extremes: so polite it was fake or so honest you wished she’d lie. I was grateful it was the first one. For now, my brain warned.

With a dip of his head, Andrew handed her the box of mooncakes he’d brought. God, was this in his training? Or had he grown up like me, in a traditional, we-stick-acupuncture-needles-in-our-faces-when-we-feel-bad household? I wondered if he also intimately knew the smell of Salonpas, the pungency of which made me simultaneously want to hurl and hug my parents—which, coincidentally, was a pretty accurate summary of my entire relationship with them.

Except… it didn’t matter whether Andrew knew the stink of Chinese herbal medicine and how it sank its bitter claws into everything in the laundry. Because he wasn’t actually my boyfriend.

My father ushered us to the dining room table, which, to my surprise, flaunted a crispy, golden-brown turkey in the middle. It was just sitting there lazily, as if there had been one every year instead of the zhàjiàng noodles, dumplings, and stir-fried hollow-heart vegetables, which now took a side seat but of course were still present—because how could you not have any Chinese food on Thanksgiving?

I briefly wondered what Andrew’s Thanksgivings were like—did his family also eat Chinese food? Did he know the veggies were called kong xin cài?—before I snapped out of it and realized my parents were looking at us expectantly, eyes hungry but not for food.

Game. On. All I had to do was convince my parents that Andrew was the love of my life and theirs. Piece of (moon)cake, right?

Gloria Chao is the critically acclaimed author of American Panda, Our Wayward Fate, and Rent a Boyfriend. When she’s not writing, you can find her with her husband on the curling ice or hiking the Indiana Dunes. She does not regret putting aside her MIT and dental degrees to write, and she is grateful to spend her days in fictional characters’ heads instead of real people’s mouths. Visit her tea-and-book-filled world at GloriaChao.Wordpress.com and find her on Twitter and Instagram @GloriaCChao.

“With Chao’s signature humor and lovable characters, she once again offers insights into Taiwanese culture alongside scads of delightful rom-com ordeals, mishaps, and kisses.” —Booklist

“Rent a Boyfriend is exactly the kind of romantic romp promised by the title, but it’s also an emotional gut-punch, a careful excavation of family secrets, and a reminder to anyone who’s ever felt alone that they are absolutely worthy of love.” —Rachel Lynn Solomon, award-winning author of Today Tonight Tomorrow and You’ll Miss Me When I’m Gone

“Laugh-out-loud funny, achingly honest, and unbelievably swoony.” —Stephanie Kate Strohm, author of Love à la Mode and It's Not Me, It's You

“Captures perfectly the giddy sense of inevitability that happens to people when they realize they are meant for one another.” —Jessie Ann Foley, Printz honor–winning award-winning author of Sorry for Your Loss

“A beautiful story about finding and following your own path, full of warmth and humor.” —Ashley Herring Blake, author of Girl Made of Stars

“I adored this totally charming tale of two lovable fakers who find the courage to be real with one another, and with themselves.” —Rebecca Podos, author of Like Water

“Sweet, romantic, hilarious, and heartfelt, Rent a Boyfriend is the feel-good book you’ve been waiting for.” —Amber Smith, New York Times bestselling author of The Way I Used to Be and Something Like Gravity

“Authentically swoony, laugh-out-loud funny, and genuinely moving. I cheered for Chloe and Drew—and readers will too.” —Amy Spalding, bestselling author of We Used to Be Friends and The Summer of Jordi Perez

“The type of story that wraps itself around you like the sweater that you pull on because you need a hug.” –Kathleen March, Anderson’s Bookshop (Downers Grove, IL)

“Gloria Chao returns with a new book that will capture your heart, break it then mend it back together." –Teresa Steele, Old Firehouse Books (Fort Collins, CO)

“Readers everywhere will see themselves in Chloe as she faces the ultimate decision of living her life in the safety of her parents' approval or risking it all to discover her own path.” –Stephanie Heinz, Print: A Bookstore (Portland, ME)

“Has everything you could ever want in one novel: natural humor, complicated emotions, and the power to prove that love is undeniably real.” –Andrew King, The University Book Store (Seattle, WA)

“A beautiful story not only about falling in love, but also finding who you are, following your dreams, and accepting others for who they are." –Renee Becher, Old Firehouse Books (Fort Collins, CO)