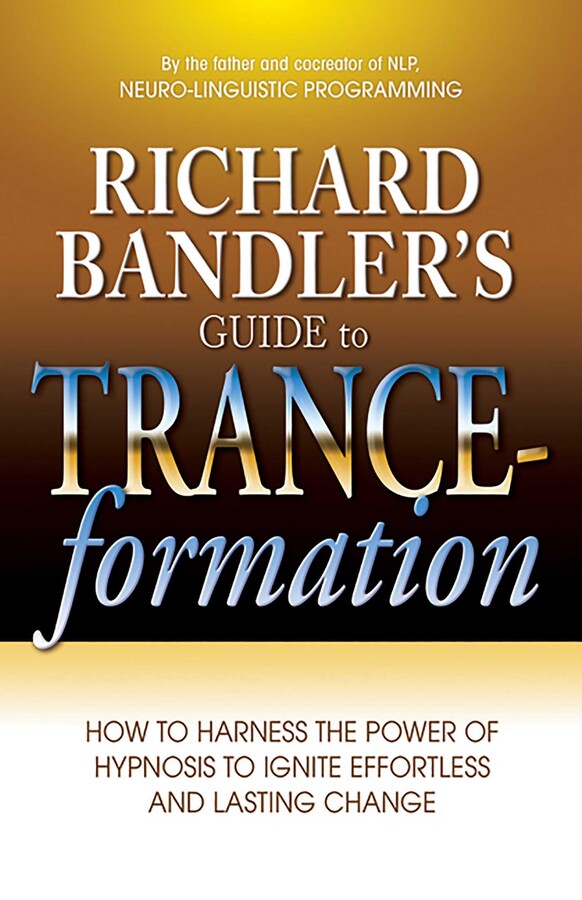 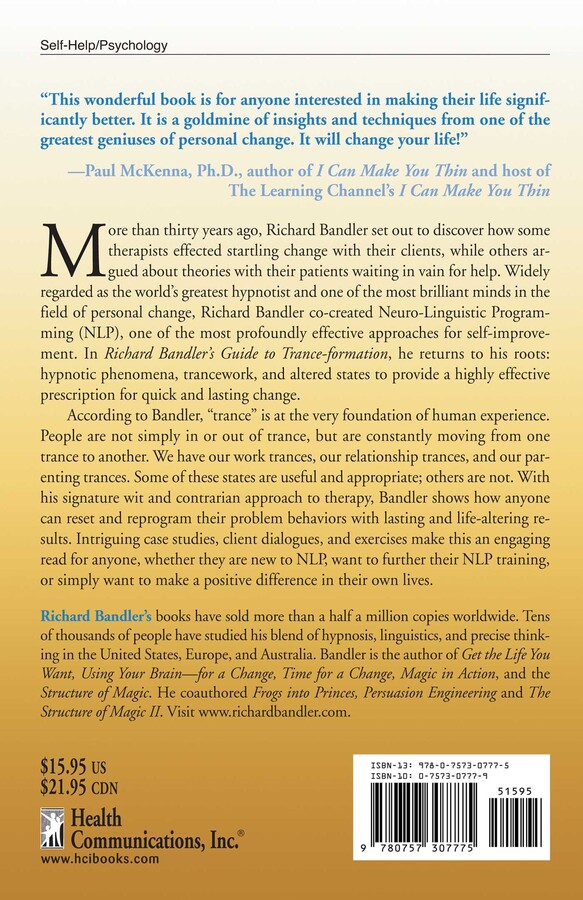 More than thirty years ago, Richard Bandler set out to discover how some therapists managed to effect startling change with their clients, while others were arguing about theories as their face patients waited in vain for help. Now widely regarded as the world's greatest hypnotist, Richard Bandler observed and developed patterns which became the foundation of neuro-linguistic programming (NLP), arguably one of the most profoundly effective approaches for self-development and change. Since coauthoring the internationally influential books, The Structure of Magic Volume 1, and Patterns of the Hypnotic Techniques of Milton Erickson, M.D. Volume 1, Bandler has traveled the world, honing his skills and helping people solve problems and achieve goals when other "experts" have been unable to help. Richard Bandler's Guide to TRANCE-formation, he returns to his roots: hypnotic phenomena, trancework, and altered states to provide a highly compelling prescription for personal change. According to Bandler, "trance" is at the very foundation of human experience. People are not simply in or out of trance, but are moving from one trance to another. They have their work trances, their relationship trances, their driving trances, and their parenting trances. Some of these states are useful and appropriate; others are not. With his signature wit and contrarian approach to therapy, Bandler shows how anyone can reset or reprogram problem behaviors to desired alternatives, with lasting and life-altering results. Peppered with case studies and more than thirty exercises, Richard Bandler's Guide to TRANCE-formation, is an intriguing, engaging, and often amusing, read for anyone, whether they are new to NLP, want to further their NLP training, or simply want to make a positive difference in their own lives.

With decades of practical and clinical hypnotherapy work behind him—during which he claims to have cured everything from phobias to schizophrenia—hypnotist and author Bandler (Get the Life You Want) rejects conventional psychotherapy in favor of 'neuro-linguistic programming,' rooted in the inherent human capacity for learning and communication. Here, Bandler collects his techniques for overcoming mental problems now and in the future. Trance states, according to Bandler, are phenomena vital to the human experience, particularly in repetitive behaviors: '[A]t some level or other, everything is hypnosis...[people] have their work trances, their relationship trances, their driving trances.' Exploring these trance states with readers, Bandler provides a number of practical, meditative strategies for developing one's abilities to self-assess and reprogram destructive patterns, providing numerous patient anecdotes and sidelights on subjects like buried hypnotic commands. Despite some improbable claims (achieving lasting cures after only one trance session), Bandler's thorough breakdown of the learning process and simple, cumulative exercises make this psychological self-help worth a look, especially for those who have hit dead ends with more standard approaches.  Publishers Weekly, November 2008

"This wonderful book is for anyone interested in making their life significantly better. It is a goldmine of insights and techniques from one of the greatest geniuses of personal change. As you use the techniques in this book, you will exponentially increase your ability to make dramatic life-enhancing differences. It is by far one of the most entertaining and professionally stimulating books I have read. It will change your life!"--Paul McKenna, Ph.D, author of I Can Make You Thin and host of The Learning Channel's I Can Make You