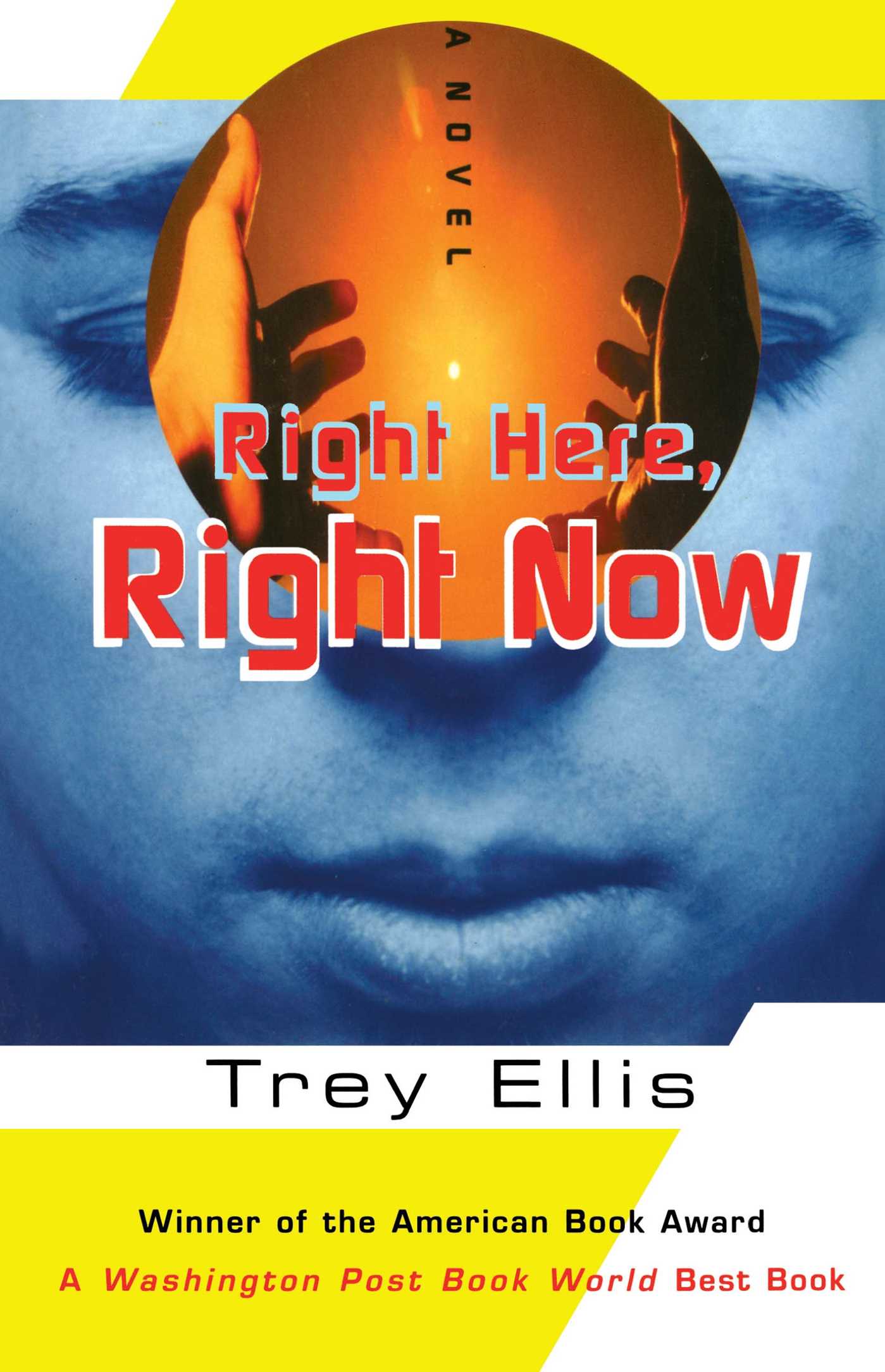 Through the Self-Help Glass -- Very Darkly
Meet Ashton Robinson, a dashing playboy whose suave charm, worldly pretensions, and ecstatic seminars have made him one of the most successful motivational speakers in the country.
After an encounter with the synergistic effects of marijuana and expired cough syrup, Robinson renounces his life as a self-help icon and pronounces himself a spiritually enlightened master. Overnight he invents the world's newest religion, based on meditation, bungee-cord jumping, tantric sex, and The Gap. Has he stumbled upon one of the great truths of the universe? Or has the same outsized ego that fueled his success as a motivational speaker driven him over the edge?
With surgical wit and acuity, Trey Ellis has written a titillating and trenchant tale about the revivalist fervor of the American self-help industry. Right Here, Right Now is a corrosively funny and provocative exploration of the impulse to self-improvement -- one of the most salient features of American popular culture at the close of the twentieth century.

Until I think up a better system, we'll do it like this. I'll play the recording of the day's lecture on the little boom box here in my hotel room, hovering over the pause tab to chime in with edits, additions, and clarifications. I wish there were a way to directly patch the boom box right into you, Mr. Microcassette Recorder, but I don't see any extra holes on you. Anyway, the sound quality should certainly be good enough for a transcript.

I want this next book to dig deeper than the last two, to really give my fans -- my follow -- I want to give the people that buy my books and audiotapes a better sense of Ashton Robinson the man. They'll buy the book and make it a best-seller like the first two, almost no matter what I put in it, so I might as well stretch out this time and give them a few surprises.

I get a sense from so many of their letters that they think of me as being as divorced from their reality as Santa Claus. Wouldn't it be nicer if they just thought of me as their faraway friend? The one who left their hometown and made good, but who's still there for them when they're needed? So, along with the transcripts of the lectures I'm delivering these days, I'll be throwing in behind-the-scenes moments of my everyday life. At least for this first draft, that is. I'll have plenty of time to edit later.

This morning's lecture was a variation on the one I gave last year in Maui, but I think this one had a tad more zing.

[Sound of cassette player buttons clacking, then very loud calypso music. Robinson curses unintelligibly. One minute, forty-five seconds of silence before the recording of the lecture.]

-- The DeHavilland Otter, dropping nose-first toward the six hundred meters of runway, the second-shortest in the Caribbean, scared the dozen of us pleasantly until a shrill alarm sounded that I would later learn was the indicator of a stall. But you didn't need to know its exact function to realize that it was trying to tell us something extremely important. Suddenly, the humorous anecdote about this tiny and funny-looking prop-driven plane that I was at that moment revising in my head to relate to you now exploded into the headline of a small article on the front page of the San Jose Mercury News, my local paper...

-- Then, just as suddenly, the heavy plane bounced itself upward to level, then again descended, less steeply now, and we soon touched Tarmac with a happy bleat from the tires, then an angry whinnying engine yell of reverse. The family of bathers knee deep in the pretty water at the beach just off the runway's far end closed their open mouths, and the videotaping father lowered his camera, seemed almost disappointed -- visions of money and a free trip for all to Rescue 911's production facilities in Orlando when they aired our crash seemed to have swelled within him, then left just as suddenly, as we safely rolled to a stop. Even our copilot clapped, I think...

-- That is just the sort of experience I make myself have. Let me repeat, make myself have. Now, of course, you are all thinking, Did he will the plane to stall? Did he telepathically increase the wind shear over the mountains? Of course not, you all say. Is there no end to this man's egotism? you must be thinking. And I say unto you, No, sirs and madams, there is not.

This laughter from my students temporarily distracted the French waiters and waitresses, all in their twenties, good looking, and ponytailed. My students jiggled their pens quickly through their notebooks. Each binder has PES, Inc. stamped in silver on the deep grain of the chocolate-colored leather. And each one cost me thirty-five bucks, even bought in bulk. When some muckraker complains about how much I'm worth, they never seem to bring up how much I spend.

-- You are my master class. You are no longer just listening to me on your commutes: "This is the end of side seven. Please fast-forward and turn the tape over to side eight."

This made them laugh again. An inside joke. The best kind. They were no longer three or four hundred crowding the rickety folding chairs in the Lindbergh Room of the Dallas-Ft. Worth Airporter Days Inn. This time they are just thirty-one, the chosen few.

-- So, as participants in my master class, you're all going to get to go behind the scenes, as it were, and really see how full of myself I really am! How high on myself I am. Literally and figuratively. I love me so goddamn much! And it's from here that my success springs! How many of you have ever told yourselves you love yourselves? Well, I do, five to fifteen times a day! How many of you have ever called themselves "stupid," a "jerk," or an "idiot," or worse...? Hands. Come on, I want to see hands...Now, how many of you have already called yourselves that this morning...? Good...Excellent. Thank you for your honesty. I won't ask, but I am sure there's at least one of you here whose first words to themselves immediately after opening their eyes this morning were something like "Damn," or "Shit, I forgot to..."

-- But you know what was the first thing I said to myself? "Good morning, good looking." I'm not a zombie; it's not what I always say; it's just what immediately came to mind. And you'll all get a kick out of this. I awoke with the very pleasant buzz of an erection. Last night I probably dreamed the recurring dream I've had since the fifth grade: I'm the star running back for the Buffalo Bills. It's the day of the Super Bowl and right before the game the Dallas Cowboy cheerleaders kidnap me and have their way with me. I know, I know. I'm thirty-four years old. I should get over it already. But my inner child, you see, he has a will of his own.

-- Anyway, the point is, I wake up loving myself and ready for bear. Do you think it is a coincidence that I have that attitude, work for myself, smile all the time, and have more money in the bank than many medium-sized companies?

-- Was I born with such an outsized ego? Yes, I was. Were you? Damn straight. All of us were. But your parents, your teachers, television, that juvenile delinquent a couple years older who chased you around the playground, held you down, and farted on you in front of Darla Kincaid all unknowingly conspired to beat the love of self right out of you. Write this down, ladies and germs. Write this down in your expensive leather-bound note-books: "I am going to get it back."

Woman's voice: "On its own separate page?"

She didn't say that as a devoted fan. More as a gentle jibe. And instantly, I liked her even more. I had noticed her last night, from the mezzanine, as they were all checking in down below. Strappy, high-heeled sandals. Gucci, maybe, but definitely bought just for this trip. This morning her auburn hair curled behind her ears under her floating straw hat. A jug of sunblock squatted beside her portfolio, but still her arms were practically freckling right before my eyes, like bubbles on cooking pancakes. Pale as she was, I could still tell she was at least part black. I shot my eyes down and over the seating chart, then up and into her eyes.

-- Nikki Kennedy, Hyde Park, Chicago, hello. The size, punctuation, and layout of the phrase is completely up to you. Good question, though. Because how you just wrote it down speaks volumes about how much you really want it. Now, I'm not saying capitalize and triple-underline everything like a serial killer. I'm just saying roll up your sleeves and let's get ready to work.

I met Lenny Gilroy, of the Gilroy Memory System, at last year's Infomercial Industry Leader Super Summit, and he gave me a set of his tapes, free. (Mine retail for a lot more than his, but I felt I had to give him a free set. But I really shouldn't complain. Now that I bought out the cassette-duplicating company, my price per unit's dropped to just forty cents.) Anyway, Gilroy teaches that words themselves are very difficult to remember but pictures are hard to forget. So, to remember Nikki's name I pictured Nikita Khrushchev shaking hands with JFK.

-- So, let's get back to loving ourselves. There was a time, folks, when not ten minutes would pass where I wouldn't curse myself, doubt myself, make myself as miserable as possible. It was my dark period, and you might have heard me talk about it before. I was a junior at Yale and just couldn't take it anymore. The mental straitjacket I was in, in that institution! I thought it was me. I blamed myself for not fitting in, despite having tried for three lonely years. I cried, people. There were nights when I cried like a baby. My grades weren't miserable; they just weren't stellar. My relationships were superficial and all of them dead ends. I'd allowed the self-love and self-confidence I'd enjoyed up until high school to be absolutely exhausted by a bunch of skinny East Coast pseudointellectual fops in capes! So I quit that venerable institution of higher learning, traveled the world, and dedicated myself to rebuilding the love of myself that I knew still lay dormant somewhere deep inside me.

Waves coming apart noisily on the sand, vacationers' children screaming just to hear themselves. I remember these sounds entering the space behind my question. I tell these stories of myself almost every time I lecture, but here, on such a magnificent island, the difference between where I've been and where I am startles even me.