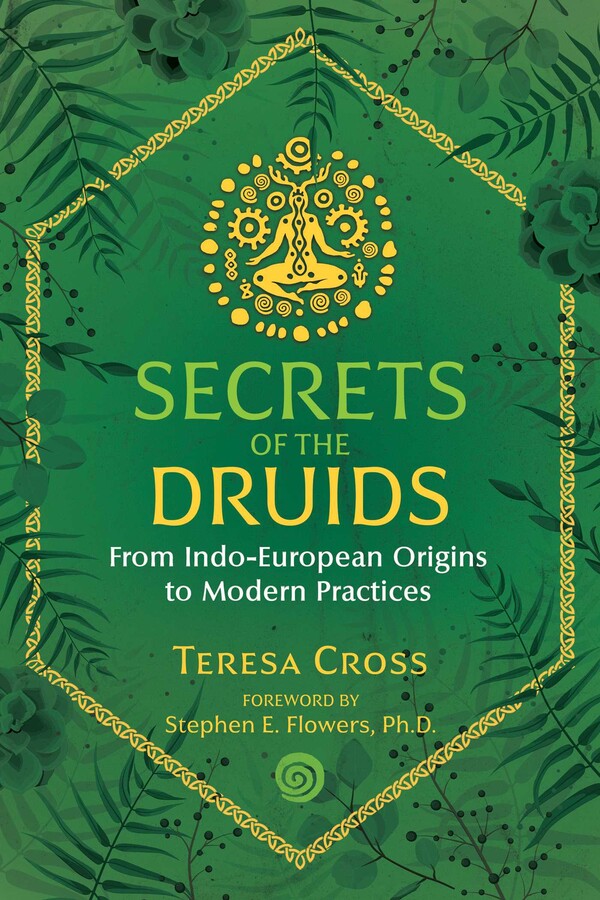 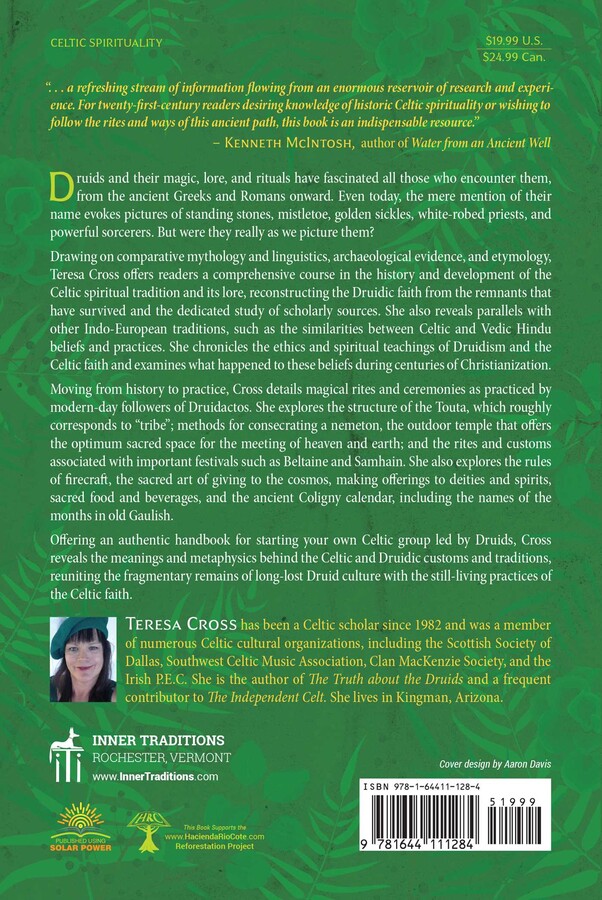 • Reconstructs the Druidic faith from surviving remnants, parallels with other Indo-European traditions, and dedicated study of scholarly sources

• Details magical rites and ceremonies, methods for consecrating an outdoor temple, and customs for celebrating important festivals such as Beltaine and Samhain

• Discusses rules for firecraft, making offerings to deities and spirits, and the ancient Coligny calendar, including the names of the months in old Gaulish

Druids and their magic, lore, and rituals have fascinated all those who encounter them, from the ancient Greeks and Romans onward. Even today, the mere mention of their name evokes pictures of standing stones, mistletoe, golden sickles, white-robed priests, and powerful sorcerers. But were they really as we picture them?

Drawing on comparative mythology and linguistics, archaeological evidence, and etymology, Teresa Cross offers readers a comprehensive course in the history and development of the Celtic spiritual tradition and its lore, reconstructing the Druidic faith from the remnants that have survived and dedicated study of scholarly sources. She also reveals parallels with other Indo-European traditions, such as the similarities between Celtic and Vedic Hindu beliefs and practices. She chronicles the ethics and spiritual teachings of Druidism and the Celtic faith and examines what happened to these beliefs during centuries of Christianization.

Moving from history to practice, Cross details magical rites and ceremonies as practiced by modern-day followers of Druidactos. She explores the structure of the Touta, which roughly corresponds to “tribe,” methods for consecrating a nemeton, the outdoor temple that offers the optimum sacred space for the meeting of heaven and earth, and the rites and customs associated with important festivals such as Beltaine and Samhain. She also explores the rules of firecraft, the sacred art of giving to the cosmos, making offerings to deities and spirits, sacred food and beverages, and the ancient Coligny calendar, including the names of the months in old Gaulish.

Offering an authentic handbook for starting your own Celtic group led by Druids, Cross reveals the meanings and metaphysics behind the Celtic and Druidic customs and traditions, reuniting the fragmentary remains of long-lost Druid culture with the still-living practices of the Celtic faith.

From Chapter Nine: THE NEMETON

It has long been a cliché that our Celtic ancestors worshipped rocks, trees, and other “senseless” things, or that the druids (as if they were a separate people) were wistful old wizards who either pined mystically in the misty glades or butchered everyone who wandered into their gruesome groves. Of course, these are all popular misconceptions and most people should know better, but we still hear of “neo-druidic” organizations who call their small groups “groves” as if they were somehow the “Druidic” counterpart to a temple, church, or mosque. This is a significant misconception as well. Sacred grounds or places are common to most religions, and there is no exception with our Celtic forebears.

The sacred ground was called a nemeton in Gaulish and Brythonic, and the word simply meant “sacred place,” related to the PIE root *nem-, “to measure out,” as in a sacred plot of ground.

Nemetons came in two basic shapes, quadrangular or circular. Rectangular nemetons were sacred to the Gods, and it is believed that the circular ones must have been sacred to the toutal Goddess who represented the land and was a sort of totem of the touta. This is because the circular shape symbolizes the middle world of the manifest world or the earth, while the square or rectangular shape symbolizes the four corners of heaven (see Chapter 3).

The nemeton of the Celts somewhat resembles in its dimensions and size the Norse (Germanic) vé and the interior of their temples, and its set-up matches closely the Vedic Indian devayajana, which was their counterpart to the nemeton. In the Vedic devayajana, we find that the shapes of the fires symbolized the three main levels of the multiverse, with the round fire for the domestic operations and the square ones for cooking.

Setting Up the Nemeton

This first ritual needs to be done before most any of the other rites can be done, but, once it is set up, one need never do it again. This is one of the things that sets Druidiactos apart from most Neo-Pagan traditions. Since we do not use the rituals of cabalism, commonly called “ceremonial magic,'' we do not need to consecrate and reconsecrate our sacred ground like most of the others.

A nemeton should be a sacred ground in a natural setting. A clearing in an oaken forest, on a hilltop, or near a natural body of water are ideal spots. This, of course, means that your touta will need property for this use. It is best to use a rural and secluded spot away from the noise and traffic of the mundane world.

The natural features of the site are of paramount importance. Oak trees are symbols of the high Gods in particular (Taranis, Taran, or Torannan). It is not necessary that your oak trees be the exact species of quercus robor, the “English oak.” A great variety of oak trees grow both wild and cultivated in in North America and Europe, and all of them are indeed sacred.

The nemeton should be a plot of ground anywhere from the size of a small garden or back yard to that of a football field. The central area of it should be about nine paces long by three paces wide. It must be clear of all grass, weeds, twigs and other debris. The soil should be flat and pounded down, with a small, level mound in the center. A square pit should be dug to the east and a round one to the west. These pits should be about one yard in diameter or one yard square. This rectangular enclosure should be laid out with its long axis running east-west.

The whole nemeton site should be clean of any pests and cleared of high weeds and any rubbish found in the area. Trees surrounding the area should be decorated with bird feeders to attract the delicate creatures that sing their beautiful songs and cast omens.

Your nemeton may be decorated with flower gardens, but it should also be surrounded with a bank and ditch. This ditch should be dug about one or two feet deep, with an embankment surrounding the entire lot. This surrounding boundary is called an airbe druad [awr-rib-eh droo-a].

The pits will be used for building the sacred fires, and the whole nemeton area should be open to the sky. Surround the fire pits with gravel and rock and cover them with iron grills which may be lifted without difficulty. The round fire pit symbolizes the domestic fire, the home, and the middle world or mediomagos at the sacred center. The square fire pit is the fire of the heavens, symbolizing the world of the Gods and the sun in the sky. The round fire is used for cooking the sacrificial meal. It is a sort of holy barbecue pit or campfire. The square fire is where the offering of the adbertos is placed, that is, a portion of the food is actually burned on it. Additionally, the round fire symbolizes not only the hearth and home, but also the land of the touta and the Goddess of that land. This is why this hearth is used for cooking.

During the adbertos, the square flame becomes the focal point when the offering is placed upon it. The flames eating away at the food, fuel, and incense become the visual image on which all gathered fix their attention and upon which they meditate. Everyone should gaze at the burning fire or embers for at least ten to fifteen minutes, closing his or her eyes and attempting to retain a mental image of the flame or flames. It is very important that these fires be built up very carefully with attention to safety and the proper materials.

A semicircular fire pit should be dug to the southeast of the domestic firepit. This semicircular shaped hearth is called the dexouiotenia DEKHS-so-wee-oh-TAYN-yah], “south or right-hand fire.”
Teresa Cross

Teresa Cross has been a Celtic scholar since 1982 and was a member of numerous Celtic cultural organizations, including the Scottish Society of Dallas, Southwest Celtic Music Association, Clan MacKenzie Society, and the Irish P.E.C. She is the author of The Truth about the Druids and a frequent contributor to The Independent Celt. She lives in Kingman, Arizona.

“. . . a refreshing stream of information flowing from an enormous reservoir of research and experience. For twenty-first-century readers desiring knowledge of historic Celtic spirituality or wishing to follow the rites and ways of this ancient path, this book is an indispensable resource.”

– Kenneth McIntosh, author of Water from an Ancient Well

“A thoughtful and well-researched reconstruction of archaic Celtic tribal spirituality.”

“This fascinating account of the Druids--from ancient to modern practice--provides a comprehensive history of the tradition as well as everything one needs to know to practice this vibrant path of healing and magic.”

– Martha Shideler, author of Caitlin: Priestess of the Goddess and editor of The Independent Celt

“. . . a fantastic guide on modern Celtic polytheism. Filled with important information on history and modern, practical takes on rituals, this book is a must for the aspiring polytheist. An engaging and thought-provoking read from start to finish--I loved it!”

“Secrets of the Druids has been updated and expanded, strengthening some its best features, such as its detailed linguistic resources. I heartily recommend it to anyone interested in Celtic culture and spirituality or the ancient world in general.”

"A GOOD RECONSTRUCTION is hard to find. It must be rooted in living priesthood and also scrupulously historical, drawing on textual, artistic and archaeological sources. It must be both true to its origins and acceptable to modern culture. It should bring ancient and modern cosmologies into a meaningful dance that uplifts rather than overwhelms the worshiper. Perhaps most importantly, it must be explained simply but thoroughly, and its rituals should be beautiful and practical to enact. Secrets of the Druids; From Indo-European Origins to Modern Practices by Teresa Cross is just such a gem. It draws on history, archaeology and linguistics to reconstruct cosmology, theology and ritual. The result is not just a book about ancient Celtic religion or just a hands-on guide to modern Druidry, but a highly readable marriage of both that is well-researched and well-written."

"A living and working triad of study, activity, and inspiration empowers the research, practice, and focus of Secrets of the Druids for students everywhere. Highly recommended."