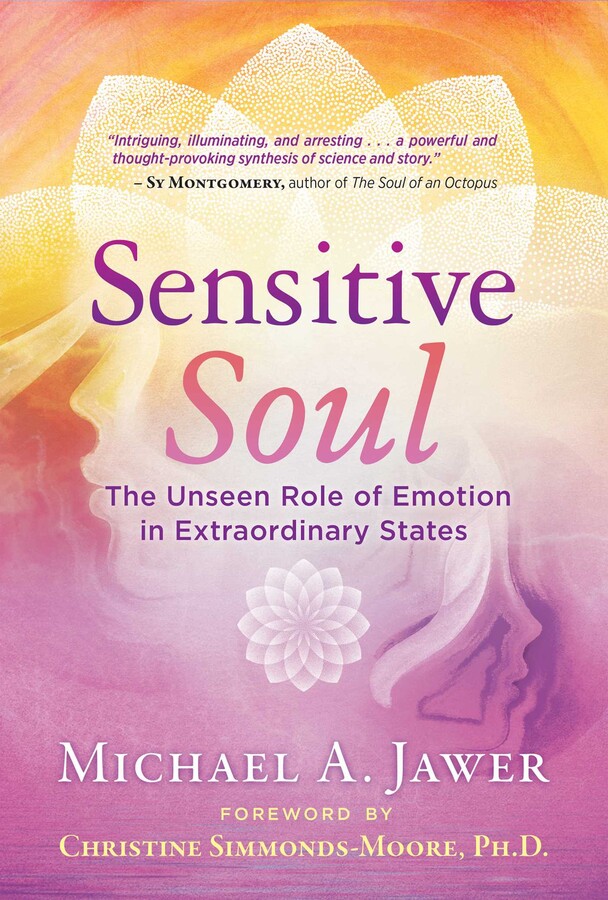 The Unseen Role of Emotion in Extraordinary States

Explores how emotion underlies personality, triggers the development of non-ordinary states and perceptions, and connects all life

• Looks at the emotional lives of animals, demonstrating how life-threatening emergencies can trigger amazing sensitivities and abilities in them

Emotion, as it exists within and between people, underpins personality, spirituality, and a range of extraordinary perceptions, conditions, and experiences. These include déjà vu, phantom pain, post-traumatic stress disorder (PTSD), and extreme empathy, where people instantaneously feel the physical or emotional pain of another. Many gifted children, those with synesthesia, and people with autism--not to mention highly sensitive people in general--report forms of innate “knowing” and even paranormal experiences. In this exploration of the role of emotion in non-ordinary states and abilities, Michael Jawer shows how the flow of our emotions and those of the people around us greatly influences the development of exceptional capacities and sensitivities.

Drawing on a range of scientific studies, Jawer explores how 5 remarkable kinds of people--individuals with autism, synesthesia, savantism, child prodigies, and children who remember past lives--are linked through the biology of emotion and how a hidden emotional intensity underlies both autism and anomalous perception. He examines the psychological concept of thin and thick boundaries and how those with thin boundaries--those who are more environmentally sensitive--have a greater predisposition toward empathy, synesthesia, psi abilities, and extraordinary states of perception. Sharing extraordinary examples, the author explores how strong emotion may endure through time and space, possibly even after death. He also looks at the emotional lives of animals, our soulful connections with them, and how life-­threatening emergencies can trigger amazing sensitivities and abilities in our fellow creatures.

Revealing the unseen role of emotion in mind and personality, Jawer shows that emotion is the binding force that connects us with one another, with all of life, and with nature itself.

From Chapter 3: The Resonance of Perception: Instinctive Sensing as a Crucible for the Anomalous

The late Donna Williams was a remarkable person. Raised in Australia, she was autistic but didn’t know it until diagnosed at age 26. Up to that point, she had been regarded as exceedingly strange. “Retarded,” “mental,” “stupid,” and “crazy” were some of the terms used, starting with her own family.

In many respects, Donna was encased in her own world. She would see patterns and spaces, losing herself in what she gazed upon or felt herself a part of. She loved making collections of things and endlessly ordering them. She largely saw parts of people - hands, arms, faces - and didn’t easily connect the whole person together. Similarly, the meaning carried by gesture and intonation was often lost, with the sounds of words alone having an impact.

Donna constantly dealt with a barrage of sensation, finding high-pitched sounds, bright lights, and even the most basic touch intolerable. Emotion scared her, and she coped by further withdrawing on the one hand and developing a pair of trusty personas on the other. She also, it turned out later, was allergic to various foods; her behavior and demeanor improved to some extent when this was addressed. Donna ultimately became able to feel her feelings rather than being scared by them and retreating into her private, inaccessible world.

A Web of Sensory Impressions

In her memoirs, Williams strikes several themes that are highly useful in understanding what it is like to be autistic. Her first key point is that people on the autism spectrum view themselves and the world primarily through a web of sensory impressions, not mental constructs. Whereas most people know a comb, for example, as an object that has utility with hair, and that happens to be flat and has teeth and is often black, for an autistic person that same comb might be fascinating for the scraping sound it makes when run across one’s teeth. In the same way, individuals with autism perceive other people, animals, even insects based on characteristic colors, smells, vocalizations, and movements rather than taking them in as “wholistic” organisms.

A second, fundamentally related point is that people with autism will often “merge” into the web of sensation they are witnessing. They “resonate” with whatever is being experienced, losing their sense of body boundaries so that they seem to become one with the object. “Suddenly,” observes Williams, “there is no you and what had been you just becomes a tool, like a sponge through which this sensing or resonance is taken in. What is sensed is not taken in by the conscious mind and there is no thought and no reflection, no wonder and no curiosity. There is just a journey into whatever is being sensed.”

The “intense world” hypothesis posits that people with autism are bombarded at an early age with sensory stimuli, and that they subsequently withdraw from the world in order to cope. It’s also worth noting that emotional stimuli are as prominent as physical stimuli in that barrage. Donna Williams calls it “an intense, uncontrollable empathy.” Around someone with a broken leg, for instance, she “felt their pain in my leg.” Similarly, “I could feel when people had . . . emotional pain whether they displayed it or not . . . I felt it within me, and [my] connection to my own feelings . . . simply switched off as though some frequency had interfered with my aerial.” The mechanism, as she describes it, is one where too much information is coming though and the person can either attend to the external stimuli or the internal stimuli but not both at the same time.

We Could All Be Born Autistic

My proposition is this highly attuned sensing is the “default” setting of human beings, beginning in utero. Gradually, through infancy and childhood, this fluid and multi-modal way of perceiving is superseded (in most people) as neuronal connections mature and sense perception becomes more discrete. Some people, because of a combination of nature and nurture, retain this mode of perceiving to a far greater extent than others. Individuals who are fantasy-prone, or who find themselves easily absorbed into various situations or pursuits, or who are suggestible, or who have thin boundaries are the types of people I mean. For them, it takes little or no effort to slip into a reverie, to empathize intensively, to “merge” into something or someone else, to conjure up a memory with such clarity and vividness that the recollected situation seems to be taking place all over again.

Williams suggests that people with thin boundaries are more likely than others to have anomalous experiences. This is not because they have some sort of arcane psychical powers but because they literally take in more information at a pre-conscious level.

The Centrality of Emotion

In reflecting on all we have covered, I return to the centrality of emotion in the formation and expression of self. Emotion is elemental to our existence. It allows us to recognize other people’s state of mind and, just as often, signals to us the state of satisfaction with our own situations and lives. The expression of emotion cements bonds between people - far more than the transmission of thoughts and ideas. Emotion plays a pivotal role in our preconscious, as it flows and manifests in associations, imagery, and dreams. Ultimately, feelings are essential to judgments of self-worth and the meaning of our lives.

The people most sensitive to emotional energy are those whom the rest of us find the most difficult to understand. But, I submit, they have access to a gateway to greater understanding of our embodied existence and the universe we are born into. I am reminded of Donna Williams’ frequent mentions that she was afraid of feelings and repelled by touch for much of her life but that, just the same, she would “resonate” with people and places without conscious effort.

Michael A. Jawer is an emotion researcher and expert on “sick building syndrome.” He is the coauthor, with Marc Micozzi, of The Spiritual Anatomy of Emotion. He lives in Vienna, Virginia.

The Unseen Role of Emotion in Extraordinary States

More books from this author: Michael A. Jawer