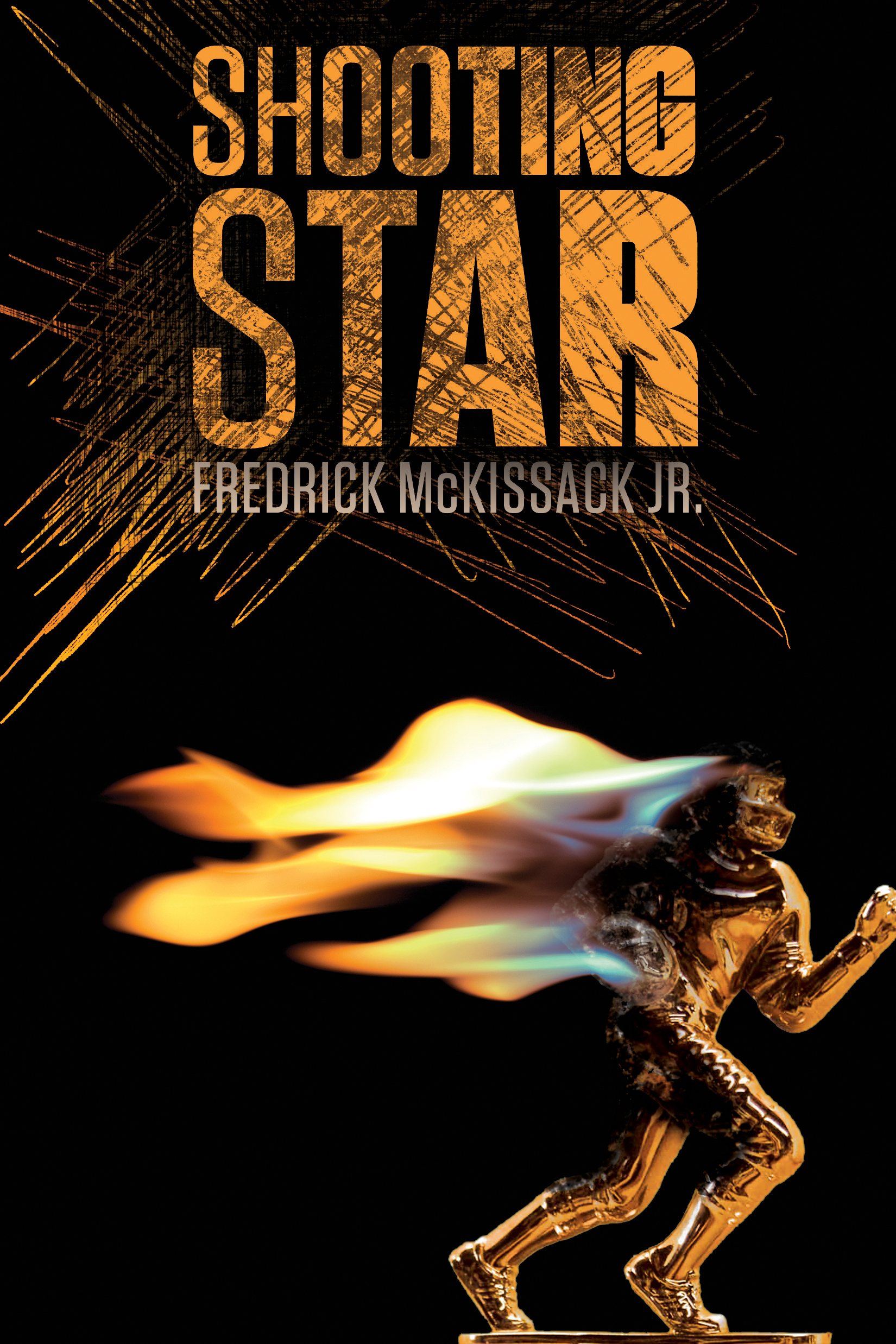 A natural-born athlete, Jomo Rogers has talent that is easy to spot on the football field, and reporters and college recruiters are taking notice. But the buzz is focused on his potential, on his promise, while Jomo is ready to become the “next big thing” now. And since natural talent can only take a player so far, Jomo supplements his abilities with tougher workouts, more weights, longer runs…and steroids.

An edgy and eloquent debut novel, Shooting Star brings sports headlines to life and shows how a young man’s drive can result in his downfall.

Chapter 1 01
Breathing is a natural process, yet Jomo Rodgers found himself flat on his back trying to remember how to do it. His first spluttering for air felt like someone was driving a spike through his chest.

His current condition, and his simple prayer for salvation, was understandable. He had sprinted twenty yards across the field to try to save a touchdown, only to be crushed by a vicious block delivered by a leviathan-cum-humanoid-now-fabulously-heroic farm boy.

Jomo stared up into the blackness of the cold November night. He could see his breath in the air, frustrated bursts of whiteness blown out in nonrhythmic spurts. The flash of flaring neurons in his frontal lobe caused the familiar illusion of stars bursting around him.

He felt and heard nothing after the initial blow. There was just stillness. Pain works at its own speed. Slowly, then quickly, he grew aware of each stab, throb, and burn.

Jomo took in each new sensation while lying like fresh roadkill. His fingers stung from banging against the leviathan’s helmet. He noticed the strangeness of sweat drying on his skin in the frigid air. It had been thirty-three degrees at game time. It was much colder now. Jomo flexed his right ankle, and the pain that surged through him could be quantified as several notches above Ow on a pain chart, but below Morphine cocktail, stat! His mouthpiece was gone. The salty taste of blood filled his mouth. His lip was busted, and there was a knot on the bottom of his tongue.

Jomo couldn’t seem to concentrate on anything outside his own head. It took him a moment to focus. It was Calvin Reynolds, a goofy, wide-eyed, big-butt defensive tackle. Calvin had gotten manhandled on the line, allowing the Madison County running back to fly out of the backfield for a sixty-yard touchdown. But more to the point for Jomo, if Calvin had done his job, Jomo wouldn’t be on the ground. At least that was how Jomo saw it.

“Dude, how many fingers am I holding up?” Calvin asked. His fingers were inches from Jomo’s face mask.

“Ass… hole,” Jomo managed in a tone that was less malicious than the curse implied.

Calvin rolled down his index and ring fingers, as well as his pinky, and then flipped his hand to give Jomo the bird.

“The answer was four,” he said, before thumping a knuckle onto the chest plate of Jomo’s shoulder pad. “You’ll live, bitch.”

Calvin and Dr. Hyde—the team’s physician who confirmed that Jomo was scrambled but not concussed—lifted Jomo off the turf. It was then that Jomo got a blurry look at the Madison County stadium scoreboard and saw the inevitable lightness of suckitude: fourth quarter, three minutes, thirty-five seconds left in the game; Cranmer 17, Madison County 40. Game over, season over. The team that had had so much promise just got punked big-time in the sectional final.

As he limped to the sidelines, Jomo raised his right hand in acknowledgment of the claps of support from the crowd, the opposing team, and his teammates. His embarrassment kept him from looking up.

Jomo lifted his head and grinned at Jayson Caldwell, his best friend, Cranmer’s star running back, and the most talented player on the team and possibly in the state. Jayson, who was hobbling over from the bench, had scored Cranmer’s only two touchdowns before going out in the middle of the third quarter with a groin strain; they nearly had to tape him to the bench to keep him from trying to get back into the game. Jayson had kept it close until he went out.

Jomo thought how odd it was that Jayson was even in a mood to talk. After losses, Jayson was usually nearly inconsolable. But this game, like the season, had worn everyone out.

Jomo plopped onto the cold metal bench. A team manager gingerly began taping an ice pack to his ankle.

“Damn,” Jayson said as he sat down next to him. He started sniffing the air. “Damn, I seriously think he knocked the shit out of you.” He smiled and tapped Jomo’s shoulder pad. “You a’ight, kid?”

“My hair hurts,” Jomo said, which made the trainer chuckle lightly but not loudly.

“I can’t help that,” the trainer told Jomo.

Jomo nodded and sucked in some cold air and took solace in the fact that he hadn’t been seriously injured. He thought about what he’d done right on this night—eleven solo tackles and two tipped passes. But he’d been torched on a long bomb that set up a touchdown and missed a tackle on third-and-long that sustained a scoring drive. From the first day Jomo had put on pads when he was a middle schooler, he had been told that Cranmer football was about results, and the philosophy was fairly binary: Wins are good, losses are bad. While coaches appreciate effort, the final score is all that matters.

“Do you remember them being this big last year?” Jomo asked. “I know I played against some of these guys in freshman football and they weren’t that big.”

“They either feed them a whole lot or…,” Jayson said, before shaping his fingers around an imaginary syringe and plunging it into his arm. Then he waved his hands in the air in disgust.

Juicing, Jomo thought. Figures. “Did Coach even do anything when I was lying out there?” Jomo asked.

“Nah,” Jayson said. “He was screaming into his headset about how busted the whole play looked. I thought he was going to have a stroke.”

Jomo was dumbfounded. Screw him, he decided as he eyed up Coach McPherson, who was still, even as the game was quickly coming to a close, barking out orders.

“Classic,” Jomo fumed, remembering Reginald McPherson’s concern when Jayson went down. Jomo took a swig of water, swished it around his mouth, and spit out a mixture of blood and water. “I ran my ass off to stop a touchdown. I got blindsided by some corn-fed guy who probably bench-presses tractors. What do I get? Not a damn thing. No clap. No back slap. No nothing. Screw him!”

“Yeah, well.” Jomo sighed. He took another gulp from the water bottle.

“Where’s the frickin’ punt team, for Pete’s sake?” McPherson was snarling, glaring at the team, slamming his play chart to the ground. “We’ve been four-and-out most the night, so you’d think you all would have this down pat.”

Jomo watched the mess before him. It was incomprehensible. McPherson’s teams were known for going down swinging. These guys were packing it in and didn’t care.

It didn’t get better. The line didn’t block, and Denny Walsh, normally a good punter, rushed his kick. It was a twenty-yard fluttering duck that rolled out of bounds, setting up Madison for good field position inside Cranmer territory.

One play later Madison scored on a screen play that made Cranmer’s players look like they couldn’t hit a tackling dummy. McPherson threw up his hands. Madison was pouring it onto Cranmer.

As loud and fierce as McPherson was, no one had ever heard him throw an F-bomb. Not on the field. Not on the practice field. Not in locker room or weight room. Not even in intense one-on-one sessions behind closed doors.

“Dawg. Did you…?” Jayson said, leaning into Jomo.

Jomo looked into the crowd. In the seats closest to the field behind the bench were Dr. Campbell—the head-master—and the trustees. They were a mass of stern looks and pursed lips. He wondered if they’d heard McPherson’s bomb, especially Campbell. Cranmer wasn’t the uptight place it had been in, say, the 1950s, but there was decorum to follow, and tossing F-bombs out loud was a no-no.

“It’s a funeral,” Jomo whispered to Jayson. “It’s his funeral.”

“Coach hasn’t won a state title in five years,” Jayson said. “We haven’t even had a team make it to semi state in four. Getting rolled at sectionals by Madison, shit, he’s got to be feeling the pressure.”

“I almost feel sorry for him,” Jomo said. “Almost.”

The football gods were whipping McPherson, he thought. The campaign would end with a 5–5 record, not bad for any other team that started seven sophomores, including at the key positions of quarterback and running back. In fact, with nearly the entire team coming back, most schools would be thrilled about the future. But this was Cranmer, where football was king. This was Cranmer, coached by a legend with eight state titles and double that number of conference championships. This was Cranmer, where the unofficial motto was “Winning is the thing.”

The crowd started counting down from ten; the game was coming to a merciful end. Jomo watched as McPherson sprinted out to shake hands with the opposing coach, then charged past a TV crew, a radio reporter, and two prep sportswriters and headed for the locker room. He rushed past the headmaster and trustees. He even blew off his wife.

“We are so dead,” Jomo said as they and the rest of the team shuffled along off the field. The comment was met with a chorus of groans, sighs, some light blaspheming, and scatological references.

“Boys,” began Trey McBride. Jomo rolled his eyes; Jayson looked straight ahead. Trey was the starting quarterback, and he’d been picked off three times. “There comes a time when a man stares at the abyss, and he sees himself…”

“Yeah, yeah. He sees himself looking back,” Jomo said. “No escape, finds out who he is, blah blah. Yes, we saw that movie in ethics class too.”

“No escape from the sustained and deserved ass whippin’ we are about to receive,” Jayson said as he hobbled toward the locker room.

“Ass whipping deluxe this way, brothers,” he added, pointing toward the visitors’ locker room door—it was also the girls’ locker room, made all the worse by the Madison County’s team nickname for its girls’ teams, the Lady Golden Beavers.

Jomo was close to making a joke, but he quickly changed his mind when he saw the stone-cold look on McPherson’s face. 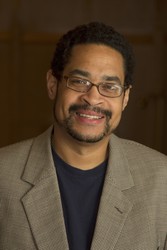 Fredrick McKissack has nearly twenty years experience as a writer and an editor. His articles, op-eds, and reviews have been published in The Washington Post, Vibe magazine, and others. He lives in Fort Wayne, Indiana, with his wife, Lisa, and their son, Mark.