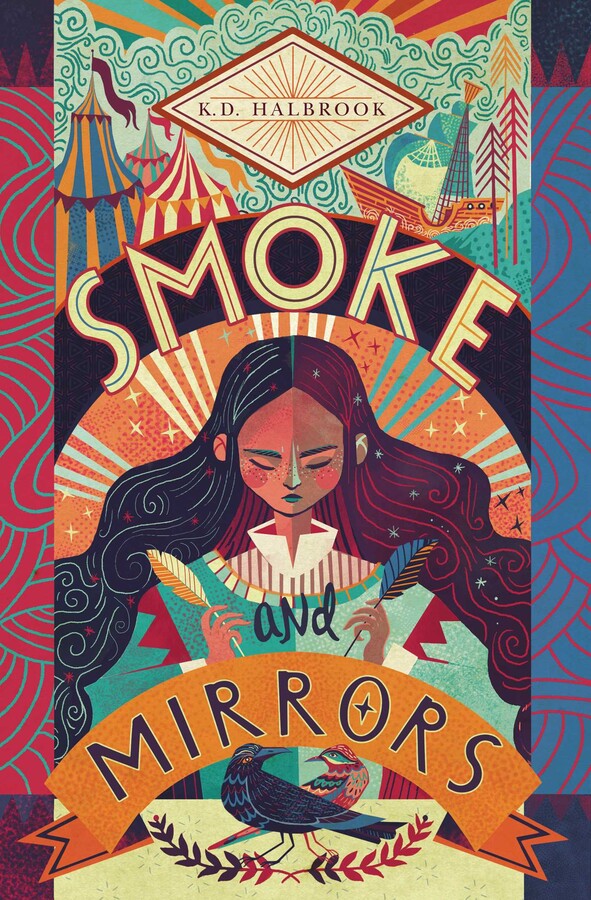 “Rewarding.” —BCCB (starred review)
“Enchanting.” —Booklist
“This is a story to savor.” —Kathi Appelt, National Book Award finalist and Newbery Honor–winning author of The Underneath and Keeper

Circus Mirandus meets Cartwheeling in Thunderstorms in this “Wrinkle in Time­–inspired…artful” (Kirkus Reviews) fantasy novel about a girl who must face her fears in order to right a terrible wrong, confront what it means to be different, and discover her own power.

Smoke has come to the Cirque Magnifique. And Sasha Brown is sure it is her fault.

Sasha has always loved the Cirque, a place filled with sequined costumes, dazzling spotlights, and magnificent tents. But when she starts fifth grade with the Islanders—the ordinary folk from the other side of the Island—for the first time, she starts to question her home and her Cirque family. Is the magic real? Are the stories even true? Faced with the Island kids’ bullying and scorn, Sasha isn’t so sure she wants to be a Cirque kid anymore, and the swirling, blue-gray Smoke appears.

One night in the big tent, Sasha’s dad performs, twisting his body through the air as the lights dance. Sasha is supposed to be helping, but instead she sits beneath the bleachers, seething. She wishes for the Smoke to come and make it all disappear: the Cirque, her family, the Island with its mean Island kids. And the Smoke does come. As Sasha watches her dad, he flips and raises his arms out for the bar that is supposed to meet him, his bright grin confident and sure. But there is only air…and Smoke.

Both of Sasha’s parents disappear that night, and it’s all Sasha’s fault. What can she do but try and find them—even if her journey takes her to the end of the world?

His hair was as black as night and slicked back, with a shine like the moon glinting off a smooth, obsidian beach stone. His body and arms and legs were black too, his long, skinny limbs wrapped in his night-colored bodysuit, with only two white stripes on his shoulders. His hands, only slightly less dark than his bodysuit, flexed in anticipation. He stood tall on the platform, so that it seemed he could reach the highest branches in an old cedar tree, but really all he held on to with his talon hands was the bar high, high overhead.

“Watch this, Sasha!” he called down.

Sasha looked up from her book, leaving her finger pressed against the last word she’d read. She stood with the ruby-red tent as the backdrop and watched her father leap from his nest, soar across the sky, release the bar, and fling himself into a triple twist. Sasha’s heart thumped painfully as her father emerged from his pretzel, too slowly it seemed, so that she gasped and cried out. Her book fell to the dirt-and-sawdust ground.

But just as Sasha thought he’d fall into the thick mat below the trapeze, he sprung open like a flower desperate for sun and reached for the bar Mr. Ticklefar had pushed toward him. Her father’s claws grasped and curled, and he soared to the opposite platform while Sasha caught her breath and tried to slow her racing pulse. His teeth gleamed as he grinned down at her.

“Little Chick,” her dad said from his perch. “Do you like the new trick? Won’t it wow the audience?”

“That’s not so scary. You know what’s scary? Opening yourself up to others to love with all your heart. But it’s the most wonderful thing too.” Sasha sighed and rolled her eyes, but Dad grinned. “Get changed and we’ll practice. Once we have it perfected, I plan to do it without a net.”

Sasha retrieved her book, forced a smile, and waved up at him. If his new trick frightened her, it would terrify the audience in that good, tingling way that made relief the most beautiful emotion of all.

In a moment Sasha’s mother stood next to Sasha. Her plumage was different from Sasha’s dad’s: an assortment of tropical colors beaded and sparkling on her leotard, and two slim, long, pale legs poking out below. On the weekend Sasha’s mother would wear a headpiece even more elaborate than the leotard, and weighing almost as much as her entire body, as she worked and twisted the rainbow of ribbons that dropped from the ceiling of the tent.

“Did you catch the timing?” Sasha’s mother asked, pressing a finger to her daughter’s elbow. Sasha’s muscles relaxed, and she smiled, for real this time.

Sasha dog-eared the corner of the page she had been reading and set her book on the bottom step of the stands. “Looks easy. Throw when his shoulders are highest during the second twist.”

“Right. Are you sure you don’t want me to show you up on the platform?”

Her mom plopped a kiss onto the top of Sasha’s head. “You always say that. And you’re usually right. My very capable girl.”

Sasha changed and climbed the ladder to the aerial platform, high in the big tent sky. When Sasha was on the platform, she felt gigantic. Strong. So tall that nothing could hurt her. Now the stands were empty, but on the weekends they filled so that everyone in the audience sat shoulder to shoulder, packed into every space. All those people watching her . . . silent and waiting . . . sent tingles up Sasha’s back. And when they applauded after she and Dad completed their tricks, she felt like royalty. A Cirque princess. But she knew that earning their admiration took lots of practice. So she held the bar, counting beats in her head to get the timing perfect. Far below, Mom waved and grinned at Sasha.

Dad waited on the platform opposite Sasha. Somewhere in the tent Aunt Chanteuse began to sing. Her songs were at times melancholy, pulling surprise tears from the audience, but at other times jovial and uplifting. That was how she sang now, trilling until her notes sounded more like laughter than music. Aunt Chanteuse could pull extra rainbows from the gossamer bubbles that floated around the tent as she sang, just as Madame Mermadia could turn plain old dust motes into dazzling, dancing fairies with a toss of her red hair. Just as Mom could send the sweetest, softest breezes throughout the tent as she twirled on the silk ribbons, and how Dad could turn a drumbeat into a bolt of lightning in the audience’s hearts. This was the magic of the Cirque, and Sasha loved being surrounded by it.

“Sashaaaaa, toss the baaarrrr,” Aunt Chanteuse sang into the upper reaches of the tent. Dad laughed, and Sasha couldn’t help but laugh too. She shook herself awake.

“Okay, I’m ready!” she shouted, pulling her arms back.

All through their practice, Sasha hurled the bar, learning the timing perfectly. Her parents applauded. Aunt Chanteuse sang. Mr. Ticklefar, the short ringmaster with the curled-ends mustache, tipped his hat and said, “Aha!” and “Well done!” Sasha filled, filled, filled with joy until she thought she would burst like a confetti cannon, spilling a rainbow of plastic-wrapped candies everywhere.

When the dinner bell rang, Sasha scrambled down the platform ladder. Mom helped her leap the last few steps, catching Sasha in her arms and laughing. There was always so much laughter at the Cirque. Some nights, as friends gathered in the cottages to tell stories—Mr. Ticklefar was the best, his stories of far-off travels told with the most ridiculous facial expressions—Sasha would have to hold her aching belly and gasp for breath for all the giggling everyone did.

Toddy, Sasha’s little brother, emerged from one of his many secret hiding places under the audience bleachers and took Sasha’s hand. The family walked to the dining tent together, followed closely by Mr. Ticklefar and Aunt Chanteuse. Along the way they caught up with Madame Mermadia and her children, Shelby and Griffin. They were all halfway through costume fittings, trailing strands of sequins behind them.

“Your arm’s falling off.” Sasha pointed at the length of fabric hanging from Shelby’s shoulder. Shelby was five years older than Sasha, and this was the first year Shelby would join her mom in the Magical Mermaid Lagoon performance.

“It feels like both of them are,” Shelby said. “My mom’s making me do strength training in the water tank. I hope there’s something good for dinner. I’m hungry enough to eat an elephant.”

“You look like an elephant,” teased Griffin, Shelby’s twin brother. Shelby reached for him, and Griffin bolted across the field to the dining tent, shrieking as Shelby chased after him.

“They’re getting so big,” Mom said, same as she did every time she saw Shelby and Griffin.

“They’re not the only ones.” Madam Mermadia tousled Sasha’s hair. “Are you excited about your first day of school tomorrow?”

Mr. Ticklefar, overhearing Madam Mermadia’s question, stepped forward. “She will astound them all!”

“It will be deeeliiightfulll,” Aunt Chanteuse sang.

But Sasha’s heart pounded harder than it had when she’d watched Dad do his new trick for the first time. Even though she was going into fifth grade, Sasha had never before stepped foot in a public school. She and Toddy had always been taught at the Cirque, learning their letters and numbers, as well as the lore of the Cirque; practicing science experiments in between helping Mr. Ticklefar take apart and repair machines; and almost always—for Sasha, at least—getting caught up in the fantastical worlds of her favorite books. But school would be different. She wouldn’t have Mr. Ticklefar’s stories to teach her geography, or Madame Mermadia’s lessons on oceanography. Would there be any magic at school at all?

Mr. Ticklefar always said the Cirque was the best place on earth, but there were important and useful things to learn in other places and from other people. Sasha’s parents agreed, and so she and Toddy were to start a new adventure in their education.

Sasha put on a brave face and talked bigger than she felt to Madame Mermadia. “It’ll be great.”

Sasha squeezed Toddy’s hand. The siblings shared a secret look and reluctantly smiled. It was good, Sasha thought. Having a brother. Taking these next steps with someone familiar by her side. Even if every moment at school was not-great, Sasha and Toddy would have each other.
K. D. Halbrook

K.D. Halbrook is the author of the critically acclaimed young adult novels Every Last Promise, which Kirkus Reviews called “lyrically written and ebbing with suspense” in a starred review, and Nobody but Us, which Booklist deemed “raw, immediate, and utterly unflinching.” Smoke and Mirrors is her first middle grade novel, and BCCB called it “rewarding” in a starred review. Halbrook is the cofounder of the popular website YAHighway.com and lives with her family in Seattle. She can be found online at KristinHalbrook.com and on Twitter @KristinHalbrook.