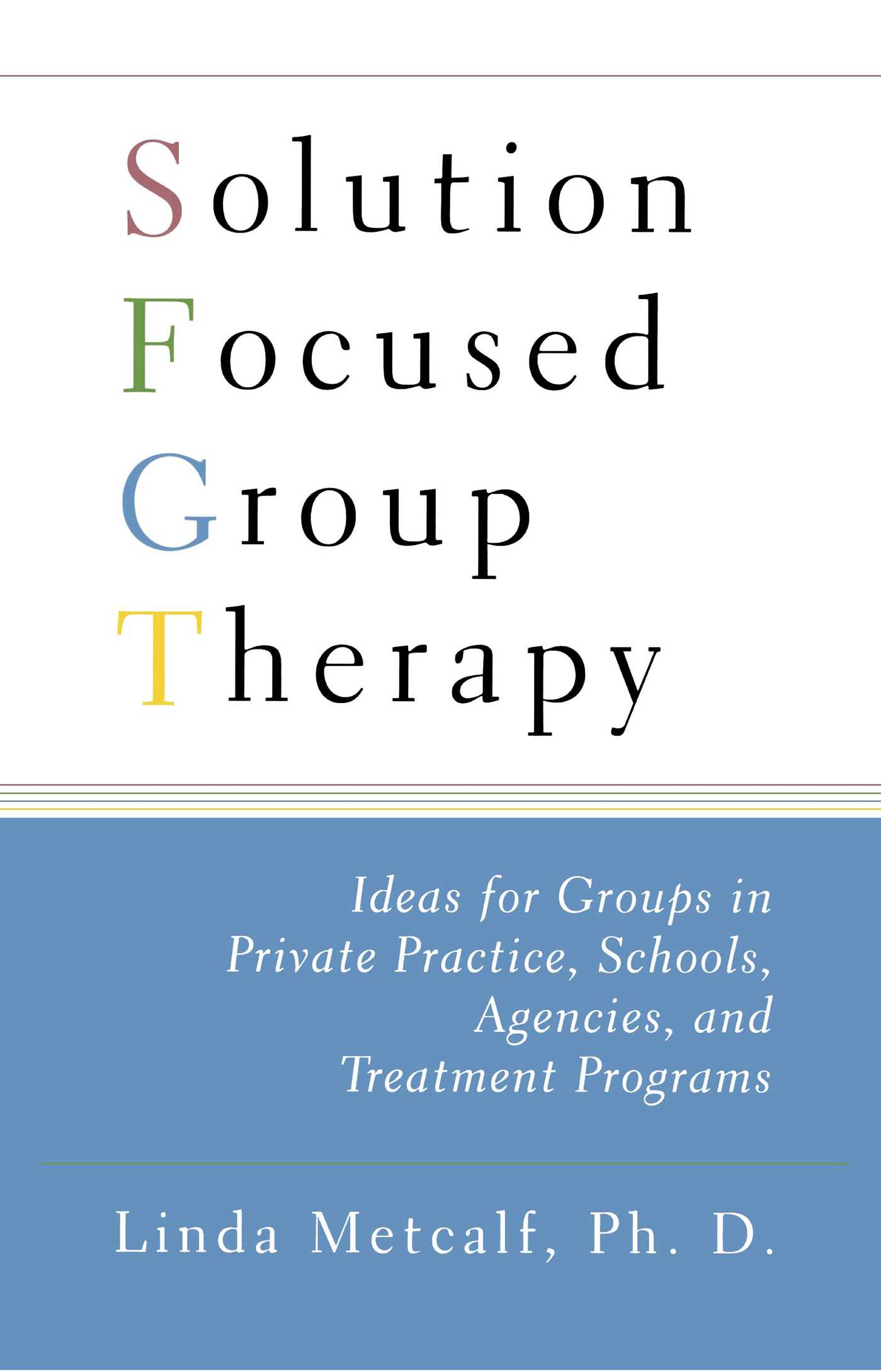 In our managed care era, group therapy, long the domain of traditional psychodynamically oriented therapists, has emerged as the best option for millions of Americans. However, the process can be frustratingly slow, and studies show that patients actually feel worse after months of group treatment than when they began. Can and should "the group" speed a person's progress? Now, in this "must have" book, marriage and family therapist Linda Metcalf persuasively argues that the collaborative nature of group therapy actually lends itself to time-limited treatment. She combines the best elements of group work and the popular solution focused brief therapy approach to create new opportunities for practitioners and patients alike.
Among the topics covered in this valuable guide are:

THE SOLUTION FOCUSED VERSUS THE PROBLEM-FOCUSED GROUP
The wise don't expect to find life worth living; they make it that way.
-- Anonymous
In psychodynamic group therapy, members reveal their issues, express their unhappiness or distraught feelings, relate to and confront others who feel as despondent as they do, and search for insight that might lead to new behaviors and actions. Over the years, I have learned from many clients that while these groups are supportive, they are also unproductive, continuing for months and sometimes years on end and focusing just on what went wrong in the past. Clients emerge from those groups with insight yet wearing their hearts on their sleeves and ready to rationalize and defend why they had their particular disorders or complaints. There seemed to be few actual strategies that developed within those groups; instead, psychodynamic therapists offered so-called proven strategies that were described as "the way to recovery." When clients returned to a group session without having tried such strategies, they were considered "not ready to change" or "resistant." (Some clients have told me that they often left such groups feeling worse than when they began attending them.)
When changing the direction of group therapy by integrating a solution focused approach, it is important for the therapist to give group members new ideas with which to construct new stories and to discourage them from adding to the pathological dialogue. For example, the change of atmosphere in the aforementioned adolescent group seemed to guide group members into more productive conversations, with more solution-friendly attitudes. However, the change took time and constant coaching and redirecting on my part to keep group members on a solution track instead of a problem track. Normally, the teens were told what they needed to do by the technicians and therapists. Dylan, for example, was told not to "stuff " his feelings. He previously lacked the confidence and self-awareness to understand his own competency, making him dependent on staff to solve his problems. Treatment was typically prolonged, since clients were not discharged until they performed the behaviors the treatment team decided they should perform. I offered Dylan an opportunity to become the sole expert on his life. This was a new process that sparked his curiosity and interest and pushed his participation to the next level. He began to respect himself in an environment that promoted such respect. When the group took a new direction, Dylan's apparent change of attitude, his new self-respect and positive beliefs about himself, became contagious.
I believe that people enjoy being part of a solution focused process group primarily because it helps them find a comfortable place in the world, one in which their problems do not seem to take over. Such a safe experience offers an oasis to even the most despondent client. Despondent clients are more likely to give up their pathological descriptions when they discover that such descriptions are not going to be discussed. Instead, clients are invited to revisit the past and reminisce about the times when life was better. This experience often has the same uplifting effect as looking at old photographs of loved ones. As clients recall more pleasant times, they realize that life was not always so difficult; as each member hears others make this discovery, a kinship develops within the group, creating an atmosphere of hope. As clients realize that they have had successes in life, whether in the past or in dealing with a current situation, they seem to enjoy the idea that others, namely, fellow group members, have noticed such success. In solution focused group therapy sessions, the group helps to define the direction for its members to follow, validating and giving permission to each member to try new strategies.

A BRIEF HISTORY OF SOLUTION FOCUSED BRIEF THERAPY
If you are not part of the solution, you are part of the problem.
-- Eldridge Cleaver
Traditionally, when clients came to therapy, they did so with a desire to understand how their lives went wrong. They looked to therapists to give them explanations in the hope that understanding the root of the problem would tell them what to do differently in order to correct the problem. Thus, therapists oriented themselves in the past instead of the present and searched for why problems occurred, that is, for information they could give their clients. For some action-oriented clients, such explanations motivated them enough to try the strategies handed down to them by their therapists. For other clients, such explanations gave them more reasons to feel and act incompetent. When Milton Erickson began working with clients in the mid 1950's, he took a new approach to therapy, one that offered new ideas for therapists to consider. "He addressed himself consistently to the fact that individuals have a reservoir of wisdom learned and forgotten but still available. He suggested that his patients explore alternative ways of organizing their experience without exploring the etiology or dynamics or the dysfunction."
With this new approach emerged a new sort of client: one who could leave therapy with identified tools to solve future problems independently. The therapist became someone who helped the client access these resources and put them into use. This respectful stance became one of the basic constructs of solution focused brief therapy. However, the solution focused approach was still years away, even though a brief therapy was emerging on the West Coast.
At the Mental Research Institute, John Weakland, Richard Fisch, Paul Watzlawick, and others worked with clients within a time limit of ten sessions. Their purpose was to reorganize the thinking of clients instead of trying to promote insight. In the view of the therapists at MRI, problems occur when the actions in life are mishandled. The greater the effort a person makes to try to solve the problem through inappropriate actions, the more entrenched the problem becomes and the less responsibility the person takes to solve it. The problem-focused approach involves thinking that problems are interactional and can best be solved when clients do something different around the problem.
In the 1980s, solution focused brief therapy took a different turn in reference to how problems are viewed. Steve de Shazer and his team at the Brief Family Therapy Center in Milwaukee began looking at "what has been working in order to identify and amplify these solution sequences." In this approach, the recognition that a client's problems do not constantly occur encouraged therapists to focus on those problem-absent times as exceptions and to investigate which features of those times could be used in constructing a solution to the presenting problem. By identifying the specific interactions, behaviors, and thinking that helped them in past situations, clients were more apt to regard themselves as competent and to realize that they could solve their own problems with minimal assistance. Therapeutic tasks began to develop from these exceptions that clients presented to their therapist. The therapist's task became one of creating opportunities for clients to see themselves as competent and resourceful. Sometimes that meant asking a client to observe for a few days the times when the problem occurred less often; other times the client was to carry out small, specific tasks that he identified as helpful in dissolving the problem. With these new, less intrusive actions, the therapist assumed a less directive role. In believing that clients are the expert on their own life, the solution focused therapist became a sort of facilitator, guide, or assistant to the client; the purpose of such a therapist was to create opportunities for clients to see themselves as the expert on their own life.