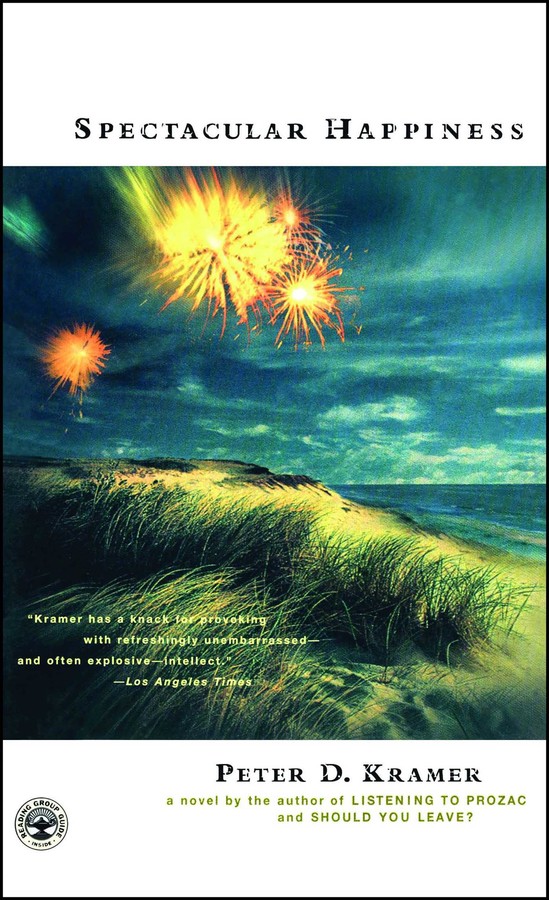 In his bestselling Listening to Prozac, Peter Kramer asked how much happiness we have a right to expect, and how quickly we should demand it. In Should You Leave? he questioned whether trading up has replaced loyalty in intimate relationships. Critics have praised his intellect and writing, comparing him to Roth and Updike, and have anticipated his turn to fiction.
Now Kramer has made that transition. Spectacular Happiness is a daring, controversial novel about what constitutes the good life. Chip Samuels is a community college teacher and handyman on Cape Cod, loyal to the radical values his wife, Anais, introduced him to in the sixties. A patient husband and, above all, a loving father, his world has been shattered by Anais's decision to run off with their son in search of a more conventional life devoted to getting and spending.
Spectacular Happiness opens when Chip is named as the chief suspect in a series of anarchist bombings of beachfront trophy homes. Meticulously planned, announced with fireworks, these explosions have caught the public imagination, and the irony is that Chip, now an outlaw-celebrity, is drawn into the publicity-based culture he is aiming to disrupt. His response: to assemble a memoir for his estranged son, a father's attempt to explain his motivations before the media distorts them.
Chip has splendid allies: Sukey Kuykendahl, an upper-class Realtor with weaknesses for alcohol and overbearing men; Wendy Moro, a self-effacing defense attorney thrust into the limelight; and Manny Abelman, an aging psychotherapist disenchanted with his profession. But it is Chip's own voice that dominates the novel, concerned, searching, painfully aware of the absurd behaviors love can demand.
Darkly intelligent, Spectacular Happiness will alter the way we look both at oversized beachfront mansions and at the culture that spawns them, the culture Chip calls the society of the spectacle. Provocative, compelling, stunning in its execution, this is the masterful first novel that Kramer's nonfiction has led his readers and reviewers to expect.

Reading Group Guide for Spectacular Happiness
Though it is built around the elements of a comic thriller -- explosions, mobsters, federal agents, and a man on the run -- Spectacular Happiness proves to be a romance and a thoughtful exploration of the nature of happiness: What sort of private contentment is possible in a culture focused on achievement, accumulation, and celebrity?
Discussion Points
1. How does the form in which this novel is written -- a series of diary entries by the protagonist -- enhance the story it tells? Does it succeed in focusing attention on the book's central themes of intimacy and disrupted family life? How would the novel and our response to the main character be different if its narrative were told more conventionally -- in the third person, for example?
2. In his "interventions" on beachfront homes, Chip claims to take care to avoid harming people -- to create absurdist theater. Is Free the Beaches a terrorist movement? To what range of activities can the tem terrorism apply? How do you think Chip's actions would be received in the current climate?
3. Chip tells us his therapist felt he was too timid and withdrawn. "When will you swing boldly into life? he asked. I have tried of late to answer that challenge" (pages 44-45). Chip discusses a number of philosophical motives behind the Free the Beaches movement, but might there be psychological explanations for his behavior, as the above quote suggests? Are there motives that Chip does not himself acknowledge?
4. One of the professed targets of the Free the Beaches movement is the "society of the spectacle," which American capitalism creates. When Chip strikes a deal to appear as a commentator on television, does he compromise his opposition to spectacle? Or, does he cleverly turn the weapons of capitalism inward? Is Chip's public success a victory or a defeat for his ideals?
5. "For as long as I can remember, I have found literature a reliable companion, surely the best guide to how we live when we are by ourselves" (page 23). How does Chip's devotion to literature inform his character? Does literature illuminate Chip's world or lead him astray?
6. "I find destruction to be an alternate form of collecting. A way to invite consideration of objects, their origin and function. Destruction preserves a culture at a moment, its artifacts, on videotape and in memory" (page 68). How is the Free the Beaches movement an act of preservation or documentation? Can destruction represent a valid form of political or creative expression?
7. "A man needs a calling and an awareness that it is a calling. As a specific against the nausea caused by tasks and goals the society imposes..." (page 77). Does Chip turn to destroying houses to express inner feeling -- rage over his wife's leaving with his son, or ennui with an emotionally empty existence -- or does it represent his vocation, the project toward which his life has been building?
8. "But then radicalism rests on the assumption that normative behavior can be deranged. Who, taking any distance from his life, would choose to be as inattentive to moral consequence as the average successful American?" (pages 83-84). Is it fair to say that the behavior of the average successful American is morally inattentive? Is the Free the Beaches movement justified in its attempt to waken citizens to the moral consequences of consumerism?
9. Chip's "summer of reading" shows him to be a dedicated parent. Is his later acquiescence to Anias -- when he lets her take their son, Hank -- a fulfillment or an abdication of the role of the devoted father?
10. When Hank's elementary school teacher wants him to start taking Ritalin, Chip stubbornly resists. Does Chip's refusal reflect, or contradict, the author's uneasy relationship with psychiatric medication as explored in Listening to Prozac?
11. "[F]rom early days I had subscribed to Miss Havisham's formulation, that real love is blind devotion, unquestioning self-humiliation, utter submission" (page 120). How do Chip's feelings for Anais influence his behavior after she leaves him? Is the romantic ideal viable in a culture with practical values and a fifty percent divorce rate?
12. "Arguments about justice trouble me. In an unjust society there is no privileged spot from which the right can be seen, as regards individuals" (page 178). Chip claims that his project is not intended to render justice against the homeowners. What, then, is his intent? Is he successful?
13. Why does Chip consider the famous destruction of the Woodcock house a failure and his first mistake? Is he right? What does this judgment say about his personality?
14. In the second section, "Celebrity," the novel becomes more openly satirical. Does the portrayal of Chip's ascension to fame -- the televised limousine ride, the sympathetic demonstrators, the Today show appearance -- succeed in broadening the novel's scope? What do the comic scenes suggest about the role and nature of celebrity today?
15. In the last section of the novel, Chip must revert from lawless saboteur to responsible father. He contrasts the roles by claiming that the task of fatherhood is "averting the improbable catastrophe." But are there ways in which Chip's anarchism prepares him for fatherhood? Do we imagine him a better father in the end than he was during the "summer of reading"?
16. Does the book have a happy ending, or is it bittersweet? Is Chip's reunion with Anais a victory? Is Chip right when he says that imperfect or compromised contentment is the best one can hope for at this moment in history?
Peter D. Kramer

The Boston Globe The author of Listening to Prozac makes a fine novelist, telling a gripping story while at the same time commenting on the rich, radicals, politics, corruption, and the media.

Newsweek A serious novel of ideas.

Chicago Tribune A terrific thriller plot...Kramer has a perceptive eye...in the small, telling details he chooses for his portraits.

The Seattle Times This novel is a feast of big ideas, memorable characters, and heroic actions. It is a phenomenal fiction debut.

The Christian Science Monitor The effect is something like reading Jaws from the shark's point of view....It's wacky and wicked and brilliant.