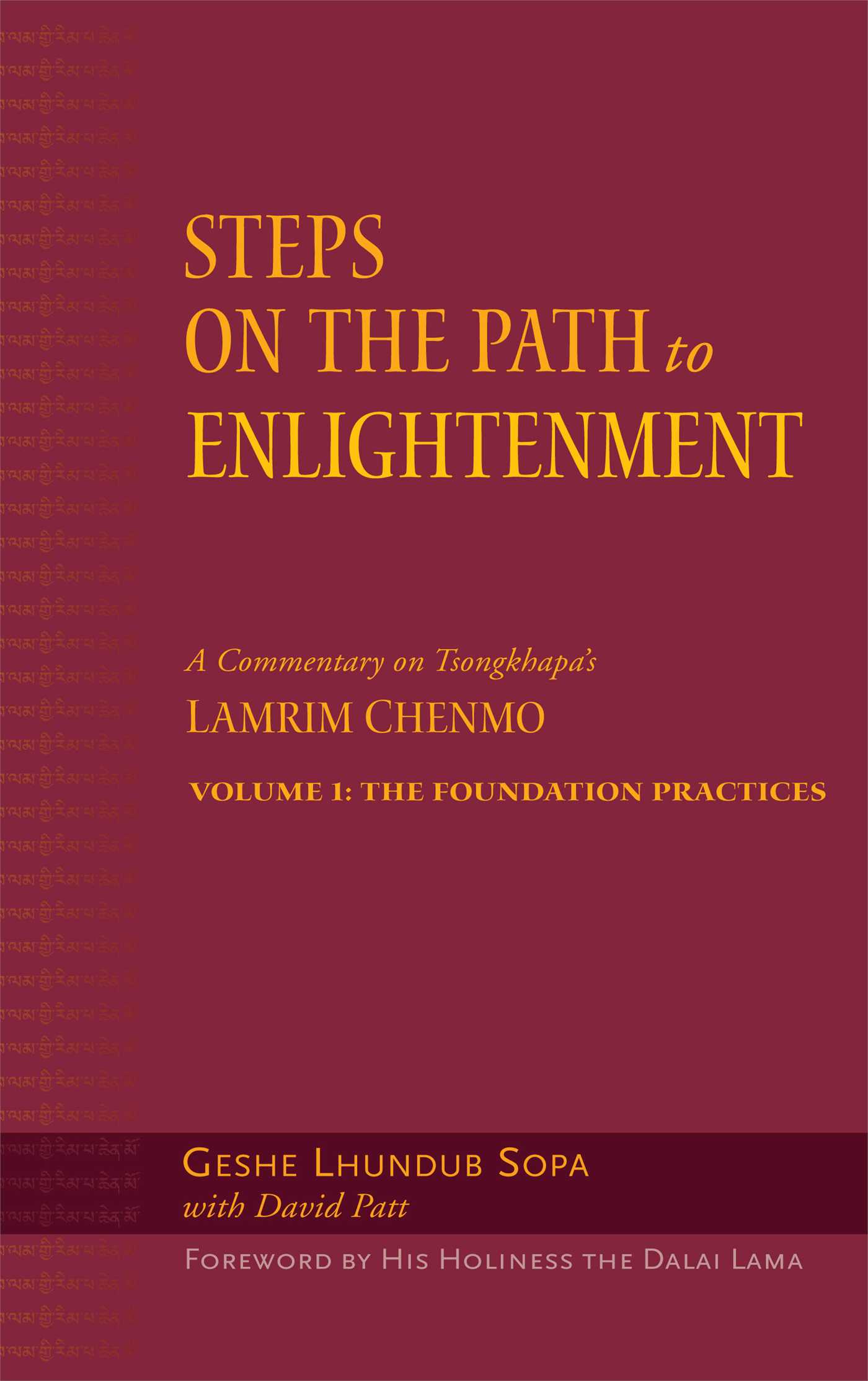 Steps on the Path to Enlightenment

A Commentary on Tsongkhapa's Lamrim Chenmo, Volume 1: The Foundation Practices

Steps on the Path to Englightenment: The Foundation Practices marks the first volume of a much-anticipated, comprehensive commentary on the Lamrim Chenmo by the renowned Buddhist scholar, Geshe Sopa.

This landmark commentary on what is perhaps the most elegant Tibetan presentation of the Buddhist path offers a detailed overview of Buddhist philosophy, especially invaluable to those wanting to enact the wisdom of the Buddha in their lives.

In the Lamrim Chenmo, Tsongkhapa explains the path in terms of the three levels of practitioners: those of small capacity who seek happiness in future lives, those of medium capacity who seek liberation from the cycle of suffering, and those of great capacity who seek full enlightenment in order to benefit all beings. This volume covers the topics common to the first level: Tsongkhapa's explanations of the role of the teacher, his exhortation to take the essence of human existence, the contemplation of death and future lives, and going for the refuge.

Given his vast knowledge and his experience in both Tibetan and Western contexts, Geshe Sopa is the ideal commentator of this work for the modern student of Tibetan Buddhism.

"From my first encounter with Professor Geshe Lhundub Sopa in 1962, I have been impressed with his kindness, patience, and thorough-going scholarship, qualities so strong that they obviously are based on profound realization. When he received his Geshe degree, he graduated first among the first rank, emerging as his year's national hero; he truly embodies what being a well-versed Tibetan scholar requires-the ability to think and react within many different systems. His good-humored, compassionate persistence and forbearance over the course of his long and often difficult life shine throughout the heartfelt, practical explanations in these books."

– Professor Jeffrey Hopkins, author of Cultivating Compassion, and translator of The Dalai Lama's How to Practice

"Geshe Sopa is one of the great living lamas we have today."

– Lama Surya Das, author of Awakening the Buddha Within

"Those of us fortunate to have studied directly with Geshe Sopa well know what an inexhaustible fount of Buddhist learning and wisdom he is. With the publication of Volume II of his comprehensive commentary on Tsong Khapa's classic Lamrim Chemmo, a much wider audience will further benefit from these unending riches. This text presents the mature development of Indian and Tibetan Mahayana Buddhism--the shortcomings of cyclic existence, the three trainings of mind, the importance of renunciation and generating the thought of awakening, etc.--not just by skillfully explicating what the teachings have to say but even more importantly by illustrating how they should be practiced. As Geshela himself says, 'This is not just a theoretical understanding we are talking about, but a realization that leads to direct transformation of your daily life and the behavior of your body, speech, and mind.' In particular, this volume clarifies the complex but crucial relations between the obscuring afflictions (klesha) and the accumulation and fruition of karmic actions--explanations supported, as throughout this rich text, by copious citations from the great classics of Indian and Tibetan Buddhist literature and enlivened by traditional figures whose lives illustrate the wonderous workings of karma. This text will appeal to practitioners and teachers alike for its comprehensive and crystal-clear presentation, in a direct and down-to-earth style, of one of the great encyclopedic texts of Tibetan Buddhism."

"My first real exposure to the great textual tradition of Tibetan Buddhism was through Geshe Sopa's lectures on the Lamrim. It is no overstatement when I say that studying Tsongkhapa through the teachings of one of the greatest living scholars of the tradition indelibly changed my life. And now 'here we are,' as Geshela says in the opening line to this great work. Here we are indeed, more than a quarter century later, in the presence of this vibrant text, a superbly edited compilation of Geshela's lectures. Read it and you will see that his words still sparkle, and that his wit, insight and erudition come through on every page. But read these volumes slowly, savoring them. Make them last, so that they become for you what they have become for so many of Geshela's students throughout the years: a source of tremendous intellectual excitement, and untold spiritual nourishment."

"Western students will welcome Geshe Sopa's Steps on the Path to Enlightenment, and [also] Yangsi Rinpoche's Practicing the Path. They will serve their readers as indispensable companions to Tsongkhapa's elegant and elaborate Great Exposition on the Stages of the Path, without which the entry into a text of such rigorous thoroughness may seem overwhelming. Students newer to the endeavor will receive a wonderful education from reliable guides. All of us will find our attention focused upon matters of importance."

– Buddhadharma: The Practitioners' Quarterly, in a joint review of Wisdom's two recent books on the La

Steps on the Path to Enlightenment

A Commentary on Tsongkhapa's Lamrim Chenmo, Volume 1: The Foundation Practices