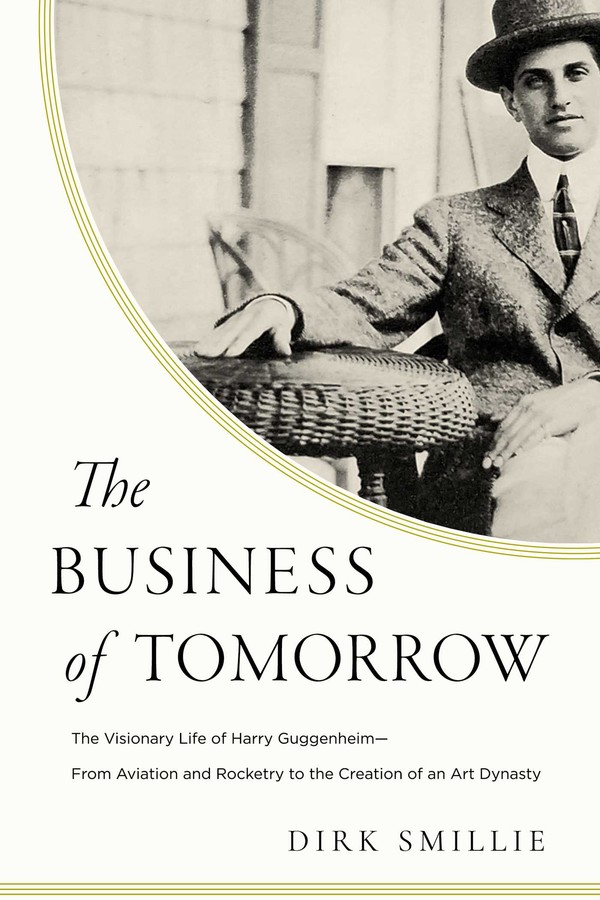 The Business of Tomorrow

The Visionary Life of Harry Guggenheim: From Aviation and Rocketry to the Creation of an Art Dynasty

A veteran Forbes journalist brings to life the brilliant and complex Harry Guggenheim in the first-ever biography on this groundbreaking American figure.

But who was behind this epic sphere of influence? It took three generations of Guggenheims to build the wealth in its first era. Yet it was the singular force of Harry Guggenheim who would guide the family’s next generation of businesses into modernity. Part angel investor, part entrepreneur, part technologist, Harry launched businesses whose impact on 20th century America went far beyond the Guggenheims’ mines or museum. His visionary investments continue to profoundly influence our world and hold valuable business lessons for billionaire dynasty builders like Jeff Bezos and Elon Musk.

A flawed but brilliant man, Harry Guggenheim was the confidante to five American presidents and a key financial force behind commercial aviation and space exploration, two innovations that catapulted the nation into the future.

With unprecedented archival access, Dirk Smillie astutely examines Harry’s business acumen, intellectual curiosities, and the world he lived in.  Whether it was his paradoxical friendship with Charles Lindbergh or his dynamic and ambitions family members, Smillie puts Harry’s life and work in rich context.  Epic and intimate, The Business of Tomorrow reveals the fascinating life of an American icon.

Dirk Smillie is a former senior Forbes reporter who has also worked at Guggenheim Partners. He is the author of Falwell, Inc. and lives in New York City.

Figures like Charles Lindbergh and Amelia Earhart were the early stars of American aviation. Harry Guggenheim was its engine. Dirk Smillie’s The Business of Tomorrow sheds important light on 20th-century American history. This is what biography should be—it looks at a period of history through the lens of a single remarkable life.

"Jazz Age eccentric multimillionaire Harry Guggenheim comes to life in this deep dive from Smillie, a senior reporter at Forbes magazine. Smillie covers his adventures in Mexico’s deserts, his subsequent ventures bankrolling promotional campaigns with Charles Lindbergh, his position as the U.S. ambassador to Cuba, and his investments in early aviation. But, Smillie shows, it was conquering the world of art that proved to be Guggenheim’s biggest challenge. Well-researched and breezy, Smillie successfully creates a page-turning look at the power of wealth set against the backdrop of political turmoil, prohibition-era parties, and groundbreaking technological developments. History buffs will enjoy this comprehensive account."

"Smillie, a former senior reporter for Forbes who also served as chief content officer at Guggenheim Partners, offers a lively portrait of entrepreneur and philanthropist Harry Guggenheim (1890-1971)—a man of impressive achievements and staggering wealth. [The Business of Tomorrow] recounts Harry’s public roles and political influence: his financing of technology breakthroughs to advance the air age and funding of Robert Goddard, father of modern rocketry. He served as ambassador to Cuba during a time of turmoil on the island; co-founded the Pulitzer Prize-winning Long Island newspaper, Newsday; bought and raced thoroughbreds; and oversaw the building of the Guggenheim Museum, which had been his uncle’s dream…A brisk, well-researched biography."

“Impressively reported and brilliantly written. The Captain was worthy of such treatment.”

“If the news media were covering Harry Guggenheim today, he’d be a cross between Jeff Bezos, Steve Jobs and Rupert Murdoch. Dirk Smillie’s book is a superbly animated story about an aristocratic futurist from the past. The Business of Tomorrow takes the reader on a plane ride and then a rocket ship with one of the American Century’s most compelling, and lesser-known subjects.”

“The birth of the Guggenheim Museum comes alive through the pages of this well researched biography.  Harry Guggenheim was able to fulfill the dream of Frank Lloyd Wright and Solomon Guggenheim while having the vision to build the collection into one of the most powerful and iconic museums in the world.”

“Without Harry Guggenheim’s leadership, it is doubtful Frank Lloyd Wright’s masterpiece museum would have happened.”

“A meticulously researched and beautifully written account of the life of Harry Frank Guggenheim, a modest yet absolutely critical figure in the development of aviation in this country. He was also a lifelong, steadfast friend to my parents, Charles and Anne Lindbergh, from the time of their earliest adventures as aviation pioneers throughout their long marriage and often complicated lives. Harry Guggenheim richly deserves this excellent biography. It is a real pleasure to read.”

The Business of Tomorrow

The Visionary Life of Harry Guggenheim: From Aviation and Rocketry to the Creation of an Art Dynasty