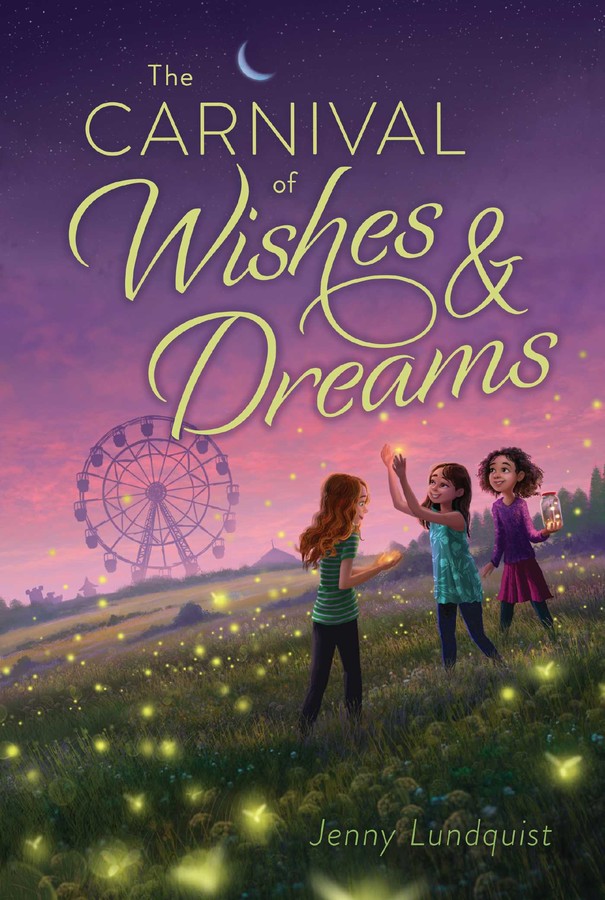 In the tradition of Wishtree and You May Already Be a Winner, this hopeful middle grade novel tells the story of three former friends who must come together at their annual town carnival to heal and reconnect after a tragedy.

The small town of Clarkville has seen better days. Ever since the Cohen factory burned down a few years ago, jobs are scarce and unemployment is high. But each year for one night the Carnival of Wishes and Dreams comes to town and everyone gets to indulge in a little wonder and delight. And for three girls who each receive notes asking them to meet the anonymous sender at midnight at the Ferris Wheel, it’s an evening that promises to be truly magical.

Audrey McKinley can’t believe someone would ask her to ride the Ferris Wheel. Everyone in town knows she’s afraid of heights; the last time she rode the Ferris Wheel it ended with her having a panic attack. But ever since her dad lost his job after the Cohen factory burned down he’s been working too little. The carnival gives him a chance for some seasonal work, and she plans to spend the evening checking up on him and making sure he does his job. Maybe she’ll face her fears tonight, after all.

Harlow Cohen is surprised anyone would want to ride the Ferris Wheel with her. Harlow used to be popular. But ever since her grandparents’ old factory burned down and so many people lost their jobs, many of the kids at school blame her—and her rich family—for their own parents’ worsening economic situations. Harlow can never resist a dare, but when a note arrives asking her to meet an anonymous person at the Ferris Wheel at midnight, she’s far from certain it will be a friend waiting for her.

Can these three girls put their differences aside long enough for their wishes to come true? And is it possible to save a friendship that once seemed lost for good?

1 Audrey 10 HOURS TO MIDNIGHT
COME TO THE CARNIVAL OF Wishes and Dreams. Meet me at the Ferris wheel at midnight. We’ll ride it together.

Audrey McKinley stared at the message on the pumpkin gram she’d just received and blinked. She didn’t need an invitation; of course she was going to the carnival tonight. Everyone in Clarkville was going. It was the biggest social event of the entire year.

She twisted a strand of curly red hair around her finger and examined the rest of the note. Her name was written in big block letters in the space next to the “To” section. But the space next to the “From” section was blank. Had the sender just forgotten to sign their name? Or was the note intended to be anonymous?

Pumpkin grams were a big fall tradition at Clarkville Middle School. Students paid a dollar to write a special note to their friends on orange construction paper pumpkins, which were delivered at the end of the school day, a few hours before the carnival opened. The whole point was to know who sent them. To know who your friends were and just how many you had.

Seriously, why even bother sending one if you weren’t going to sign it?

Audrey glanced up and looked around Miss Prescott’s seventh-period math class. In the seat in front of her, Grace Chang was staring off into space. She considered asking Grace what she thought about the pumpkin gram, but since Audrey and Grace weren’t supposed to talk to each other anymore, she decided against it. The members of the student government were still making deliveries, so she flagged down Lucas Carter, who had dropped the pumpkin gram on her desk.

Lucas shook his head. “Maybe you have a secret admirer.”

An anonymous note. A secret admirer. These were mysterious, wonderful things. But the message itself was not wonderful.

Audrey loved the Carnival of Wishes and Dreams—the fall festival that blew into town for one magical night every October. She loved the gold-and-crimson-striped tents; the carousel that some people swore could grant wishes; the way the carnival lights frosted everything with a golden glow; the way the whole evening smelled like popcorn and roasted peanuts. This year she especially loved that her dad had gotten a job operating one of the rides. It was good money, and she hoped they’d be able to make rent this month instead of falling behind again.

The only thing she didn’t love was the Ferris wheel. She was afraid of heights—everyone in town knew that. Last year when she’d tried to ride it she’d had a huge panic attack. She’d been sitting with Harlow Carlson—back when they were all still friends with Harlow—and Harlow had tried to keep her calm until their cart reached the bottom. After that, Audrey swore she’d never ride it again.

She made a quick list of everyone who had already sent her a pumpkin gram. It was a respectable haul, but still, none of that respectable haul included a pumpkin gram from Julia King, her best friend. Julia had been acting a little weird lately—maybe the message was her idea of a joke? Audrey pulled out her phone and texted Julia, who was sitting three seats up in the front row.

Julia texted back: What’s not funny?

The message you sent, Audrey answered.

Julia twisted around in her seat and mouthed, What?

In response, Audrey held up her pumpkin gram and frowned.

Julia pretended to smack her forehead, and a few seconds later, she sent another text: Totally forgot to send you one.

Julia forgot to send her a pumpkin gram? Audrey knew for a fact that Julia had sent twenty pumpkin grams. So how could she forget to send one to her own best friend?

Audrey could only send five this year. She’d had to spend most of the birthday money Aunt Lisa gave her on groceries—and even then she’d felt bad about keeping five dollars for herself. It could have meant a couple extra boxes of cereal in their bare pantry, but instead she’d used it for pumpkin grams.

She looked down at the message. If it wasn’t from Julia then it had to be from someone else. Someone who wanted to meet her at the Ferris wheel at midnight tonight.

Jenny Lundquist is the author of The Charming Life of Izzy Malone, Seeing Cinderella, and Plastic Polly. She grew up in Huntington Beach, California, and earned a degree in Intercultural Studies at Biola University. Jenny has painted an orphanage in Mexico, taught English at a university in Russia, and hopes one day to write a book at a café in Paris. Jenny and her husband live in northern California with their two sons and Rambo, the world’s whiniest cat.