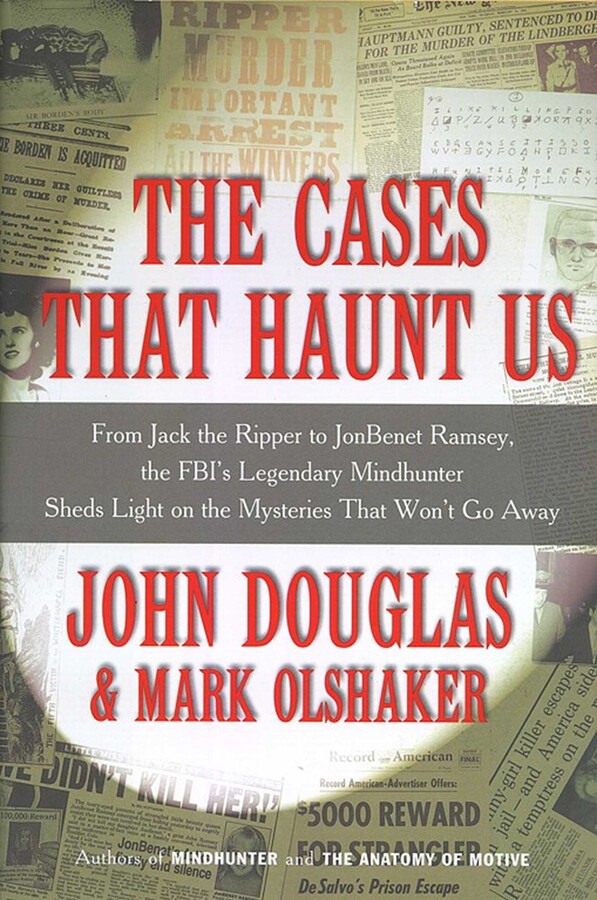 From Jack the Ripper to Jon Benet Ramsey, The FBI's Legendary Mindhunter Sheds New Light on the Mysteries That Won't Go Away

America's foremost expert on criminal profiling provides his uniquely gripping analysis of seven of the most notorious murder cases in the history of crime -- from the Whitechapel murders to JonBenet Ramsey -- often contradicting conventional wisdom and legal decisions.
Jack the Ripper. Lizzie Borden. The Zodiac Killer. Certain homicide cases maintain an undeniable, almost mystical hold on the public imagination. They touch a nerve deep within us because of the personalities involved, their senseless depravity, the nagging doubts about whether justice was done, or because, in some instances, no suspect has ever been identified or caught.
In The Cases That Haunt Us, twenty-five-year-FBI-veteran John Douglas, profiling pioneer and master of modern criminal investigative analysis, and author and filmmaker Mark Olshaker, the team behind the bestselling Mindhunter series, explore the tantalizing mysteries that both their legions of fans and law enforcement professionals ask about most. Among the questions they tackle:
Was Jack the Ripper actually the Duke of Clarence, eldest grandson of Queen Victoria, or perhaps a practicing medical doctor? And did highly placed individuals within Scotland Yard have a good idea of the Ripper's identity, which they never revealed? Douglas and Olshaker create a detailed profile of the killer, and reveal their chief suspect.
Was Lizzie Borden truly innocent of the murder of her father and stepmother as the Fall River, Massachusetts, jury decided, or was she the one who took the ax and delivered those infamous "whacks"? Through a minute-by-minute behavioral analysis of the crime, the authors come to a convincing conclusion.
Did Bruno Richard Hauptmann single-handedly kidnap the baby son of Charles and Anne Morrow Lindbergh, the most famous couple in the world, or was he an innocent man caught up and ultimately executed in a relentless rush to judgment in the "crime of the century"?
What kind of person could kill six-year-old JonBenet Ramsey on Christmas night in her own home? Douglas was called in on the case shortly after the horrifying murder, and his conclusions are hard-hitting and controversial. Why, in the face of the majority of public, media, and law enforcement opinion, including former FBI colleagues, does Douglas believe that John and Patricia Ramsey did not murder their daughter? And what is the forensic and behavioral evidence he brings to bear to make his claim?
Taking a fresh and penetrating look at each case, the authors reexamine and reinterpret accepted facts and victimology using modern profiling and the techniques of criminal analysis developed by Douglas within the FBI. This book deconstructs the evidence and widely held beliefs surrounding each case and rebuilds them -- with fascinating and haunting results.

Mark Olshaker is a novelist, nonfiction author, and Emmy Award-winning filmmaker. He has written and produced numerous documentaries, including the Emmy-nominated PBS NOVA program Mind of a Serial Killer.

John E. Douglas is a former FBI special agent, the Bureau’s criminal profiling pioneer and one of the creators of the Crime Classification Manual. He is currently a consultant on criminal investigative analysis and the author, with Mark Olshaker, of Journey Into Darkness, The Anatomy of Motive, The Cases That Haunt Us, and Law & Disorder, among others.

Us Weekly Absorbing and surprising.

Patricia Cornwell John Douglas is masterful and unrivaled in scientific and gifted probing of the violent mind.

From Jack the Ripper to Jon Benet Ramsey, The FBI's Legendary Mindhunter Sheds New Light on the Mysteries That Won't Go Away