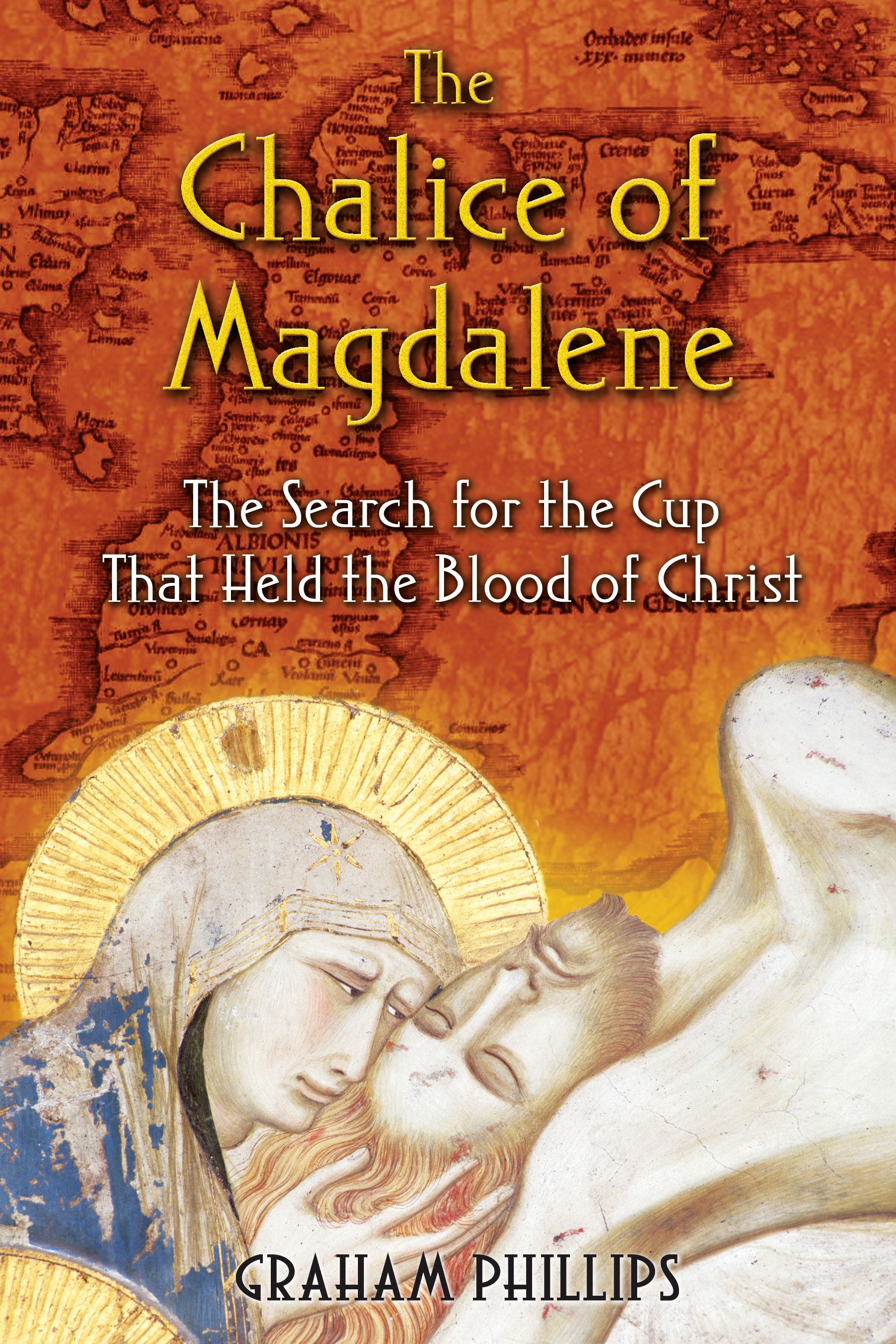 The Chalice of Magdalene

The Search for the Cup That Held the Blood of Christ

• Traces the journey of the Grail from the Holy Land to Rome and eventually to a ruined chapel in Shropshire, England

The popular Arthurian stories of the Middle Ages depict the Holy Grail as Christ’s cup from the Last Supper, which was believed to have been endowed with miraculous healing powers and the ability to give eternal life to whoever drank from it. A much earlier tradition, however, claimed the Grail was the vessel used by Mary Magdalene to collect Christ’s blood when he appeared to her after rising from the tomb. While many vessels were claimed to have been the true Grail, there was only one thought to have been the chalice used by Mary. From Jesus’ empty tomb, where it remained for almost 400 years, this holy relic known as the Marian Chalice was taken to Rome by the mother of the first Christian emperor, Constantine the Great. It was then smuggled from Rome in 410 A.D., according to the fifth-century historian Olympiodorus, to save it from the barbarians who sacked the city. Well into the Middle Ages legend persisted that it had been taken to safety in Britain, the last outpost of Roman civilization in Western Europe.

This journey to England, and what happened to the Chalice there, is the focus of this book. Graham Phillips’s research uncovers the secret legacy of an ancient noble family over generations and a trail of clues hidden in the English countryside that lead to a mysterious grotto, a forgotten attic, and the lost chalice. In tracing the relic, Phillips offers the inside story behind an astonishing adventure that results in the identification of the historical King Arthur and the location of one of the most powerful symbols in Western tradition.

Having gained an historical perspective on the Dark Ages, and the time and place in which Arthur seems to have lived, we turn now to the Middle Ages and the birth of the medieval Arthurian Grail romances. We have discovered how Geoffrey of Monmouth and the romancers of the eleventh and twelfth centuries re-created Arthur’s life from half-remembered historical events; were the contemporary Grail romances similarly compiled?

The original Grail romances consisted of eight stories written within a period of about thirty years between 1190 and 1220. Although the Grail quest featured in many subsequent Arthurian romances, culminating in the most famous version by Thomas Malory in the late fifteenth century, any investigation into the birth of the legend must begin with these earliest versions. The first, Chretien’s Le Conte del Graal, written around 1190, was followed within ten years by two so-called Continuations of his unfinished story, by anonymous authors. Robert de Boron’s Joseph d’Arimathie then appeared around 1200, as did an anonymous French romance known as the Didcot Perceval. The German Parzival, by the epic poet Wolfram von Eschenbach, was composed by 1205. A revised version of the Didcot Perceval, called Perlesvaus, and two Grail stories in the Vulgate Cycle were the last versions in the series to appear, around 1220.

We now come to the story that made the Grail famous: the most popular of all the medieval Grail romances, Robert de Boron’s Joseph d’Arimathie.

Boron is a village near Montbeliard on the Swiss border, where the author wrote under the patronage of a crusader knight, Gautier de Montbeliard. As Gautier departed for Italy in 1199, and died in a subsequent crusade without returning home, Robert’s poem was probably written around the same time (he records in his dedication Gautier leaving home). Unlike the authors of the two Continuations, Robert claimed to have a completely separate source from Chretien for his Grail story. He claimed it came from the book in which important Christian clerics had “written the histories and the great secrets which one calls the Grail.”

For the first time we are given specific details about the appearance and origin of the relic, which Robert called “The Holy Grail.” According to the author, after the Crucifixion, Joseph, who had been a secret follower of Jesus, teams up with another convert, Nicodemus, a Roman officer present at Jesus’s death. Together they approach Pilate to request Jesus’s body for proper burial. Eventually they succeed, also obtaining the cup that had been used at the Last Supper--the Holy Grail.

Accompanied by Nicodemus, Joseph uses the vessel to collect a few drops of blood from Jesus’s body before laying him in the tomb. When, on the third day after the Crucifixion, the Jews discover the body missing, they accuse Joseph of removing it, throw him into prison, and confiscate the sacred chalice. There the resurrected Jesus appears to Joseph in a blaze of light, returns to him the Grail, and tells him he has custodianship of the holy relic. Christ also instructs Joseph in the saying of mass, and informs him that the vessel is to be called the “calice.” Strangely, however, Robert thereafter refers to it as the Grail.

Joseph is eventually rescued after the sacking of Jerusalem by the Romans in A.D. 70, and escapes to Britain with his brother-in-law Bron. Bron has a son, Alein, whose own son is Perceval. Each of these men in turn is called the Rich Fisher, the secret title for the one who possesses and protects the Grail. Robert not only provides a complete history of the Grail and fully describes what it is, he even tells us what the word means: it comes, he claims, from the old French word agree, meaning to delight or satiate, indicating that the cup provides spiritual refreshment.

Confusion, however, arises over the time-scale. If Perceval is the grandson of Bron, Joseph’s contemporary in first-century Palestine, how is he alive in the Arthurian era of the fifth century, the period in which Robert places Perceval? The answer is left to the next romancer, the anonymous author of the Didcot Perceval, who makes Bron immortal. By the time of Perceval, Bron is centuries old due to the Grail’s powers of rejuvenation.

The prose romance Perceval, or the Didcot Perceval as it is now known, was written some time around 1200. It has survived into modern times in two separate manuscripts, the older found in the Didcot Manuscript in the French National Library in Paris. (The word Didcot has nothing to do with the original author, but is the name of a former owner of the manuscript, Firmin Didcot.)

In the manuscript the Didcot Perceval is preceded by a prose version of Joseph d’Arimathie; it was therefore once thought to have been a prose copy of a lost poem by Robert de Boron. However, on further examination of its style, it now seems that the Didcot Perceval is derived from another literary source entirely. Indeed, in the introduction the author claims to have discovered a more authentic source than his predecessors, including even Chretien de Troyes, the originator of the Grail romances:

But of this Chretien de Troyes does not speak, nor the others who have composed of it in order to make their rhymes pleasant, but we tell only so much as appears in the story and as Merlin had written by Blayse his master . . . And he saw and knew the adventures that happened to Perceval each day, and had them written by Blayse in order that they may be spoken of to worthy men who would wish to hear them. Now know what we find in the writings that Blayse relates to us, just as Merlin made him write down and record it.
Graham Phillips

Graham Phillips is the author of The End of Eden, The Templars and the Ark of the Covenant, Atlantis and the Ten Plagues of Egypt, The Chalice of Magdalene, and The Moses Legacy. He lives in the Midlands of England.

“The Quest for the Grail is ended.”

“Graham Phillips has now turned his investigative talents to the search for the Holy Grail. . . . for anyone fascinated by the intertwining of history and myth.”

"For those who love a good historical puzzle or mystery, this book provides thought-provoking reading."

"This work is extremely comprehensive and offers superb research into a wide range of fields ranging from Arthurian legend to Gnosticism, the Gospel of Thomas and Robin Hood!. . . will certainly provide light on the various continuum of history that makes up the Grail heritage. . . a great read and packed with fascinating discoveries."

The Chalice of Magdalene

The Search for the Cup That Held the Blood of Christ