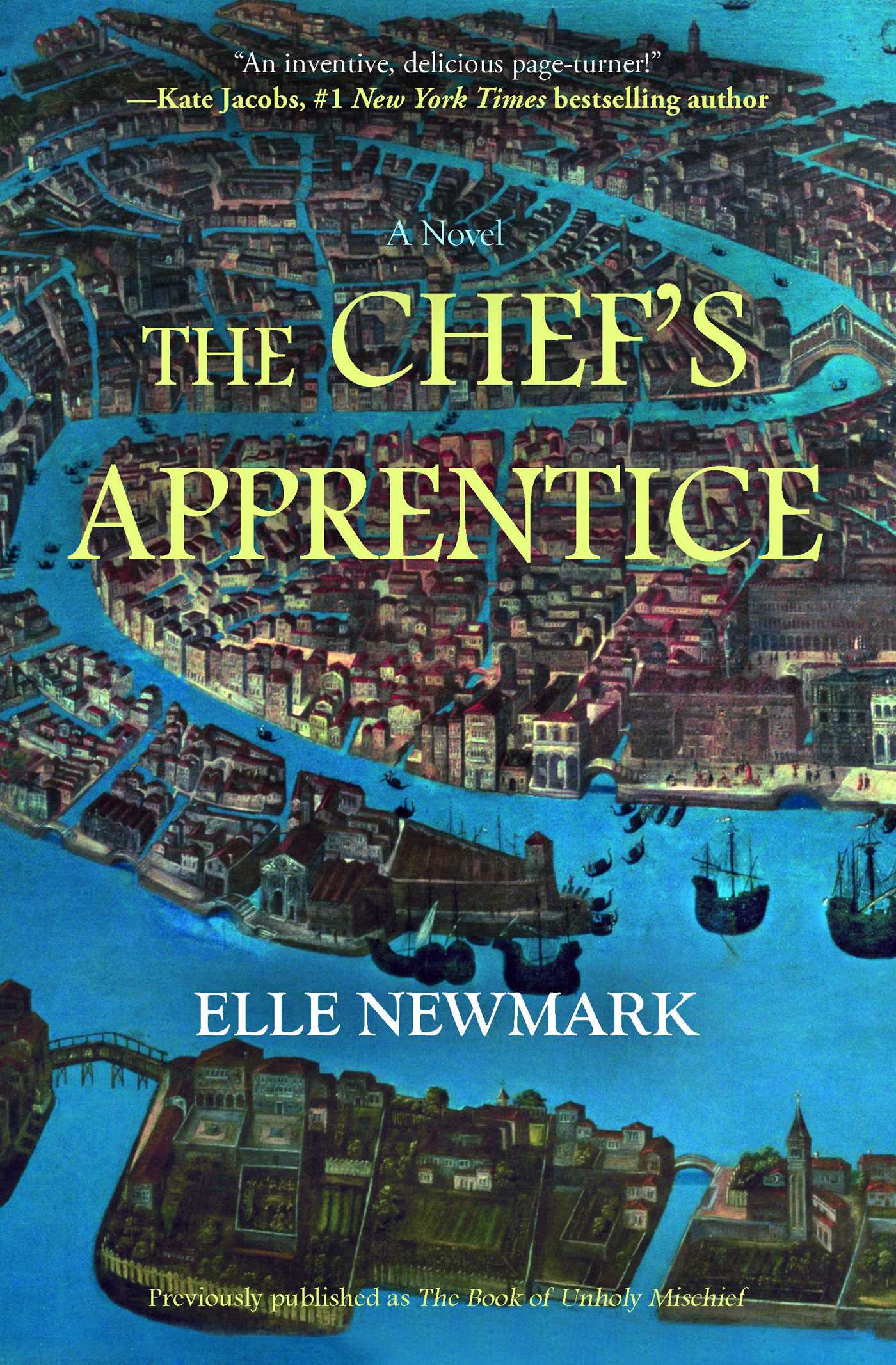 By Elle Newmark
LIST PRICE $19.99
PRICE MAY VARY BY RETAILER

In a world of violence and intrigue, who guards the truth?

It is 1498, the dawn of the Renaissance, and Venice teems with rumors of an ancient book that holds the secret to unimaginable power. It is an alchemist's dream, with recipes for gold, immortality, and undying love. Everyone, rich and poor alike, speculates about the long-buried secrets scrawled in its pages and where it could possibly be hidden within the labyrinthine city. But while those who seek the book will stop at nothing to get it, those who know will die to protect it.

As a storm of intrigue and desire circles the republic that grew from the sea, Luciano, a penniless orphan with a quick wit and an even faster hand, is plucked up by an illustrious chef and hired, for reasons he cannot yet begin to understand, as an apprentice in the palace kitchen. There, in the lavish home of the most powerful man in Venice, he is initiated into the chef's rich and aromatic world, with all its seductive ingredients and secrets.

Luciano's loyalty to his street friends and the passion he holds for a convent girl named Francesca remain, but it is not long before he, too, is caught up in the madness. After he witnesses a shocking murder in the Palace dining room, he realizes that nothing is as it seems and that no one, not even those he's come to rely on most, can be trusted. Armed with a precocious mind and an insatiable curiosity,

Luciano embarks on a perilous journey to uncover the truth. What he discovers will swing open the shutters of his mind, inflame his deepest desires, and leave an indelible mark on his soul.

Rich with the luxurious colors and textures of Venice, The Book of Unholy Mischief delights the senses and breathes fresh life into an age defined by intellectual revival and artistic vibrancy. A luminous and seductive novel, it is, at its heart, a high-spirited tribute to the fruits of knowledge and the extraordinary power of those who hold its key. In a world of violence an d in trigue, who guards the truth?

By clicking 'Sign me up' I acknowledge that I have read and agree to the privacy policy and terms of use. Free ebook offer available to NEW CA subscribers only. Offer redeemable at Simon & Schuster's ebook fulfillment partner. Must redeem within 90 days. See full terms and conditions and this month's choices.
This reading group guide for The Book of Unholy Mischief by Elle Newmark includes an introduction, discussion questions, and ideas for enhancing your book club. The suggested questions are intended to help your reading group find new and interesting angles and topics for your discussion. We hope that these ideas will enrich your conversation and increase your enjoyment of the book.

“The art of cooking, like the art of living, must be savored for its own sake.”

In late fifteenth century Venice, a twist of fate takes orphaned Luciano from a life on the streets to the doge’s lavish palace. The young urchin catches the eye of the doge’s chef, both for the unusual birthmark on his face and for his daring act of stealing an exotic item, a pomegranate, from a street vendor. Luciano becomes Chef Ferrero’s apprentice and is introduced to a decadent world of culinary arts and palace intrigue.

The Book of Unholy Mischief unfolds against the backdrop of a city both beautiful and sinister, where every whisper is a secret or a lie. Soon everyone in the seaside republic, from paupers to the ruthless members of the ruling Council of Ten, is whispering about the existence of an ancient book of unimaginable power—said to be an alchemist’s dream with recipes for gold, immortality, and undying love. Headstrong and curious, Luciano soon becomes caught up in the quest for the elusive book, one that will change the course of his life and the lives of those closest to him.

In The Book of Unholy Mischief, Elle Newmark takes readers on a richly atmospheric trip back in time to the dawn of the Renaissance and presents a captivating tale that blends history, intrigue, and the magic of cooking into a delectably satisfying read.

1. Of the many orphaned boys in Venice who Chef Ferrero could have selected to be his protégé, why does he choose Luciano? Why does he ultimately trust Luciano with the important secret of the Guardians?

2. Luciano accepts his new position in the doge’s kitchen because it gives him a life off the streets. Does he come to appreciate it as more than a means of food and shelter? How is Luciano’s upbringing on the streets of Venice both an asset and a liability to him in his new life as an apprentice?

3. Were you surprised that such a deep affection developed between Luciano and the chef in such a short period of time? Why or why not? In the several months they spend together, what lessons does Luciano learn from the chef, both about cooking and about life?

4. “The chef became my maestro,” says Luciano, “but Marco was my first teacher” (19). In what ways was Marco’s tutelage as important to Luciano as Chef Ferrero’s would later be? How is Luciano influenced by Marco during his quest for the book? When does his allegiance truly shift from Marco to the chef?

5. How does Chef Ferrero “manipulate men’s hearts and minds” (106) through his cuisine? How does his reputation as a culinary magician lead in part to his downfall?

6. Why does Luciano risk his position in the doge’s kitchen to open the chef’s locked cabinet? What does the locked cabinet represent to him? How does his opening of this “Pandora’s box” ultimately impact his future as well as the chef’s?

7. Why is Luciano so intent on perfecting his cheesecake recipe, “a deceptive dish that looked more innocent than it was” (216)? What is he hoping it will prove to the chef?

8. Why does the rumored existence of a powerful and mysterious book create such frenzy in Venice? Discuss the different characters’ motivations for wanting to possess the book, from Luciano’s desire for a love potion to the political purposes of Landucci and the Pope.

9. What prompts Luciano to visit Chef Meunier when he finally returns to Venice? What does he learn about Chef Ferrero during this conversation? What similarities are there in Luciano and Chef Ferrero’s backgrounds?

10. The novel is structured so that Luciano is telling his story years after he fled Venice. What perspective does this give him on the events that took place? How does it enhance the narrative? Did you find it plausible that history’s greatest secrets might actually have been encoded into cookbooks for safe keeping? Why or why not?

11. Discuss how superstitions play out in the novel, particularly in relation to food. Why are some foods, such as tomatoes, considered harmful? Why are the servants afraid to enter the chef’s garden?

12. Chef Ferrero deliberately prevents Marco from escaping from the burning cellar with Luciano. Are his actions justified? Why or why not?

14. Discuss Luciano’s infatuation with Francesca. During his last meeting with the beautiful nun, when he and the chef are on the run for their lives, Luciano contemplates stealing the book for her. What holds him back and solidifies his loyalty to the chef? What makes him finally realize that Francesca is not the person he has perceived her to be?

15. After escaping from the cellar, Luciano takes refuge under a boat and despairs when he sees the chef and Marco being taken away by the Cappe Nere. What does he come to understand about himself in the hours he spends hiding there? Why does refer to it as his “moment of resurrection” (351)?

16. What was your overall impression of The Book of Unholy Mischief? What did you enjoy most about the story—the setting, the characters, the historical details, or something else?

1. Learn more about Venice at www.aboutvenice.org, and view pictures of the doge’s palace at www.greatbuildings.com/buildings/Doges_Palace.html.

2. Prepare an Italian-inspired feast, and then dish up cheesecake for dessert in honor of Luciano’s clandestine creation.

3. Get into the spirit of Chef Ferrero and Luciano’s world by taking a one-day or evening cooking class as a group. Search for cooking schools in your area at www.localcookingclass.com. 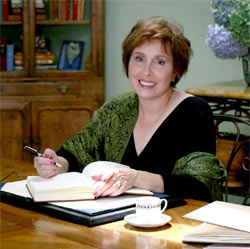 Elle Newmark is the acclaimed author of The Book of Unholy Mischief.  She lived and worked in the hills north of San Diego.

By Elle Newmark
LIST PRICE $19.99
PRICE MAY VARY BY RETAILER