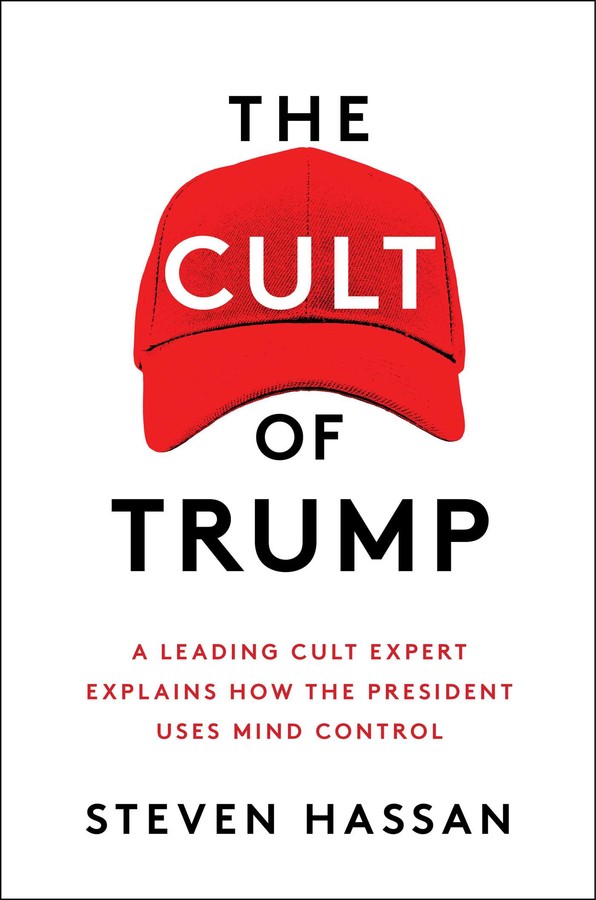 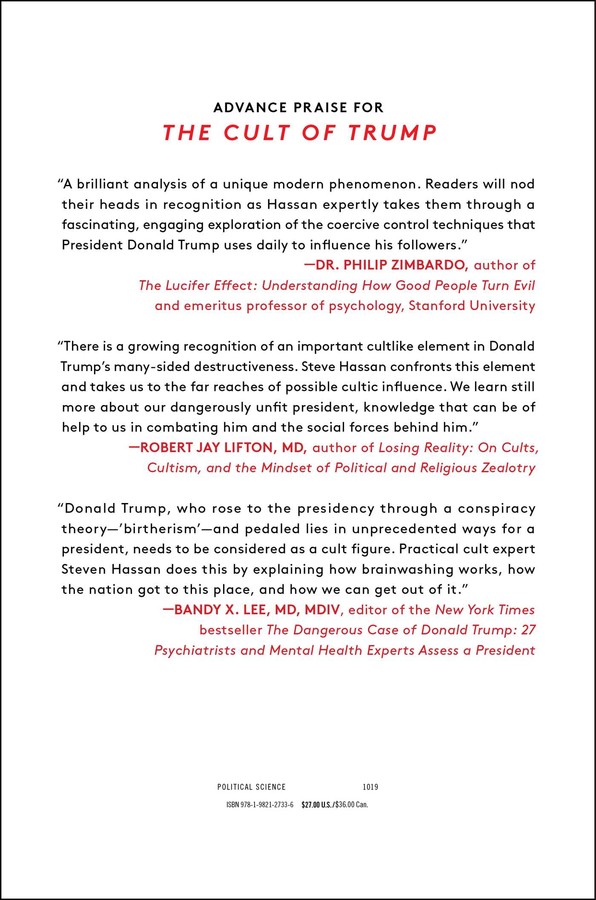 The Cult of Trump

One of America’s leading experts in cults and mind-control provides an eye-opening analysis of Trump and the indoctrination tactics he uses to build a fanatical devotion in his supporters.

Over the past two years, Trump’s behavior has become both more disturbing and yet increasingly familiar. He relies on phrases like, “fake news,” “build the wall,” and continues to spread the divisive mentality of us-vs.-them. He lies constantly, has no conscience, never admits when he is wrong, and projects all of his shortcomings on to others. He has become more authoritarian, more outrageous, and yet many of his followers remain blindly devoted. Scott Adams, the creator of Dilbert and a major Trump supporter, calls him one of the most persuasive people living. His need to squash alternate information and his insistence of constant ego stroking are all characteristics of other famous leaders—cult leaders.

In The Cult of Trump, mind-control and licensed mental health expert Steven Hassan draws parallels between our current president and people like Jim Jones, David Koresh, Ron Hubbard and Sun Myung Moon, arguing that this presidency is in many ways like a destructive cult. He specifically details the ways in which people are influenced through an array of social psychology methods and how they become fiercely loyal and obedient. Hassan was a former “Moonie” himself, and he draws on his forty years of personal and professional experience studying hypnosis and destructive cults, working as a deprogrammer, and a strategic communications interventionist. He emphasizes why it’s crucial that we recognize ways to identify and protect ourselves and our loved ones.

The Cult of Trump is an accessible and in-depth analysis of the president, showing that under the right circumstances, even sane, rational, well-adjusted people can be persuaded to believe the most outrageous ideas. Hassan’s book is essential reading for anyone wanting to understand the Trump phenomenon and looking for a way forward. 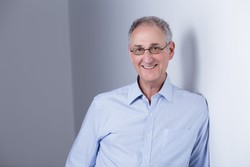 Steven Hassan is a mental health professional who specializes in helping people to recover from mind control as well as helping loved ones to exit without coercion. He has been helping people leave destructive relationships and organizations since 1976 after he was rescued from the infamous cult, the Moonies. Hassan directs the Freedom of Mind Resource Center, a counseling and publishing organization outside of Boston, teaches at Harvard Medical School and Brigham and Women’s Hospital, and is pursuing a doctorate from Fielding University. He is the author of Combating Cult Mind Control and Releasing the Bonds and Freedom of Mind: Helping Loved Ones Leave Controlling People, Cults, and Beliefs.

“[Hassan] is an authority on breaking away from cults…an argument that…bears consideration as the next election cycle heats up.”—Kirkus Reviews

“A brilliant analysis of a unique modern phenomenon. Readers will nod their head in recognition as Hassan expertly takes them through a fascinating, engaging exploration of the coercive control techniques that President Donald Trump uses daily to influence his followers.” –Dr. Philip Zimbardo, author of The Lucifer Effect and emeritus professor of psychology, Stanford University

“There is a growing recognition of an important cult-like element in Donald Trump’s many-sided destructiveness. Steve Hassan confronts this element and takes us to the far reaches of possible cultic influence. We learn still more about our dangerously unfit President, knowledge that can be of help to us in combating him and the social forces behind him.” –Robert Jay Lifton, author of Losing Reality: On Cults, Cultism, and the Mindset of Political and Religious Zealotry

“Donald Trump, who rose to the presidency through a conspiracy theory—“birtherism”—and pedaled lies in unprecedented ways for a president, needs to be considered as a cult figure.  Practical cult expert Steven Hassan does this by explaining how brainwashing works, how the nation got to this place, and how we can get out of it. His book should become part of the compendium of essential reading on the Trump phenomenon.”  —Bandy X. Lee, MD, MDiv, editor of the New York Times bestseller The Dangerous Case of Donald Trump

“Hassan has been studying cult mind control for decades and his work is illuminating. This book explains how mind control stops people from thinking critically, thinking beyond what they are told.” –Professor Yaneer Bar-Yam, president of the New England Complex Systems Institute

"This book is a fascinating tour through the ways people are recruited and retained by cults, the characteristics of cult leadership and the dimensions of undue influence. Point by point, Hassan shows how Trump and his followers meet each of the criteria that define a cult and how Trump's childhood and rise to the presidency shaped his imperious, narcissistic style and why his followers, both in the voting public and the congress, cannot make a rational evaluation of his words and actions. This book is a must for anyone who wants to understand the current political climate." –Judith Stevens-Long, Ph.D and author of Living Well, Dying Well

“Drawing on both his experiences as cult expert and ex-cult member, Hassan opens a wide-ranging, thoughtful and well-researched analysis of some of the most puzzling aspects of the current presidency, including the remarkable passivity of fellow Republicans, the gross pandering of many members of the press, the curious avoidance of clear labels that could and should be applied  by the media. Quibbles and speculations about diagnosis do not play central roles. Instead, the current administration is best understood through cult analogies, including factors such as total authoritarianism and intolerance of any questioning or deviation from the “playbook.” This is both a clarifying and a terrifying book. Highly recommended.” –Thomas G. Gutheil, MD and professor of psychiatry, Harvard Medical School.

“The Cult of Trump, in step-by-step detail, examines the inner-workings of our current Presidential administration.  Hassan masterfully parallels the psychological manipulation employed by cults over its members with the current administration’s distortion of reality by its twisting narratives and use of systematic techniques to influence our view of the country. The picture is much darker than mere buffoonery.” –Robin Boyle Laisure, J.D., advisory council member of International Cultic Studies Association,  and author of “Employing Trafficking Laws to Capture Elusive Leaders of Destructive Cults”

The Cult of Trump