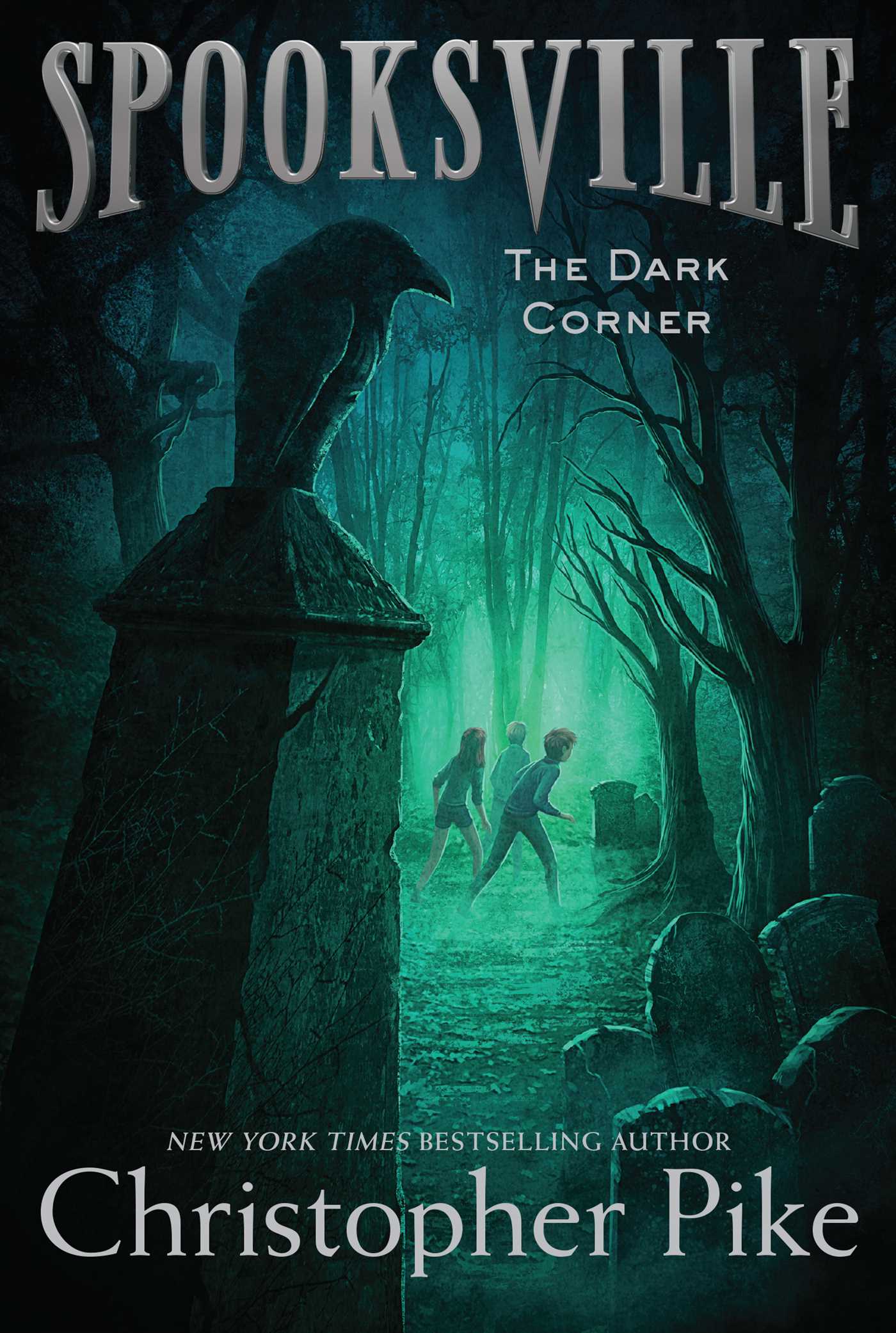 At Sally’s insistence, the gang sets out to find the cool and sophisticated Bryce Poole. He went off to investigate the Secret Path a week ago and hasn’t been seen since. When they find his backpack abandoned next to Madeline Templeton’s tombstone, they know he’s gone to a different realm. Sally, Adam, and Watch travel through the tombstone’s portal and find themselves in a better version of Spooksville: it has all the same buildings, except everything is brighter and more beautiful. Even the cheeseburgers taste better. But something dark lurks beneath this sunny Spooksville...

The Dark Corner 1
It was Sally Wilcox who brought up how cool Bryce Poole was and started the argument that led to their taking another trip through the Secret Path. Of course she later swore she had nothing to do with what happened. It was typical. No one, especially Sally, ever wanted to be blamed for starting an adventure, at least not in the middle of the adventure—when it looked like they would all die.

The day started as so many did that summer in Springville, known as Spooksville to all the town kids. Adam Freeman, Cindy Makey, Sally Wilcox, and Watch were together for a breakfast of milk and doughnuts. While stuffing their faces at the local coffee shop, they tried to figure out what to do with the day.

“Only a few weeks and we’ll be back in school,” Sally said, brushing her brown bangs out of her eyes. “We have to make the most of every day.”

“I’m kind of looking forward to starting school here,” Cindy, who was new to town, said. “I like learning things.”

“Summer vacation in Spooksville is more of a learning experience than anything we do in school,” Sally muttered.

“What is school like here?” Adam, who was also new to town, asked. “Is it as weird as the rest of the town?”

“Except for a few of the teachers,” Sally added. “The ones that aren’t human.”

“How did I know you were going to say that?” Cindy asked.

“There are a couple of unusual teachers in the middle school,” Watch admitted.

Sally nodded. “There’s Mr. Castro. He teaches history, basically. But sometimes he talks about the future.”

“Don’t say it,” Cindy interrupted, flipping her long blond hair over a shoulder. “Mr. Castro’s really from the future.”

“Well, he’s not from around here,” Watch said.

“I think he was built at the North Pole,” Sally said. “If my sources are accurate.”

“I heard it was the South Pole,” Watch said.

Watch spoke reluctantly. “He does seem to have several machinelike qualities. For example, he never eats lunch. He never drinks water. When he’s tired, he lays out on the football field and soaks up the sun’s rays. I guess that’s how he recharges his batteries.”

“He also has a hearing aid that looks more like a cosmic receiver,” Sally said. “He never takes it off. I hear it’s wired directly into his positronic brain.” She added, “He sure doesn’t have trouble hearing.”

Cindy shook her head. “I don’t believe any of this.”

“Wait till you get him for history,” Sally said. “And he pops his eyes out in the middle of a lecture just to clean his contact lenses.”

“You said a couple of teachers were weird,” Adam said. “Who’s the other one?”

“She has scaly skin?” Cindy asked.

“Yes,” Sally said impatiently. “I told you, she’s a snake. When have you ever seen a snake that didn’t have scaly skin?”

“What Sally means is Mrs. Fry seems to be part snake,” Watch said. “She slides around the room and hisses all the time. Some people think she’s a descendant of a reptilian race that lived here millions of years ago.”

“Frogs are dissected all the time in her class,” Sally said. “But never snakes or lizard. And all the frog parts—well, they disappear between classes. She eats them all.”

Cindy made a face. “That’s gross.”

Adam didn’t know what to make of any of this. “It sounds like it’s going to be an interesting school year.”

Sally brightened. “There are some cute guys at school.”

Cindy was cautious. “Are they human?”

Sally waved her hand. “There’s this one guy, his name’s Bryce Poole, and he’s so cool. He’s like a young James Bond. Nothing disturbs him. You’ll adore him, Cindy. He’s got real dark hair, and super warm brown eyes. He’s only twelve but he doesn’t act like a kid. He talks like a well-read, sophisticated adult—like me.”

Cindy was interested. “How come we haven’t seen him this summer?”

“He’s a loner,” Sally said in a confidential tone. “He takes his own risks and he doesn’t go whining to anyone about the consequences.”

“It’s hard to imagine anyone who’s taken more risks than we did this summer,” Adam muttered.

“And I can’t remember that we ever whined to anyone,” Watch added.

Sally stopped and laughed. “Are you guys jealous of Bryce?”

Adam shrugged. “How can I be jealous of someone I’ve never met?”

“What bothers you guys more?” Sally persisted. “Is it his obvious intelligence? His smoldering good looks? Or is it his dynamic attitude?”

“I’m trying to tell you about him,” Sally said. “And you’re getting all upset.” She paused. “I think you’re jealous, but you don’t have to be. I like him as a friend. There’s nothing between us.”

“How can you say that?” Adam, who was a little insecure about his looks and especially about his height, demanded. “You haven’t met him either.”

“But if Cindy does fall in love with him when she meets him,” Sally said, “you mustn’t stand in her way, Adam. You have to be mature about it. So Bryce is better-looking, taller, and smarter than you and Watch. It doesn’t mean you’re not worthy human beings.”

“Where’s a good place to meet him?” Cindy asked.

Sally spoke seriously. “You have to catch him coming or going. He never stays in one place long. He’s always taking some super risk to protect this town from danger.”

“Hold on a second,” Adam said. “Since I’ve been here, what has he done to protect this town? I mean, where was he when we had to deal with aliens, the Haunted Cave, the Cold People, not to mention the witch. Where was he all this time?”

“Yeah,” Watch agreed. “Bryce didn’t even bother to help us out with the Howling Ghost.”

“How can you call the Cold People a small crisis?” Adam demanded. “If we hadn’t stopped them, they would have taken over the whole planet.”

“Yes, but this isn’t that big a planet,” Sally said. “Not compared to the rest of the galaxy. Bryce deals more with cosmic emergencies.”

“I thought you said he protected the town,” Adam interrupted.

“And many other places,” Sally said.

Adam and Watch looked at each other and rolled their eyes. “Like what kind of cosmic emergencies?” Adam tried again. “What is this big shot Bryce doing right now to protect us?”

Sally glanced around the coffee shop to make sure no one was listening. She spoke in a hushed tone. “Bryce is working with the Secret Path. He’s trying to halt the interdimensional flow of negativity so that it doesn’t seep into our reality.”

Adam frowned. “How do you know this?”

Sally sat back and nodded gravely. “I have my sources.”

“I don’t believe it,” Watch said. “Bryce Poole doesn’t even know what the Secret Path is. I asked him about it once and he didn’t even know where it began.”

“He was just acting like he didn’t know,” Sally said. “After I told him about our adventures on the other side of it, he told me he didn’t think you were equipped enough to survive the dangers of the interdimensional portal.”

It was Watch’s turn to frown. “Equipped with what?”

“I don’t want to get personal here,” Sally said.

Sally was offended. “Don’t take it out on me because Cindy is suddenly interested in another guy.”

“Your voice said it all,” Sally corrected. “And I understand what Adam’s going through. I’m sympathetic. To experience raging jealously and bitter rejection for the first time is not easy.”

Adam sighed. “I am so grateful for your sympathy.”

“We’re arguing about nothing,” Watch said. “Bryce isn’t a super hero. He’s probably not ever used the Secret Path.”

“How do you know?” Sally shot back. “You’ve been afraid to use it since that first time.”

“I haven’t been afraid,” Watch said. “I’ve just been busy with other things.”

“Yeah, like saving the planet with me, his best friend,” Adam added.

“I saved the planet, too,” Sally said.

“Then you and Bryce should be perfect together,” Adam said.

Sally laughed. “You are so jealous!”

Adam got angry. “Why should I be jealous of a guy who thinks he’s James Bond? I agree with Watch. This guy has not been on the Secret Path. He doesn’t have the guts.”

“Go where?” Cindy asked. “See what? What is the Secret Path?”

“It winds through town and leads to other dimensions,” Watch explained.

“It starts or ends in the cemetery,” Sally added. “Depending on how you look at it. Why don’t we go there and look for signs of Bryce? Then we can see who the real hero in this town is.”

“Why would Bryce leave signs that he’s been using the Secret Path?” Watch asked.

“You guys have an answer for everything.” Sally snickered and turned for the door. “Are you chickens coming or not?”

The way she worded the question, it was impossible to say no.
Christopher Pike

Christopher Pike is a bestselling author of young adult novels. The Thirst series, The Secret of Ka, and the Remember Me and Alosha trilogies are some of his favorite titles. He is also the author of several adult novels, including Sati and The Season of Passage. Pike currently lives in Santa Barbara, where it is rumored he never leaves his house. But he can be found online at Facebook.com/ChristopherPikeBooks.