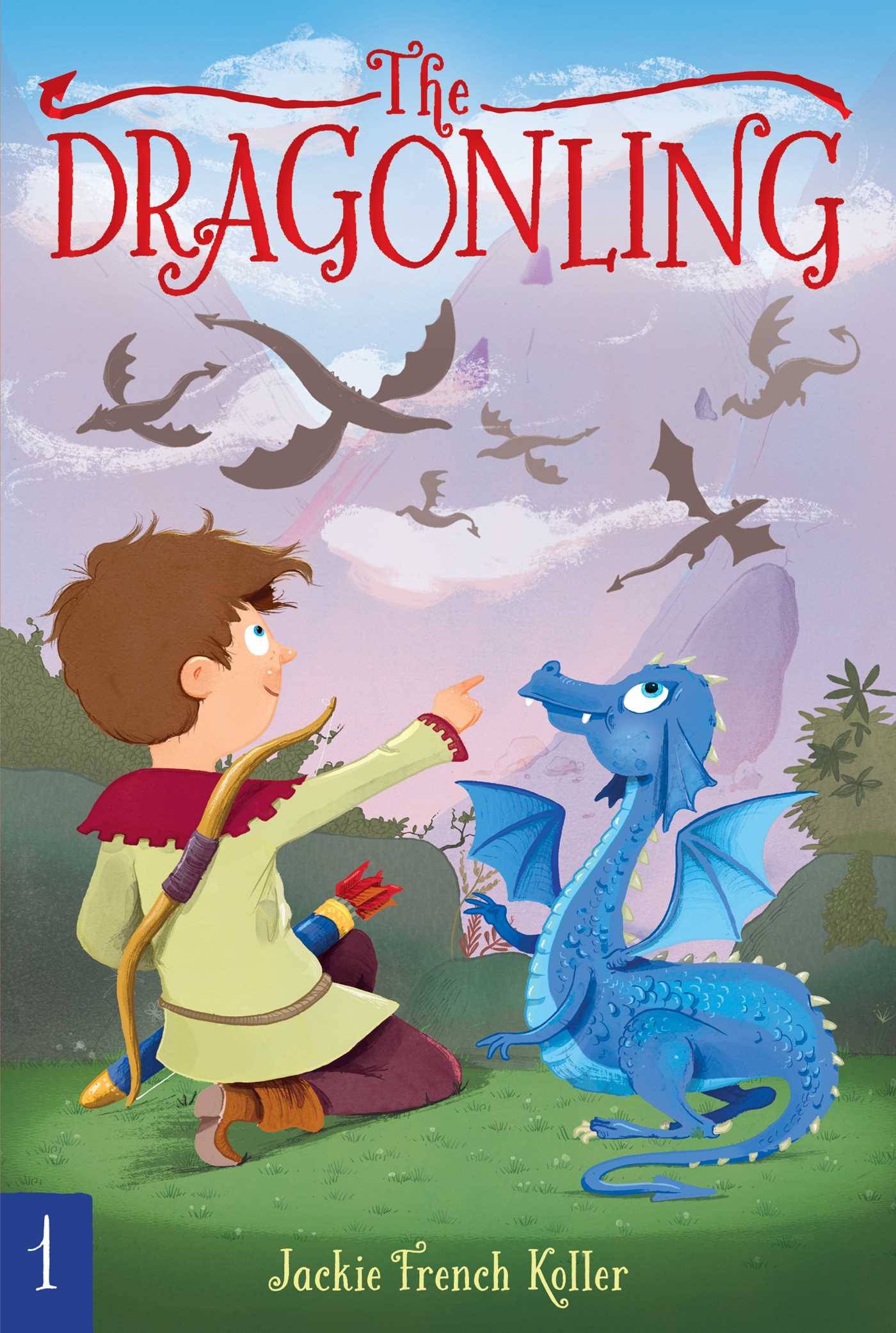 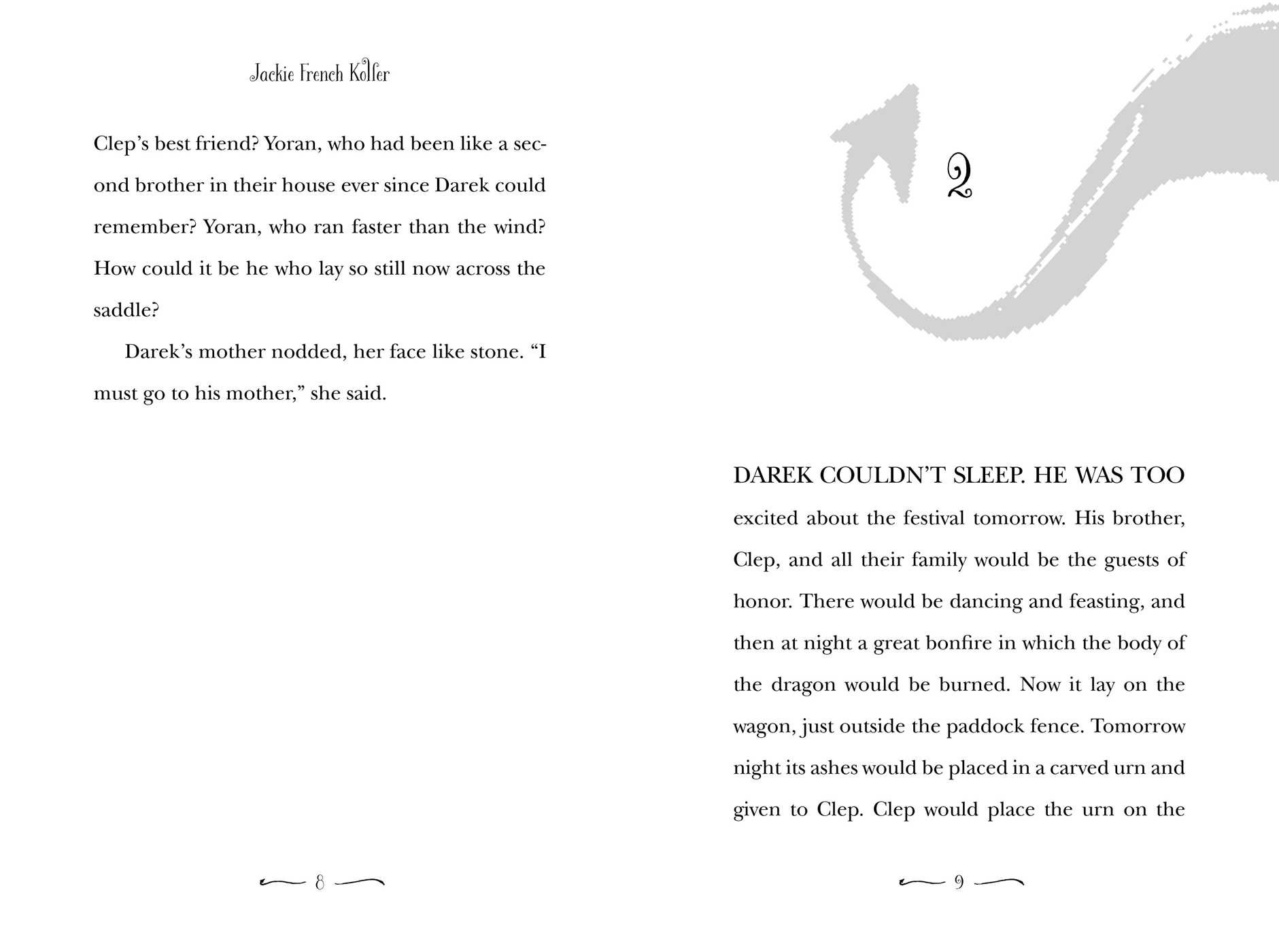 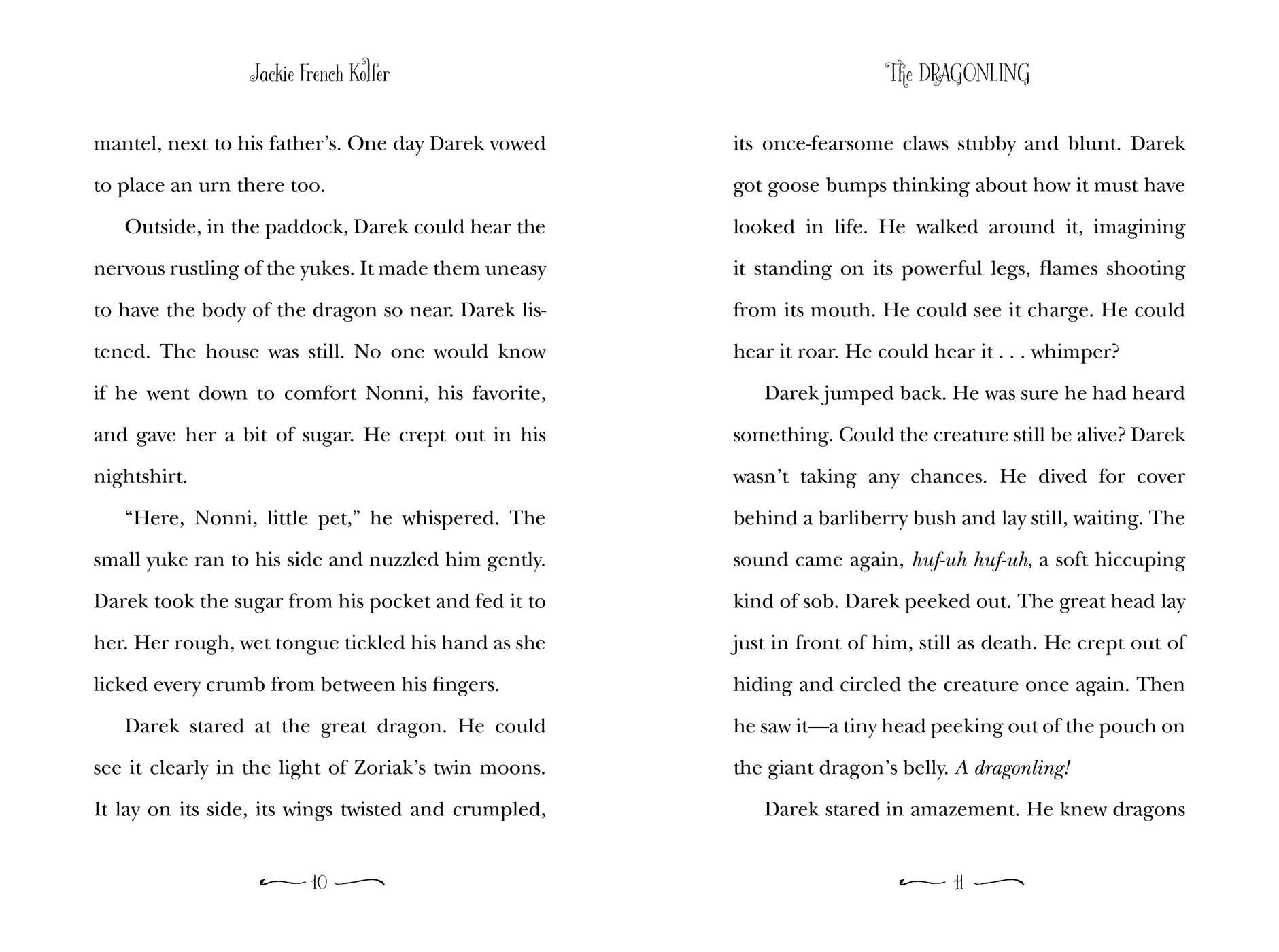 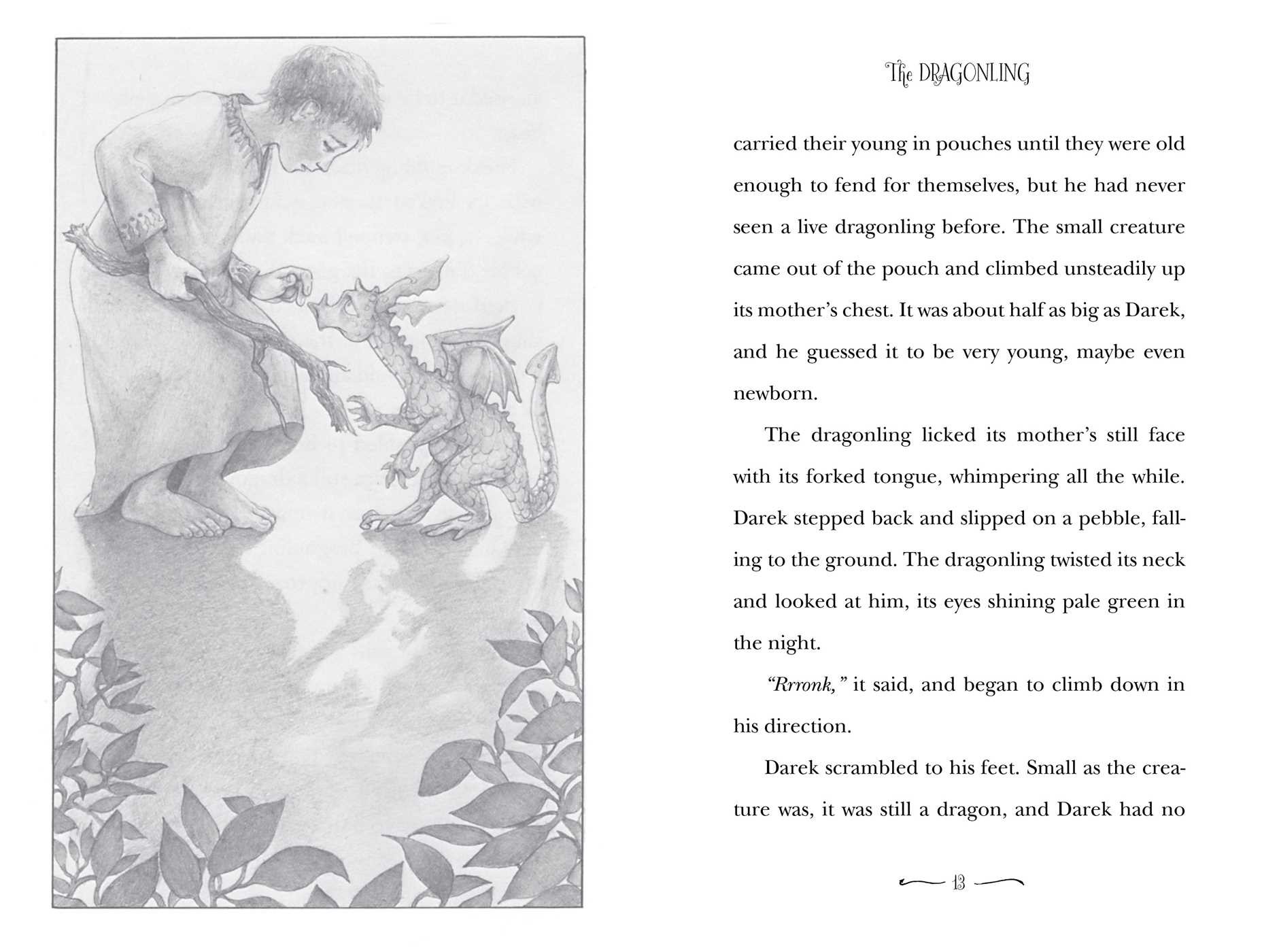 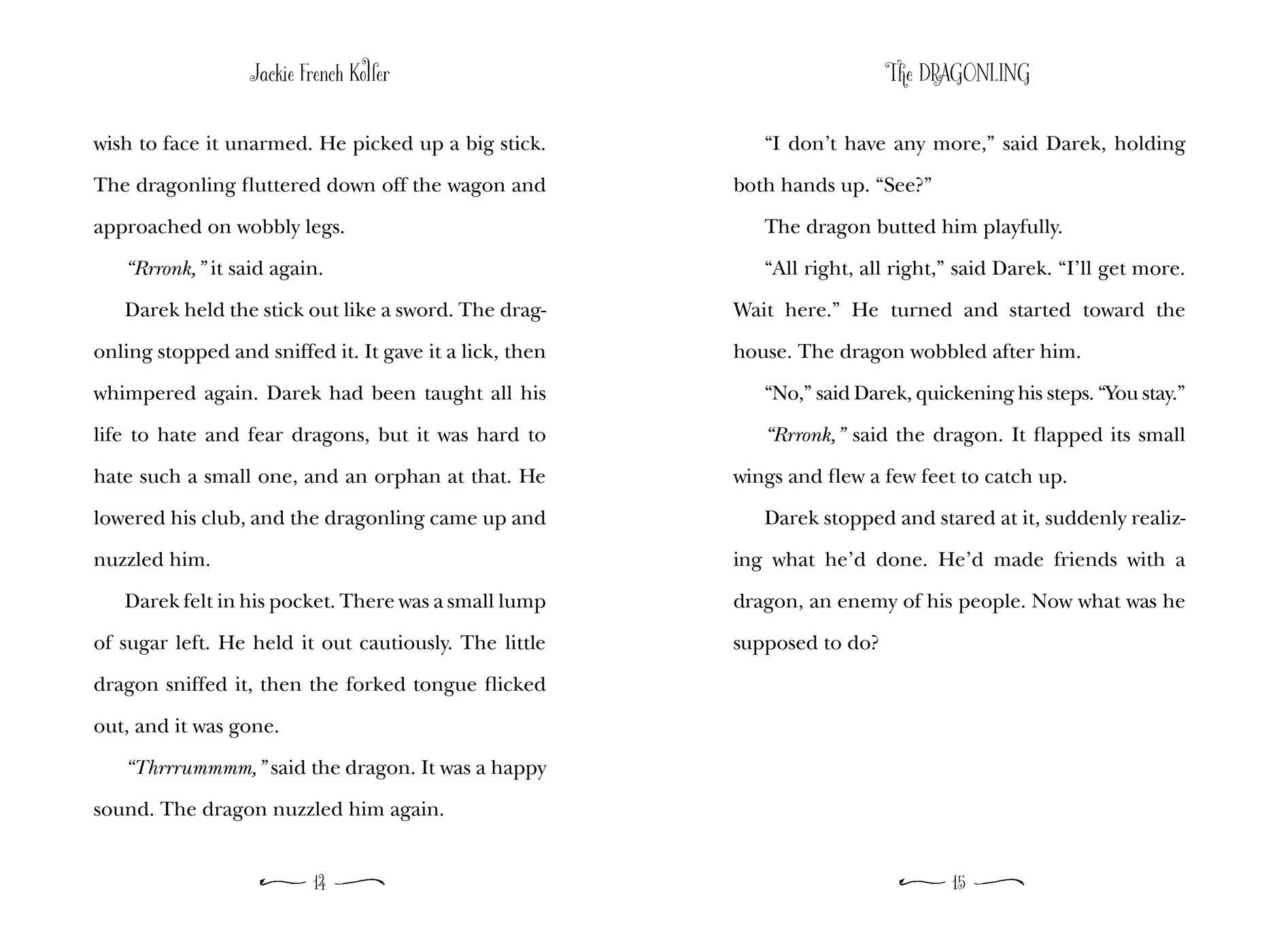 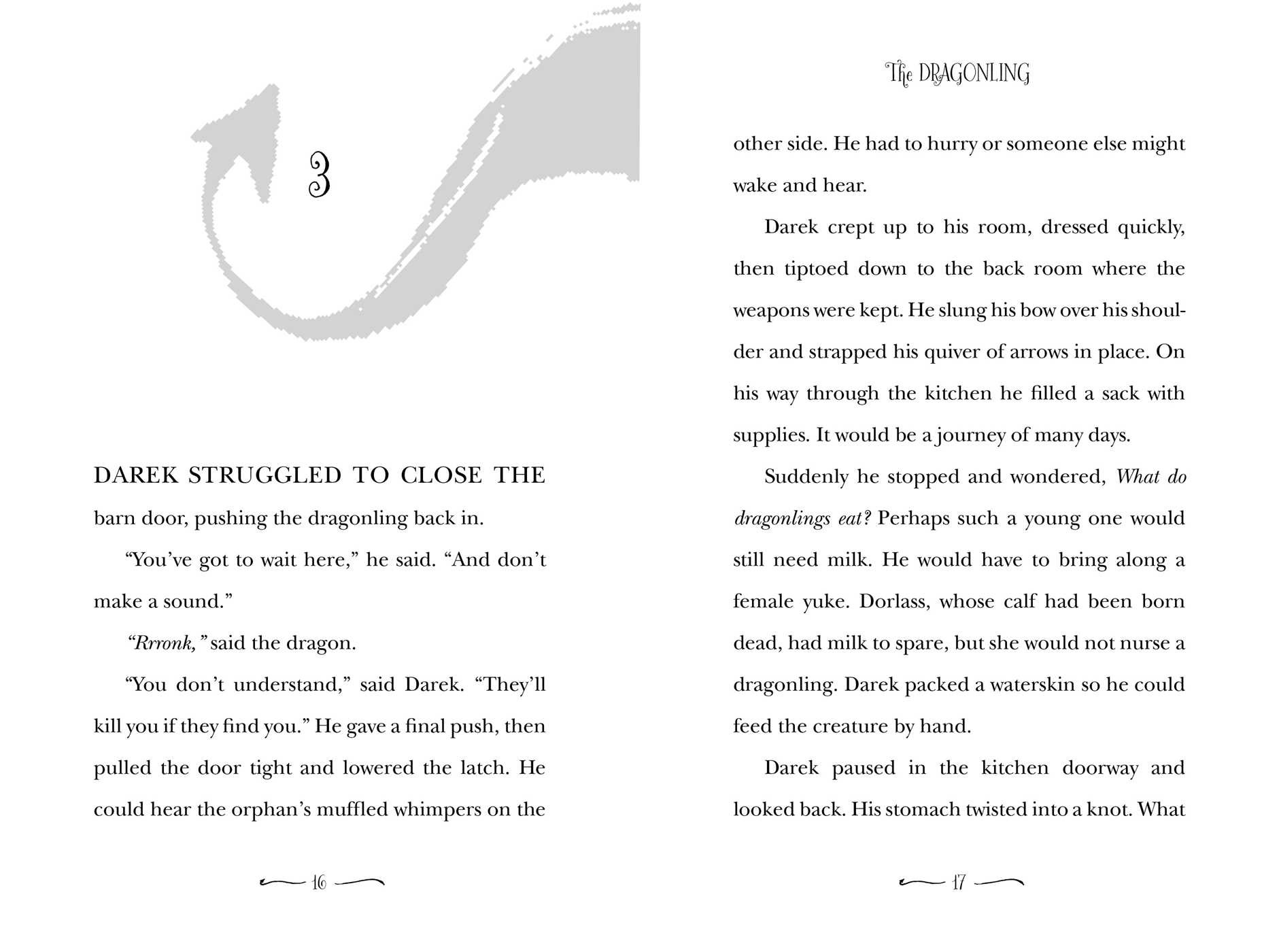 A boy and a baby dragon forge an unlikely friendship in this first book in the fantastical Dragonling chapter book series!

Darek can’t wait for his first Dragonquest. Then he can be just like his older brother, Clep, the hero who brought down a Great Blue, the largest and fiercest dragon of all.

Darek goes to admire the kill—and finds a dragonling peeking out of the giant dragon’s pouch. Scared but curious, he feeds the hungry baby and makes an unlikely friend. But to save the helpless Dragonling he must now venture into the fearsome Valley of the Dragons, risking his life to return his friend to his own fire-breathing kind.

1
DAREK AWOKE AT THE FIRST light of dawn. He sat up quickly and pushed his bed curtains aside. Through his window he could see the soft violet rays of the morning sun just touching the tips of the yellow mountains of Orr. His brother, Clep, was up there somewhere, probably breaking camp, getting ready for the day’s hunt. It wasn’t fair, Darek thought. Why did he have to wait three more years before his first dragonquest? So what if Clep was twelve and he was only nine. He was nearly as tall and strong as Clep. Three more years! It seemed like forever.

“Darek? Darek, are you up?” It was his mother’s voice from the kitchen below.

“I’m coming,” Darek called back. He got dressed and clattered down the stairs.

His mother was bent over the hearth, spooning porridge into his bowl. Darek slid into his place at the table.

“Do you think maybe the men will be home today?” he asked.

His mother’s brow wrinkled with worry as she served him his breakfast.

“Who knows how long they will be gone?” she said. “Ten days? Twenty? A dragonquest ends when it ends.”

“I can’t wait until it’s my turn,” Darek said eagerly. “I will be the one to make the kill. I will win the claws to wear around my neck. I will be the Marksman, like Father.”

Darek’s mother shook her head and turned back to the fire.

“Why are you silent, Mother?” Darek asked. “Why don’t you get excited about the dragonquest like everyone else?”

“My brother was killed on his first dragon-quest,” said Darek’s mother quietly.

“Many have been killed on the dragonquests,” said Darek, “but they are heroes. You should be proud.”

Darek’s mother sighed. “In the old days,” she said, “when the dragons were plentiful, when they threatened the villages and raided the yukeI herds, that was the time for heroes. Now the dragons are few, and they keep to the mountains. Why should we send young boys into their midst?”

“They are not boys,” said Darek. “They are men, and they must face a dragon to prove it.”

“There are other ways to prove you are a man,” said Darek’s mother.

“What are they, then?” asked Darek.

“Doing your work with pride, caring for others, and thinking your own thoughts are good ways,” said Darek’s mother.

“Bah,” said Darek. “Anyone can do those things, but only a man can slay a dragon.”

There was a sudden, loud clanging, and Darek’s mother’s head jerked up.

“The men return,” she said.

Darek and his mother ran to the village square. The hunting party was threading its way down through the mountain pass, pulling a great wagon. Upon it lay a hulking mound.

“A Blue!” shouted Darek. “It’s a Great Blue!” Great Blues were the largest and fiercest of all dragons. Darek could hardly contain his excitement as he raced to meet the party. But as he drew closer, his steps faltered. He could see that his father was leading a yuke, and slung over the yuke’s saddle was a small body, about the size of Clep’s. Darek heard his mother cry out behind him.

Other children jostled Darek as they rushed by. “What’s the matter? Hurry up! Get out of the way!” Darek swallowed hard and tried to ignore the great weight that had settled in his chest. If it was Clep, he must be brave. He must not shed a tear. He must be honored to have a hero for a brother.
Jackie French Koller

Jackie French Koller has been a storyteller since the sixth grade, when she amused her friends by spinning tales on the playground. She has also edited a children’s newspaper, taught writing in public schools, and studied art. Ms. Koller lives in Groton, Massachusetts, with her husband.

More books in this series: The Dragonling