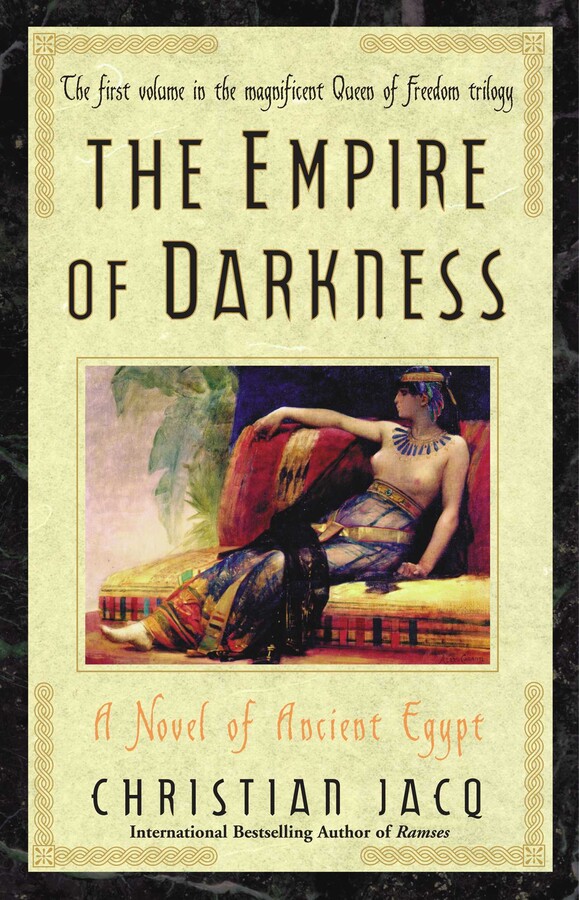 The Empire of Darkness

Book #1 of Queen of Freedom Trilogy
By Christian Jacq
Translated by Sue Dyson
LIST PRICE $1.99
PRICE MAY VARY BY RETAILER

Christian Jacq, author of the international triumphs Ramses and The Stone of Light, brings the people and passions of ancient Egypt to life in an enthralling epic novel in three volumes.
Egypt is a shadow of its former self. An army of barbarians mounted on horse-drawn chariots has swept through the Empire, destroying everything in its path. Known as the Hyksos, these "leaders from foreign lands" have reduced the country of the pharaohs to slavery. Only the city of Thebes resists, protected by the widow of the last pharaoh, Teti the Small. But Teti knows that her reign is limited, that it's only a matter of time before her men succumb to the barbarities of the cruel Hyksos. She has an eighteen-year-old daughter, however: Ahhotep. Fierce, beautiful, and courageous, this girl whom history will call "Egypt's Joan of Arc" will never accept defeat. And so she decides to re-ignite the flame of Egyptian resistance. All by herself.
Combining historical fact with a vivid imagination, Christian Jacq tells the enthralling true story of this Ancient Egyptian warrior-heroine. Without the courage and passion of Queen Ahhotep, the Valley of the Kings and the glorious treasures of the pharaohs, including Ramses the Great, would never have existed.

Ahhotep had not moved for more than half an hour. When she saw the last guard walk past the main gate of the palace, the beautiful brown-haired girl took advantage of the few minutes before the guard was relieved and scurried into a thicket of tamarisks, where she hid until nightfall.

Ahhotep was the eighteen-year-old daughter of Queen Teti the Small, and she bore a strange name, which could be translated as "The Moon is Full," "The Moon Has Been Appeased," or even "War and Peace," for, according to the sages, the moon was a warrior god embodying the mystery of death and resurrection.

War...it was the only way to rid the land of the Hyksos who controlled it all -- with the exception of Thebes, the sacred city of the god Amon. Thanks to his protection, the Temple of Karnak and the town nearby had been spared by the barbarians, but for how much longer?

The Hyksos had flooded in through the Delta forty years before, like a mighty swarm of locusts. Asians, Arabs, Canaanites, Syrians, Scythians, Minoans, Cyprians, Persians, Anatolians, and yet more races, all armed to the teeth. They used strange four-legged creatures called horses, which had large heads and were bigger and faster than donkeys. The horses drew wheeled vehicles which moved incredibly swiftly and had enabled the attackers to massacre Pharaoh's soldiers.

Ahhotep cursed the softness and cowardice of the feeble Theban army. True, it could not hope to measure up to the large, powerful forces of occupation, with their terrifying new weapons, but failure to act would result in annihilation. When Apophis, supreme commander of the Hyksos, eventually decided to raze Thebes to the ground, the Egyptian soldiers would run away, and the population would be massacred -- with the exception of pretty women, who would be used by the brutish soldiers for their pleasure, and sturdy children, who would be sent into slavery. The last free men on Egyptian soil would bow their heads, incapable of doing anything.

What was left of the wondrous realm of the pyramid builders? A province caught between the occupying power in the north and its Nubian allies in the south, a temple built by Senusret I and left abandoned, and a palace that now looked anything but royal.

Without Teti the Small's resolution, even the House of the Queen would have been destroyed, and the Thebans, like all other Egyptians, would have become servants of the Hyksos. But, trapped in her isolation, Teti was beginning to weaken, and the supporters of Theban independence saw their numbers fall every day.

If there were only one rebel left, that person would be Ahhotep. The young girl had no fear of battle, suffering, or death. Even with a dagger at her throat, she still would refuse to submit to the Hyksos yoke.

The courtiers mocked her as mad, regarding her as amusing rather than dangerous. They were wrong. Today was the start of the war for freedom. With an eighteen-year-old rebel as its only soldier and a well-sharpened flint knife as its only weapon.

The guard had been changed, and Thebes was asleep. It was a long time since any banquets had been held or music played in the reception hall, with its faded paintings. And there was no longer a pharaoh to take his seat upon a desperately empty throne.

Ahhotep wanted to forget this heartrending sight, and she ran toward the landing stage. At the quay lay a half-derelict cargo barge, once used to transport blocks of stone from the quarries, which the Hyksos had closed down, and a few small sailing boats.

Among them was one small boat in good condition. This was the means of transport Ahhotep planned to use to leave the Theban enclave. She jumped nimbly down into the boat and seized the oars. She was heading north, and the current would be in her favor.

No one traveled on the river at night, for there were many dangers -- hippopotamus, crocodiles, whirlpools -- but Ahhotep had no choice. "And when we have no choice," she often declared loudly, "we are free."

Determinedly, the princess began to row.

Since no one could tell her precisely where the free area ended and Hyksos-occupied territory began, she would find out for herself. The queen's frightened advisers assumed that the Hyksos had made great progress since Apophis's seizure of power, and Apophis's reputation for cruelty exceeded his predecessors'. They were urging Teti to leave Thebes without delay.

But where could she live in safety?

As far as Ahhotep was concerned, the only refuge was in attack. The first skirmish would take place on the demarcation line, and, if necessary, the princess herself would command the tattered remnants of the Egyptian army.

In the past forty years, thousands of her compatriots had been massacred. The Hyksos believed they could act with complete impunity and continue their reign of terror over the Two Lands of Upper and Lower Egypt. Ahhotep soon would show them that they were very wrong.

Never had an Egyptian princess, accustomed to the luxury of court, been forced to wield heavy oars like this, at the risk of spoiling her hands. But the survival of the country was at stake, and the pretty brunette thought only of the goal she must attain.

The boat bumped hard against something and almost capsized, but by great good luck it righted itself. Ahhotep glimpsed a dark form moving away, its powerful tail thrashing in the water. She had disturbed a crocodile.

Refusing to be afraid, Ahhotep rowed on. Thanks to her excellent eyesight and the light of the full moon, she avoided the wreckage of a boat and a grassy islet where pelicans were sleeping. On the banks, the peasants' houses stood abandoned. Fearing that the invaders were coming, the people had taken refuge in Thebes.

Not far away, she saw smoke.

Ahhotep slowed her pace, steered the boat toward the bank, and hid it in a papyrus thicket, disturbing a cloud of sleeping egrets. Fearing that their cries might give her away, she waited some time before moving. When she eventually climbed up the sloping bank, she found herself in an abandoned field.

Was the smoke coming from a burning farm or from a Hyksos camp? Whichever the case, the enemy was very close.

"Well, well, little girl," barked an aggressive voice. "What are you doing here?"

Without a moment's hesitation, Ahhotep swung around and, brandishing her flint knife in her right hand, hurled herself at the enemy. 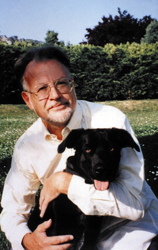 The Empire of Darkness

Book #1 of Queen of Freedom Trilogy
By Christian Jacq
Translated by Sue Dyson
LIST PRICE $1.99
PRICE MAY VARY BY RETAILER

More books in this series: Queen of Freedom Trilogy