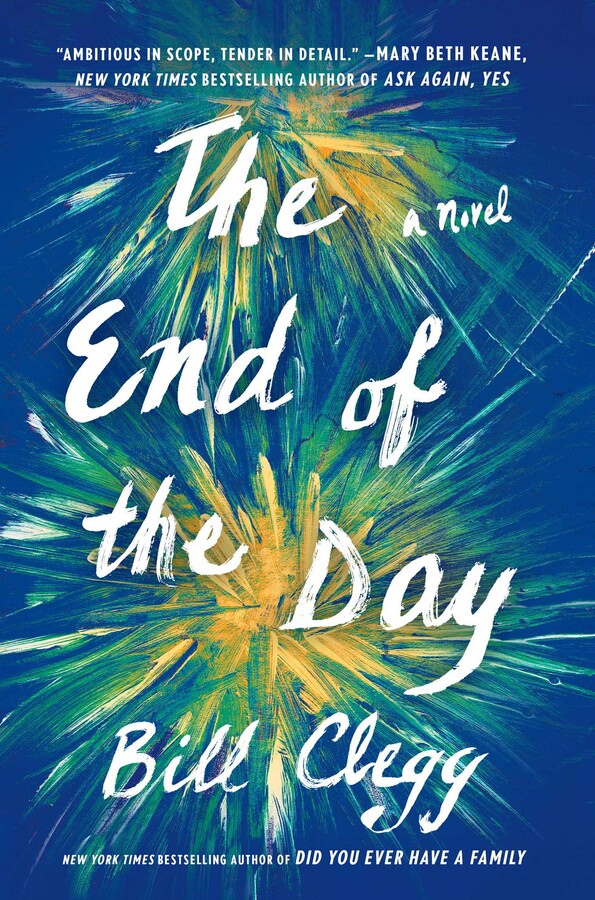 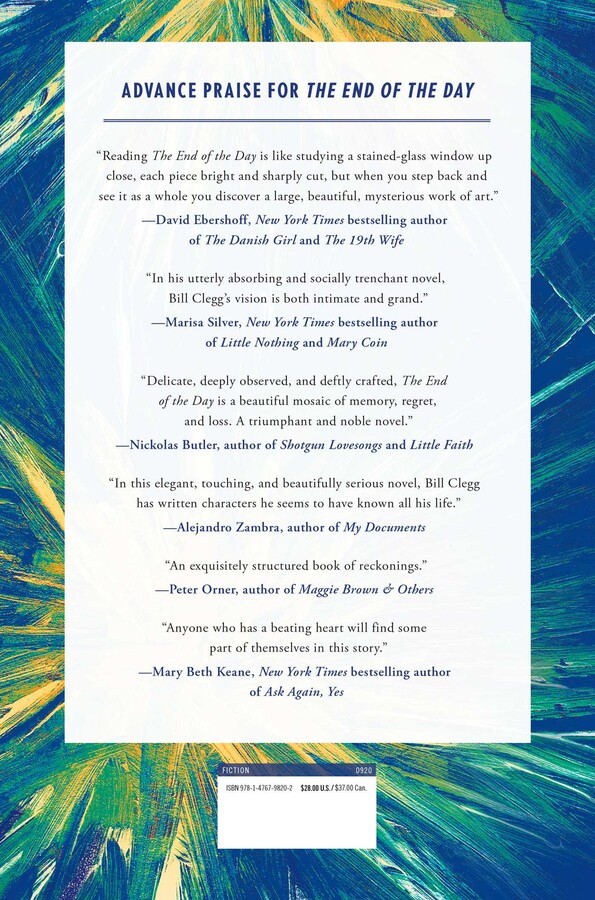 The End of the Day

“Reading [The End of the Day] is like studying a stained-glass window up close, each piece bright and sharply cut, but when you step back and see it as a whole you discover a large, beautiful, mysterious work of art.” —David Ebershoff, New York Times bestselling author of The Danish Girl and The 19th Wife

Following his acclaimed New York Times bestseller, Did You Ever Have a Family, Bill Clegg returns with a deeply moving, emotionally resonant second novel about the complicated bonds and breaking points of friendship, the corrosive forces of secrets, the heartbeat of longing, and the redemption found in forgiveness.

A retired widow in rural Connecticut wakes to an unexpected visit from her childhood best friend whom she hasn’t seen in forty-nine years.

A man arrives at a Pennsylvania hotel to introduce his estranged father to his newborn daughter and finds him collapsed on the floor of the lobby.

A sixty-seven-year-old taxi driver in Kauai receives a phone call from the mainland that jars her back to a traumatic past.

These seemingly disconnected lives come together as half-century-old secrets begin to surface. It is in this moment that Bill Clegg reminds us how choices—to connect, to betray, to protect—become our legacy.

Deeply observed and beautifully written, this novel is a feat of storytelling, capturing sixty years within the framework of one fateful day.

By clicking 'Sign me up' I acknowledge that I have read and agree to the privacy policy and terms of use. Free ebook offer available to NEW CA subscribers only. Offer redeemable at Simon & Schuster's ebook fulfillment partner. Must redeem within 90 days. See full terms and conditions and this month's choices.
This reading group guide for The End of The Day includes an introduction, discussion questions, and ideas for enhancing your book club. The suggested questions are intended to help your reading group find new and interesting angles and topics for your discussion. We hope that these ideas will enrich your conversation and increase your enjoyment of the book

Following his acclaimed New York Times bestseller, Did You Ever Have a Family, Bill Clegg returns with a deeply moving, emotionally resonant second novel about the complicated bonds and breaking points of friendship, the corrosive forces of secrets, the heartbeat of longing, and the redemption found in forgiveness.

Many seemingly disconnected lives come together as half-century-old secrets begin to surface. It is in this moment that Bill Clegg reminds us how choices—to connect, to betray, to protect—become our legacy.

1. The End of the Day is told through many different perspectives: Dana, Jackie, Lupita, Floyd, Alice, and Hap. Whose voice did you most identify with and why? Did your opinion of any of the characters change throughout the story?

2. When we first meet Dana, she is annoyed by her staff, most particularly by a woman named Marcella, whom she describes as patronizing. Do you think she is? Why do you think Marcella has to approach Dana in this way?

3. Edgeweather is described in many different ways throughout the book, both as a crumbling home with only one tenant and a grand estate. Discuss how the house mirrors the characters’ own personal lives throughout the novel.

4. Jackie’s mother says about Dana and her family that “Those people . . . they don’t treat people the way we do” (pg. 20). Jackie shares this with Dana while mocking her mom, though she admits that it’s partially true. What do you think Jackie’s mother meant by that? Do you think she knew more information about the Goss family than she lets on?

5. Why do you think it took Hap until his father’s death to realize that his family was hiding something? What do you think he did with all the information that Dana tells him?

6. Hap and Gene are childhood friends, who have grown apart. “No longer playing any of the important roles he’d played since they were boys—trusted ally, fierce rival, finisher of sentences, co-creator of secret languages, relentless corruptor, conscience, confessor, penitent, defender, witness, brother” (pg. 133). Why do you think Hap feels loyalty to continue to be friends with Gene? Compare the friendship between Hap and Gene with the friendship between Dana and Jackie.

7. Lupita finds freedom in the feeling of driving Dana’s yellow convertible and even wearing Dana’s clothes without her knowledge. What do you think Lupita found in this experience? How does her relationship change with Dana’s possessions (the car, robe, and her room) throughout the book?

8. When Jackie is reflecting on why she didn’t confront Dana when they were young, she considers the tenuousness of friendships. “No lawyer or judge, mediator or priest needed. Not to make it, nor to unmake it, which requires even less. To end a friendship, it just takes someone willing to throw it away” (pg. 211). What do you think of Jackie’s perspective on friendship? Do you think Jackie and Dana would have remained friends if Floyd hadn’t come between them?

11. Why do you think Clegg chose to end the story on Lupita’s perspective? What do you think the ship that Lupita finally boards means? Who do you imagine is beside her?

12. The story weaves together characters from very different backgrounds whose lives overlap in various ways. What choices do you think unite characters who are otherwise very dissimilar? Which pairing of characters surprised you most?

1. The End of the Day shows the many ways that families and friends’ lives can intersect across generations. Create a family tree of the characters in the book. Which relationships do you think are strongest? Which fracture throughout the novel?

2. Lupita flees to Kauai where she finds she is able to rebuild her life far from New York. Why do you think Lupita is drawn to Hawaii in particular? What locations would members in your book club choose to live other than your current one?

3. Through the novel, character make choices (both seemingly small and large) that will affect the course of their lives. Assign each member of your book club a character (Dana, Jackie, Lupita, Floyd, Alice, and Hap) and have them identify what they think is the defining choice in their character’s story. How did their character’s choice impact the rest of the story? 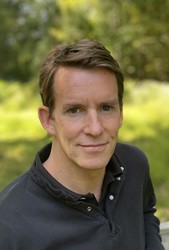 Bill Clegg is a literary agent in New York and the author of the bestselling memoirs Portrait of an Addict as a Young Man and Ninety Days. The author of the novels Did You Ever Have a Family and The End of the Day, he has written for the New York Times, Lapham’s Quarterly, New York magazine, The Guardian, and Harper’s Bazaar.

"Clegg delivers a thoughtful, well-observed story ... The splendid prose and orchestrated maneuvering will keep readers turning the pages and send them back to the beginning, to read it all over again."

"Written in lyrical, beautiful prose that makes even waking up seem like a poetic event, The End of the Day makes sense of the events of a single day in a compelling work of fiction."

“Remarkable… For the beautifully complex characters who populate The End of the Day, whom or what the truth actually sets free is richly called into question. With detail and empathy, Clegg is particularly effective at describing the subtleties of relationships. His work is political without being didactic or dogmatic… he illustrates the elusiveness of the American dream."

“As usual, Clegg’s prose is simple and graceful, his third-person character portraits precise, but his plotting, with its intricate, keen-minded twists give his writing the cumulative effect of poetic ambiguity and mystery. Clegg’s first novel was a novel of grief; this is a masterly story of an attempt at righting the misunderstandings of the past that is resonant and true to life’s inherent uncertainty."

“A declining heiress returns home for the first time in decades, but can’t remember why. Her former maid’s daughter runs a taxi company in Hawaii. Her aunt is left with a baby whose parents have vanished. Leave it to Clegg to brilliantly bind these threads.”

“A mesmerizing book about family and memory and friendship and the long arc of life. I've loved every book by Bill Clegg, but The End of the Day might be my favorite because these characters, these quietly remarkable women, remind me of the epic lives hidden within all of us. Reading it is like studying a stained-glass window up close, each piece bright and sharply cut, but when you step back and see it as a whole you discover a large, beautiful, mysterious work of art.”

“Ambitious in scope, tender in detail, Bill Clegg’s The End of the Day is a story that crosses boundaries of age, class, gender. Anyone who has a beating heart will find some part of themselves in this story.”

“Delicate, deeply observed, and deftly crafted, THE END OF THE DAY is a beautiful mosaic of memory, regret, and loss.  A triumphant and noble novel.”

"In his utterly absorbing and socially trenchant novel, Bill Clegg’s vision is both intimate and grand. He paints precise and unerring portraits of his characters and the dynamics of class that inform their lives while at the same time asking sweeping and urgent questions: What is fate? What responsibilities do we bear for the way in which our actions and our passions alter the course of one another’s lives? The novel’s shattering resonance emerges from its masterful construction. Clegg leads us, and his characters, toward the discovery of long-buried secrets at the same time that he shows us that the facts of a life do not always add up to the truth."

"In this elegant, touching and beautifully serious novel, Bill Clegg has written characters he seems to have known all his life.”

– Alejandro Zambra, author of My Documents

“An exquisitely structured book of reckonings. Clegg is a fearless investigator of the past and how it, no matter how buried we believe it to be, will always rise. The End of the Day left me shaken.”

“Intricately plotted… measured pace, slipping smoothly from the life of one character to another and from present to past, revealing how entire lives have been marked indelibly by teenage impulses and mistakes. Though Lupita believes at one point that she is ‘safe from the truth,’ The End of the Day explains with painful clarity why, in some lives, that can never be."

“Magnetically insightful storytelling. Clegg grasps what is deeply human, from a subtle movement to the spirit in a laugh shared between friends. His diction mirrors the emotional gravity in each scene, which, combined with raw honesty, is what makes his writing so relatable. … Enriching and engrossing, The End of the Day traces the complicated web of connection in a person’s life that exposes the deepest, and occasionally darkest, sense of what it means to be human. Love, friendship and the connections that bring us together are the fabric of Clegg’s masterful framework of a novel with an impeccable scope and unforgettable characters.”

“[An] intricate tale of class and consequence.”

The End of the Day