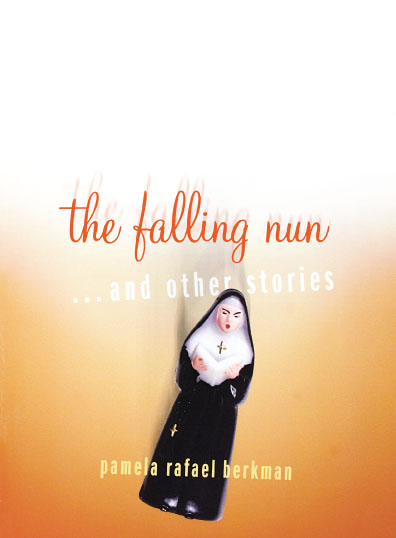 In this collection of twelve dazzling and sensual stories, Pamela Rafael Berkman explores the perplexities of contemporary life through the eyes of women searching for love, truth, and faith. In the title story, a group of coworkers who order miniature plastic nuns rumored to bring love suffer surprising and disheartening consequences. In "Tat," the heroine gets an elaborate Victorian valentine tattooed on her arm and learns the real meaning of wearing her heart on her sleeve. And in "Merry Christmas, Charlie Brown," the classic holiday program brings temporary peace to a troubled young woman. Throughout, miracles and revelations abound, appearing in the most unexpected places -- a planetarium on a college campus, a yuppie Christmas party, a silversmith's booth at an outdoor fair, a corner bar on Halloween. In capturing the dilemmas and difficulties of our times, Berkman brings to life the eternal longings of the human heart.

By clicking 'Sign me up' I acknowledge that I have read and agree to the privacy policy and terms of use. Free ebook offer available to NEW CA subscribers only. Offer redeemable at Simon & Schuster's ebook fulfillment partner. Must redeem within 90 days. See full terms and conditions and this month's choices.
A Touchstone Reading Group Guide
The Falling Nun
1. In "Tat," Liberty has a religious experience of sorts during her time in the tattoo parlor, and gets a glimpse of a universe where "it seems to her that everyone she knows is so full of love and suffering, so very full, that it overflows into wounds." What is it about getting her tattoo that leaves Liberty feeling so at peace? How does Jack, in his role as a guide, help Liberty experience this feeling?
2. "She moved toward him, and away from him, and toward him, and away from him, and in going toward him she was also going away from him, and maybe he was doing the same." This description of the dynamic between Elizabeth and Vinnie in "Gold Glitter," while specifically sexual in this instance, could easily describe the dynamic between other characters in this collection as well, as they constantly test the boundaries and either shy away from or take risks with their interpersonal relationships. In what ways is this quote representative of larger issues? Keeping this hot/cold, push/pull dynamic in mind, do you think honesty or commitment is possible for the people in these stories?
3. In a sense, it seems that Ronnie in "Veronica" is actively trying not to believe, chanting what almost seems like a prayer in and of itself: "I don't believe, I don't believe." Do you think Ronnie is a believer? Is there any resolution to the girl's struggle by the end of the story? Do you think Sister Veronica's confession will add to Ronnie's confusion, to her further disillusionment with her faith, or will it somehow help to relieve it?
4. "There is such a thing as sisterhood, isn't there?" questions the narrator in "The Falling Nun." How are relationships between women presented in this book? What do the women in these stories need from each other that they can't get from men? Anything? Does sisterhood, in fact, exist at all? Which friendships between women seem fulfilling and healthy, and which are somehow lacking? What are the complexities in each type of relationship?
5. As Ramon kisses Miranda in "Bethlehem" she "feels something intangible, like light, a glow, a soft diffusion, traveling from Ramon's mouth to hers." In what ways does this quote shed light on Ramon's function in the story? Is he reminiscent of other characters in this collection? Has Miranda found salvation in the end? What is it about Ramon that allows him to succeed in the face of obvious clinical depression when doctors and prescriptions have failed?
6. "Witch" pulls the reader into the fantastical vision of the narrator, a vision that straddles the "make believe" world of witches and potions, and the "real life" world of ballet, school, and parents. To what extent did you question the narrator's view of the world around her? Keeping in mind that her twin grows up to be a "normal" woman, who is ultimately disapproving and frightened of her sister, discuss whether this is a modern-day fairy tale, or if it is a journey into the mind of a madwoman. Are the two mutually exclusive?
7. In the story "Snakes" the narrator speaks of a "metal box, deeply, deeply buried beneath the flesh...and I could take nothing else inside myself but what went in this box." What do you make of the box imagery? What are the "other things" in the box that she vaguely refers to knowing about? How does this tie into her mother and her paralyzing fear of snakes?
8. Early on in "Men Have More Upper Body Strength," what elements set the tone for the rest of the story and highlight the gender dynamics that are at work here? Did you find it surprising and/or refreshing to see women, who are often portrayed as victims, acting as predators?
9. Brigid's motivations in this story have nothing to do with sex or desire: "She felt nothing that reminded her of arousal. She wasn't going to come and she knew it. She wasn't even turned on. She didn't care. That had nothing to do with anything." Why do you think Brigid unleashes the total force of her resentment and rage onto Boniface, not only raping him but wanting to punch him in the mouth and humiliate him?
10. In "Holy Holy Holy" it seems that serious faith is somehow humorous or "a good party story," which is how the narrator describes her Catholic school days and the prayer that the temp offered for her carpal tunnel syndrome. What is it about religion that strikes the narrator and the other party guests as absurd or funny? How does the quote from The Revelation of St. John the Divine, which is one of only two quotes to start off a story, shed light on the ending? Why does the narrator break down crying?
11. What is the significance of "Playing Crucifixion" for the boy in this story? How does this strange game tie into his feelings for his father and his longing to know John Robert Flynn, a man who, like Jesus, made "the Supreme Sacrifice"?
12. Discuss the parallels between "Tat" and "Merry Christmas, Charlie Brown," the first and last stories in this collection, looking not only at obvious character overlap but at the larger ideological and spiritual themes that they share. What exactly are these two women searching for in seemingly different ways -- Liberty through piercing and tattoos, and Molly through cutting? Does the idea of flagellation and achievement through suffering materialize in other stories as well?
Pamela Rafael Berkman

Pamela Rafael Berkman is the author of Her Infinite Variety: Stories of Shakespeare and the Women He Loved and The Falling Nun. Her short story “Duty” from Her Infinite Variety appears in Houghton Mifflin Harcourt’s leading national ELA curriculum, Collections, and the title story from The Falling Nun was nominated for a Pushcart Prize. Pam is an acquiring editor at North Atlantic Books and has worked in the publishing industry for over twenty years. She lives in the San Francisco Bay Area with her family.

Robin Maxwell author of Virgin and The Queen's Bastard The subtle way in which these stories are linked and interwoven takes my breath away. Berkman's rendering of character and situations is unflinching, yet each piece is brushed with a touch of magic. Astonishing!

Joan Silber author of Lucky Us Pamela Berkman's stories beautifully evoke the chancy, surprising lives of young women, characters whose inventiveness glows -- along with their impatience -- under love's injustices. This is clear-eyed fiction, full of freshness and wit.