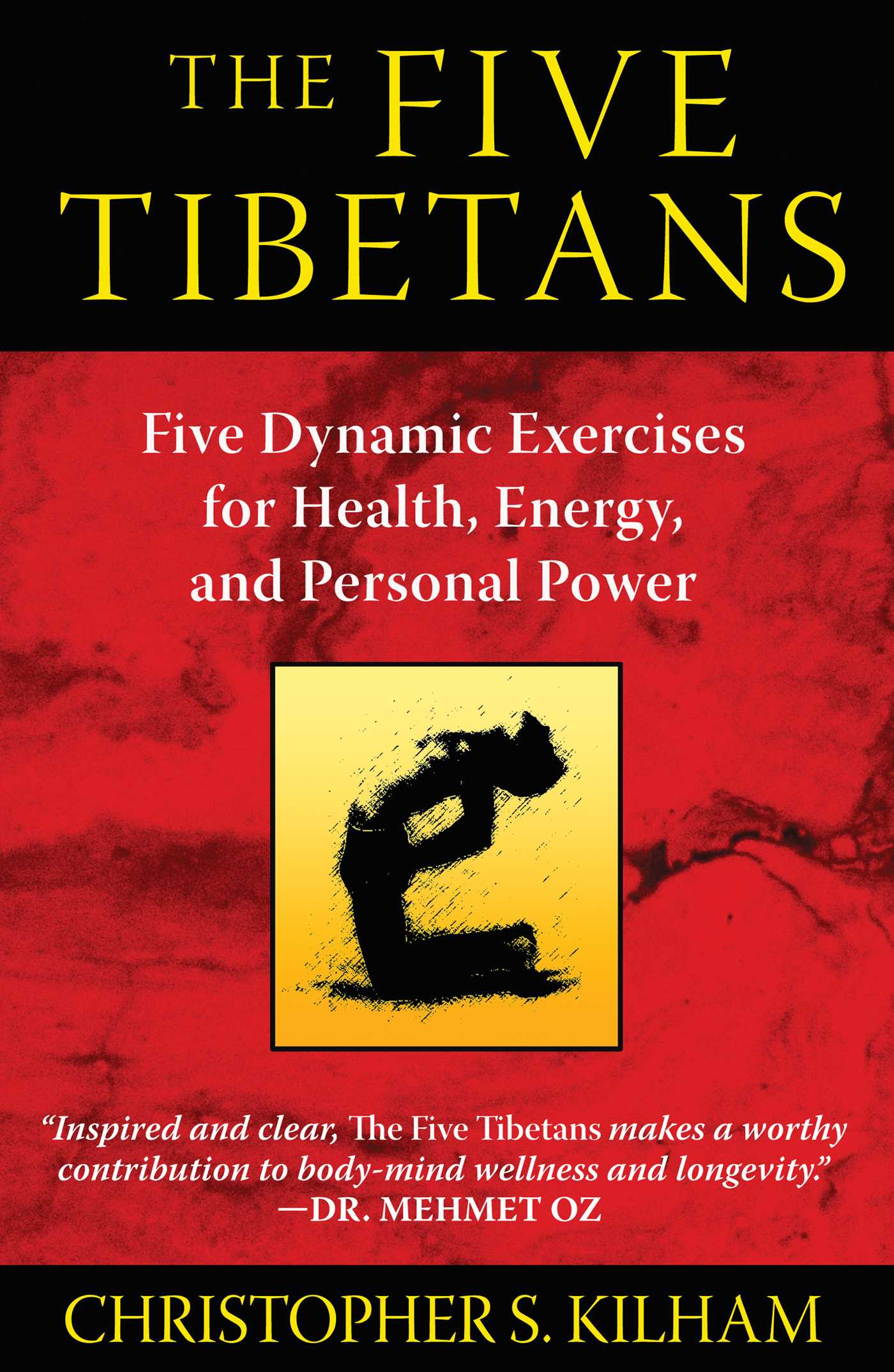 • Includes a new chapter on the author’s continued devotion to this daily practice, even during his extensive worldwide travels

• Explains how regular practice of these postures relieves muscle tension and nervous stress, improves digestion, strengthens the cardiovascular system, tunes and energizes the chakras, and leads to deep relaxation and well-being

Originating in the Himalayas, the five yogic exercises known as the Five Tibetans take only a minimum of daily time and effort but dramatically increase physical strength, energy, and suppleness as well as mental acuity. Also called the Five Rites of Rejuvenation, these exercises were brought to the West in the early 20th century by a retired British army officer who learned them in a Tibetan lamasery. Regular practice of these postures relieves muscle tension and nervous stress, improves digestion, strengthens the cardiovascular system, tunes and energizes the chakras, and leads to deep relaxation and well-being. Enhancing the innate energetic power of the body and mind, these exercises provide a vehicle for enlivening the senses and harnessing energy for the purpose of self-transformation. Since 1978, Christopher Kilham has taught these exercises to thousands of people seeking a healthier lifestyle.

The Five Tibetans has established itself as a classic among yoga practitioners and teachers alike. In this new edition the author shares his own positive experiences from more than 30 years’ devotion to the practice, even during his extensive worldwide travels, and explores the spiritual benefits of the Five Tibetans as well as the profound impact the practice has on health, longevity, and healthy aging.

Chapter 1
About the Five Tibetans

First Experiences with the Five Tibetans

In 1976, I was invited to live and teach health classes at the Institute of Mentalphysics, a spiritual retreat center in Joshua Tree, California. At the time that I moved to the institute only a few residents occupied the center’s apartments. One of those, a woman named Rochelle, was a wonderfully vibrant character in her early seventies with a history of experiences that comprised an impressive romp through a who’s who of gurus, psychics, sages, adepts, seers, avatars, saints, and wanna-be holy men and women. A perfect blend of curiosity, intelligence, positive attitude, and skepticism, and with an appetite for diverse experiences, Rochelle had tried every major and minor spiritual trip popular at that time and knew all the secret mantras and supposed inner knowledge of most of them.

Seeing that I was a devoted yoga practitioner, Rochelle gave me a copy of an interesting little book titled The Five Rites of Rejuvenation authored by a man named Peter Kelder and first published in 1939. The book recounted an engaging story about the discovery of five yoga exercises taught to Kelder by a retired British army officer who had learned the exercises from some Tibetan lamas in a monastery in the Himalayas. According to the book, the Five Rites of Rejuvenation were reputed to strengthen the body, enhance energy, regenerate body and mind, and stem the aging process.

Intrigued by Kelder’s account of their virtues, I began to include the Five Rites of Rejuvenation in my daily yoga routine. I liked the way they had been discovered, the romance of how they had been introduced to a small number of Westerners by the man who had learned them in the Himalayas, and the illustrations of the methods themselves. They were similar in appearance to yoga exercises with which I was already familiar, but they were also different enough that they in no way duplicated other practices in my daily routine.

After practicing the Five Tibetans for two years, I was convinced that, at the very least, they were extraordinary. Despite the fact that they represented only minutes in my daily yoga regimen, I felt invigorated from practicing them.

Now, decades later, I can say that the Five Tibetans definitely help maintain more youthful strength, flexibility, balance, circulation, energy, endurance, and stamina. I also credit them with helping to keep me mentally sharp. They open up the body/mind energy system and seem to balance energy in a way that I have not experienced with any other individual yoga method or set of yoga practices. Not bad at all for a ten-minute daily practice.

Yoga helps you rise to the challenge of living. It keeps you from being ground down by circumstance. It puts fire into the body and mind and leads to being balanced and wise. It makes a lot of sense to practice. In this volume you are given tools to strengthen your body, enhance your health, increase your energy, hone your concentration, and experience the profound power and peace of deep meditation. You’ll find a comprehensive approach to a personal yoga practice using the Five Tibetans as a foundation. Specific information about the human energy system, the chakras, and kundalini meditation will give you a complete context for your practice. You don’t have to endure ascetic austerities or the rugged Himalayan terrain to get at these teachings. They are accessible without restriction, the way all valid teachings should be.

Sit up straight with your legs outstretched in front of you. Place the palms of your hands flat on the ground beside your hips. Positioning of the hands is very important; they must be placed exactly alongside the hips. Tuck your chin into your chest.

Inhaling through the nose, raise your hips as you bend your knees, bringing the soles of your feet flat to the ground and dropping your head all the way back. You will come into a position in which the trunk is parallel to the ground while the arms and legs are perpendicular. Exhale through either the nose or mouth as you come down to the starting position. Repeat this motion twenty-one times in a steady, unbroken rhythm. Do not let your feet slide. The feet should stay in the same place through this whole exercise. Also, the arms should not bend; the movement is instead accomplished by pivoting at the shoulders.

Christopher S. Kilham has taught yoga, meditation, and natural health since 1978. Known for his appearances as the Medicine Hunter on the Dr. Oz Show, CNN Health, and FOX News Health, he has conducted medicinal research in more than 30 countries across 5 continents and the South Pacific. The author of many articles and several books, including Hot Plants, The Five Tibetans, Kava: Medicine Hunting in Paradise, and The Whole Food Bible, he lives in Leverett, Massachusetts.

“Readers of every background will benefit from reading this text. It is informative but endearing, and the colloquial nature of the Medicine Hunter’s no-apologies, straightforward discourse will enlighten those who are already practicing students, and those who wish to become so. Everyone - even those who feel they don’t have time in their busy schedules for yoga - should read this book.”

“Powerful life lesson, both on and off the mat.”

“I tried The Five Tibetans and all I can say is that they are powerful.”

“I know hundreds of individuals who swear by this practice on a daily basis. Chris’s ability to translate this powerful teaching in a simple way has led to great self-transformation.”

“In The Five Tibetans, Chris Kilham offers a simple yet profound practice that promotes health and longevity, is centering, and leads to peace of mind. Chris is a jewel among men!”

“This book is packed full of expert information . . . clear, concise, and easy to understand . . . a wealth of information and advice from many years of teaching and personal experiences. . . a wonderful way to start or end your day.”

“Kilham brings to the Five Tibetans beautifully written chapters about kundalini, the chakras, and an especially insightful instruction on the role of breathing while doing each rite. Excellent and recommended.”

“The exercises are easily learned from the text and accompanying photographs.”

“A time-honored classic that belongs in every yoga library. A true yogi, Chris’s voice is strong, sensitive, and clear; his calling deep and genuine.”

“Inspired and clear, The Five Tibetans makes a worthy contribution to body-mind wellness and longevity.”

“The Five Tibetans are a perfect practice for a balanced life and a healthy body.”