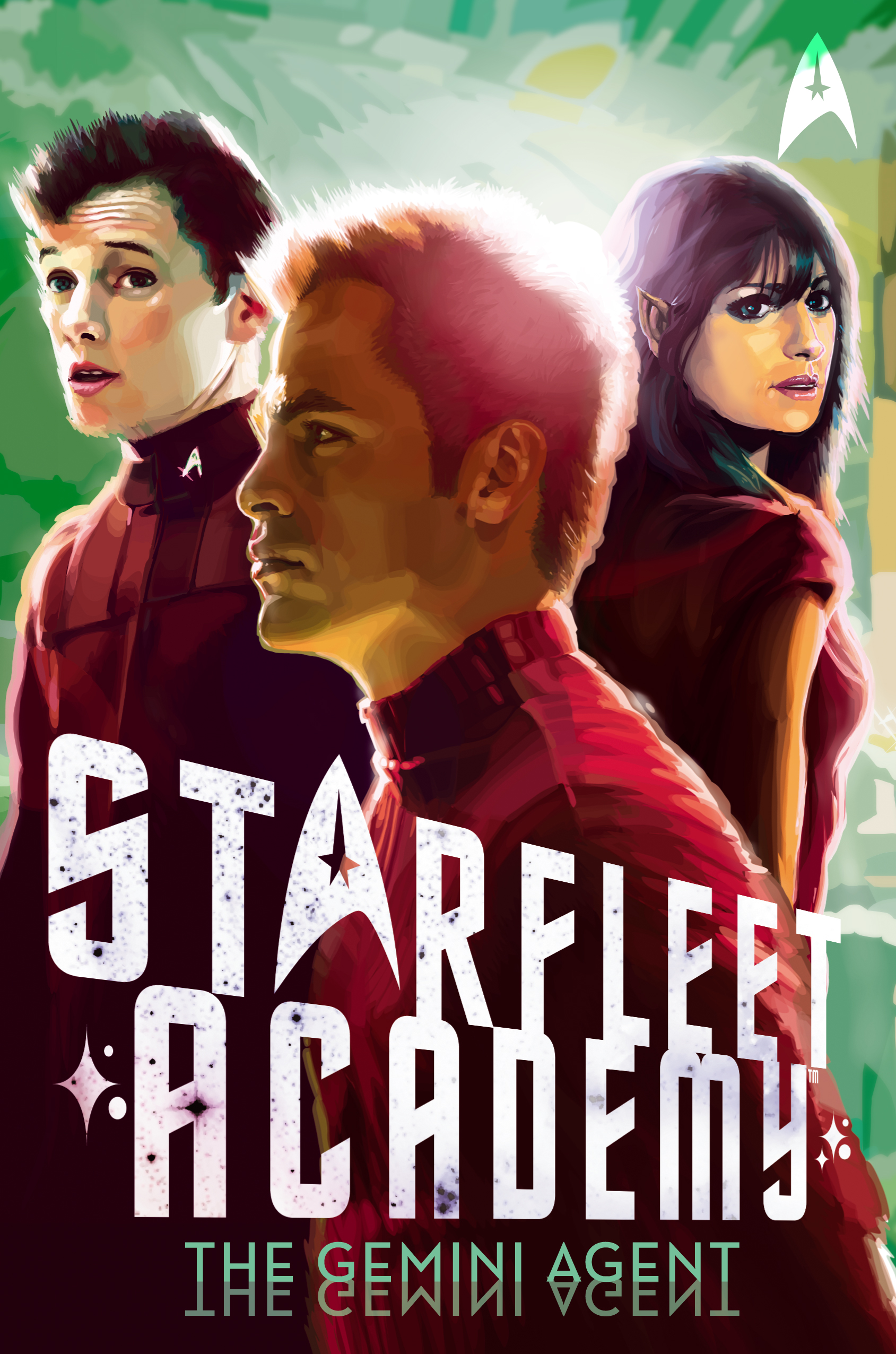 In The Gemini Agent, as first-year final exams week kicks off, several incident reports with serious allegations against James T. Kirk end up on the Commandant of Midshipmen’s desk. None of the allegations are true, of course… or are they? Kirk is being plagued by mysterious blackout periods, so he finds the allegations difficult to refute. During these blackout periods, he has no recollection of what he did, save for some very disturbing and disjointed memories. Kirk needs his friends, Bones and Uhura to help prove his innocence. Who is targeting Kirk, and why is he being targeted? And how far are they willing to go? Someone close to Kirk holds the answers to all of these questions, but can he put the pieces together before it’s too late?

The Gemini Agent CH.1.13 Gemini Away
The war is coming, thought Nverinn wearily.

As always, it would be fought by the young.

Nverinn tr’Rehu could not fathom how anyone could doubt these facts: war coming likely within a decade, and thus the imperative of aiming the attention of the Star Empire’s laser on the young. Both sides would send their ranks into hell’s mouth. The best of those warriors, the ones who would turn the tide—whether Romulan or Federation—well, right now the males could barely grow facial hair, and the females were only recently capable of bearing offspring.

In ten years these young would be in the front ranks.

Everything would depend on them.

His desk workscreen beeped. Nverinn, deep in thought, stared down at the call icon that popped up on-screen. He considered ignoring it, but after a few seconds he reconsidered and tapped the screen.

“I have the senator for you,” said a voice through the desk speaker.

Nverinn tapped the screen again and a window opened.

“Hello, Nverinn,” said the face that appeared. Her mane of graying hair was still a remarkable thing. Most Romulans, like Nverinn, had dark black hair. Tashal had been gifted with a head of beautiful warm brown hair that she was secretly very vain about. It framed her face like a luminous aura.

Tashal smiled, though her eyes did not. “Not well,” she said.

Nverinn nodded and then said, “You have bad news for me, I expect.”

The Romulan Senate, the military High Command, and the Tal Shiar intelligence agency—the three-headed imperial leviathan—had been revisiting Romulan force tactics for years, preparing for what everyone knew was an inevitable reengagement with United Earth and the Federation. There was so much talk of the humiliation at Cheron nearly a century ago spawning new tactics and technology. But so very little talk of the young warriors who would fight the next war.

Nverinn was just a scientist, but he had longtime allies in all three branches of leadership. Senator Tashal was one of them. He’d known her for more than fifty years. They’d once been lovers, but that seemed like two lifetimes ago.

“I managed to get approvals for your project,” said Tashal.

At this, Nverinn sat bolt upright. This was entirely unexpected.

“Yes,” she said. “But there is one disturbing condition, courtesy of our friends in Tal Shiar.” After an extended pause, she added, “You’re not going to like it.”

“Tell me,” said Nverinn. As he spoke, he tapped at his workscreen, opening up several more windows. Soon he had half a dozen data apps arrayed across the desktop. “I can activate Gemini on a moment’s notice. Literally, at the tap of a button.”

“The condition is this,” said Tashal. “One test agent may be activated.”

“Vorta Vor!” exclaimed Nverinn eagerly. “I have only one agent ready to release!”

But the senator sighed. “Please allow me to finish,” she said. “That is not the condition I was referring to.”

Nverinn stopped dragging open data windows and looked into Tashal’s eyes. They’d once been dazzling, bright as supergiant stars. But years of wearing a political mask, of infighting and intrigue and war planning, had left them darkened and wary and—when her guard was down, like now—openly sad.

“Once the agent has run its course,” said Tashal, “it must be wiped clean.”

Nverinn was shocked into silence.

The senator nodded for emphasis. “Terminated,” she said grimly.

Nverinn slumped in his chair. He gripped the armrests and his own eyes began to well up.

“It must be done for the Empire,” said Tashal quickly, and then she tapped the monitor, ending the conversation and disappearing from the screen.

This confirmed what Nverinn already knew: Tal Shiar was monitoring this conversation.