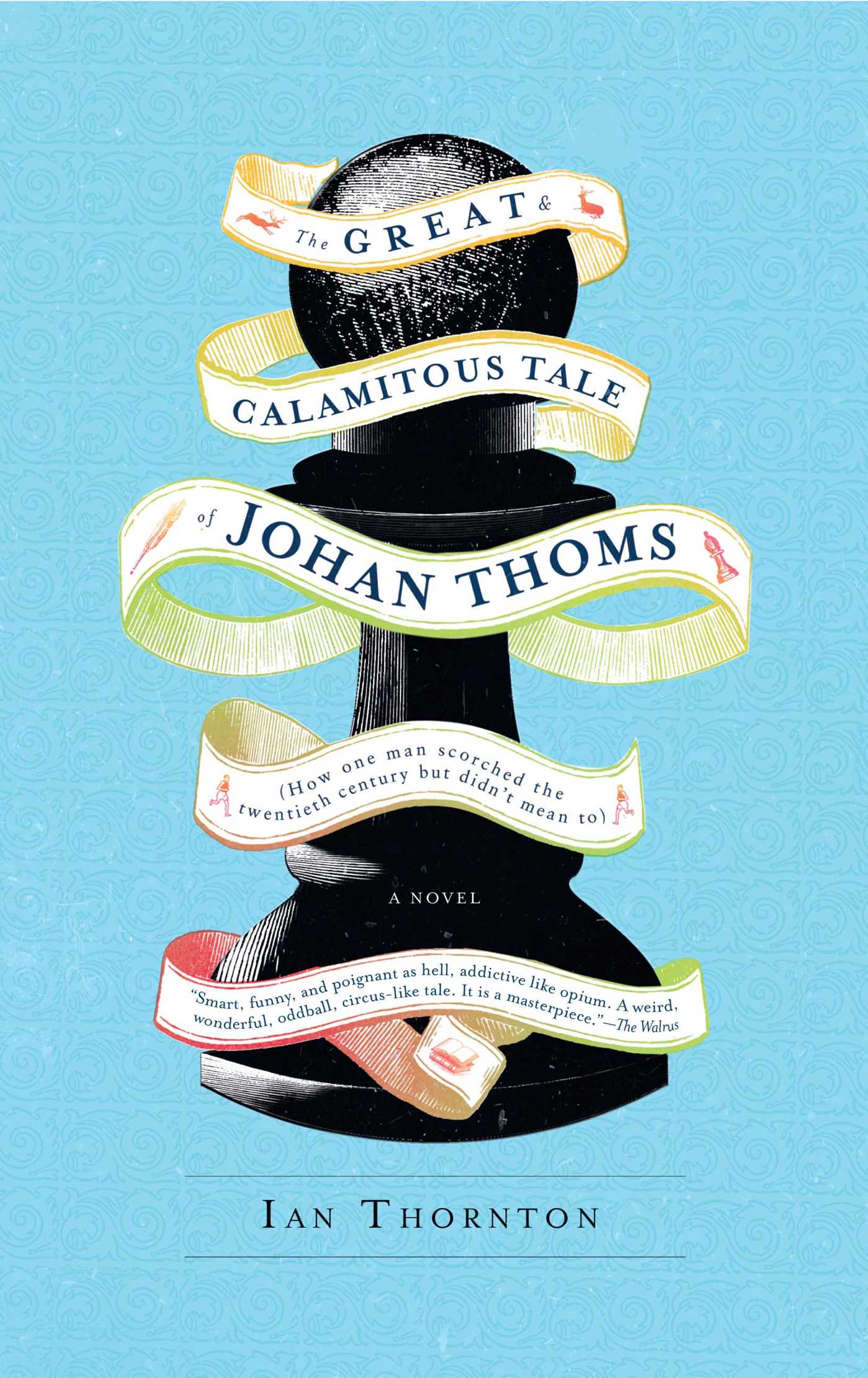 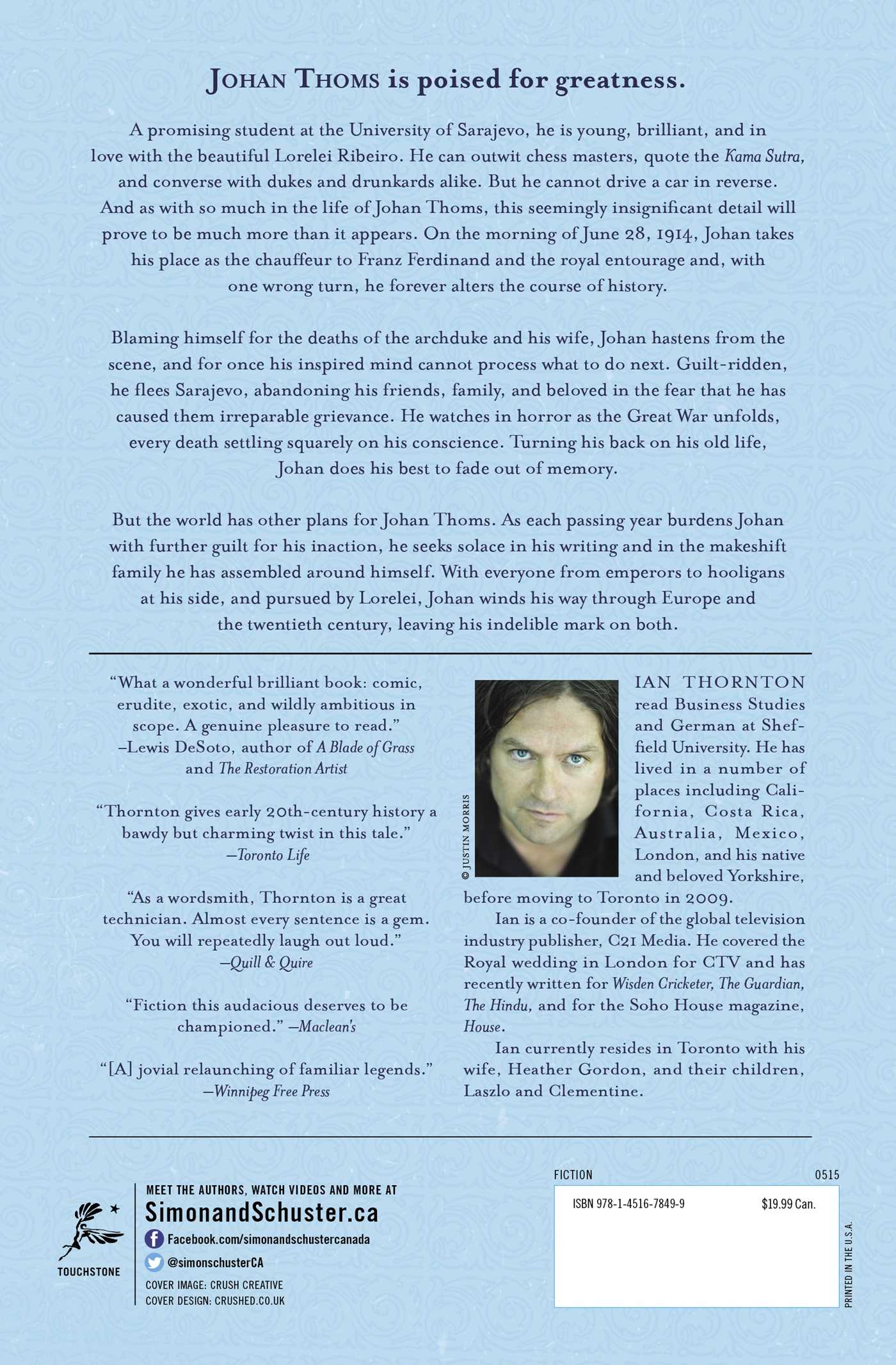 How One Man Scorched the Twentieth Century But Didn't Mean To

Ian Thornton’s remarkable debut novel, now in paperback, is a wild, rollicking novel on chance, friendship, love, regret, and the entire history of the twentieth century.

Johan Thoms is poised for greatness. A promising student at the University of Sarajevo, he is young, brilliant, and in love with the beautiful Lorelei Ribeiro. He can outwit chess masters, quote the Kama Sutra, and converse with dukes and drunkards alike. But he cannot drive a car in reverse. And as with so much in the life of Johan Thoms, this seemingly insignificant detail will prove to be much more than it appears. On the morning of June 28, 1914, Johan takes his place as the chauffeur to Franz Ferdinand and the Royal entourage, and with one wrong turn, he forever alters the course of history.

Blaming himself for the deaths of the Archduke and his wife, Johan hastens from the scene, and for once his inspired mind cannot process what to do next. Guilt-ridden, he flees Sarajevo, abandoning his friends, family, and beloved in the fear that he has caused them irreparable grievance. He watches in horror as the Great War unfolds, every death settling squarely on Johan’s conscience. Turning his back on his old life, Johan does his best to fade out of memory.

But the world has other plans for Johan Thoms. As each passing year burdens Johan with further guilt for his inaction, he seeks solace in his writing and in the makeshift family he has assembled around himself. With everyone from emperors to hooligans at his side, and pursued by the ever-determined Lorelei, Johan winds his way through Europe and the Twentieth Century, leaving his indelible mark on both.

Ian Thornton lives in Toronto with his wife and two children. This is his first novel.

“What a wonderful brilliant book: comic, erudite, exotic, and wildly ambitious in scope. A genuine pleasure to read.”

– Lewis DeSoto, author of A Blade of Grass and The Restoration Artist

“Thornton gives early 20th-century history a bawdy but charming twist in this tale.”

“As a wordsmith, Thornton is a great technician. Almost every sentence is a gem. You will repeatedly laugh out loud.”

“Fiction this audacious deserves to be championed.”

“[A] jovial relaunching of familiar legends.”

“[A] thoroughly entertaining and provocative first novel…What Thornton manages to do is take one tiny player in a monumental event and focus in on Johan Thoms with the careful research of an historian and the deft touch and aplomb of a true literary artist…The Great and Calamitous Tale of Johan Thoms is eminently readable, with great characters and thoughtful observations.”

“Smart as hell, funny as hell, poignant as hell, addictive like the opium, a wonderful, weird, oddball, circus-like tale that I enjoyed from the first word to the last – and then was sorry it was over…It is a masterpiece.”

How One Man Scorched the Twentieth Century But Didn't Mean To