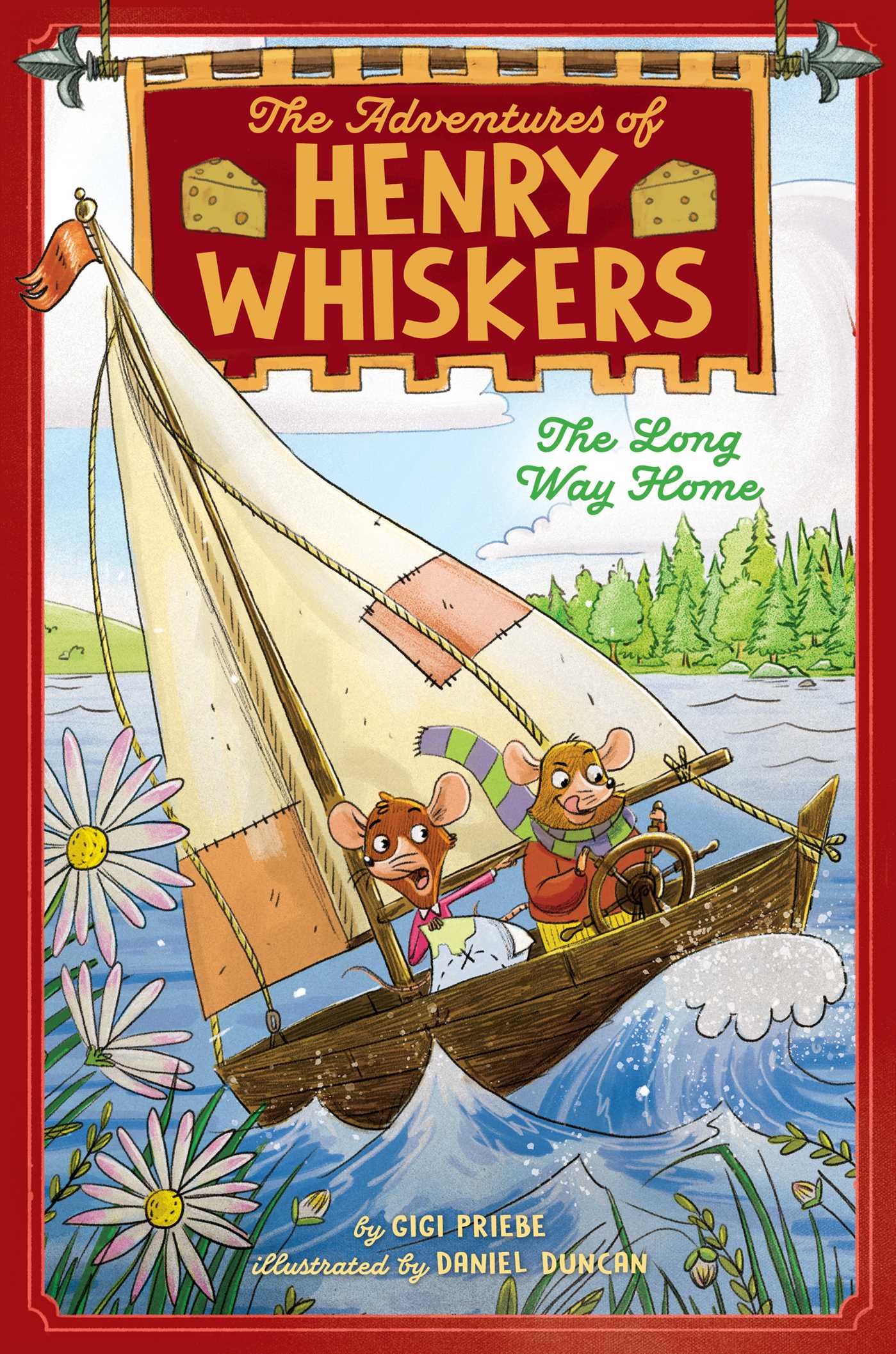 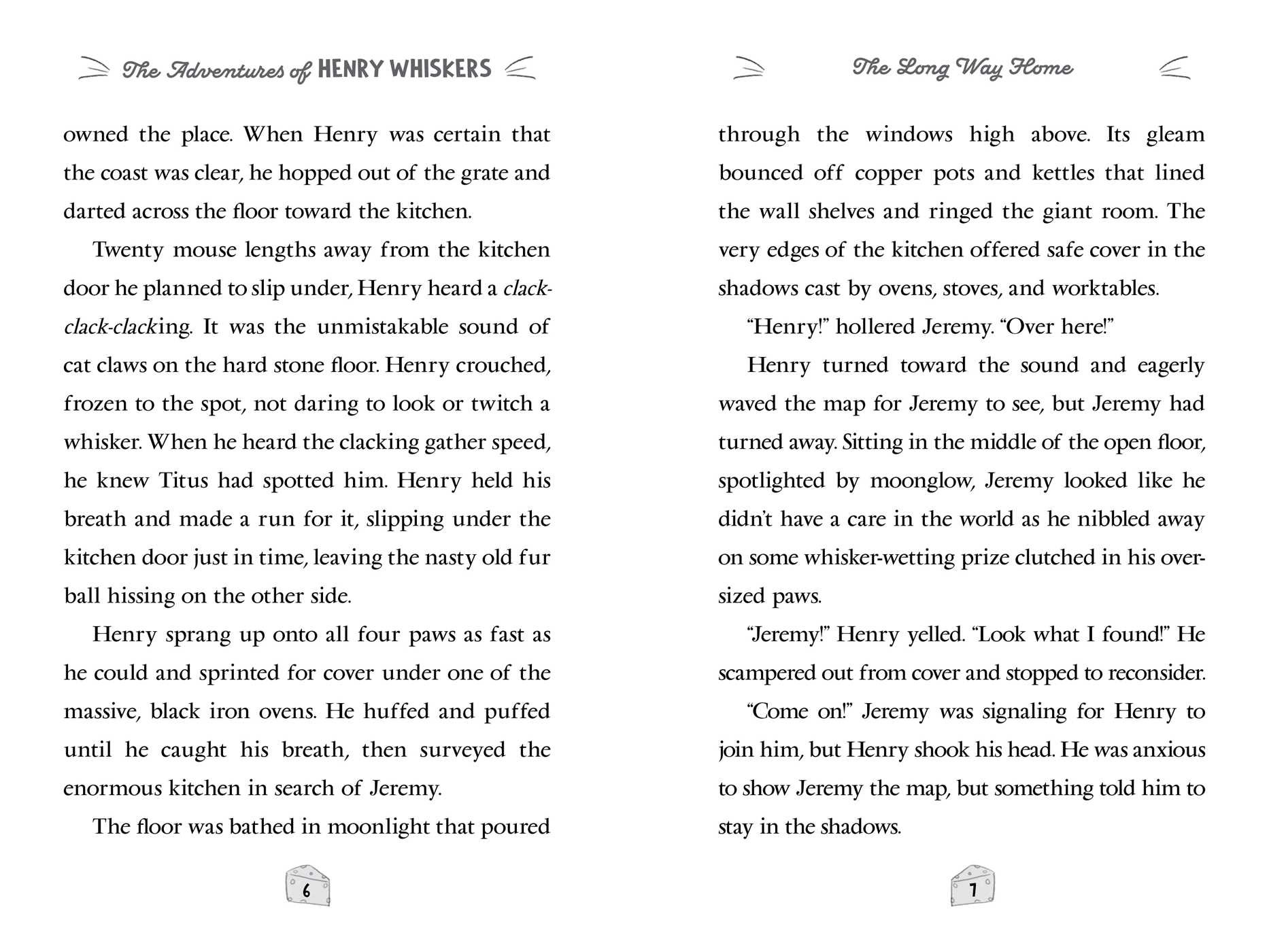 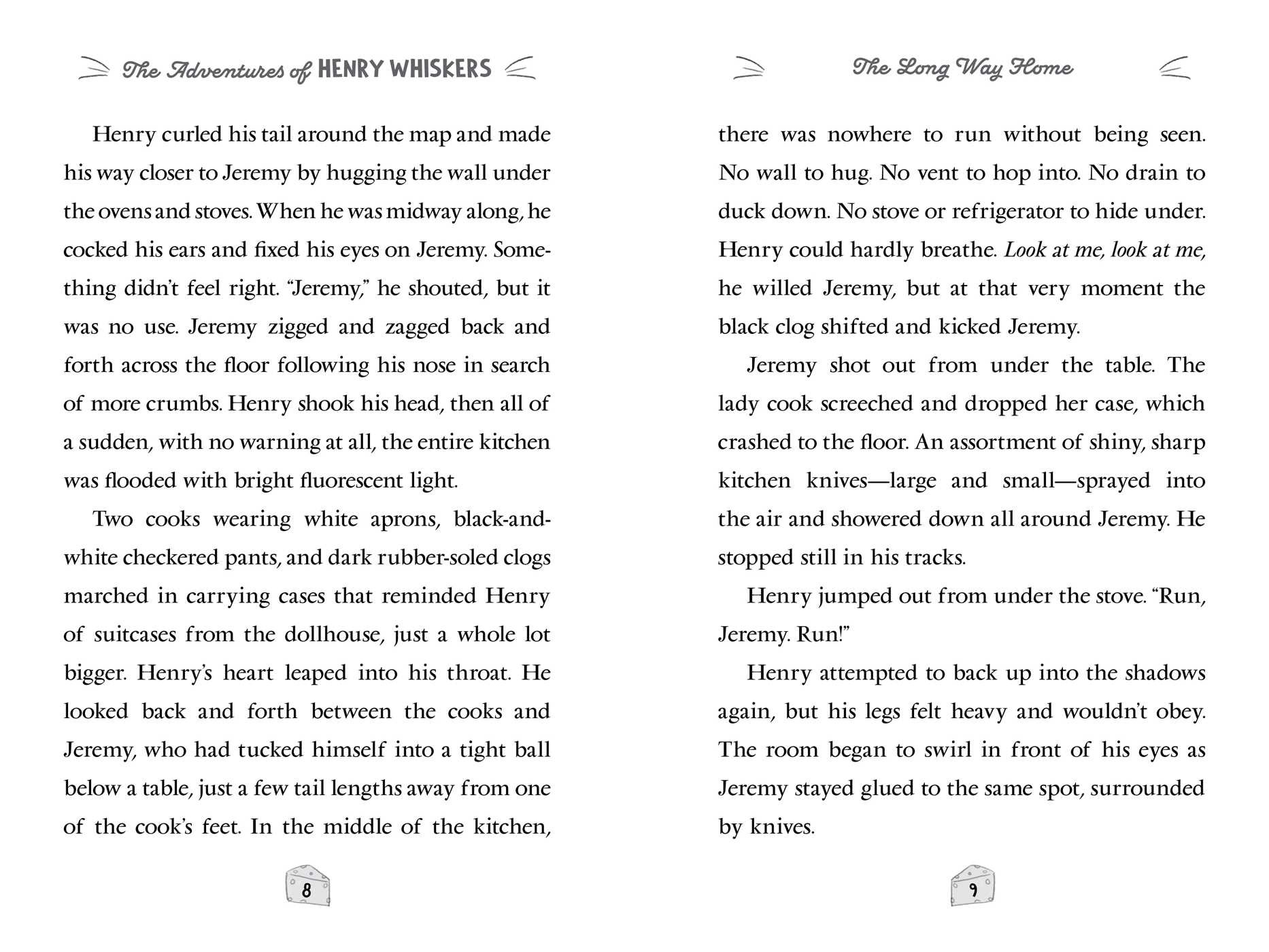 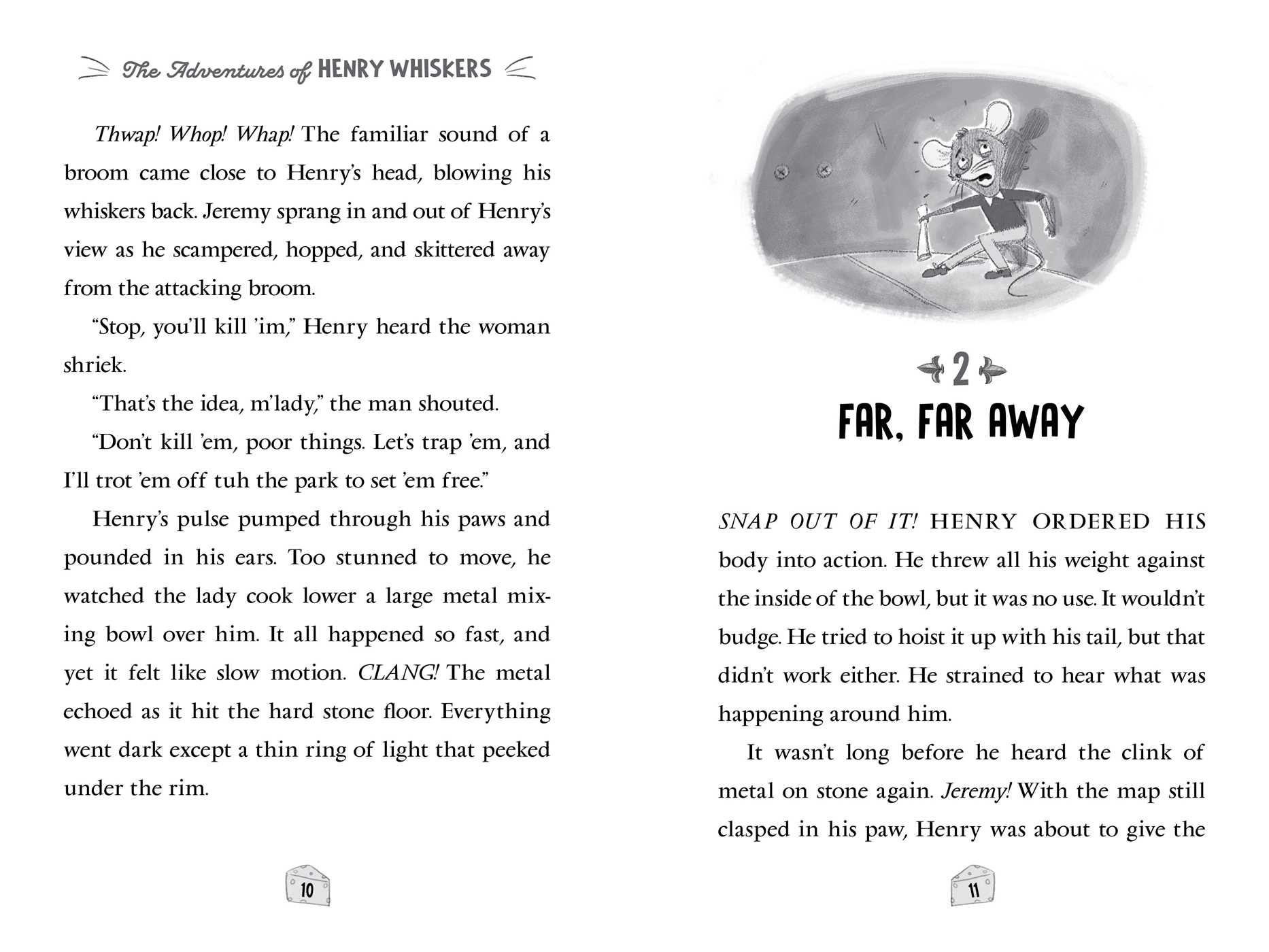 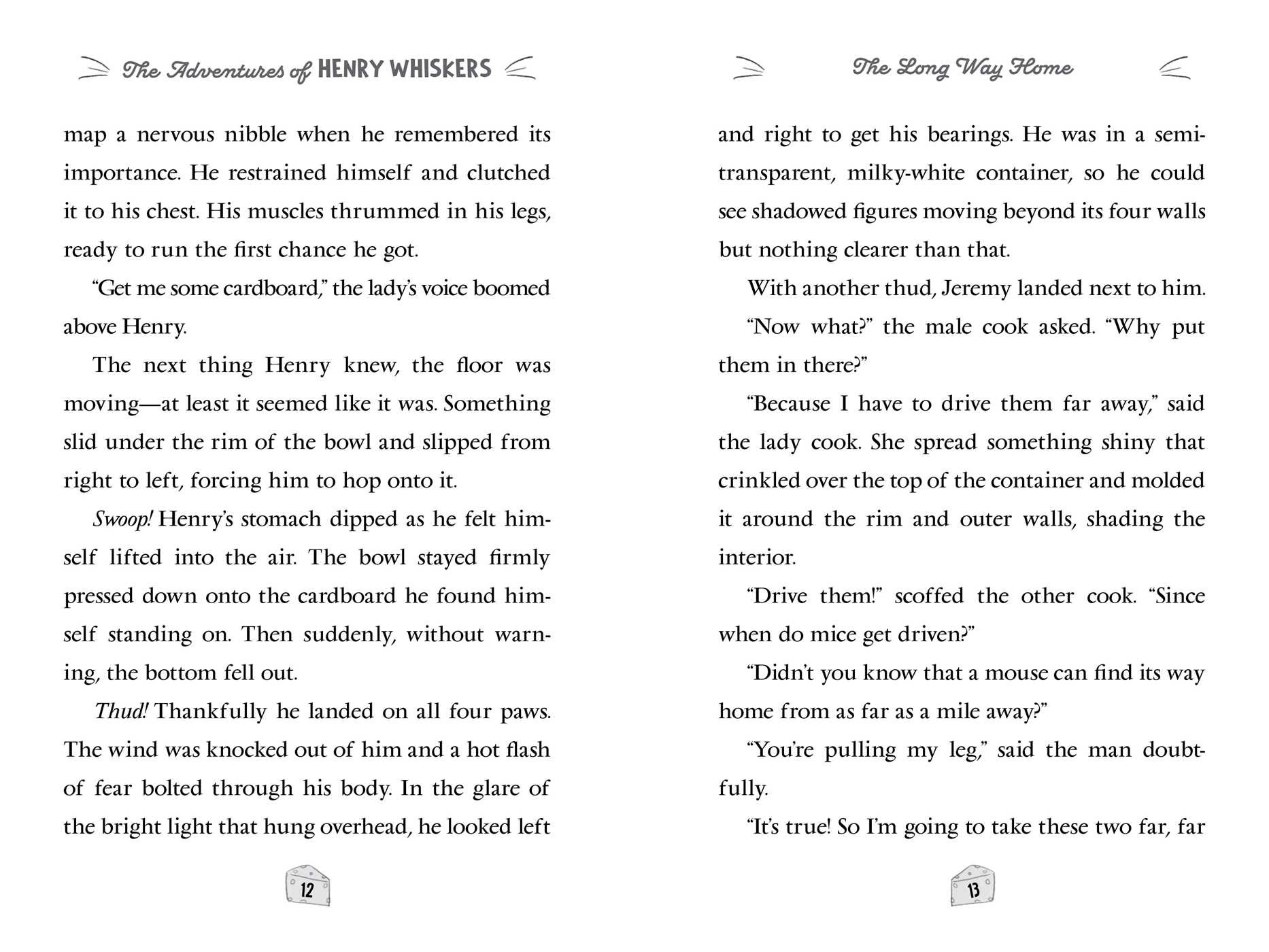 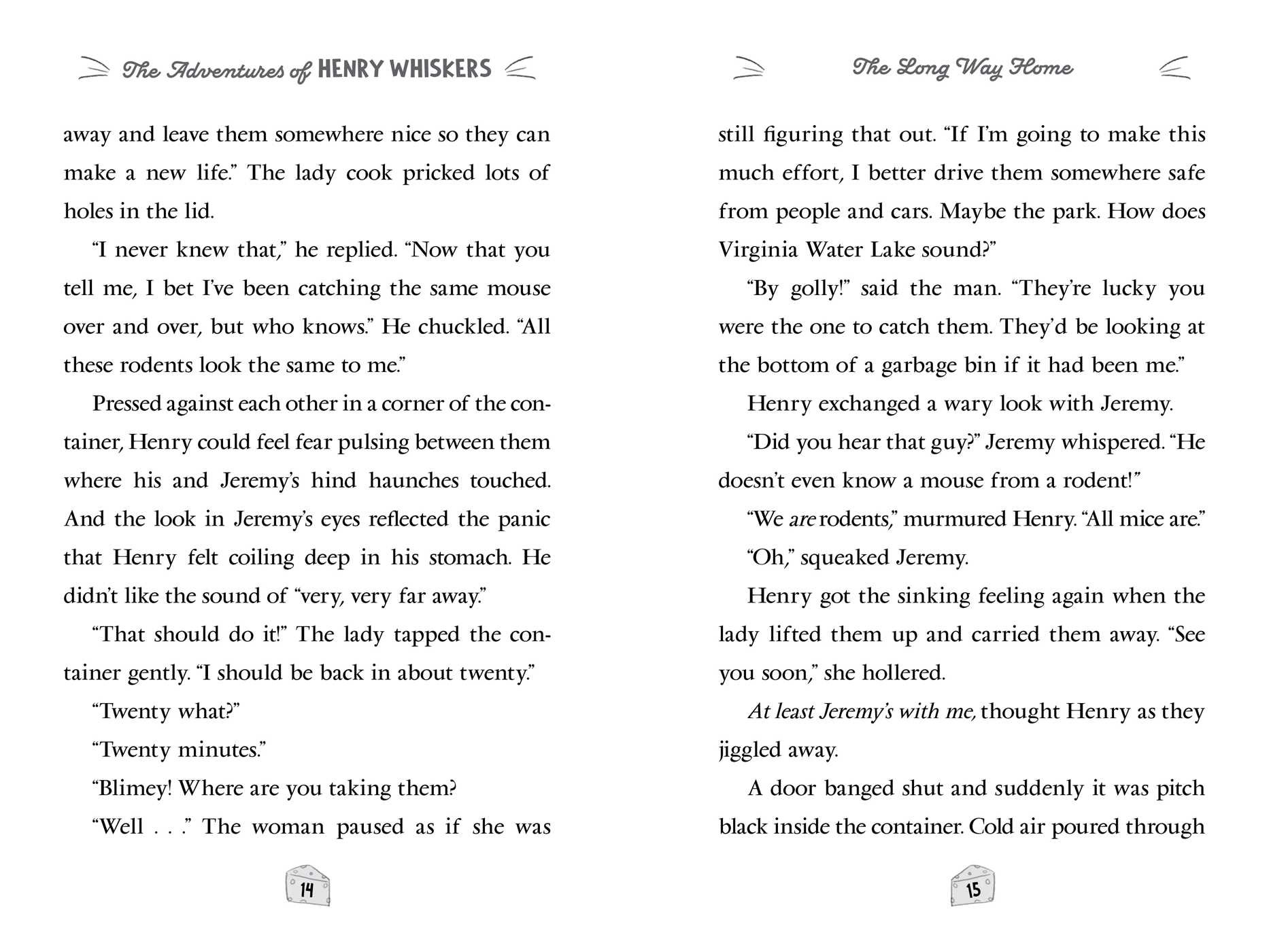 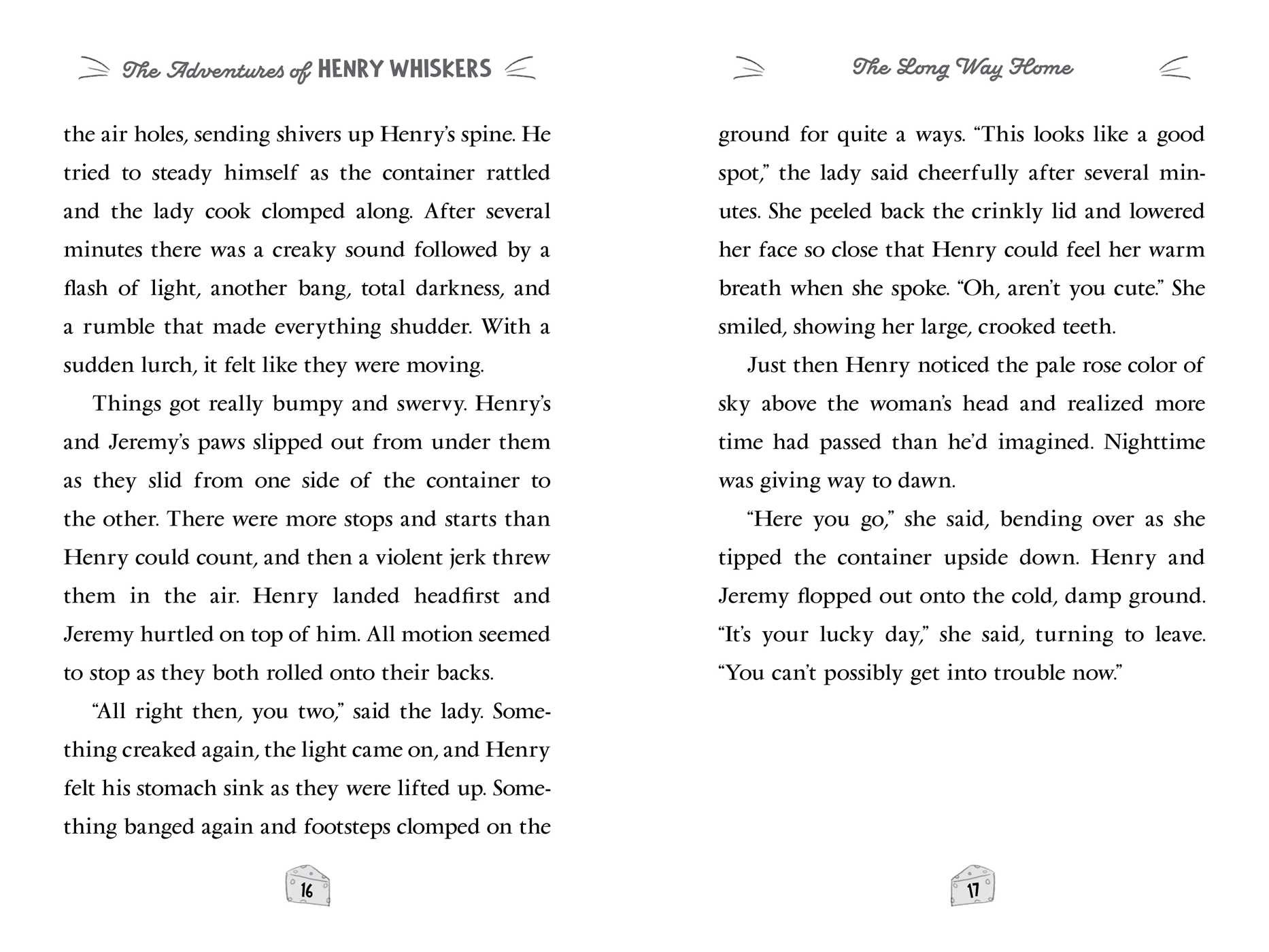 Henry Whiskers and his cousin, Jeremy, must find their way back home—Queen Mary’s dollhouse—and to Windsor Castle with the help of a mysterious treasure map in this fun, fast-paced follow up to The Adventures of Henry Whiskers.

Little Henry Whiskers is thrilled when he discovers an old, crinkly map, complete with a giant X marking a spot, full of treasure—at least, that’s what Henry thinks. All he knows is that this map is something BIG—he can feel it right down to the tip of his tail.

But before he can share his exciting find with his cousin and best friend, Jeremy, they find themselves in the danger zone: The Windsor Castle Kitchen. And after being unceremoniously caught and thrown out of the castle, with nothing but the map, the two little mice realize they have bigger problems than being caught in the kitchen! How will they get back to the dollhouse?

With the help of his cousin, Jeremy and a fellow field mouse named Wisely, the cousins battle a hungry falcon, an endless and stormy lake, and the maze of landmarks on the Windsor Castle Grounds as they try to find his way back home—and discover the mysterious map is more connected to the Whiskers family than either of them could have ever imagined.

1 A MAP
HENRY WHISKERS SUCKED IN HIS breath and clamped a paw over his mouth. His rounded ears flicked back and forth, listening for any sign of trouble. Certain it was safe to continue, he raised the crumpled wad of paper to his nose and sniffed its musty nooks and crannies, then gently uncrinkled it and spread it out on the desk. His whiskers twitched with anticipation as he smoothed away its wrinkles. His heart ticked faster. This was big! He could feel it! Right down to the tip of his tail.

A milky-white moon hung in the sky above Windsor Castle. Visitors and tour guides had long since gone home, including Warden, the tour guide in the exhibit room of the world’s most famous dollhouse. Sitting on its base, raised to eye level for visitors to view, Queen Mary’s Dollhouse glowed like a jewel in the middle of the dimly lit room. Standing five feet tall, eight feet long, and four feet wide, it made the perfect place for a family of mice to call home.

The night belonged to Henry! It was the only time Mother Mouse allowed him to roam the dollhouse and now he was convinced that he was onto something!

Only moments ago, he had been reading, sprawled across his favorite leather armchair in the library, when something had caught his eye. It was the shiny brass pulls on the desk drawers nearby. He had an idea. He lassoed the book with his tail, hopped out of the chair, and stuffed the book back into place on the bookshelf. On the desk there was a collection of fountain pens, leather-bound boxes, silver boxes, smoking pipes, and stationery. Nothing can look out of place, he reminded himself while his paws itched to touch each one of them.

Henry swung his tail out from under his charcoal-gray body and sat in the desk chair. He ran a forepaw across the smooth walnut-colored wood surface of the desk and noticed that the pens, letter openers, and a crystal bottle filled with blue ink were embossed with the queen’s crown, just like the life-size versions that Her Royal Highness used. Photographs of people stood framed in sterling silver, smiling back at him. It feels like they are watching me, he thought as he clasped a shiny drawer pull and gave it a little tug. The drawer glided halfway out and got stuck. Upon inspection, Henry spied a piece of crumpled paper jammed in the back. Careful not to rip it, he eased it out. Flattened in front of him, he saw several scratchy paw-drawn images connected by lines and dots. Instantly he recognized the Copper Horse and the paved path leading up to it called the Long Walk. He’d seen them a hundred times from the castle’s front windows. There were other things he didn’t recognize, but they had words like Totem Pole and Gardens written next to them. To the left of all of the images, near the ragged edge, Henry noticed a large mysterious .

Henry’s heart thumped faster as he studied the map more closely. It nearly stopped when he spotted some small initials scratched on the lower right corner.

Henry swiftly rolled up the map and wound his tail around it. He slammed the desk drawer shut, leaped out of the chair, and shoved it back in its place. He gave the desk and the room one final inspection, then dashed off to find his best friend.

He’s probably in the castle kitchens, Henry guessed, picturing Jeremy—who was also his distant cousin—nibbling away on crumbs from the queen’s dinner much earlier that night. Henry hopped out of the dollhouse and onto the exhibit room floor. Navigating his way through the castle, he took all the shortcuts he knew, racing through the heating ducts until he reached Lantern Lobby just outside the biggest kitchen of them all. He poked his head out of a grate in the wall to check for Titus, the steely-eyed tabby cat who roamed around as if he owned the place. When Henry was certain that the coast was clear, he hopped out of the grate and darted across the floor toward the kitchen.

Twenty mouse lengths away from the kitchen door he planned to slip under, Henry heard a clack-clack-clacking. It was the unmistakable sound of cat claws on the hard stone floor. Henry crouched, frozen to the spot, not daring to look or twitch a whisker. When he heard the clacking gather speed, he knew Titus had spotted him. Henry held his breath and made a run for it, slipping under the kitchen door just in time, leaving the nasty old fur ball hissing on the other side.

Henry sprang up onto all four paws as fast as he could and sprinted for cover under one of the massive, black iron ovens. He huffed and puffed until he caught his breath, then surveyed the enormous kitchen in search of Jeremy.

The floor was bathed in moonlight that poured through the windows high above. Its gleam bounced off copper pots and kettles that lined the wall shelves and ringed the giant room. The very edges of the kitchen offered safe cover in the shadows cast by ovens, stoves, and worktables.

Henry turned toward the sound and eagerly waved the map for Jeremy to see, but Jeremy had turned away. Sitting in the middle of the open floor, spotlighted by moonglow, Jeremy looked like he didn’t have a care in the world as he nibbled away on some whisker-wetting prize clutched in his oversized paws.

“Jeremy!” Henry yelled. “Look what I found!” He scampered out from cover and stopped to reconsider.

“Come on!” Jeremy was signaling for Henry to join him, but Henry shook his head. He was anxious to show Jeremy the map, but something told him to stay in the shadows.

Henry curled his tail around the map and made his way closer to Jeremy by hugging the wall under the ovens and stoves. When he was midway along, he cocked his ears and fixed his eyes on Jeremy. Something didn’t feel right. “Jeremy,” he shouted, but it was no use. Jeremy zigged and zagged back and forth across the floor following his nose in search of more crumbs. Henry shook his head, then all of a sudden, with no warning at all, the entire kitchen was flooded with bright fluorescent light.

Two cooks wearing white aprons, black-and-white checkered pants, and dark rubber-soled clogs marched in carrying cases that reminded Henry of suitcases from the dollhouse, just a whole lot bigger. Henry’s heart leaped into his throat. He looked back and forth between the cooks and Jeremy, who had tucked himself into a tight ball below a table, just a few tail lengths away from one of the cook’s feet. In the middle of the kitchen, there was nowhere to run without being seen. No wall to hug. No vent to hop into. No drain to duck down. No stove or refrigerator to hide under. Henry could hardly breathe. Look at me, look at me, he willed Jeremy, but at that very moment the black clog shifted and kicked Jeremy.

Jeremy shot out from under the table. The lady cook screeched and dropped her case, which crashed to the floor. An assortment of shiny, sharp kitchen knives—large and small—sprayed into the air and showered down all around Jeremy. He stopped still in his tracks.

Henry jumped out from under the stove. “Run, Jeremy. Run!”

Henry attempted to back up into the shadows again, but his legs felt heavy and wouldn’t obey. The room began to swirl in front of his eyes as Jeremy stayed glued to the same spot, surrounded by knives.

Thwap! Whop! Whap! The familiar sound of a broom came close to Henry’s head, blowing his whiskers back. Jeremy sprang in and out of Henry’s view as he scampered, hopped, and skittered away from the attacking broom.

Henry’s pulse pumped through his paws and pounded in his ears. Too stunned to move, he watched the lady cook lower a large metal mixing bowl over him. It all happened so fast, and yet it felt like slow motion. CLANG! The metal echoed as it hit the hard stone floor. Everything went dark except a thin ring of light that peeked under the rim.
Gigi Priebe

Gigi Priebe is the mother of three, the founder of Stepping Stones, an award-winning children’s museum in Norwalk, Connecticut and the author of The Adventures of Henry Whiskers, the first in her middle grade series. When she is not writing¾or rewriting¾she is a philanthropic advisor and community volunteer in Fairfield County, Connecticut, where she lives with her husband, a cat named Tigger, a dog named Clover, and probably some mice.

Daniel Duncan is an illustrator living in the UK who creates most of his work in an old stable turned studio. His work takes inspiration from cinema, old photos, and sports. Duncan graduated from Middlesex University with First Class Honours, and a bachelor’s degree in illustration. He was highly commended by Macmillan for the 2013 Children’s Book Competition, as well as being shortlisted for the 2014 AOI awards for the Children’s Books New Talent category.

More books in this series: The Adventures of Henry Whiskers