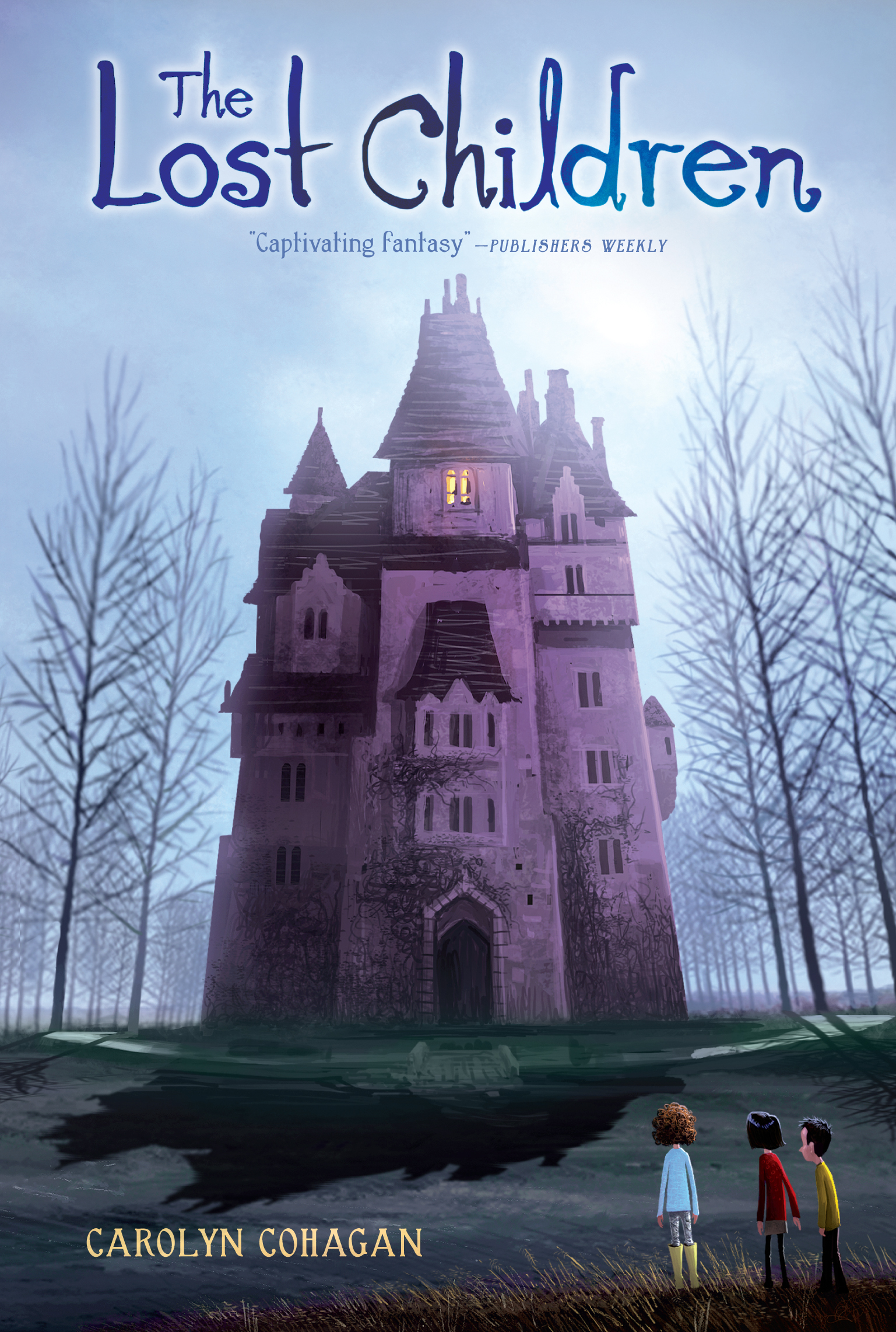 Twelve-year-old Josephine Russing lives alone with her father. Mr. Russing is a distant, cold man best known for his insistence that every member of their town wear gloves at all times, just as he does--even at home--and just as he forces his daughter to do as well. Then one day Josephine meets a boy named Fargus. But when she tries to follow him, he mysteriously disappears and Josephine finds herself in another world called Gulm. Gulm is ruled by the "Master," a terrifying villain who has taken all the children of Gulm. With Fargus by her side, and joined by Fargus's friend Ida, Josephine must try to find her way home. As the trio attempt to evade the Master, they encounter numerous adventures and discover the surprising truth about the land of Gulm, and Josephine's own life back home.

The Lost Children ONE
Josephine Russing owned 387 pairs of gloves. She had them in wool and cotton and silk. She had them in plaid and paisley and print. She even had a pair that had been made from the fur of an albino sloth.

Josephine, her gloves, and her father, Leopold Russing, lived in a big empty farmhouse miles and miles away from the nearest neighbor or trading post. Josephine had no friends to speak of, but even if she had, she would never have invited them to visit her home. Other children might expect her father to say hello, to ask their names, or to serve them iced lemonade. And when he didn’t, they might learn Josephine’s most horrible, most shameful, most unspoken secret.

Her father ignored her completely.

Mr. Russing skulked around their house in silence, reading, cooking meals, or washing clothes, occasionally glancing at Josephine as if she were a neighbor’s cat who’d sneaked in the window. Since her mother had died, Josephine’s only indication that her father remembered she existed was that each week he brought her a new pair of gloves. He never said anything about them, or acknowledged when she wore them, but every Friday evening when Josephine checked her chest of drawers, there would be a brand-new pair of gloves inside. Josephine would have preferred a conversation or the occasional “How was school today?” but she wore the gloves dutifully, accepting each new pair as some minute sign that her father actually cared for her.

But it was hard to believe that Mr. Russing cared for anything. He was an imposing presence, tall with salt-and-pepper hair that he slicked back, exposing an intimidating widow’s peak. His brown eyes were inscrutable and never seemed to rest on anything for long. Josephine was fairly certain he couldn’t name her eye color (amber) or her age (twelve). He wore expensive suits that were always perfectly pressed, along with his own special pair of gray silk gloves.

He was extremely unpopular in the town, and it wasn’t just because he was strangely quiet and wore the expression of someone who’d just smelled sour milk. People hated him because he was responsible for the most outrageous law ever to be passed in the town’s history: Every citizen was required to wear gloves at all times.

This might be fine if one was a banker or an accountant or something of that sort, but imagine what it was like for the farmers and carpenters and bakers, who worked with their hands. They hated the law, but if they were caught not wearing gloves, they were fined.

How did this silly law get passed in the first place? It happened one night many years ago when Mr. Russing was in the middle of a heated game of five-card stud with the city mayor. Mayor Supton had four jacks and was feeling a bit cocky. But Leo Russing had a straight flush, and when he won, he decided to forgo his monetary winnings and demand that the mayor pass a new law on his behalf. The mayor quickly acquiesced, happy to escape with his wallet intact.

Mr. Russing was the only man who manufactured gloves in the town, so one can imagine how much this law improved his business. He had three factories lined up in a row like ducks—that is to say, they were actually shaped like ducks (Josephine’s father had bought the buildings from a man in the bathtub toy business who was down on his luck). In one building the gloves were designed. In another they were cut and pinned. And in the third they were sewn, by hand, by women who’d been shipped over from an island across the ocean and who didn’t mind sewing gloves . . . while wearing gloves.

He was the wealthiest man in town. And people hated him, for his money and for his stupid law. And the children hated Josephine. As they sat in the classroom, hands sweating and itching from their gloves, they would glare at her and whisper mean things. But she was too shy to defend herself, to try to explain that she had nothing to do with the gloves and that she hated wearing them too.

Josephine barely remembered her mother, and the recollection was less of a picture and more of a sensation, an ethereal feeling that Josephine couldn’t pinpoint but that most children know very well. It was a sense of safety and love. For Josephine this feeling was elusive, as if she were sopping wet and couldn’t remember what it was to be dry.

Surprisingly, the vision from her early childhood that haunted Josephine the most was not of her mother, but of her father. She could recollect him standing on the front lawn, his hair a rich brown, smiling and waving to her mother inside the house. He was, as always, wearing a crisp suit and the gray gloves, but he was smiling and—Josephine was just sure of it—he was happy. It was very difficult to reconcile the joyful man on the lawn with the father she now lived with. But she clung to the memory desperately, only letting it out at night when she could sink into it like a warm duvet.

Josephine had always gone to school of her own accord. Her father didn’t notice if she went or not, which many children might imagine as an ideal situation, but not Josephine. She loved books. And school was the only place where she could get her hands on more, so she attended regularly and worked diligently. She felt confident when she was reading. She imagined that because she was able to admire and understand the characters in the stories, the characters (had they been real) would have liked and understood her in return. Sometimes when she neared the end of a story, she would force herself to read very, very slowly, because she dreaded the moment when it was all over, when she would have to look up and remember her own dull life. So she always read the last paragraph twice before turning the page, detesting that brutally blank final sheet.

Josephine had a delicate heart-shaped face, a button nose, and long eyelashes that made her eyes wide and bright. Not that anyone saw her eyes, since she always walked around with a curly mop of hair obscuring her face. She was lean and gangly, and she hated her spindly legs.

While the children would have nothing to do with Josephine, she intrigued the schoolteacher, Ms. Kirdle. Josephine possessed an almost frightening ability to remember lectures word for word, and unlike the other children, Josephine never talked to her neighbors, or giggled when Ms. Kirdle’s new shoes squeaked, or pointed if she saw a dog out the window. She always sat still and captivated at the back of the classroom, chewing on her frizzy locks.

And she got perfect marks.

Ms. Kirdle, a kind woman with mannish eyebrows, worried about Josephine’s apparent lack of friends. When she told the children to form groups, no one wanted to include Josephine. Ms. Kirdle only had to look down at her own gloved hands to understand their resentment, but she still thought they were being unfair. She sometimes managed to slip Josephine extra books when no one was watching.

Every afternoon school ended with Ms. Kirdle reading aloud from a story, and this was Josephine’s favorite part of the day. She would close her eyes and listen to Ms. Kirdle’s dulcet voice, temporarily forgetting that eventually she would have to gather her books and papers and return to her unbearably quiet house.

But that callous bell would always ring, jolting Josephine out of her reverie, and the room would fill with the sharp scratchings of chairs on the wood floor as the other children hurried to escape. And Josephine would watch out the window as mothers came to gather their broods, retie unlaced shoes, and patiently listen to the ceaseless list of wonders and complaints that school always produced. Only after the other children and mothers had walked away would Josephine leave the building. She preferred not to hear the whispering her presence seemed to provoke among adults.

This was Josephine’s life—school, books, and a weekly pair of new gloves—until one spring day when a small boy named Fargus arrived in her garden. 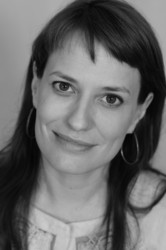 Carolyn Cohagan grew up in Austin, Texas, and has an extensive theater background. She has performed stand-up and one-woman shows at festivals around the world including Edinburgh, Edmonton and Adelaide. She is an advocate for literacy among young readers, volunteering with the non-profit organization Reading to Kids.  She currently lives in Los Angeles, California, and The Lost Children is her first novel.