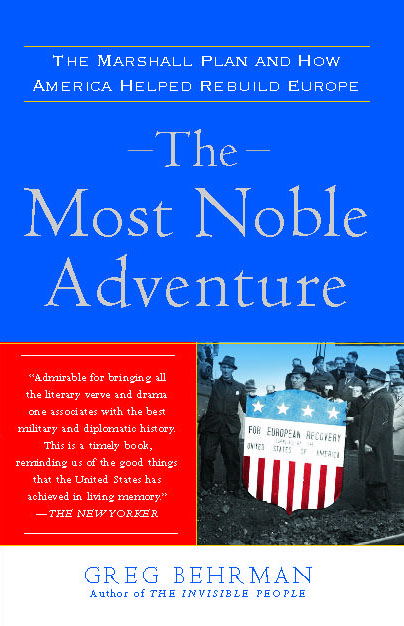 The Most Noble Adventure

The Marshall Plan and the Time When America Helped Save Europe

By Greg Behrman
LIST PRICE $21.99
PRICE MAY VARY BY RETAILER

In this landmark, character-driven history, Greg Behrman tells the story of the Marshall Plan, the unprecedented and audacious policy through which America helped rebuild World War II-ravaged Western Europe. With nuanced, vivid prose, Behrman recreates the story of a unique American enterprise that was at once strategic, altruistic and stunningly effective, and of a time when America stood as a beacon of generosity and moral leadership.

When World War II ended in Europe, the continent lay in tatters. Tens of millions of people had been killed. Ancient cities had been demolished. The economic, financial and commercial foundations of Europe were in shambles. Western Europe's Communist parties -- feeding off people's want and despair -- were flourishing as, to the east, Stalin's Soviet Union emerged as the sole superpower on the continent.

The Marshall Plan was a four-year, $13 billion (more than $100 billion in today's dollars) plan to provide assistance for Europe's economic recovery. More than an aid program, it sought to modernize Western Europe's economies and launch them on a path to prosperity and integration; to restore Western Europe's faith in democracy and capitalism; to enmesh the region firmly in a Western economic association and eventually a military alliance. It was the linchpin of America's strategy to meet the Soviet threat. It helped to trigger the Cold War and, eventually, to win it.

Through detailed and exhaustive research, Behrman brings this vital and dramatic epoch to life and animates the personalities that shaped it. The narrative follows the six extraordinary American statesmen -- George Marshall, Will Clayton, Arthur Vandenberg, Richard Bissell, Paul Hoffman and W. Averell Harriman -- who devised and implemented the Plan, as well as some of the century's most important personalities -- Winston Churchill, Josef Stalin, Joseph McCarthy -- who are also central players in the drama told here.

More than a humanitarian endeavor, the Marshall Plan was one of the most effective foreign policies in all of American history, in large part because, as Behrman writes, it was born and executed in a time when American "foreign policy was defined by its national interests and the very best of ideals." 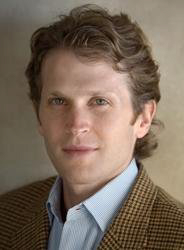 Greg Behrman is the Henry Kissinger Fellow for Foreign Policy at The Aspen Institute. He is the author of The Invisible People: How the U.S. Has Slept Trough the Global AIDS Pandemic, The Greatest Humanitarian Catastrophe of Our Time (Free Press; June 2004). The New York Times called the book, "[w]ell researched and unsparing," and an "important volume." The Baltimore Sun lauded the "eloquent history" as "[m]arvelous." The Washington Post Book World suggested that it was "[a]head of its time."

All of the proceeds from his first book were donated to Heartbeat, a South African-based not-for-profit that provides care for AIDS orphans. Behrman is on Heartbeat's Board of Directors. He was also the Coordinator for the Council on Foreign Relations Roundtable on Improving U.S. Global AIDS Policy.

Behrman has moderated Roundtable events with leading policy makers and experts and has been the featured speaker at The Council on Foreign Relations (Washington D.C.), The Asia Society (NY), The Commonwealth Club of California (San Francisco), The Foreign Policy Association (NY), Harvard, Yale, Princeton and dozens of other venues. He has appeared on NBC, PBS, C-SPAN, CNN, Fox News, CNBC and National Pubic Radio (NPR). His writing has appeared in Newsweek International, Los Angeles Times and International Herald Tribune.

Behrman has held a world record in fly-fishing and has completed the New York City Marathon. An avid mountaineer, he has summitted Mt. Kilimanjaro and Mt. Elbrus, in Africa and Russia, respectively. He is a member of The Explorer's Club in New York City, where he also resides.

"The Marshall Plan was the most creative and inspired act in modern American foreign policy. It preserved the possibility of freedom and showed the potential for great leadership. There's so much we can learn from the boldness and creativity of Marshall, Acheson and their coterie. Greg Behrman has captured all of this masterfully. In a beautifully researched and written narrative, he has produced a compelling tale that should be an inspiration as we face our new global challenges."

-- Walter Isaacson, coauthor of The Wise Men and author of Einstein

Every time our nation faces a crisis, someone calls for a new Marshall Plan. But few know the real story of the original: thrilling, inspirational and relevant to the challenges of today. No one has ever told it better than Greg Behrman, who draws modern lessons while making this vital period come alive once again."

"The Marshall Plan is an often-invoked but not well-understood icon of American politics. Greg Behrman turns it into a living, vivid -- and moving -- story. He captures the dangers and drama of the years after World War II. He shows how personalities -- whom afterwards history would rightly judge statesmen -- combined vision and pragmatism with determination, money and self-help to prevent Europe from falling into the arms of Josef Stalin, while laying the basis for a united Europe."

-- Daniel Yergin, author of The Prize and Shattered Peace

"Behrman's comprehensively researched and well-written history of the Marshall Plan -- that, as much as the Allied victory, saved Europe as we know it -- promises to be a definitive work."

"A commanding and measured account of one of the most visionary programs in United States history. If you wish to know America at its best, what America can be, read this book."

-- Bob Kerrey, president of The New School and former senator

"As historian Greg Behrman makes abundantly clear in The Most Noble Adventure, the Marshall Plan has become code language for governmental caring. By reminding us of President Truman's great accomplishment in vivid detail, Behrman has rendered history a signal service. A smart, balanced and timely study."

"There is much for our times to learn from the Marshall Plan -- about what common purpose can achieve and how cooperation among nations, even in dangerous times and midst high tension, can bring such great common benefit."

-- Daniel Yergin, author of The Prize

The Most Noble Adventure

The Marshall Plan and the Time When America Helped Save Europe

By Greg Behrman
LIST PRICE $21.99
PRICE MAY VARY BY RETAILER