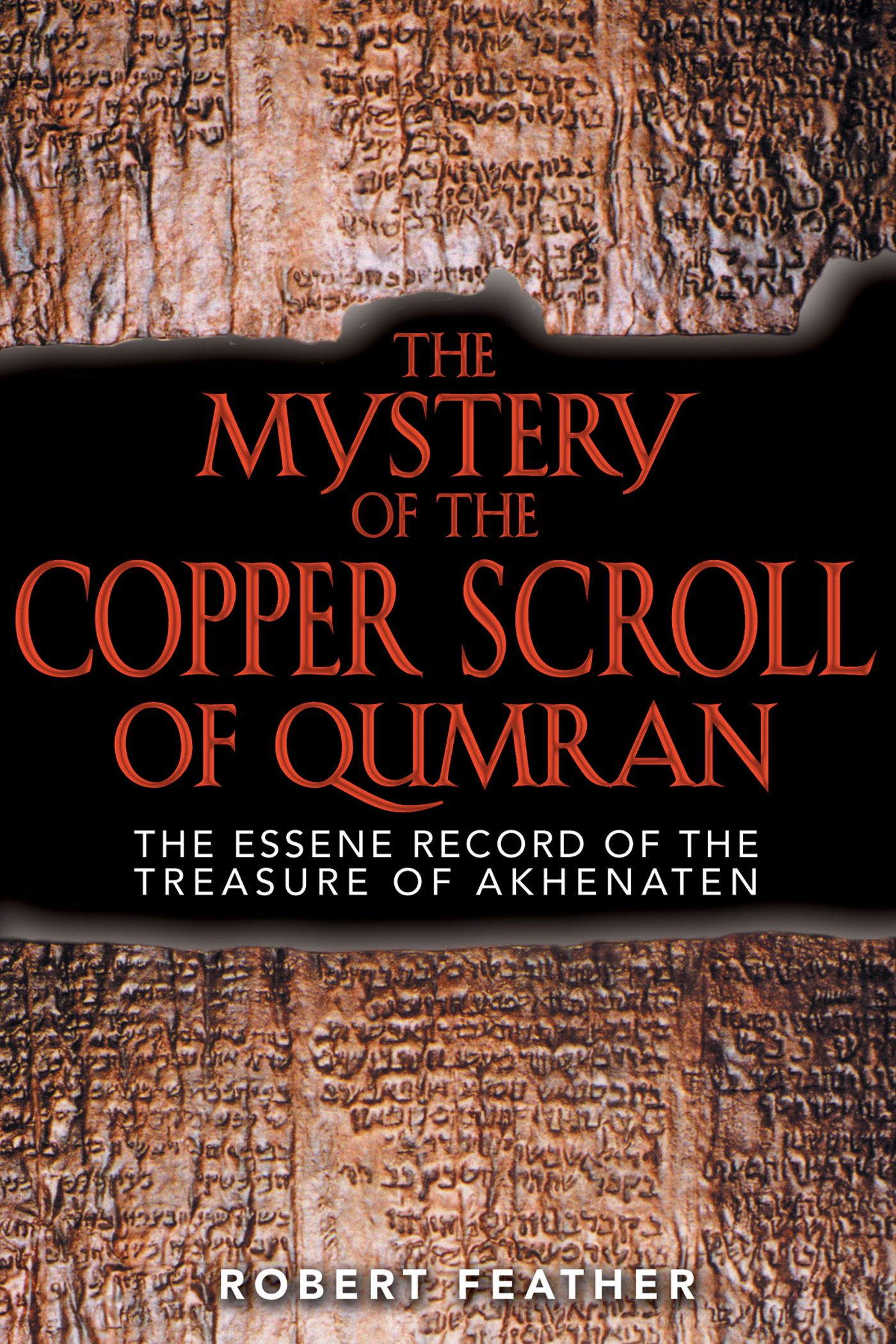 The Essene Record of the Treasure of Akhenaten

Introduces a radical new perspective on the historical foundations of monotheism, based on the enigma of the Copper Scroll of the Essenes.

• Confirms the link between ancient Judaism and the pharoah Akhenaten.

• Decodes the system of measurements encrypted on the Copper Scroll that has confounded scholars for over 50 years, leading to the identification of fabulous lost treasures.

• Points to a radical new understanding of the origins of monotheism.

The famous Dead Sea Scrolls comprise the oldest collection of Biblical documents ever discovered. Of the Dead Sea Scrolls, none has baffled experts more than the 2,000-year-old Copper Scroll, discovered in 1952 by a team of Bedouin led by Henri de Contenson of the Ecole Biblique in East Jerusalem. Appearing to be a list of buried treasure engraved on copper pieces, the Copper Scroll is considered to be the work of a secretive Jewish sect of devout Essenes, who lived by the Dead Sea around the time of Jesus. No one has been able to explain its meaning or discover any of the 64 locations where the Biblical treasures it lists were buried.

Robert Feather, combining his background as a metallurgist with his journalistic expertise, has unraveled the enigma of the Copper Scroll in a fascinating study that takes the reader on a journey from ancient Mesopotamia, through Canaan, into Egypt, and back to the shores of the Dead Sea. His exploration links the scroll to the ancient Egyptian king Akhenaten, confirming a long suspected influence of this pharaoh's religious beliefs on those of the Hebrews. The author's findings not only reveal the locations of most of the treasures listed on the Copper Scroll, but they also point to a radical new understanding of the origins of monotheism--the basis of the three great religions of Judaism, Islam, and Christianity.

Chapter One
The Copper Scroll--Two Thousand Years In Hiding

Three-and-a-half hours of bumping across the rolling sandy hills of the Judaean Desert is not the easiest way to approach Qumran from Jerusalem. Passing picture-book monasteries in a bleak landscape dotted with rock-strewn mounds and occasional makeshift shelters, you see scenery that has not changed for thousands of years. Stopping on a high point of Mount Muntar to view the pastel shades of Mar Saba Monastery; you turn to find two small, dusky, Arab children and a donkey, who have appeared from nowhere to beg alms and stare wide-eyed at these invaders of their lonely land. When your open truck finally shudders to a halt, perched high on a cliff overlooking the Dead Sea, the heat is oppressive, your back is aching, and you wonder if it was really all worthwhile. The breath-taking view that meets your eyes soon dispels all doubts! (see Plate 1.)
Below lies a vast beige-hued, flat coastal plain, cut by a dark strip of road, and patched by green rectangles of cultivation, sparse outcrops of boulders and scraggy trees. Beyond, in the far distance, you can almost taste the salty indigo thickness of the Dead Sea as it merges from violets and mauves into soft blue skies.
Here is where my story begins, and where I saw for the first time the ruins left by a mysterious lost 'community' of pious, frugal, religious ascetics--the 'Qumran-Esseries'--who lived on the shores of the Dead Sea in the Biblical land of Judaea. The famous Dead Sea Scrolls, concealed in caves overlooking the Dead Sea, comprise the oldest collection of Biblical documents ever diseovered.1 Documents of immense importance to biblical scholars, and with profound implications for all the major western religions.
It was the start of a journey of enquiry that would take me back to the time when many of the Scrolls were written down and copied out--the era of Jesus. Back a further 1,500 years to the time of Abraham and Sarah and their encounter with an Egyptian pharaoh, to the time of Jacob and Joseph and their meeting with the most enigmatic of pharaohs, and to the time of Moses, Prince of Egypt, as he led his people to the promised land of Canaan.
As I scrambled about the rock-strewn wadis and rolling foothills behind Qumran, my guide, Avner Goren, pointed out two low-lying caves, one of which he referred to as 'Cave 3', where the Copper Scroll of the Essenes had been found back in 1952. I had read about this strange artefact, but now saw for the first time the place where the Qumran-Essenes had hidden perhaps their most precious of scrolls, some 2,000 years earlier.
As a metallurgist, with a Jewish background and knowledge of Hebrew, I found the Copper Scroll of special interest and was, quite naturally, intrigued by the unusual use of this material as a means of record. Even more tantalizing was the fact that this scroll contains a list of hidden treasure, none of which had previously been found. Conventional translations of the Copper Scroll seemed to me to give totally unrealistic numerical values and weights relating to the treasure, contrary to all my knowledge of metallurgy and experience in the refining of precious metals. So I began to question these traditional interpretations.
I had studied metallurgy at university, almost as a random choice. Several of us at Marylebone Grammar School had decided to go to London University simply because we were friends, and I spent many happy hours in the warm basement of Sir John Cass College trying to extract metals from their ores, or purifying gold by scorification.2 I eventually qualified as a professional metallurgist and subsequently became a Chartered Engineer, working initially on the refining and assaying of precious metals, and later for the then British Iron and Steel Corporation. When the call of clattering typewriter keys called me to journalism, I joined Steel Times as Assistant Editor, and then edited The British Founciryman. Later I launched a journal for the Institution of Metallurgists, and a magazine on metrology.3

CRACKING THE CODE OF THE COPPER SCROLL
At this stage in my researches I went back to the original source--to the Copper Scroll itself--to reconsider the mixture of Egyptian and ancient Hebrew exhibited in it. I came to the intriguing possibility that the Copper Scroll refers to both Israeli and Egyptian locations. Having isolated the most likely general areas for the treasures of Akhenaten to be found, 1 started to home in on more exact locations, with the help of the Copper Scroll.
Going back to the scroll, I needed to address a number of questions before I could make more progress:

• Does the scroll contain some kind of code that, once solved, will lead to the treasures it describes?
• Were the Qumran-Essenes prone to writing in code?
• If so, are any other Dead Sea Scrolls written in code?

The answer to all these proved to be 'yes'.
When referring to their own Community, the Qumran-Essenes often used cryptic codes, mirror writing and hidden messages within their own texts.
Looking at several examples of other Dead Sea Scrolls, it became immediately obvious that the Qumran-Essenes had a fondness for codes, and this predilection gave me an insight into the quirky minds of these hermit-like people. More importantly, it unambiguously showed the scribes to be familiar with Egyptian symbols in use between 1500 and 1200 B.C.E., a period comfortably encompassing the reign of Pharaoh Akhenaten.
Robert Feather

Robert Feather is a metallurgist, engineer, journalist, and scholar of world religions. He is the founding editor of The Metallurgist, editor of Weighing and Measuring, and the author of The Mystery of the Copper Scroll of Qumran and The Secret Initiation of Jesus at Qumran. He lives in London.

“Robert Feather has been able to uncover the first link between Akhenaten and the Qumran community, through the Copper Scroll. This new evidence will completely change our understanding of the relationship between biblical Moses and historical Akhenaten.”

“Empowered with technical expertise and tenacious research, Robert Feather stimulates excited debate with The Mystery of the Copper Scroll of Qumran.”

The Essene Record of the Treasure of Akhenaten