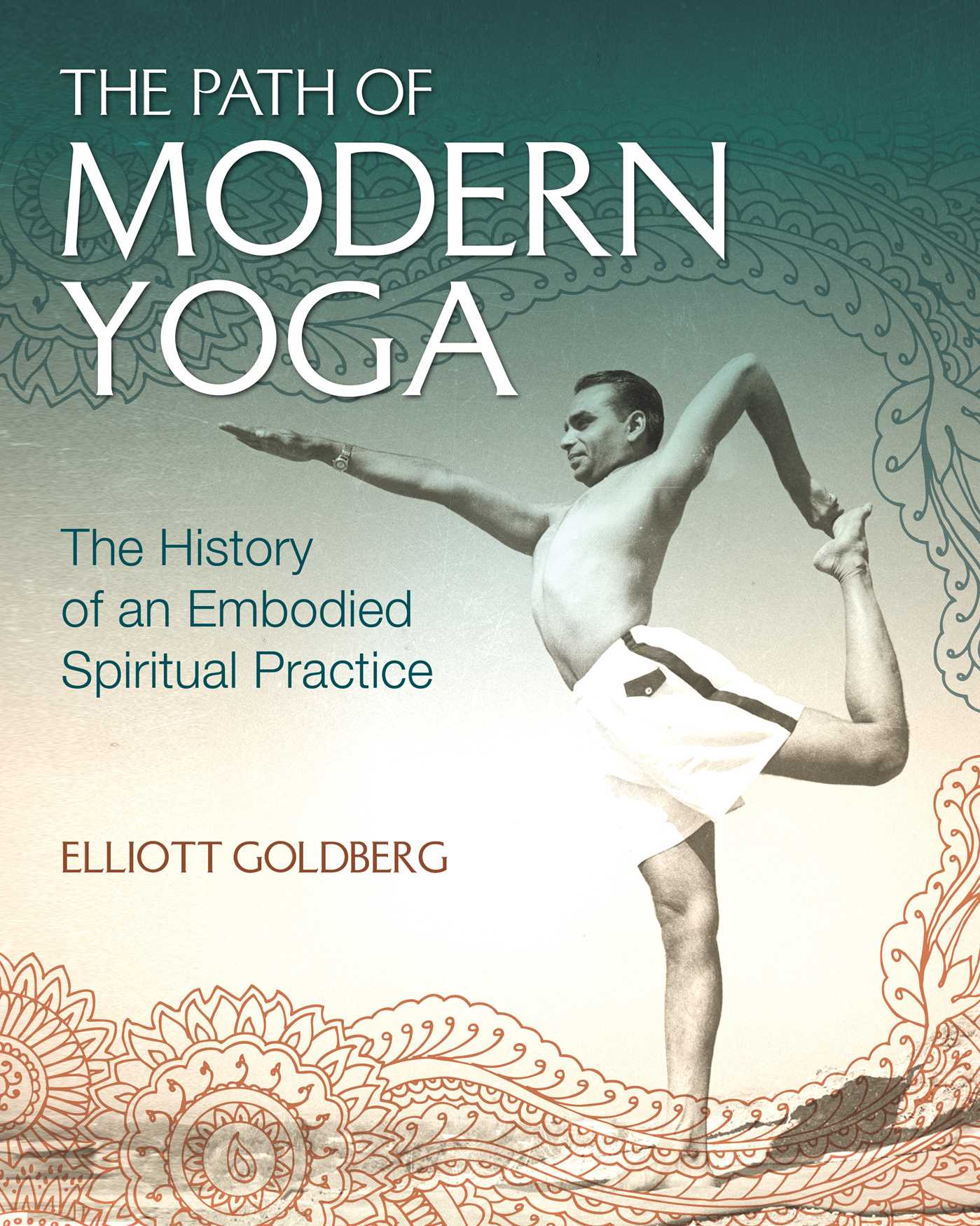 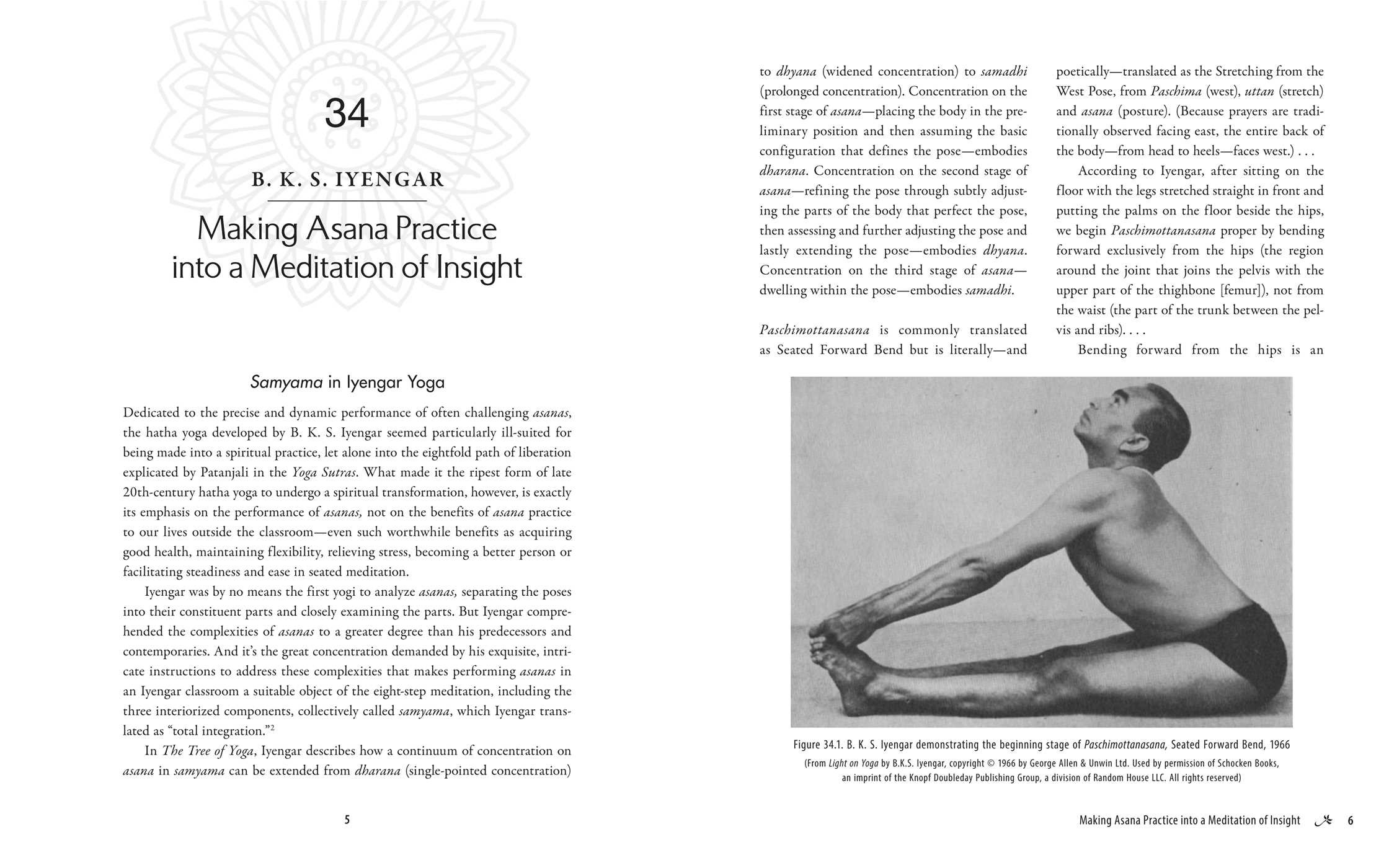 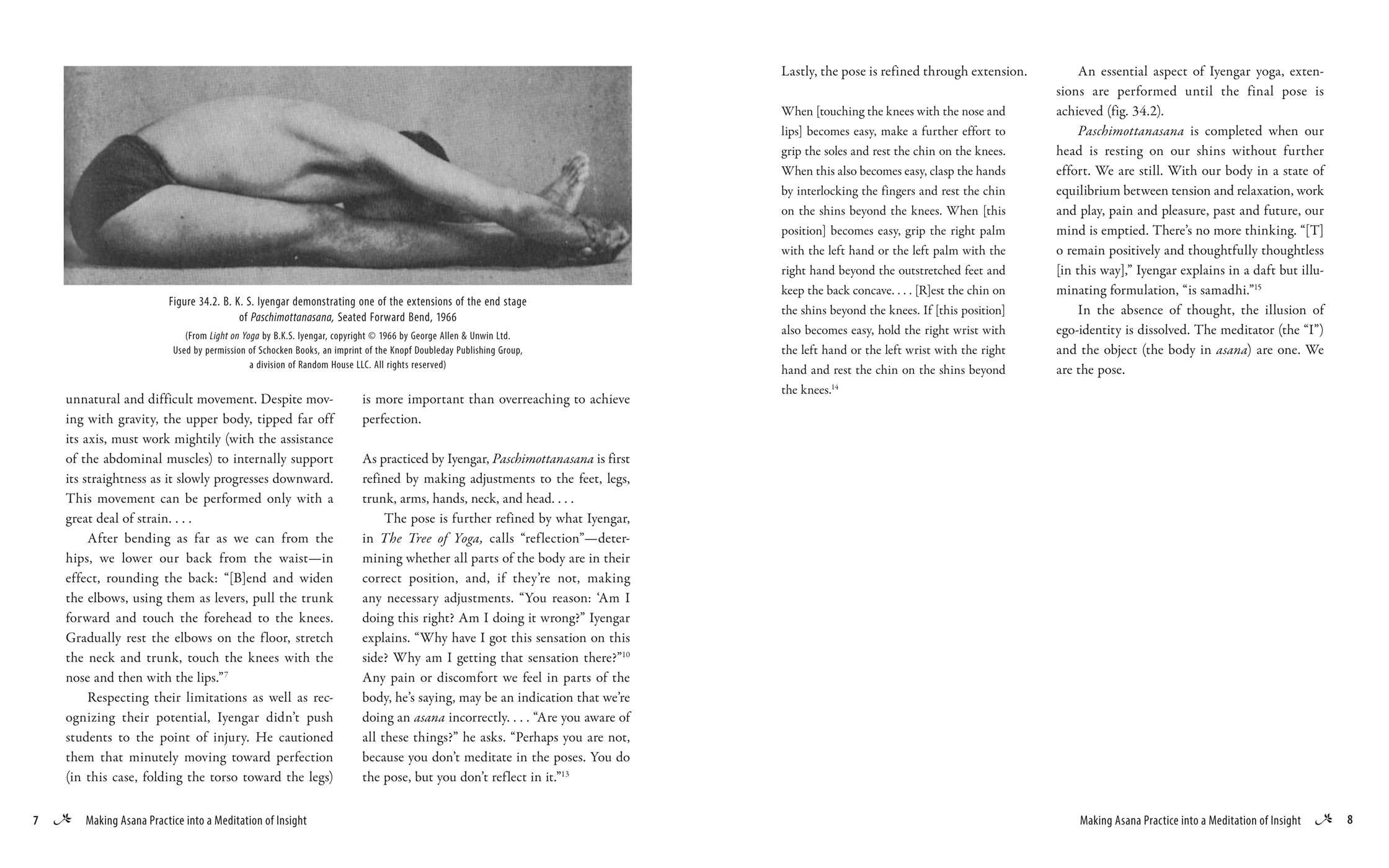 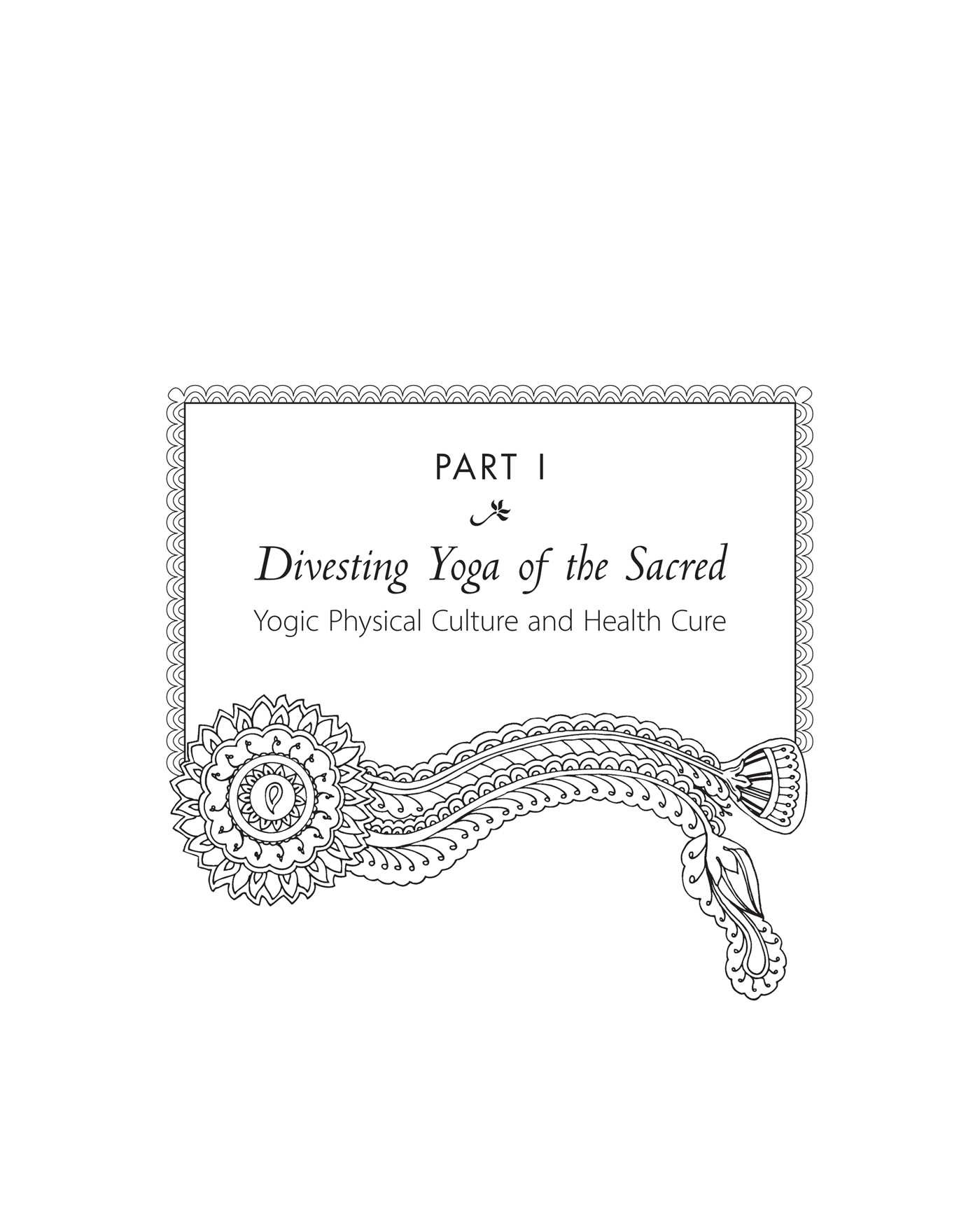 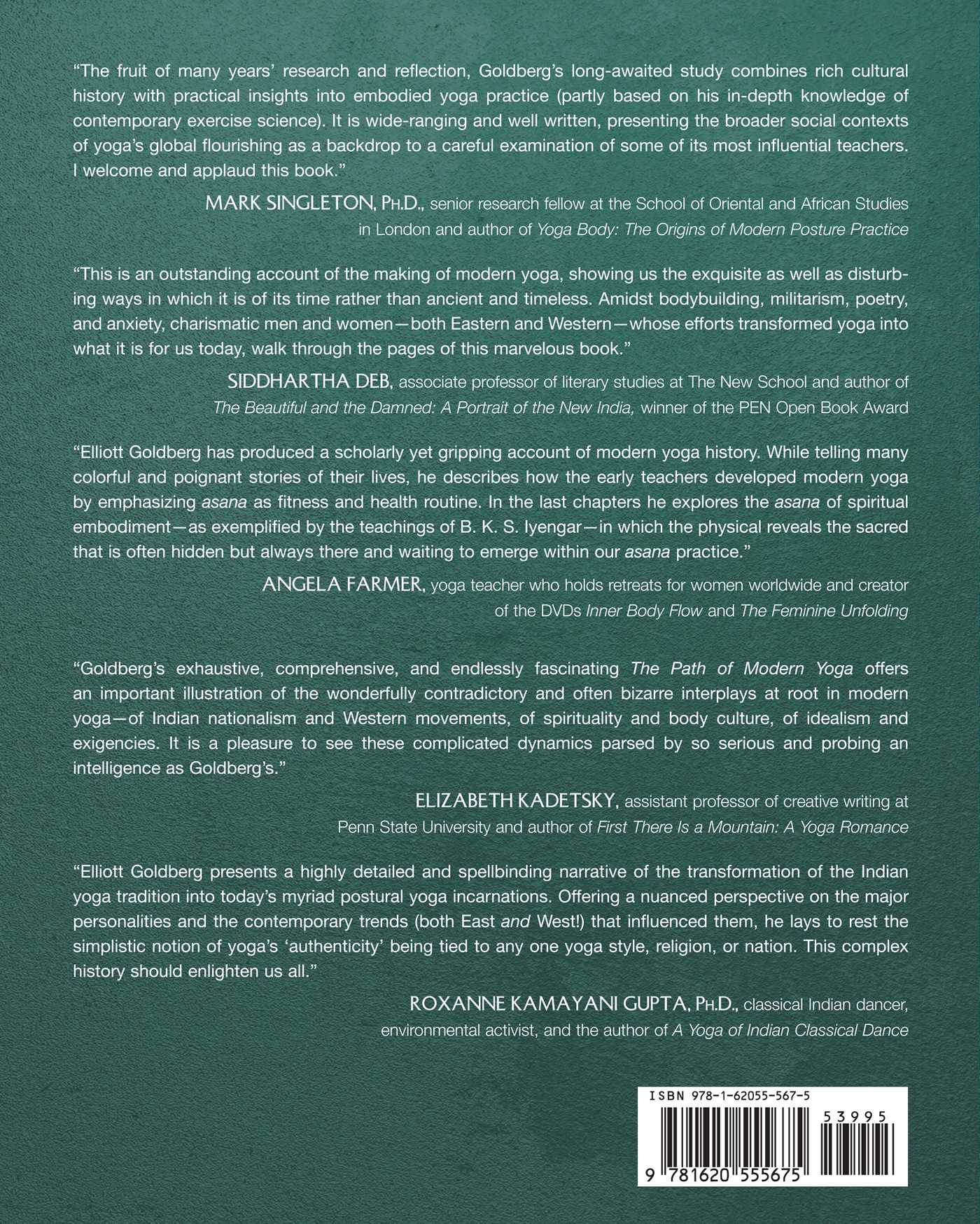 The Path of Modern Yoga

The History of an Embodied Spiritual Practice

In The Path of Modern Yoga, Elliott Goldberg shows how yoga was transformed from a sacred practice into a health and fitness regime for middle-class Indians in the early 20th century and then gradually transformed over the course of the 20th century into an embodied spiritual practice--a yoga for our times.

In chronicling how the transformation of yoga from sacred discipline to exercise program allowed for the creation of an embodied spiritual practice, Goldberg presents an original, authoritative, provocative, and illuminating interpretation of the history of modern yoga.

Making Asana Practice into a Meditation of Insight

Dedicated to the precise and dynamic performance of often challenging asanas, the hatha yoga developed by B. K. S. Iyengar seemed particularly ill-suited for being made into a spiritual practice, let alone into the eightfold path of liberation explicated by Patanjali in the Yoga Sutras. What made it the ripest form of late 20th-century hatha yoga to undergo a spiritual transformation, however, is exactly its emphasis on the performance of asanas, not on the benefits of asana practice to our lives outside the classroom--even such worthwhile benefits as acquiring good health, maintaining flexibility, relieving stress, becoming a better person or facilitating steadiness and ease in seated meditation.

Iyengar was by no means the first yogi to analyze asanas, separating the poses into their constituent parts and closely examining the parts. But Iyengar comprehended the complexities of asanas to a greater degree than his predecessors and contemporaries. And it’s the great concentration demanded by his exquisite, intricate instructions to address these complexities that makes performing asanas in an Iyengar classroom a suitable object of the eight-step meditation, including the three interiorized components, collectively called samyama, which Iyengar translated as “total integration.”

Paschimottanasana is commonly translated as Seated Forward Bend but is literally--and poetically--translated as the Stretching from the West Pose, from Paschima (west), uttan (stretch) and asana (posture). (Because prayers are traditionally observed facing east, the entire back of the body--from head to heels--faces west.) . . .

According to Iyengar, after sitting on the floor with the legs stretched straight in front and putting the palms on the floor beside the hips, we begin Paschimottanasana proper by bending forward exclusively from the hips (the region around the joint that joins the pelvis with the upper part of the thighbone [femur]), not from the waist (the part of the trunk between the pelvis and ribs). . . .

Bending forward from the hips is an unnatural and difficult movement. Despite moving with gravity, the upper body, tipped far off its axis, must work mightily (with the assistance of the abdominal muscles) to internally support its straightness as it slowly progresses downward. This movement can be performed only with a great deal of strain. . . .

After bending as far as we can from the hips, we lower our back from the waist--in effect, rounding the back: “[B]end and widen the elbows, using them as levers, pull the trunk forward and touch the forehead to the knees. Gradually rest the elbows on the floor, stretch the neck and trunk, touch the knees with the nose and then with the lips.”

Respecting their limitations as well as recognizing their potential, Iyengar didn’t push students to the point of injury. He cautioned them that minutely moving toward perfection (in this case, folding the torso toward the legs) is more important than overreaching to achieve perfection.

As practiced by Iyengar, Paschimottanasana is first refined by making adjustments to the feet, legs, trunk, arms, hands, neck, and head. . . .

The pose is further refined by what Iyengar, in The Tree of Yoga, calls “reflection”--determining whether all parts of the body are in their correct position, and, if they’re not, making any necessary adjustments. “You reason: ‘Am I doing this right? Am I doing it wrong?” Iyengar explains. “Why have I got this sensation on this side? Why am I getting that sensation there?” Any pain or discomfort we feel in parts of the body, he’s saying, may be an indication that we’re doing an asana incorrectly. . . . “Are you aware of all these things?” he asks. “Perhaps you are not, because you don’t meditate in the poses. You do the pose, but you don’t reflect in it.”

Lastly, the pose is refined through extension.

An essential aspect of Iyengar yoga, extensions are performed until the final pose is achieved.

Paschimottanasana is completed when our head is resting on our shins without further effort. We are still. With our body in a state of equilibrium between tension and relaxation, work and play, pain and pleasure, past and future, our mind is emptied. There’s no more thinking. “[T] o remain positively and thoughtfully thoughtless [in this way],” Iyengar explains in a daft but illuminating formulation, “is samadhi.”

In the absence of thought, the illusion of ego-identity is dissolved. The meditator (the “I”) and the object (the body in asana) are one. We are the pose.
Elliott Goldberg

Elliott Goldberg is one of the few scholars in the emerging field of modern yoga studies. He has presented papers at the Modern Yoga Workshop at Cambridge University and at the American Academy of Religion (AAR). He lives in New Jersey.

“The fruit of many years’ research and reflection, Goldberg’s long-awaited study combines rich cultural history with practical insights into embodied yoga practice (partly based on his in-depth knowledge of contemporary exercise science). It is wide-ranging and well written, presenting the broader social contexts of yoga’s global flourishing as a backdrop to a careful examination of some of its most influential teachers. I welcome and applaud this book.”

“This is an outstanding account of the making of modern yoga, showing us the exquisite as well as disturbing ways in which it is of its time rather than ancient and timeless. Amidst bodybuilding, militarism, poetry, and anxiety, charismatic men and women--both Eastern and Western--whose efforts transformed yoga into what it is for us today, walk through the pages of this marvelous book.”

– Siddhartha Deb, author of The Beautiful and the Damned: A Portrait of the New India

“Elliott Goldberg has produced a scholarly yet gripping account of modern yoga history. While telling many colorful and poignant stories of their lives, he describes how the early teachers developed modern yoga by emphasizing asana as fitness and health routine. In the last chapters he explores the asana of spiritual embodiment--as exemplified by the teachings of B. K. S. Iyengar--in which the physical reveals the sacred that is often hidden but always there and waiting to emerge within our asana practice.”

“Goldberg’s exhaustive, comprehensive, and endlessly fascinating The Path of Modern Yoga offers an important illustration of the wonderfully contradictory and often bizarre interplays at root in modern yoga--of Indian nationalism and Western movements, of spirituality and body culture, of idealism and exigencies. It is a pleasure to see these complicated dynamics parsed by so serious and probing an intelligence as Goldberg’s.”

– Elizabeth Kadetsky, author of First There Is a Mountain: A Yoga Romance

“Elliott Goldberg presents a highly detailed and spellbinding narrative of the transformation of the Indian yoga tradition into today’s myriad postural yoga incarnations. Offering a nuanced perspective on the major personalities and the contemporary trends (both East and West!) that influenced them, he lays to rest the simplistic notion of yoga’s ‘authenticity’ being tied to any one yoga style, religion, or nation. This complex history should enlighten us all.”

“This is a detailed, comprehensive, and rich examination of the history of modern yoga, showing clearly--and with new insight--how ‘postural yoga’ is thoroughly enmeshed in the culture of health, fitness, and athletics. Goldberg has provided us with an important perspective on how different aspects of 20th-century ‘body culture’ shaped the practice of asana during the modern yoga renaissance.”

“In The Path of Modern Yoga, Elliott Goldberg has laid out a clear road map--with detours into philosophical musings--of the path of modern yoga from its origins in the early 20th century to its current state of practice in the early 21st century, especially noting the profound influence of my teacher, B. K. S. Iyengar. Although more could’ve been written about the openness and love with which Iyengar gave of himself, if you want to know about yoga and how it got to be what it is today, this is the book to read.”

“This is a deep history of the birth of modern yoga. There is dogged research on and profound insight into the main protagonists. Their contributions are shown to be both unique and tempered by the spirit of the times in the West as well as in India. As a result, this story of modern yoga is equally intimate and expansive. Now we practitioners of yoga can muse over where we really come from.”

– Norman Sjoman, Ph.D., author of The Yoga Tradition of the Mysore Palace

“Goldberg’s ‘detective work’ is impressive. In his investigation into the writings of British journalist Louise Morgan, he has uncovered her critical role in the transformation of the ‘Sun Salutation’ into an ‘Elixir for Women’--a missing link in the development of modern yoga as a practice for women as well as men. Although at times irreverent, The Path of Modern Yoga is filled with wisdom and understanding into the culture and experience of yoga.”

“Combining original historical research with a compelling narrative, The Path of Modern Yoga profiles some of the most significant--and in some cases surprising--personalities to shape modern yoga practice. Goldberg’s reflections and insights will further understanding, both popular and academic, of yoga and its place in the contemporary world.”

– Suzanne Newcombe, Ph.D., author of articles and chapters on the social history of yoga

". . . Goldberg traces yoga’s path from sacred ritual to physical exercise to embodied spiritual practice, yoga practitioners and scholars alike will be fascinated by these yogin pioneers and their colorful stories. Goldberg offers a vibrant and accessible study of yoga’s history, growth, and transformation."

“The Path of Modern Yoga is a celebration of yoga in body, mind, and spirit. This book will especially touch the hearts of readers who love history or love the path of yoga.”

This lovely book traces the history of modern yoga (1920’s-2000’s) through the biographical stories of yoga students as well as the eleven Indian and Western yogis who spearheaded the popularity of yoga as a primary physical practice. An amazing amount of research and detail is effortlessly conveyed through the use of delightful and insightful storytelling of the lives of these fascinating yoga pioneers.

The Path of Modern Yoga is an in-depth treatment of yoga with focus on some of the key figures who have shaped it. It is an interesting and scholarly approach to a well-researched topic that many yogis might have wondered about. It shows how postural yoga has become part of health and wellness culture today.

The Path of Modern Yoga

The History of an Embodied Spiritual Practice