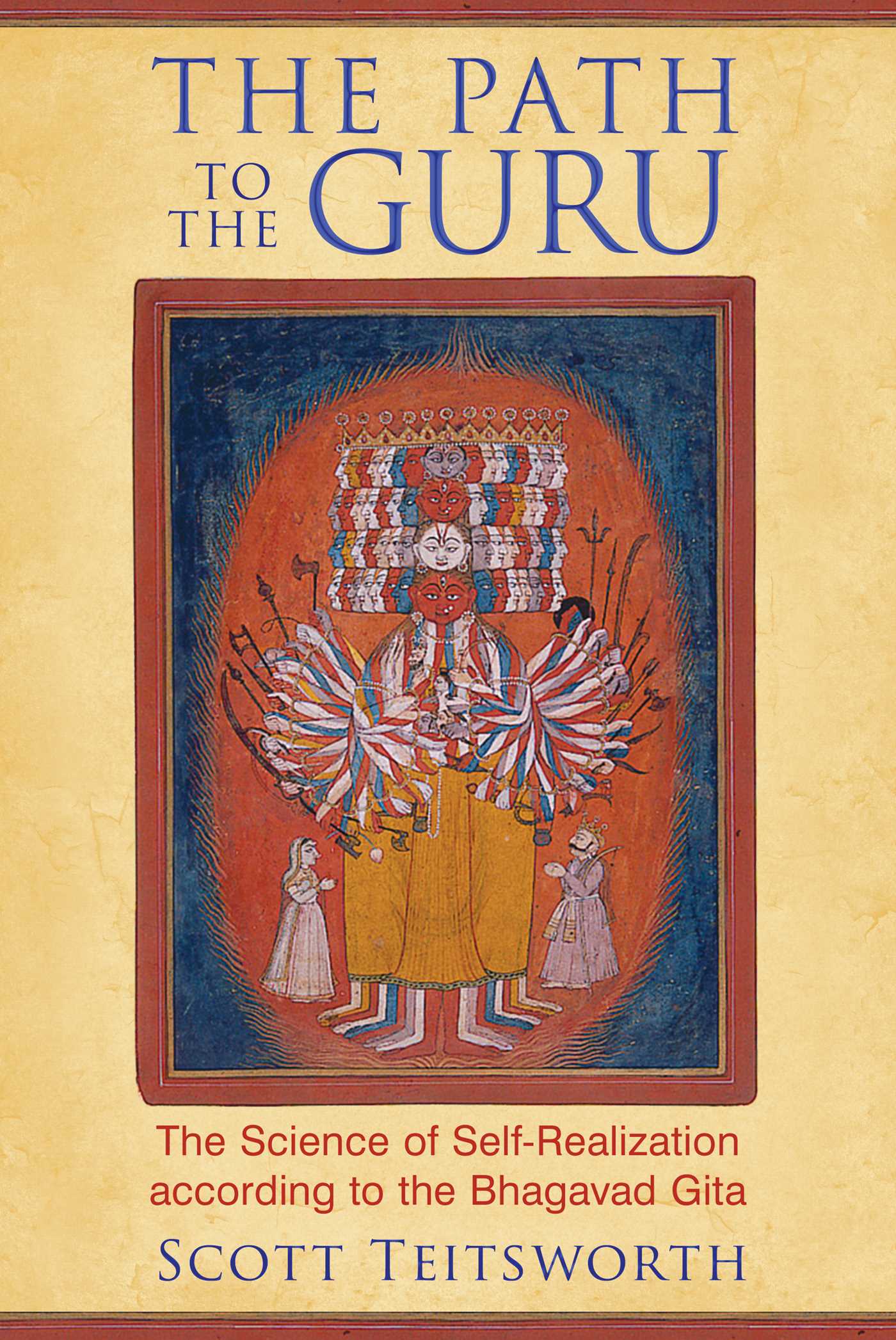 The Path to the Guru

The Science of Self-Realization according to the Bhagavad Gita

• Shows how the Gita prepares you to work with a guru, advocating authenticity and skepticism rather than blind devotion and obedience

Drawing on his more than 40 years of in-depth study of Indian Philosophy under the tutelage of his guru, Nitya Chaitanya Yati, author Scott Teitsworth explores the scientific approach to self-transformation and spiritual enlightenment encoded in Krishna’s advice to Arjuna in the Bhagavad Gita. Providing a verse-by-verse examination of the first two chapters, he reveals the Gita’s lessons to prepare the seeker to meet and successfully work with a guru--whether an outside teacher or the intuitive knowledge that arises from overcoming the psyche’s learned limitations.

The author shows that the Gita does not advocate blind devotion to a guru or god but rather personal development, victory over your fears, and liberation of the psyche. He demonstrates how Krishna’s advice provides tools to guide us out of our fear-based experiences to reconnect with the suppressed parts of our inner being. He explains how Arjuna’s doubts and confusions represent the plight of every person--we are born free but gradually become bogged down by the demands of our society, continuously dependent on outside authority for answers and disconnected from our true inner nature. He reveals how Krishna’s advice offers guidance for dealing with life’s conflicts, which societal limitations to reject, and how to see through the polarizing notion of good versus evil to form a balanced state of mind superior to both.

Restoring the fearless vision of the ancient rishis, who, like today’s scientists, prized skepticism as an important technique for accessing truth, Teitsworth reveals the Gita as a guide to an authentic guru-disciple relationship as well as to constructing a life of significance, freedom, and true sovereign adulthood.

Commentary on Chapter I
THE YOGA OF ARJUNA’S DESPONDENCY

Virtually everyone glosses over the first chapter of the Bhagavad Gita as being merely introductory. It was Nataraja Guru in his groundbreaking commentary of 1954 (published in 1961) who first stressed its profound significance. In his introduction he remarks:

The first chapter is . . . the only one which contains the problems of the Gita stated correctly before the discussion by the Guru Krishna. This chapter therefore requires the closest attention. And yet oddly enough, commentators even like Sankara have almost ignored it or even treated it as superfluous. Sankara’s commentary begins only with verse 10 of Chapter II, and he dismisses what precedes in a summary fashion not at all in proportion with the rest of his labours. The remaining seventeen chapters of the Gita make an attempt to dialectically revalue these same problems. It is, therefore, very important not to leave unnoticed even those minor peculiarities of this chapter in which the author hides here and there certain indications for the guidance of the intelligent reader.

In order to find a cure, it is essential to recognize the disease, and before entering a path of self-correction we must not only be dissatisfied with our current state but also have some inkling why we’re unhappy. To properly present ourselves at the feet of a guru, someone who can throw light on our predicament, we must have already recognized our own limitations. The patient cannot expect the doctor to do all the work but must be committed as an enthusiastic participant. These crucial elements of a transformative experience are introduced so artfully in the first chapter that for over two millennia almost no one noticed.

At the moment the Gita begins two factions of the Kuru clan are intent on battle. The Kauravas have deviously confiscated the rightful territory of the Pandavas, the family that includes the two protagonists of our story, Prince Arjuna and his friend and chariot driver Krishna. Conventional wisdom urges the Pandavas to go to war and redress the crime. Negotiations have been tried and abandoned, since the triumphant usurpers dare not allow the situation to be framed in moral terms. Warfare is their only hope of maintaining their dominance.

Arjuna’s hurt feelings as the loser impel him to just give up and slink away, as he is certain that fighting is a lose-lose proposition. But the Gita wants him--and by proxy, us--to discover a third route, to stand up as a neutral party for his rightful place in the world. For someone caught in a paradoxical dilemma, both fighting and escaping lead to endless complications. Only wisdom, which Arjuna will soon seek out from his servant Krishna, can bring about a felicitous outcome.

Arjuna thus stands for each one of us. His challenges symbolize ours, and in our journey through the Gita the parallels will be made clear. With this first chapter we are entering a path of enlightenment that bursts all the boundaries of orthodoxy and grants us the right to be utterly and spectacularly ourselves.

Verse 21
And, O King, he [Arjuna] spoke thus to Krishna: O Acyuta! Stop my chariot right in the middle between the two armies

Arjuna and Krishna are very old friends, but their relationship is about to grow into one of the deepest possible: that of guru and disciple. Discipleship involves an intense determination to release your conditioned mind-set in order to discover your actual nature beneath its camouflage of borrowed behavioral clothing, and its course is filled with many ups and downs. Conditioning does not surrender without a fight.

Right here, Arjuna has done something amazing: he has found the correct place for a seeker of truth, right in the middle between the warring factions. The importance of this positioning cannot be overstressed. Arjuna wants to be in the best place for a global perspective, where the most intelligent decisions can be made. He has overcome his natural affinity to his group so he can judge the conflict without prejudice.

If you want to have substantive, positive change, you have to pull your “chariot” (or whatever you’re riding on) into the middle of the action and calmly study both (or all) points of view. If you’re attached to one side or the other you won’t be able to do this. In the search for truth you cannot be partisan. Similarly, looking on from a remote location as an “armchair philosopher” or “detached observer” is not helpful. Nataraja Guru used to say, “Armchair philosophy bakes no bread.” Detachment usually fails in this respect. You have to be in the thick of the action, or your reactions become abstracted and distant, and consequently less transformative. Finding the neutral position in the center means you are still engaged, even though you are detached from partiality or prejudice.

Positioning the chariot in the middle is a pictogram of dialectics or yoga, which the Gita will present in detail throughout its course. One great secret it espouses is that the Absolute is revealed by the yogic or dialectic balancing of the poles in any and every situation. An honest yogic appraisal requires your side and your opponent’s side to be treated neutrally, given equal weight. When we retain our affiliation with our side, even if we strive for evenhandedness, our view is inevitably tilted toward our own team. Importantly, our team includes “I” and its assessment of the “Other.” Any emotional coloration prejudices the process even further. A wise referee or guru is invaluable at this point, because they can see what we are blind to. Only when a true picture emerges from the chaos can an effective act of yogic harmonization occur. The inwardly or outwardly guided seeker must find the position of neutrality equidistant from the extremes and harmonize all the elements. Accomplishing this extricates them from their conditioning to reveal the optimal perspective of a judicious overview.
Scott Teitsworth

Scott Teitsworth is a lifelong student of Indian philosophy and modern science under the tutelage of Nitya Chaitanya Yati, himself a disciple of Nataraja Guru. An editor of books written by these gurus, he and his wife host the Portland branch of the Narayana Gurukula, where they have taught classes on the Bhagavad Gita and Indian philosophy since the 1970s. He lives in Portland, Oregon.

“The Bhagavad Gita is a preeminent text of spiritual liberation, whose mystical import has seldom been addressed in print. Teitsworth reveals its hidden significance in an elucidation that stands head and shoulders above the rest. If you have ever wondered what yoga is really all about, this is the place to look.”

“I am delighted with Scott Teitsworth’s The Path to the Guru. It is an exceptional approach to concentrate on just two chapters! Scott’s interpretation is well suited for the modern day. I would highly recommend this book to spiritual seekers of all faiths.”

“The Bhagavad Gita is a multifaceted jewel shedding multicolored lights. The author has caught quite a few of these lights and thus has shed more light on this ancient classic that will prove to be of immense help to all lovers of the book.”

“Scott Teitsworth’s relevant and in-depth analysis of its first two sections of the Bhagavad Gita skillfully balances a perspective that is both accessible and true to the heart of the original text.”

The Path to the Guru

The Science of Self-Realization according to the Bhagavad Gita