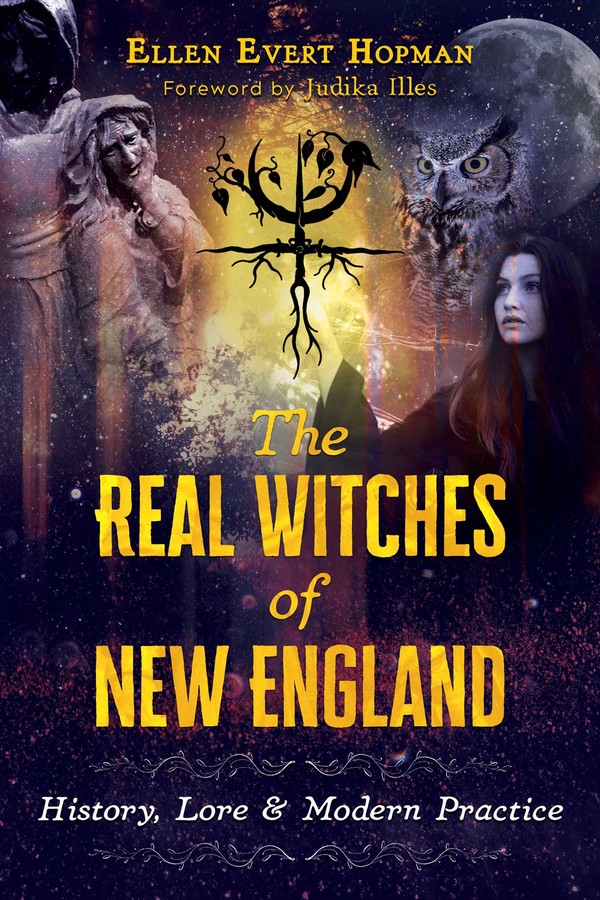 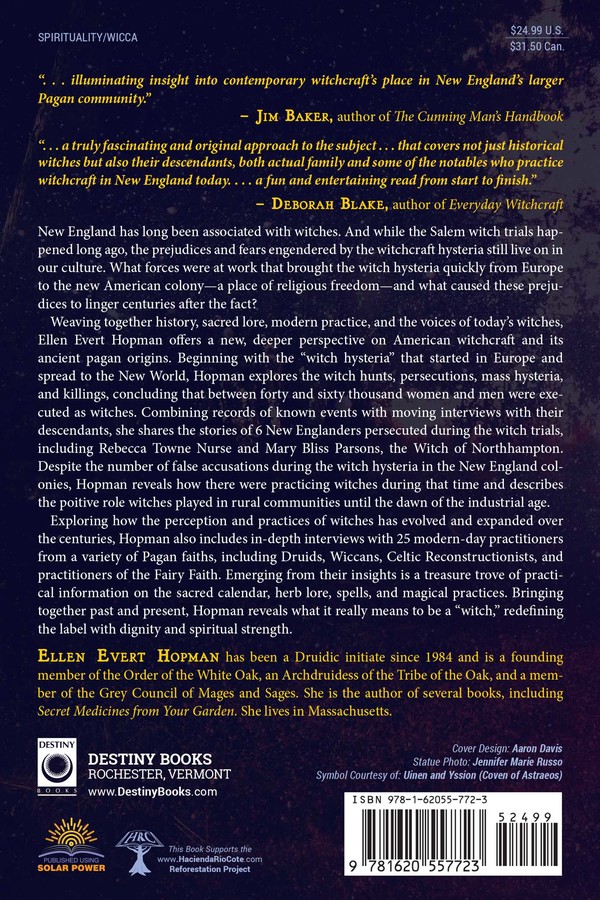 Reveals the origins and history of the New England witch hysteria, its continuing repercussions, and the multilayered practices of today’s modern witches

• Explores the positive role witches played in rural communities until the dawn of the industrial age, despite ongoing persecution

New England has long been associated with witches. And while the Salem witch trials happened long ago, the prejudices and fears engendered by the witchcraft hysteria still live on in our culture. What forces were at work that brought the witch hysteria quickly from Europe to the new American colony, a place of religious freedom--and what caused these prejudices to linger centuries after the fact?

Weaving together history, sacred lore, modern practice, and the voices of today’s witches, Ellen Evert Hopman offers a new, deeper perspective on American witchcraft and its ancient pagan origins. Beginning with the “witch hysteria” that started in Europe and spread to the New World, Hopman explores the witch hunts, persecutions, mass hysteria, and killings, concluding that between forty and sixty thousand women and men were executed as witches. Combining records of known events with moving interviews with their descendants, she shares the stories of 13 New England witches persecuted during the witch trials, including Tituba and Mary Bliss Parsons, the Witch of Northhampton. Despite the number of false accusations during the witch hysteria in the New England colonies, Hopman reveals how there were practicing witches during that time and describes the positive role witches played in rural communities until the dawn of the industrial age.

Exploring how the perception and practices of witches has evolved and expanded over the centuries, Hopman also includes in-depth interviews with 25 modern-day practitioners from a variety of pagan faiths, including druids, wiccans, Celtic reconstructionists, and practitioners of the fairy faith. Emerging from their insights is a treasure trove of practical information on the sacred calendar, herb lore, spells, and magical practices. Bringing together past and present, Hopman reveals what it really means to be a “witch,” redefining the label with dignity and spiritual strength.

First, can you say a bit about who you are?

I live in the little town of Bellingham, Massachusetts and I am a senior marketing program manager. I am nearly done with my master’s in integrated marketing communications and I have a bachelor’s in English literature. In addition to my full-time job, I have a photography business and write entertainment and lifestyle articles for a magazine in Worcester, Massachusetts. I practice yoga regularly and I have a beautiful 5-year-old son.

Which accused New England witch are you descended from?

Did your family carry the stories of your ancestors or did you find out about it all recently?

I remember very vaguely going to Salem with my grandmother when I was perhaps eight or nine years old. I remember her saying something about me being related to an accused witch as we passed the old cemetery on the way to a shop. I never thought about it again.

Then, when I was researching my family lines, which I have been doing for around twenty years, I uncovered Mary and my first thought was “Oh, well there she is,” recalling my grandmother’s comment from years before.

Coming from a Catholic family, I am not surprised this was never mentioned by anyone who perhaps knew about it. My grandmother was different, practicing with crystals and Tarot as I recall, and more open to other ideas.

What do you make of the fact that those you are related to, who were accused, were mostly women?

It is not really that surprising. At the time women were considered inferior and more susceptible to spiritual evil, as women traditionally are more emotional creatures. They also were encouraged to follow their husbands and stay silent in political and religious matters, not really able to voice their own opinions on things. Additionally, women who did have a measure of power were often considered to be outside of the circle of piety.

Women who owned land, who had a reputation for being able to heal with natural tinctures, or who simply stood up for things they believed in were generally frowned upon. The women in my family were strong-minded, with Joanna voicing her opinion over land disputes that her husband William was having with the Putnam family as well as in religious matters. Joanna was accused of being a witch shortly after this. Her daughters were likely accused not because of anything they did personally, but because the belief was that witchcraft ran in families.

How do you personally define Witchcraft?

This is an interesting question. I think there are many different interpretations of what Witchcraft is. If I were alive in the 1600s, I am well aware that I would have been considered a witch. I do not personally consider myself a Witch, but an empath. I am able to feel (and sometimes absorb) the energies, emotions and moods that are around me very intensely, whether it be from other people, nature, animals, places or things unseen. There are times when I will feel the need to sit next to someone, and that person will pour their heart out to me and what I tell them is a guidance that I know doesn’t come from me alone, often bringing up details that only that person could understand. Is it “Witchcraft”? I don’t think so, but these things would have surely gotten me hanged in 1692.

What I do believe, and many may disagree, is that some people are simply born with abilities. These cannot be learned or acquired because someone wants to have them. People who “become” a witch because they want power are completely missing the point. Power is fleeting and no one really owns it--it is not a personal trait, but something lent to them by the universe or whatever God you choose to believe in. A true Witch, in my mind, is humble, realizing that we are all one with everyone else, all the nature and elements around us and that there is a responsibility to honor all of that and care for it, not be above it or use it for personal gain.

Do you have strong impressions regarding the accused witch you are descended from?

I do. I feel pride. Not to have a person in my line who has a notable name, because honestly I couldn’t care less about that, more because I am proud to be descended from a woman who had such courage and strength in the face of enormous terror. Her petition to the court is one of the most inspiring things I have ever read. To be sitting in a horrible prison as an older woman who was ripped from her family . . . twice, refusing to admit to something that she did not do when it would have been so easy to concede, and instead writing a letter telling those in power that they were wrong. That she knew she was going to die because of their blindness and refusal to do what was right. That even though she was going to die that they should consider what they were doing so that others would not have to as a result of their stupidity.

What is most fascinating to me is that she wrote all of this in a respectful way and told them that the day would come when they would see their error. She remained true to herself until the very end, which is simply beautiful to me. Though the petition was ignored by the courts, it lives on to encourage and inspire people today.

Ellen Evert Hopman has been a teacher of herbalism since 1983 and is a professional member of the American Herbalists Guild. A member of the Grey Council of Mages and Sages and a former professor at the Grey School of Wizardry, she has presented at schools and workshops across the United States and Europe. A Druidic initiate since 1984, she is a founding member of The Order of the White Oak (Ord Na Darach Gile), a Bard of the Gorsedd of Caer Abiri, and a Druidess of the Druid Clan of Dana. A former vice president of The Henge of Keltria, she is the author of A Druid's Herbal of Sacred Tree Medicine; A Druid’s Herbal for the Sacred Earth Year; Walking the World in Wonder; Being a Pagan; Tree Medicine, Tree Magic; and Priestess of the Forest. She lives in Massachusetts.

“The Real Witches of New England offers illuminating insight into contemporary witchcraft’s place in New England’s larger Pagan community. Following an introductory section tracing the devastating evolution of the Western cultural construct of conspiratorial ‘witchcraft,’ Hopman conducts two series of interviews that mirror the divide between the historical persecution of purported Satanic ‘witches’ and today’s self-identified beneficent witches. This will appeal to both those who are simply curious about this widespread yet covert subculture and those who, having observed American Paganism from its youthful beginnings in the ‘Occult Revival’ of the 1970s, will see how adherents of today take up the cause now that the movement’s pioneers are in retirement or have passed on.”

“The Real Witches of New England is a truly fascinating and original approach to the subject. Hopman gives us a wide-ranging overview of the topic that covers not just historical witches but also their descendants, both actual family and some of the notables who practice Witchcraft in New England today. In someone else’s hands this might have been a dry recital of facts, but instead it is a fun and entertaining read from start to finish.”

“Hopman mixes a historian’s curiosity with a journalist’s zeal, resulting in a monumental achievement that bridges our own world with that of America’s earliest witches.”

“A fascinating read and a brilliant and creative approach to American witchcraft--with moving portraits of America’s first accused ‘witches,’ fascinating interviews with their descendants, and thoughtful insights from modern New England witches who redeem the label with dignity and spiritual depth. Who we remember will never die.”

“Ellen Evert Hopman took a discerning eye to accomplish this tome of knowledge. In our age of accountability this book is of its time, an account of the oppression of women and the incredible knowledge they so willingly shared. Witches all, we celebrate our heroes of the past.”

– Lady Rhea, author and creator of The Enchanted Candle

“A detailed and very well researched book focusing on witches and witchcraft in New England. Primarily dealing with Salem, Massachusetts, and historical and present-day links thereto, Ellen Evert Hopman has opened a window into some of the occult practices in this part of the country. An excellent read!”

– Jane T. Sibley, Ph.D., author of The Way of the Wise and The Divine Thunderbolt

"Most books examining history fail their readers. Either they err on the side of accuracy and burden the reader with excruciatingly dry facts and footnotes or they fall prey to a juicy story that doesn't hold up to critical scrutiny. The Real Witches of New England: History, Lore & Modern Practice succeeds where others fail by weaving a rich, detailed, and fascinating narrative reaching back to 1400BCE and connecting it to current witches and their practices."