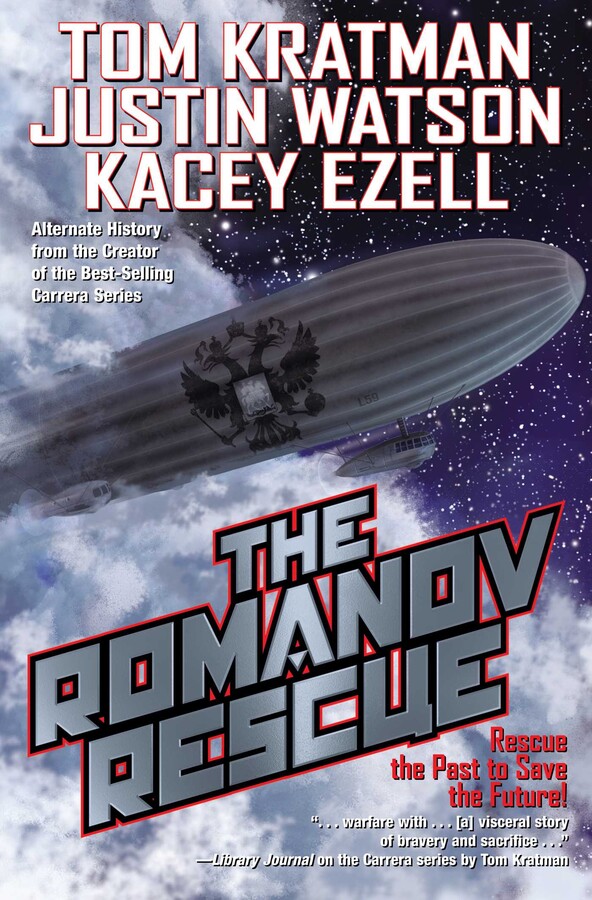 A NEW NOVEL OF ALTERNATE HISTORY FROM MASTER OF MILITARY SF TOM KRATMAN, JUSTIN WATSON, AND KACEY EZELL. As WWI comes to a close, a German general, an escaped prisoner of war, and the crew of an airship converge to effect THE ROMANOV RESCUE. Can there be a world without communism?

Mankind's history is bound up in the fabric of fate, a strong cloth, tough and closely woven.

It is the beginning of 1918, the last year of the greatest war in human history to date. All the belligerents stagger on their feet. Starvation is an ever present reality, while disease waits in the wings. In Russia, no longer a belligerent but, instead, rapidly descending into civil war and chaos, a lone family—father, mother, four beautiful young girls, and a brave but sickly boy—await their own fate, shivering and hungry in the dark, hoping and praying for salvation.

Their relatives in England have turned their backs. The guards set over them do little but torment them. They look Heavenward, but God doesn't answer. They know they're a threat to the new regime, a threat that will, in time, be eliminated.

But even the strongest fabric has flaws. An escaped prisoner of war, caught, injured, and punished, but still highly capable, might be one. An airship, returned and at loose ends after a failed mission to Africa might be another. A German general, taking a wrong turn on his nightly walk and suddenly coming face-to-face with the reality of the monster rising in the east, would be a third.

Follow, then, as the general gives the orders, the prisoner of war raises the men from among his fellows, and the airship launches itself forward, to contest fate, to tear the fabric of time, and to effect The Romanov Rescue.

About the Carrera series:

“[I]nterplanetary warfare with . . . [a] visceral story of bravery and sacrifice . . . fans of the military SF of John Ringo and David Weber should enjoy this SF action adventure.”—Library Journal

“Kratman raises disquieting questions on what it might take to win the war on terror . . . realistic action sequences, strong characterizations, and thoughts on the philosophy of war.”—Publishers Weekly

“[Baen publisher] Toni [Weisskopf] and I disagree about everything except about how good his books are.”—John Birmingham

In 1974, at age seventeen, Tom Kratman became a political refugee and defector from the PRM (People’s Republic of Massachusetts) by virtue of joining the Regular Army. He stayed a Regular Army infantryman most of his adult life, returning to Massachusetts as an unofficial dissident while attending Boston College after his first hitch. Back in the Army, he managed to do just about everything there was to do at one time or another. After the Gulf War, with the bottom dropping completely out of the anti-communist market, Tom decided to become a lawyer. Every now and again, when the frustrations of legal life and having to deal with other lawyers got to be too much, Tom would rejoin the Army (or a somewhat similar group, say) for fun and frolic in other climes. His family, muttering darkly, put up with this for years. He no longer practices law, instead writing full-time for Baen. His novels for Baen include A State of Disobedience, Caliphate, and the series consisting of A Desert Called Peace, Carnifex, The Lotus Eaters, The Amazon Legion, Come and Take Them, The Rods and the Axe, and A Pillar of Fire by Night. He has written novels with John Ringo: Watch on the Rhine, Yellow Eyes, and The Tuloriad. Also for Baen, he has written the first three volumes of the modern-day military fiction series Countdown.

Justin Watson grew up an Army brat, living in Germany, Alabama, Texas, Korea, Colorado and Alaska, and fed on a steady diet of X-Men, Star Trek, Robert Heinlein, DragonLance, and Babylon 5. While attending West Point, he met his future wife, Michele, on an airplane, and soon began writing in earnest with her encouragement. In 2005 he graduated from West Point and served as a field artillery officer, completing combat tours in Iraq and Afghanistan, and earning the Bronze Star, Purple Heart and the Combat Action Badge.

Medically retired from the Army in 2015, Justin settled in Houston with Michele, their four children and an excessively friendly Old English Sheepdog.

Kacey Ezell is an active-duty USAF helicopter pilot who also writes sci-fi/fantasy/alt history/horror fiction. Her first novel was a Dragon Award finalist in 2018, and her stories have been featured in Baen’s Year’s Best Military and Adventure Science Fiction compilation in 2017 and 2018. In 2018, her story “Family over Blood” won the 2018 Year’s Best Military and Adventure Science Fiction Reader’s Choice Award. She writes for Baen and Chris Kennedy Publishing.