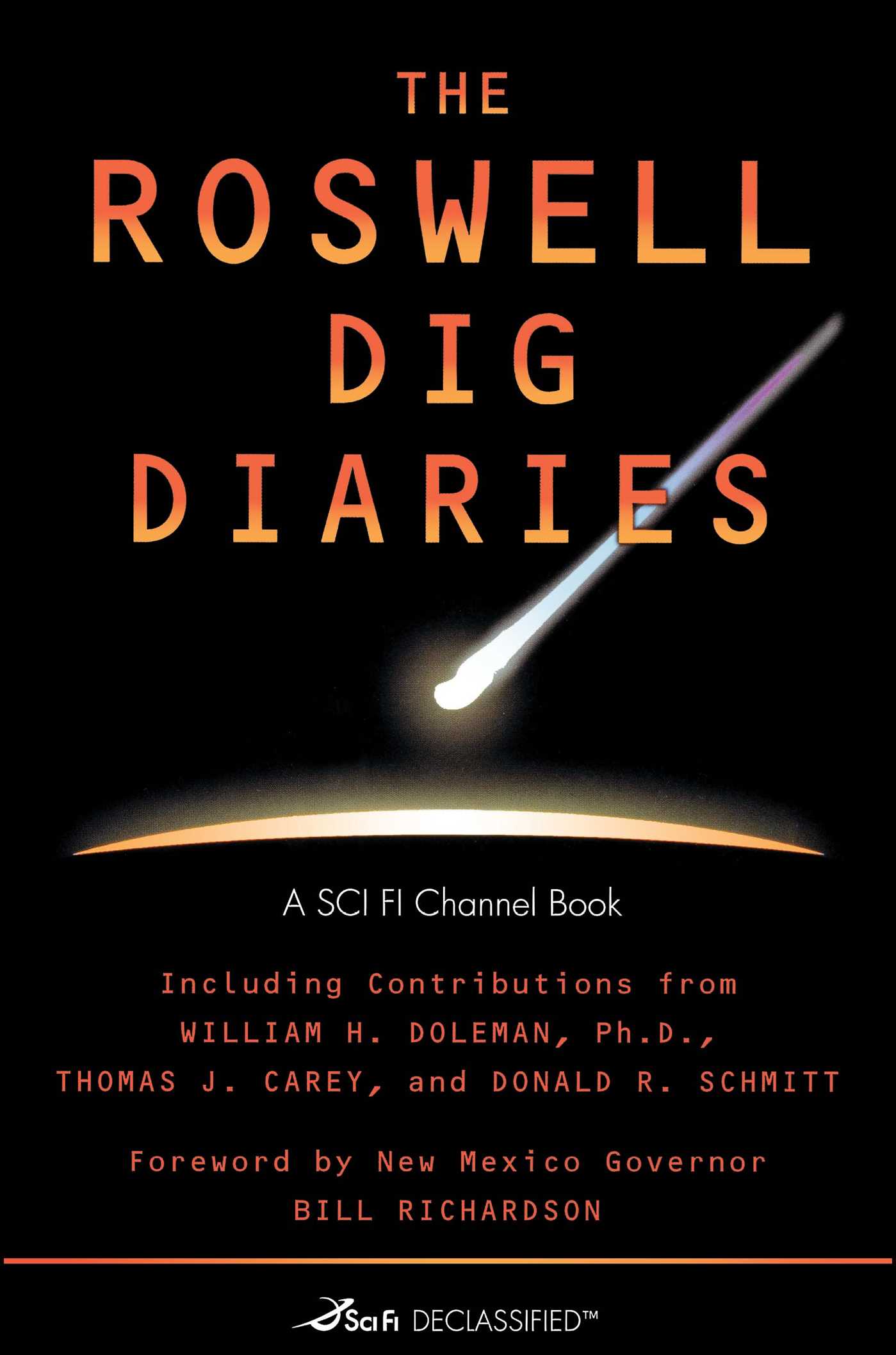 A comprehensive, exclusive, in-depth exploration of the infamous Roswell UFO incident. Read the facts, sift through the evidence, and decide for yourself—are we alone?

In July 1947, something crashed in the desert near Roswell, New Mexico. What that object was, as well as what happened in the days following the crash, has been hotly disputed ever since. Did the United States government cover up the existence of an extraterrestrial UFO? Were alien bodies recovered from the crash site? Or was it all nothing more than the failed launch of a weather balloon?

As part of the Syfy Channel’s ongoing mission to separate fiction from fact, the network has sponsored an unprecedented, comprehensive archeological investigation of the crash site. Utilizing modern-day forensic tools, scientists from the University of New Mexico have explored deeper into the Roswell incident than anyone has before.

Now, for the very first time, discover the exclusive complete archeological report, including the final scientific conclusions of this landmark excavation and never-before-seen maps and photos of the crash site. This groundbreaking volume also takes you behind the scenes of the investigation with exclusive day-by-day personal journals and private company emails. You think you may know about Roswell, but now you’ll know the truth.

Introduction: Digging Up the Truth

The alleged Roswell UFO crash of 1947 remains one of the great unsolved mysteries of the twentieth century, if not in the annals of history. Something truly extraordinary crashed on an isolated ranch in central New Mexico, and after fifty-plus years the high desert country still protects its secrets. We know that fact better than anyone, thanks to what transpired within days of the initial event.

The U.S. military went to extreme lengths to conceal its own concern as well as the true nature of the strange wreckage. An official press release, dated July 8, 1947, verified the Army Air Force's recovery of a flying disc, as UFOs were then called, near the sleepy desert town of Roswell, New Mexico. Later the same day, that astonishing claim was retracted by the military, and the unknown object was said to have been nothing more than a common weather balloon device. And so the secret was kept intact as the prevailing desert winds resumed inexorably over the silent, vacant ranchland.

But behind the scenes, the government was using all available means, legal and illegal, to quash media interest in "the story of the millennium." The crash site was cordoned off from all outsiders, including the press, and every shred of evidence was retrieved. But time has a way of mitigating such extreme efforts, and the ultimate proof still remains. That is, of course, if one is willing to look for it.

The cover-up was executed with such dispatch and precision that the Roswell Incident, as it is now generally referred to, was thought to have been effectively contained and relegated to the "Silly Season" file. But no secret, especially a government secret, is safe these days, and Roswell is no exception. This fact became quite evident when former Roswell base intelligence officer Major Jesse A. Marcel decided to reveal his role in those long-ago events. "It was nothing made on this earth," he declared. The truth was beginning to emerge.

This was the very first indication that the original press release stating that a crashed UFO had been "captured" was the correct one. Additional witnesses would soon be located or come forward, and a new version of what transpired at Roswell in 1947 began to peel away the layers of a cover-up. One of the incident's most puzzling aspects was why the military in Roswell would continue to detain ranch foreman W. W. "Mack" Brazel for days after the balloon story had been accepted by the press as the alternative explanation. After all, it was Brazel who had originally alerted Marcel and others to the massive amount of unusual wreckage on a remote ranch seventy-five miles northwest of Roswell. And it was his son, Bill Brazel Jr., who, upon learning of Mack's fate, rushed from his home and new bride in Albuquerque to the ranch and filled in for his absent father. Not only would Bill Jr. discover the heavy vehicle tracks left behind by the military during the cleanup, but he would also become a firsthand eyewitness to one of the most striking pieces of evidence that still intrigues researchers of the Roswell story today: a 500-foot gouge, starting at the upper northwest pinnacle of the debris field site, where something had impacted the surface of the hard desert terrain.

After his father's return, Bill Brazel Jr. would continue to help out on the ranch. During this period, he fortuitously found several small pieces of the wreckage scattered nearby, but not buried. His descriptions of what he found were consistent with those of Major Marcel. Unfortunately, when the military found out two years later about the "scraps" that Bill Jr. was keeping in a cigar box, air force officers from Roswell went to his home and confiscated everything. Nevertheless, the fact that pieces of wreckage were found after the military recovery operation at the crash site implies that more debris may still exist around the location. Of course, it is one thing to deduce that there are artifacts from 1947 still at the crash site; it is quite another matter to find them.

As with the case against the UFO phenomenon in general, critics cite the lack of hard physical evidence in the Roswell, New Mexico, case as proof that nothing of an extraterrestrial nature occurred there in July 1947, as witnesses and researchers contend. Although witness testimony is considered evidence in courts of law throughout the land, the testimonies from individuals bearing witness to the extraordinary events, now numbering into the hundreds, are not considered sufficient as proof by skeptics, debunkers, academics, and most elite media. Incontrovertible physical evidence, they say, must be obtained, and good science must be brought to bear upon it before definitive conclusions can be made. These same worthies, however, uncritically accept the air force's balloon explanation as fact, without a smidgen of evidence -- let alone proof -- to support it.

Most UFO researchers, scientists, and academics alike, agree that the subject of UFOs, unlike other fields of study, does not readily lend itself to the application of the so-called scientific method for studying the phenomenon in order to produce verifiable results that can be tested and replicated (requirements for any conclusions to be drawn from such studies). One aspect of the Roswell case, however, does lend itself to the implementation of scientific methods of scrutiny -- namely, allegations that physical artifacts were recovered from the crash. To date, all such claimed artifacts, when subjected to testing, have been shown to be either definitely of earthly origin (as in the case of a piece of Japanese jewelry a few years ago) or not demonstrably otherworldly in nature. Is waiting for someone to show up on our doorstep with the Holy Grail of Roswell the best we can do in our quest to find the answer?

Over the twenty-five years that the Roswell case has been investigated, researchers have suggested that there may have been as many as three separate but related crash sites involved in the event. Not all agree, however, on their locations, with the notable exception of one site. Even the air force agrees on this one site, though it disagrees that it was a UFO that crashed there. This site is located on the former J. B. Foster Ranch, where Mack Brazel found a large sheep pasture covered with pieces of strange wreckage. The air force does not dispute the location of this site, and it agrees that something crashed there in 1947, but it disputes what it was, choosing to believe instead that Brazel found the remains of a high-altitude balloon array and acoustic device used in a failed attempt to detect the expected detonation of the Soviet Union's first atomic bomb.

What was it then -- a UFO, as civilian investigators suggest, or a balloon and tinfoil device, as per the official position of the air force today? These are the only choices now available to us, after years of study and controversy. Although the site was "vacuumed" back in 1947, testimony by the late Bill Brazel Jr. and others suggest that the military did not retrieve all of the debris. Wind action may have carried pieces of the debris far from their original area of concentration to more outlying areas, and burrowing animals may have carried pieces into their subterranean nests. Whatever it was, it is not too far-fetched to think that several, or even many, pieces remain buried within just a few feet of the surface of the desert floor and, therefore, might be obtained using standard archeological field methodology. If this were successful, we would finally have the answer once and for all.

In 1989 a small band of researchers from the J. Allen Hynek Center for UFO Studies in Chicago attempted to conduct a preliminary archeological survey of the acknowledged (Brazel) debris field site associated with the 1947 Roswell events. Meagerly funded and short on trained personnel, this underequipped "dig" turned up a rusted tin can and a single shell casing for its efforts. Understandably, no report of this endeavor was ever written. A return to the site to conduct a follow-up excavation was planned, but the necessary funding never materialized; the idea never came to fruition and was forgotten.

In May 1998, the two of us joined forces to continue a proactive investigation of the case. In 1999 we approached the University of New Mexico's Office of Contract Archeology in Albuquerque about the feasibility of conducting a full-scale historical archeological "dig" at the Foster Ranch crash site in Lincoln County, New Mexico, for the purpose of unearthing whatever might lie buried just beneath the surface of the earth there. To our gratification, the archeologists at UNM concurred that it could be done in a normal manner with standard archeological field techniques that would be used for any dig in that locale. Everyone agreed that the dig should be undertaken, given its historical import to the state of New Mexico as well as its potential payoff -- the definitive answer to one of the great mysteries of all time, and the possibility of proof that we are not alone in the universe.

Once in hand, we shopped the dig proposal around for several years to potentially interested sources of funding, without success. In the spring of 2002 we were approached by the SCI FI Channel's Larry Landsman about working together on a project connected to Roswell. A quick trip to Roswell with Larry in June 2002 solidified Sci Fi's commitment to an excavation, and the dig commenced three months later.