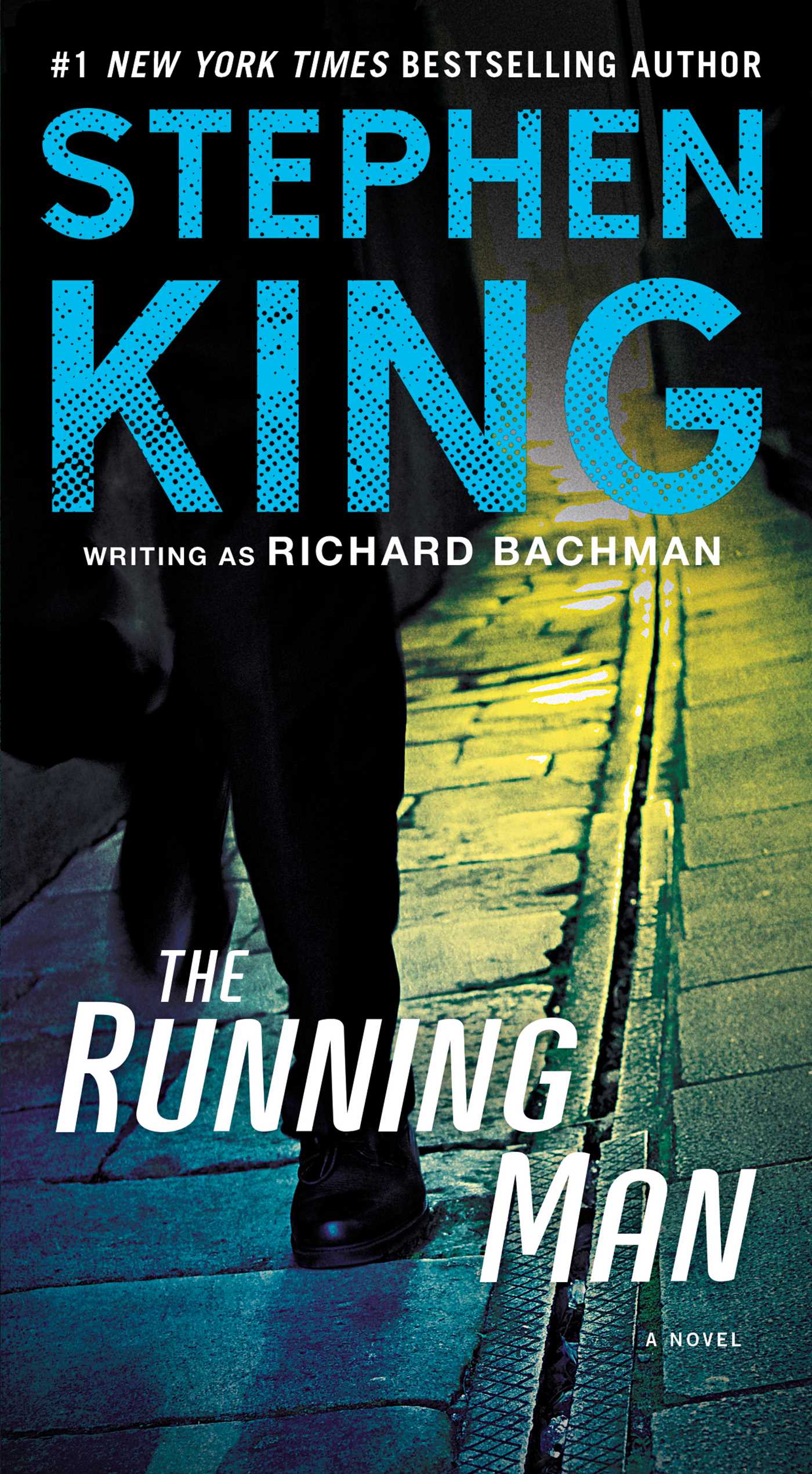 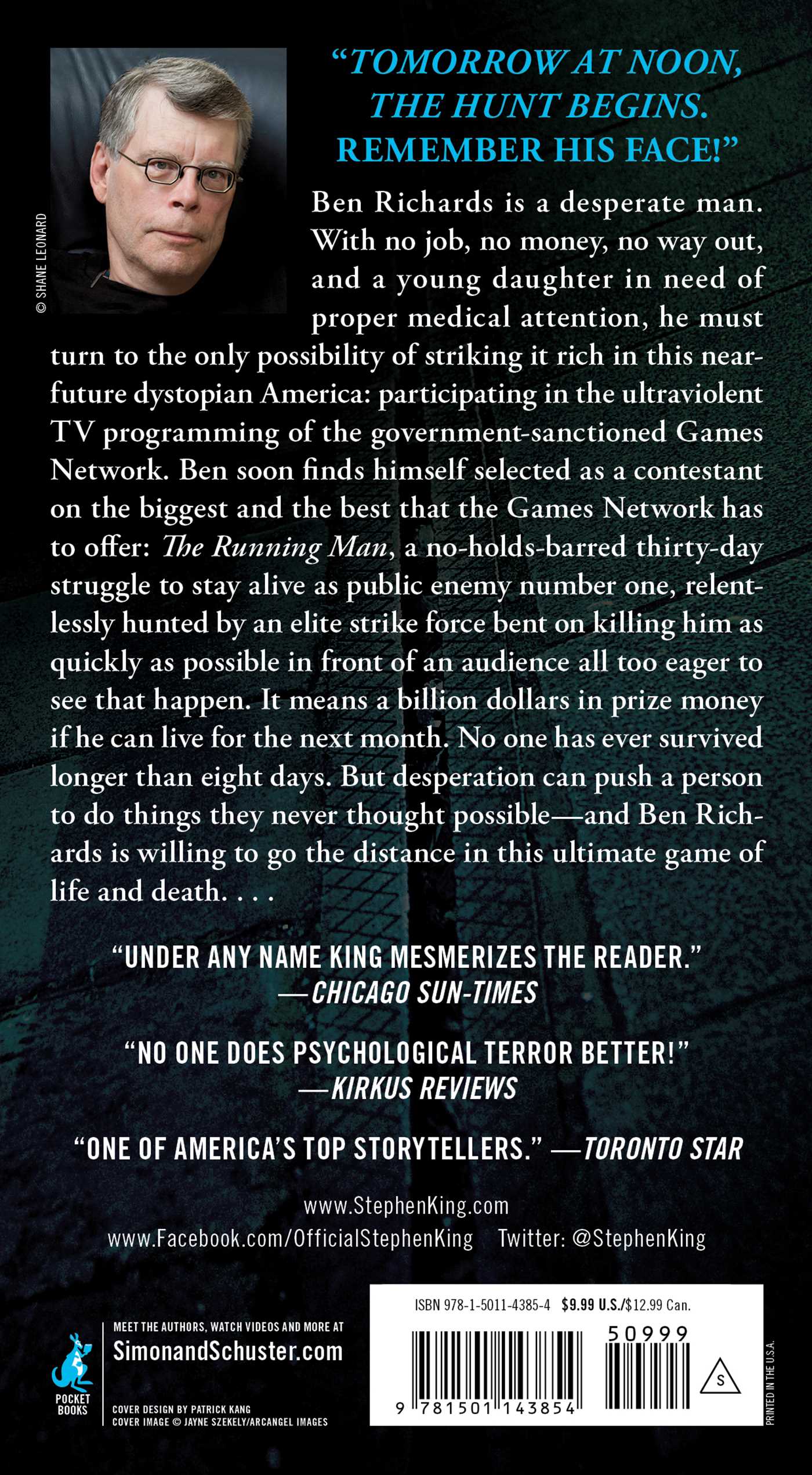 A desperate man attempts to win a reality TV game where the only objective is to stay alive in this #1 national bestseller from Stephen King, writing as Richard Bachman.

“Tomorrow at noon, the hunt begins. Remember his face!"

Ben Richards is a desperate man. With no job, no money, no way out, and a young daughter in need of proper medical attention, he must turn to the only possibility of striking it rich in this near-future dystopian America: participating in the ultra-violent TV programming of the government-sanctioned Games Network. Ben soon finds himself selected as a contestant on the biggest and the best that the Games Network has to offer: “The Running Man,” a no-holds-barred thirty-day struggle to stay alive as public enemy number one, relentlessly hunted by an elite strike force bent on killing him as quickly as possible in front of an audience all-too eager to see that happen. It means a billion dollars in prize money if he can live for the next month. No one has ever survived longer than eight days. But desperation can push a person do things they never thought possible—and Ben Richards is willing to go the distance in this ultimate game of life and death....

The Running Man . . . Minus 100 and COUNTING . . .
She was squinting at the thermometer in the white light coming through the window. Beyond her, in the drizzle, the other highrises in Co-Op City rose like the gray turrets of a penitentiary. Below, in the airshaft, clotheslines flapped with ragged wash. Rats and plump alley cats circulated through the garbage.

She looked at her husband. He was seated at the table, staring up at the Free-Vee with steady, vacant concentration. He had been watching it for weeks now. It wasn’t like him. He hated it, always had. Of course, every Development apartment had one—it was the law—but it was still legal to turn them off. The Compulsory Benefit Bill of 2021 had failed to get the required two-thirds majority by six votes. Ordinarily they never watched it. But ever since Cathy had gotten sick, he had been watching the big-money giveaways. It filled her with sick fear.

Behind the compulsive shrieking of the half-time announcer narrating the latest newsie flick, Cathy’s flu-hoarsened wailing went on and on.

“How bad is it?” Richards asked.

He brought both fists down on the table. A plastic dish jumped into the air and clattered down.

“We’ll get a doctor. Try not to worry so much. Listen—” She began to babble frantically to distract him; he had turned around and was watching the Free-Vee again. Half-time was over, and the game was on again. This wasn’t one of the big ones, of course, just a cheap daytime come-on called Treadmill to Bucks. They accepted only chronic heart, liver, or lung patients, sometimes throwing in a crip for comic relief. Every minute the contestant could stay on the treadmill (keeping up a steady flow of chatter with the emcee), he won ten dollars. Every two minutes the emcee asked a Bonus Question in the contestant’s category (the current pal, a heart-murmur from Hackensack, was an American history buff) which was worth fifty dollars. If the contestant, dizzy, out of breath, heart doing fantastic rubber acrobatics in his chest, missed the question, fifty dollars was deducted from his winnings and the treadmill was speeded up.

“You’ll what?” He looked at her brutally. “Hustle? No more, Sheila. She’s got to have a real doctor. No more block midwife with dirty hands and whiskey breath. All the modern equipment. I’m going to see to it.”

He crossed the room, eyes swiveling hypnotically to the Free-Vee bolted into one peeling wall above the sink. He took his cheap denim jacket off its hook and pulled it on with fretful gestures.

“Why not? At worst you can get a few oldbucks as the head of a fatherless house. One way or the other you’ll have to see her through this.”

She had never really been a handsome woman, and in the years since her husband had not worked she had grown scrawny, but in this moment she looked beautiful . . . imperious. “I won’t take it. I’d rather sell the govie a two-dollar piece of tail when he comes to the door and send him back with his dirty blood money in his pocket. Should I take a bounty on my man?”

He turned on her, grim and humorless, clutching something that set him apart, an invisible something for which the Network had ruthlessly calculated. He was a dinosaur in this time. Not a big one, but still a throwback, an embarrassment. Perhaps a danger. Big clouds condense around small particles.

He gestured at the bedroom. “How about her in an unmarked pauper’s grave? Does that appeal to you?”

It left her with only the argument of insensate sorrow. Her face cracked and dissolved into tears.

“Maybe they won’t take me,” he said, opening the door. “Maybe I don’t have whatever it is they look for.”

“If you go now, they’ll kill you. And I’ll be here watching it. Do you want me watching that with her in the next room?” She was hardly coherent through her tears.

“I want her to go on living.” He tried to close the door, but she put her body in the way.

“Give me a kiss before you go, then.”

He kissed her. Down the hall, Mrs. Jenner opened her door and peered out. The rich odor of corned beef and cabbage, tantalizing, maddening, drifted to them. Mrs. Jenner did well—she helped out at the local discount drug and had an almost uncanny eye for illegal-card carriers.

“You’ll take the money?” Richards asked. “You won’t do anything stupid?”

He clutched her awkwardly, then turned away quickly, with no grace, and plunged down the crazily slanting, ill-lighted stairwell.

She stood in the doorway, shaken by soundless sobs, until she heard the door slam hollowly five flights down, and then she put her apron up to her face. She was still clutching the thermometer she had used to take the baby’s temperature.

Mrs. Jenner crept up softly and twitched the apron. “Dearie,” she whispered, “I can put you onto black market penicillin when the money gets here . . . real cheap . . . good quality—”

“Get out!” she screamed at her.

Mrs. Jenner recoiled, her upper lip rising instinctively away from the blackened stumps of her teeth. “Just trying to help,” she muttered, and scurried back to her room.

Barely muffled by the thin plastiwood, Cathy’s wails continued. Mrs. Jenner’s Free-Vee blared and hooted. The contestant on Treadmill to Bucks had just missed a Bonus Question and had had a heart attack simultaneously. He was being carried off on a rubber stretcher while the audience applauded.

She closed the notebook with a vicious snap and settled down to watch the next game.

Stephen King is the author of more than sixty books, all of them worldwide bestsellers. His recent work includes If It Bleeds, The Institute, Elevation, The Outsider, Sleeping Beauties (cowritten with his son Owen King), and the Bill Hodges trilogy: End of Watch, Finders Keepers, and Mr. Mercedes (an Edgar Award winner for Best Novel and a television series streaming on Peacock). His novel 11/22/63 was named a top ten book of 2011 by The New York Times Book Review and won the Los Angeles Times Book Prize for Mystery/Thriller. His epic works The Dark Tower, It, Pet Sematary, and Doctor Sleep are the basis for major motion pictures, with It now the highest-grossing horror film of all time. He is the recipient of the 2020 Audio Publishers Association Lifetime Achievement Award, the 2018 PEN America Literary Service Award, the 2014 National Medal of Arts, and the 2003 National Book Foundation Medal for Distinguished Contribution to American Letters. He lives in Bangor, Maine, with his wife, novelist Tabitha King.