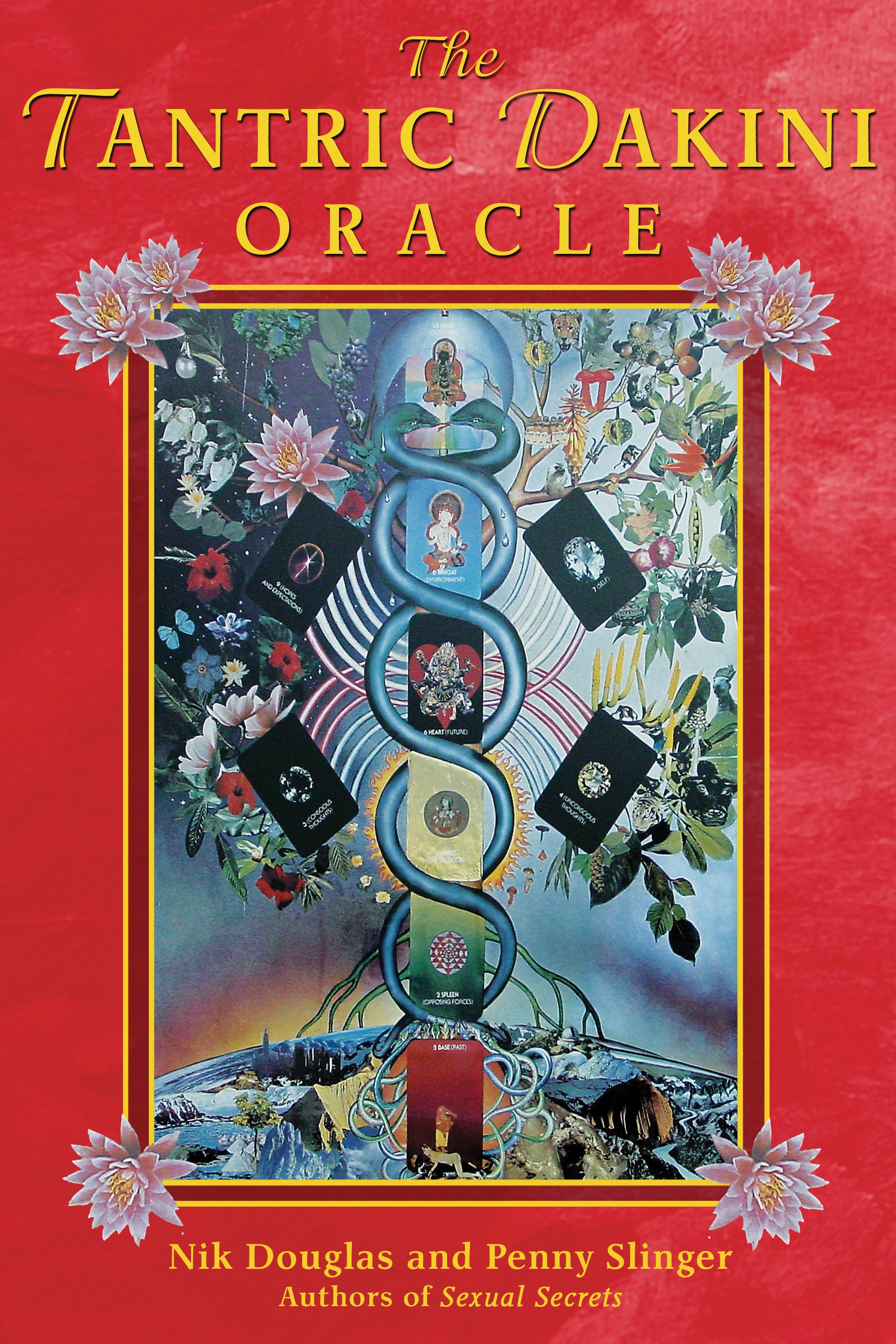 A tarot based on the mystical teachings of the Tantric tradition

The Tantric Dakini Oracle is a system of divination based on the authors’ work in the Ranipur Jharial Temple of Orissa, India. The temple contains stone carvings of 64 Dakinis, ancient symbolic representations of the female principles of intuitive wisdom. The Dakinis are the guardians of the deeper mysteries of the self, and it is through them that the secrets of inner transformation are opened.

Nik Douglas, a scholar of both Sanskrit and Tibetan, has drawn upon his extensive knowledge of Tantric mystical teachings to create a modern synthesis of their system of divination. The 65 cards in the deck are a collage of surrealistic images representing symbols and archetypes that are designed to affect both conscious and subconscious levels of perception. Created by artist Penny Slinger, the cards are a mirroring device that evokes subtle memories, sentiments, desires, or fears. Mediation on the images of The Tantric Dakini Oracle puts the reader in contact with the energies of the Dakinis, opening a path to one’s inner world and enhancing the user’s faculties of clairvoyance and visualization.

Composition of the Oracle

Once the Oracle cards have been laid out it will be helpful to read the description of the symbolism and the divinatory meaning.

The cards which relate to the Major Arcana of the Tarot (0-21) have particularly potent divinatory meanings. We have given variant readings for different locations in some instances; otherwise, the general divinatory meaning applies.

Cards related to the Suits of the Minor Arcana (22-61) change their specific divinatory meanings more frequently, according to their location on the Tree of Life chart.

Time cards (62-64) are not found in the Tarot. In The Tantric Dakini Oracle system they offer possibilities for directly resolving the influences of destiny. Helpful indications are given.

All interpretations and divinatory meanings are guidelines only. As the reader becomes familiar with the cards and their symbolism, the different relationships will become clearer. The Tantric Dakini Oracle cards are most effective on an intuitive level. Spontaneous interpretation through an awareness of Tantric symbolism is both direct and personal.

The cards may be successfully consulted for a person in his absence by bearing that person in mind at the time of shuffling and dealing.

There are no reverse card readings, as in the Tarot. Dakini cards are placed directly in position, right way up.

The Tantric Dakini Oracle cards are comprised of:

• A card conceived of as the center of a cycle of Transformation, taking the form of a JOKER, around which the psychological energies move in the play of life. The number of the joker is zero.

• Sixty-four cyclical cards, representing the energies of transformation moving conceptually around a fixed Joker. These cards are divided up in the following way:

1 to 21 Card-images related to the Major Arcana of the traditional Tarot.

22 to 31 Card-images related to the Minor Arcana of the traditional Tarot, of the Element Air and the suit of Swords.

33 to 41 Card-images related to the Minor Arcana of the traditional Tarot, of the Element Fire and the suit of Wands.

42 to 51 Card-images related to the Minor Arcana of the traditional Tarot, of the Element Water and the suit of Cups.

52 to 61 Card-images related to the Minor Arcana of the traditional Tarot, of the Element Earth and the suit of Pentacles.

Method of the Tree of Life

The Tree of Life depicts the subtle body of the yoga philosophy with psychic centers, or chakras, designated according to authentic Eastern tradition. The chart is in effect a synthesis of the Semitic Tarot divination and the Eastern Tantric teachings on the subtle body. The Tree of Life has its roots in the earth and its leaves reach out into space.

Wish-Fulfilling Gem bears the number "6," signifying harmony, the balanced blend of intellect and emotion, the Head and the Heart. It is the number of the sixth sense and the entry into the world of fulfillment. Relates to the Lovers of the Tarot.

From the tranquil lake of bottomless quietude the Wish-fulfilling Gem rises up. Within its multi-faceted form the All-Good Buddha Samantabhadra and his female counterpart Samantabhadri are seated. In this male/female Tantric aspect they represent the non-dual per-fect Buddhahood of peaceful compassion. The emanations from this mystic form are like the rainbow hues of the White Light refracted from the facets of a diamond. The glyph is crowned with a smaller version of itself, which is reflected in the water below. The whole forms a double mystic scepter (vajra), suggesting the unlimited nature of this essence principle as projected on the mind-sky of inner space. This card depicts divine love in its most sacred and benign aspect, the resolution of all dualities.

Divinatory Meaning
This card is the most potent boon card of the deck. It may always be interpreted as the fulfillment of a wish, though the emphasis is on the mystic rather than the worldly. On the lowest level it may be just good luck, and on the spiritual level (in the Heart or Head) it indicates deep metaphysical development, maturation, and the fruit of endeavor. Much can be gained from concentrated meditation on this card, the father and mother of all Buddhas. Imagine the light within the jewel of the self, and then place oneself within. Visualize the effulgent emanations of light. Feel the Compassionate essence. In the chart of the Tree of Life as a subtle body, the mystic form of the All-Good Buddha and his consort is depicted above the moon of the Head center, since this is the traditional location according to Tantra. This indicates the evolutionary archetypal ancestor of the human spirit, to which we must all ultimately return. The card tells of spiritual guidance and ultimate realization. It indicates a "coming into balance and harmony."
Nik Douglas

"Open(s) a path to one's inner world and enhancing the user's faculties of clairvoyance and visualization."

". . . puts users in contact with the energies of the dakinis, archetypes of feminine wisdom."