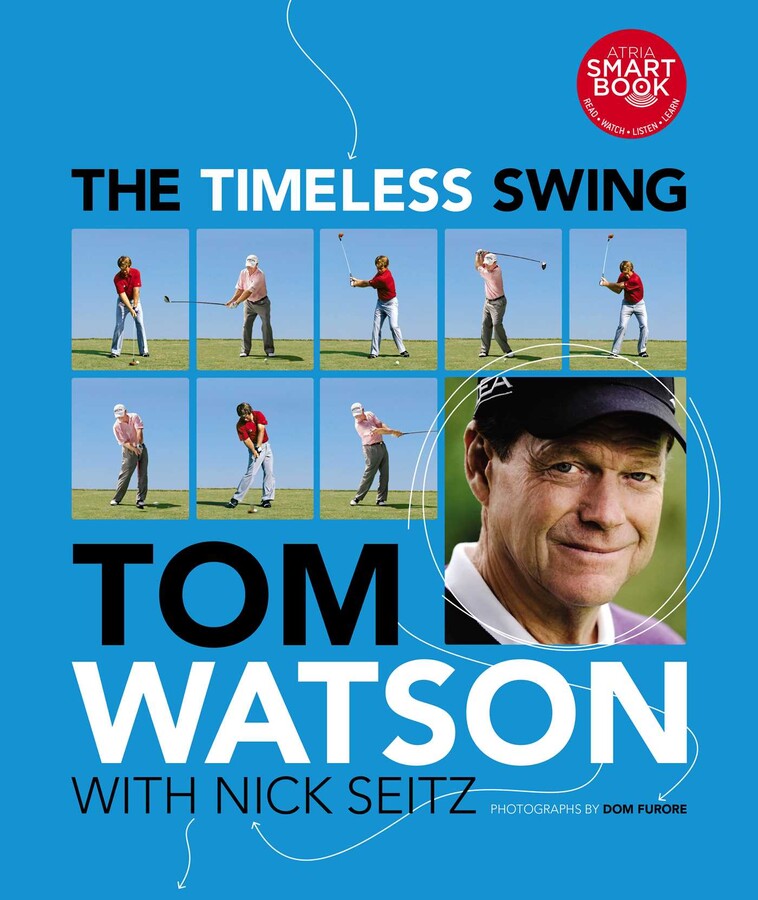 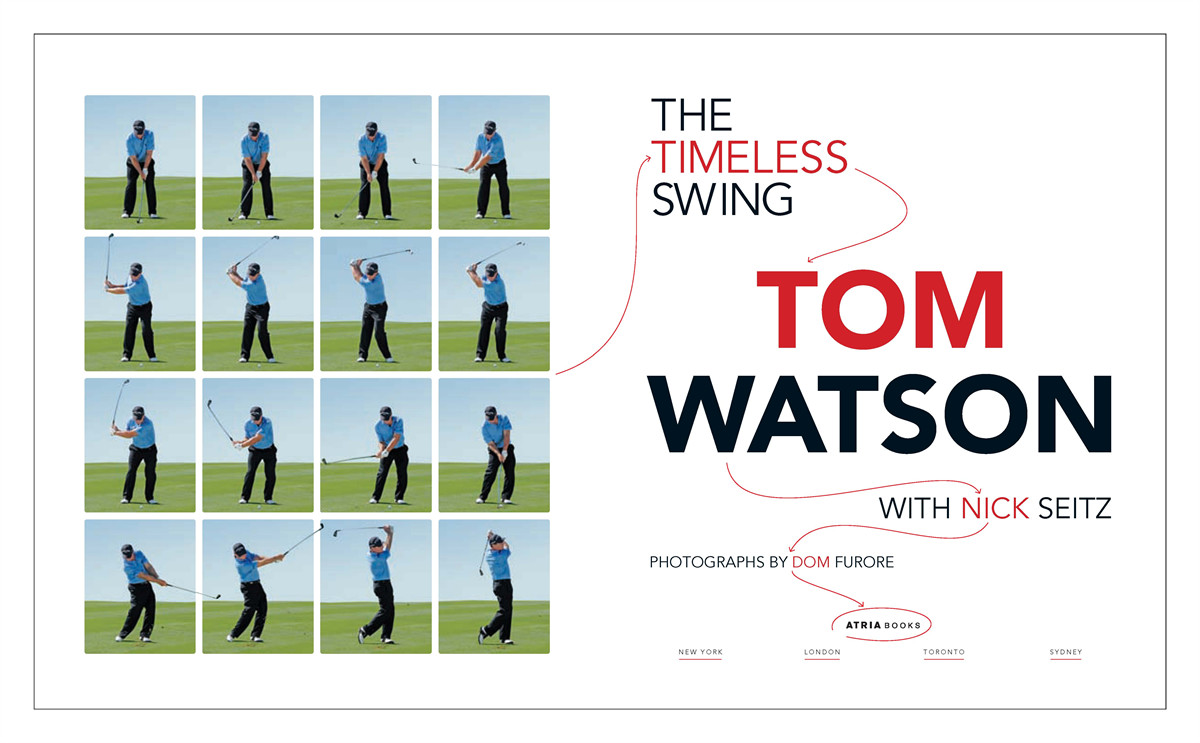 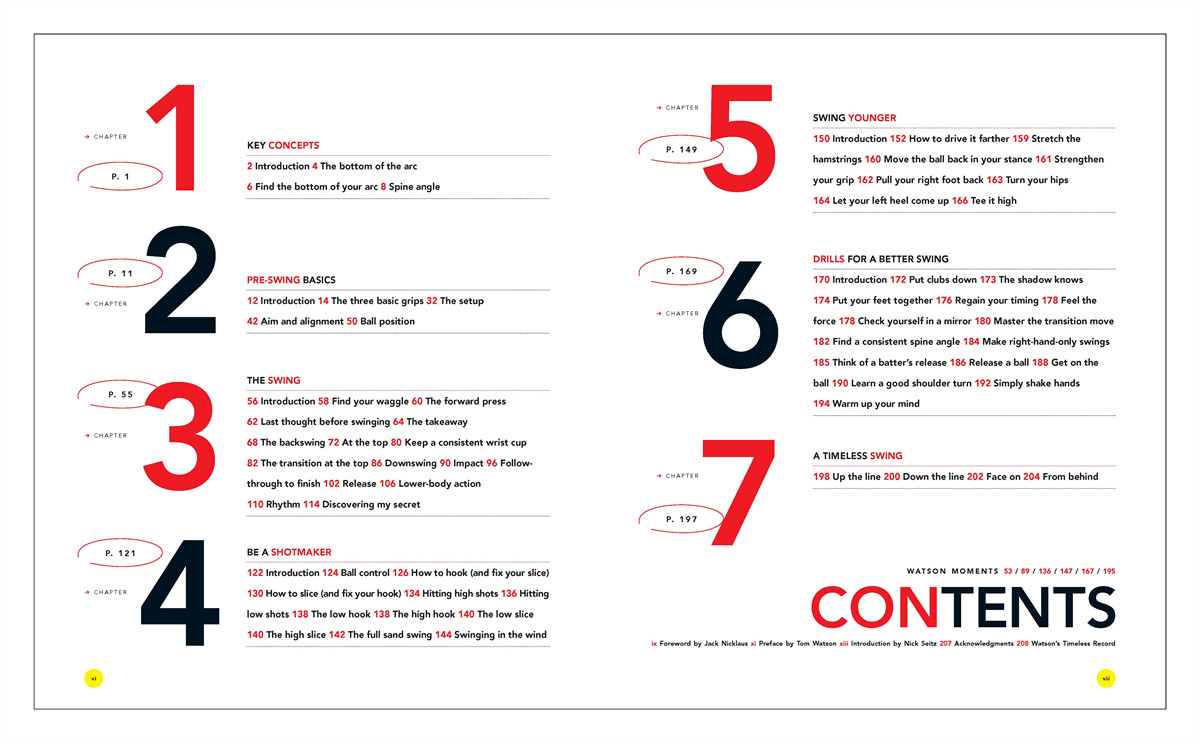 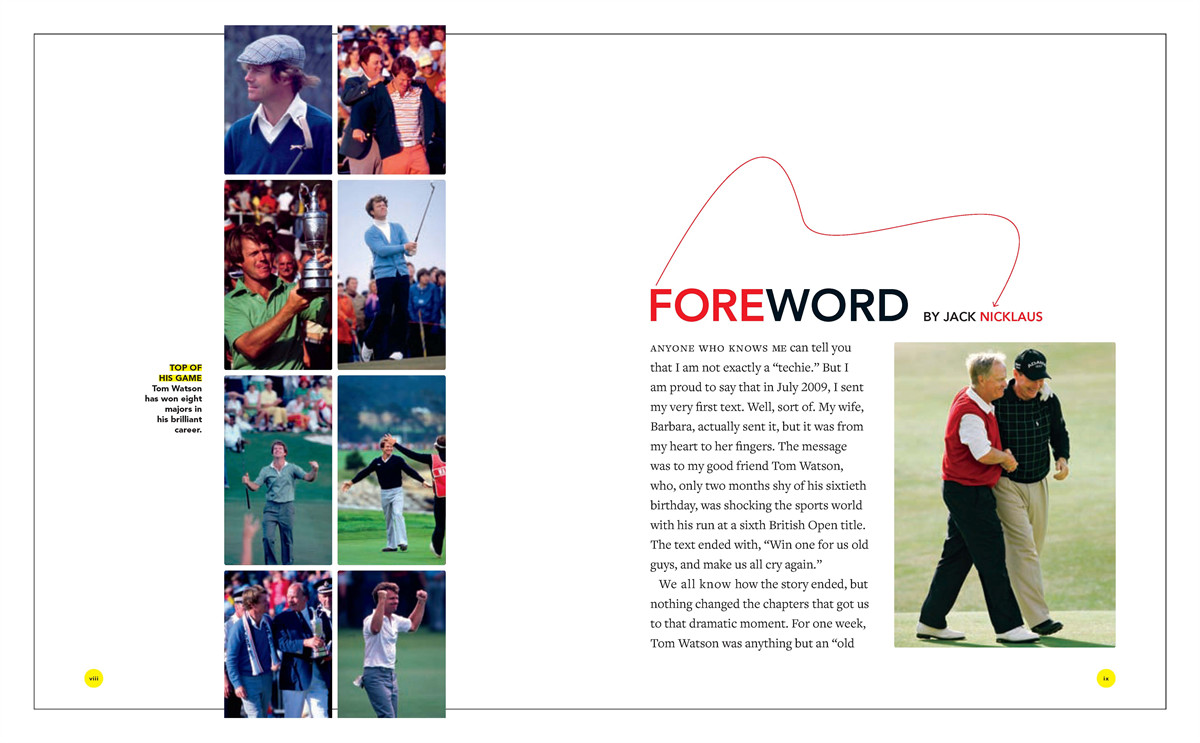 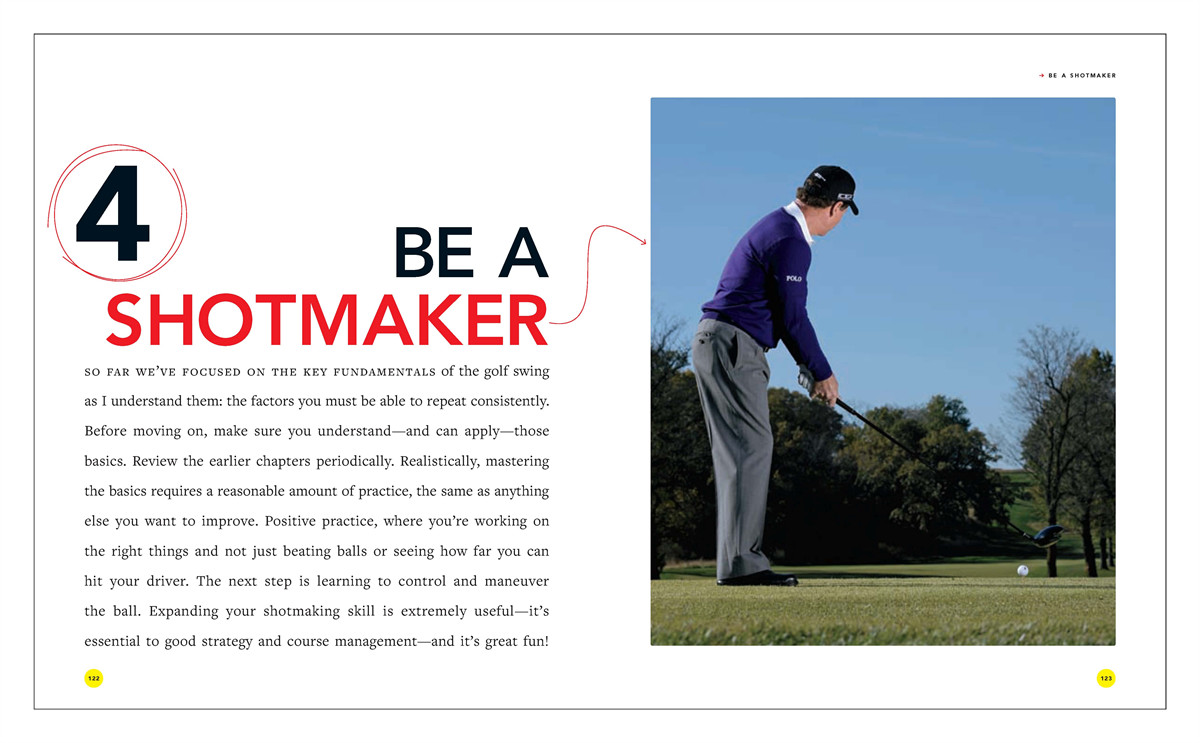 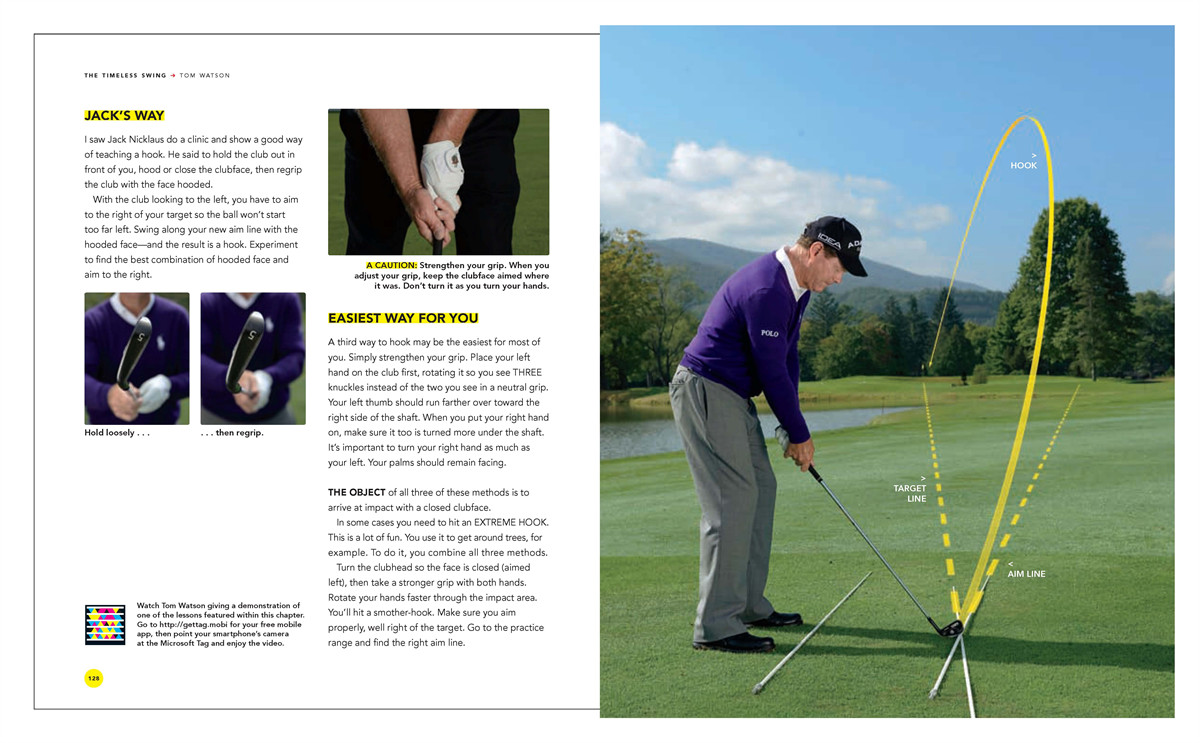 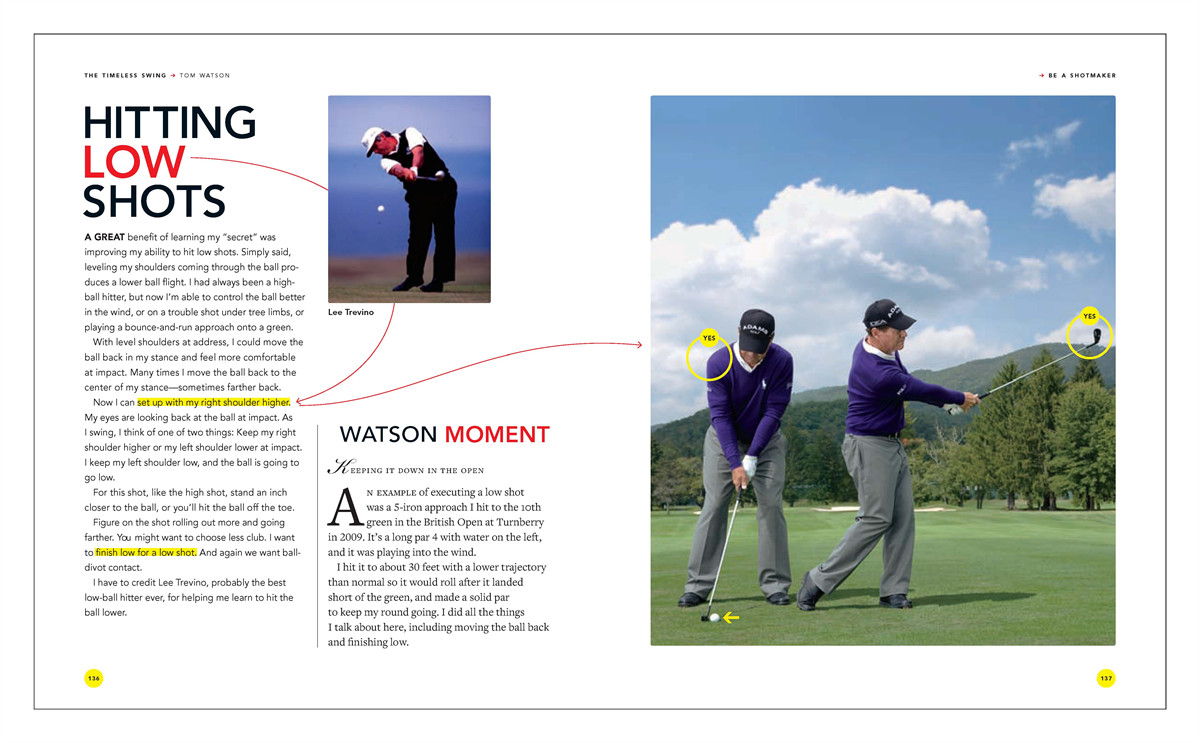 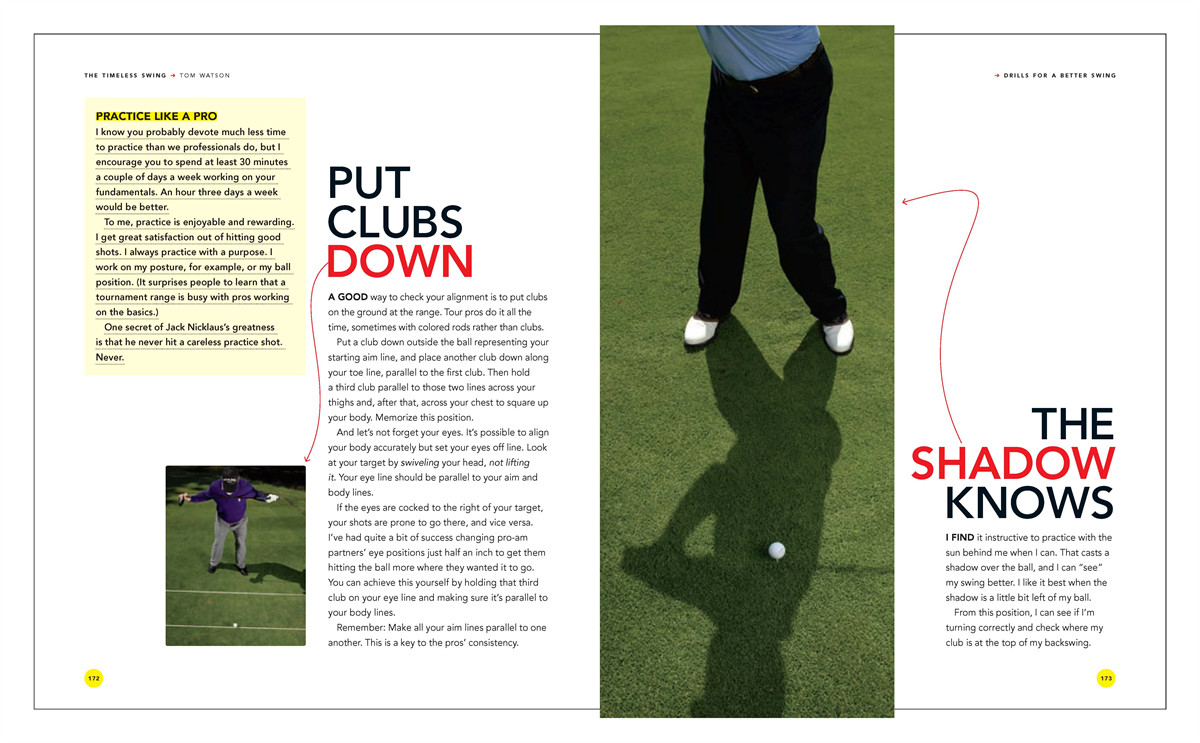 From one of golf's greatest and most iconic players comes this definitive instructional guide offering the essential lessons for improving your game at any age, illustrated with 4-color photographs throughout.

Tom Watson, a few months short of his sixtieth birthday, led the 2009 British Open with one hole to play and came within an unlucky bounce of winning it for the sixth time. His stunning performance electrified the golf world and showcased a swing that has endured as a model of good mechanics, rhythm, and repeatability.

In The Timeless Swing, American Ryder Cup Captain Tom Watson draws on all the knowledge and expertise he has accumulated over the course of his extraordinary career, imparting lessons that will help golfers of any age play to the best of their abilities and enjoy the game more. From fundamentals like learning the proper grip to advanced shotmaking techniques such as swinging in wind, he breaks down the full swing into all its parts and explains with his trademark easy voice the most effective ways for mastering each.

Watson complements these lessons with time-tested drills and also offers a variety of tips and exercises to help golfers continue to swing well as they get older. And for the first time ever, he reveals the two key concepts he considers the most important of all—concepts that can enable players of all levels to attain a timeless swing.

The Timeless Swing is illustrated with stunning photographs by award-winning Golf Digest photographer Dom Furore, and Watson carefully draws the reader’s eye to what is essential in each photo, providing the kind of easy-to-understand guidance usually found only in private lessons.

With a foreword by Jack Nicklaus and archival highlights of Tom Watson’s most memorable shots and tournaments, this is an indispensable guide from a consummate teacher and one of the most respected and admired players in the game.

I’VE BEEN COLLABORATING ON instruction writing with Tom Watson for thirty years now, and been a grateful recipient of his swing advice. My grip will never be strong enough to suit him, but he persists. Boy, does he persist.

You get the feeling that he cares as much about your game as he cares about his own, and that he enjoys working and playing with average golfers as much as with tour players. He has gone overseas for The Open a week early to play links courses with old high-school pals from Kansas City. He relishes coaching his partners in pro-ams and corporate outings.

A strong traditionalist, he just plain loves all aspects of the game, from its earliest history to its latest techniques. As he grows older himself, he has developed a special feel for instruction that promotes longevity. If that doesn’t make him unique among the great players, it makes him one of the rare few.

“The most amazing thing about him,” says Jerry Tarde, the editor in chief of Golf Digest, “is that his interest in the instructional aspects of the game remains undimmed by the passage of time. As opposed to other superstars who either have a withering interest or never had much at all.”

Watson’s quest for learning and improving is never-ending, and his own swing reflects it. Leading teachers and players believe he is swinging better than he’s ever swung.

On the practice range at a major championship not long ago, Padraig Harrington turned around to see whose shots were making such a crisp, pure sound. “I’ve never heard or seen a ball hit like that,” Harrington marveled. It was Watson.

You no doubt are familiar with Watson’s age-defying feats in recent years. He lost the 2009 British Open in a playoff at nearly sixty years of age and not long removed from hip replacement surgery, captivating the entire world of sports and a broader public as well.

He was paired for the first two rounds with young international stars Ryo Ishikawa of Japan and Rory McIlroy of Northern Ireland. Their ages combined didn’t total his sixty. Watson finished 29th—ahead of both of them.

At one point over the weekend, a young man in the gallery shouted, “You rock, Tom Watson!”

It’s fitting that Watson became the second golf professional emeritus at the five-star Greenbrier resort in West Virginia, succeeding the late Sam Snead. Snead could have given Old Man River two a side; he was the oldest man to win a PGA Tour title (at fifty-two) and contend in a major championship (third in the PGA Championship at sixty-two).

He is one of the role models Watson credits in this book. Both had long swings built to last and competitive fires that never needed stoking.

So how does a legendary golfer produce a book like this? How much does Watson really get involved? Here’s a snapshot of the process. He and I and Dom Furore, a top golf photographer, get together for a week at a golf course, in this case the Greenbrier. I know that sounds enviable, but consider that the work days began at dawn and didn’t end till dusk.

Watson demonstrates a topic, Dom photographs it digitally, I capture Watson’s commentary on a tape recorder. Afterward the recording is transcribed with copies for Watson and me, and Dom prints the photos. Watson picks the best pictures, often making notes on the proof sheets to suggest graphic highlighting. Watson and I go back and forth until we’re satisfied with the text, then we both review the finished layouts. He could not be more involved in the entire process, start to finish.

A word of explanation to our left-handed and/or lady golfing friends. We realize that the accepted language of the game isn’t ideal, intended as it is for right-handed, male players. Over the years, leading publications like Golf Digest have experimented with “neutral” references that seemed forced and unnatural, and caused more confusion for most people than the usual terminology. We hope you will make the conversions that may well have become second nature by now.

And I hope Watson’s swing advice helps you as much as it has helped me over the golfing years. May there be many more for all of us. It’s not called the game of a lifetime frivolously. 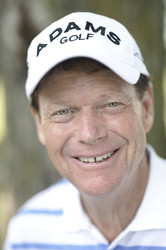 Tom Watson, a member of the PGA World Hall of Fame, was named PGA Player of the Year six times and currently ranks sixth on the list of major championship victories, with eight. A devoted teacher of the game, he is a bestselling author whose popular monthly articles have appeared in Golf Digest magazine for more than thirty years. Watson lives with his wife, Hilary, on their farm near Kansas City, Kansas. Visit him online at tomwatson.com.

"The influence of Byron Nelson and other great mentors helped Tom Watson develop a swing that has won dozens of times. That adds up to a book that will help you if you help yourself by reading it and practicing what it teaches."
—Phil Mickelson

“Tom’s swing through the years has looked the same but has changed for the better. He still makes a wonderful full turn. What he did in the 2009 Open Championship was truly unbelievable. Tom is one of the game’s great champions and a super guy.”
—Butch Harmon

“Tom Watson has always ferociously lived a golfing life of self-improvement. We might not have his talent, or his burning desire, but with The Timeless Swing we can now have his wisdom and perspective. Perhaps no one has worked harder to figure out what makes for success in this wicked game.”
—Jimmy Roberts

“Tom Watson’s swing has been and continues to be the epitome of the adjectives timeless and consistent. It has been an honor and a pleasure to watch, learn, and play against such a simple but most effective, efficient, and successful swing, which has lasted for decades.”
—Greg Norman

“If you are going to try to find a golf swing that will make you a better player now and for years to come, who better to learn from than Tom Watson?”
—John Feinstein

“Tom Watson has a very basic golf swing, nothing fancy or complicated, so his instruction and observations on these pages will be easy to absorb and adapt to the talents of all players. He is a strong player, thanks to his outstanding golf swing.”
—Arnold Palmer

“I've known Tom since he was fifteen years old, and watched his swing develop into one of the most enduring in golf. He knows how he did it and has a wonderful ability to communicate it."
—Jim Hardy

“This book will definitely teach you how to play better golf, but keeping the same handicap will be up to your own sly self.”
—Dan Jenkins