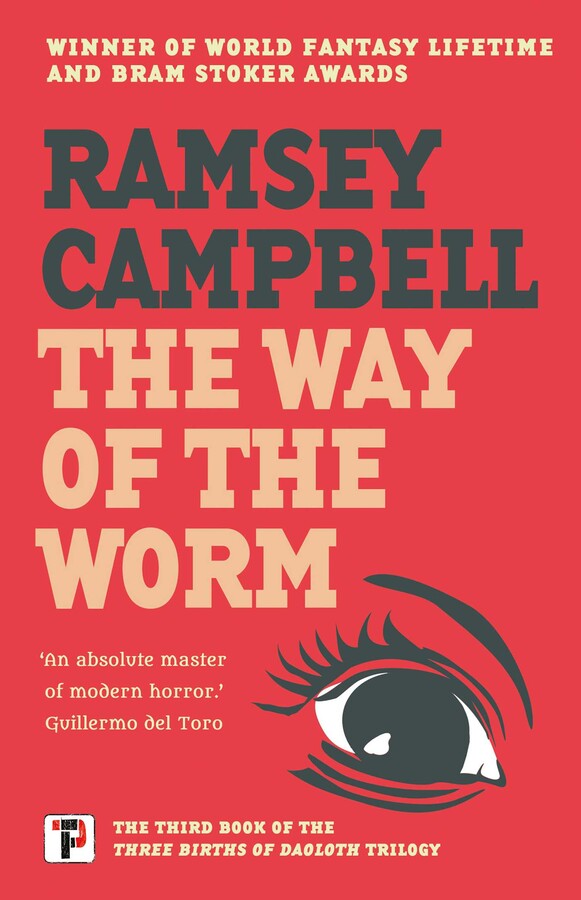 The Way of the Worm

"With The Way of the Worm, Campbell’s cosmic trilogy comes to a triumphant conclusion." — S.T. Joshi

Book 3 in the Three Births of Daoloth trilogy.

The present day, or something very like it. Dominic Sheldrake has retired from lecturing and lives on his own. His son Toby is married with a small daughter. The occultist Noble family are more active than ever. Their cult now openly operates as the Church of the Eternal Three, and has spread worldwide. The local branch occupies the top floors of Starview Tower, a Liverpool waterfront skyscraper. To Dominic’s dismay, Toby and his wife Claudine are deeply involved in it, and he suspects they are involving their small daughter Macy too.

Dominic lets his son persuade him to attend a meeting of the church, where he encounters all three generations of the Nobles. Although Christian Noble is almost a century old, he’s more vigorous than ever – inhumanly so. The family takes turns to preach an apocalyptic sermon that hints at dark secrets masked by the Bible and at the future that lies in wait. In a bid to investigate further Dominic undergoes the rite the church offers its members, which confers the ability to travel psychically through time. Before he’s able to flee back to the present he has a vision of the monstrous fate that’s in store for the world.

Dominic discovers a secret he’s sure the Nobles won’t want to be made public. Although he has retired from the police, Jim helps him establish the truth, and Roberta publishes it on her online blog. It’s the subject of a court case, the results of which seem to defeat the Nobles, only for them to return in a dreadfully transformed shape. Now Dominic and his friends are at their mercy, and is there anywhere in the world to hide? Even if they manage somehow to deal with the Nobles, there may be no escaping or preventing the alien apocalypse that all the events of the trilogy have been bringing ever closer...

"With The Way of the Worm, Campbell’s cosmic trilogy comes to a triumphant conclusion."

“A return to and a revisioning of some of his earliest imaginings, the trilogy is a kind of autobiography of its protagonist, in which his lifelong struggle with a supernatural agency occurs against the backdrop of post-war British history. The result is a magisterial work, though such a description scants the novels’ propulsive readability. It’s another remarkable achievement in a career full of them.”

"There is little doubt that Ramsey Campbell’s trilogy—for the three novels must be regarded as a tightly knit unity—will take its place among the stellar accomplishments in the realm of weird fiction. I struggle to find any trio of novels in our field that could match its achievement—an achievement that extends not merely to its deft portrayal of numerous characters over six decades and the impeccable elegance and mellifluousness of its prose, but above all to the grimly terrifying nature of its weird manifestations."

Praise for Books 1 and 2 in the trilogy:

?"This is Campbell at the height of his powers, proving once again that he is a master of the genre." — Publishers Weekly Starred Review of The Searching Dead, book 1

"A return to and a revisioning of some of his earliest imaginings, the trilogy is a kind of autobiography of its protagonist, in which his lifelong struggle with a supernatural agency occurs against the backdrop of post-war British history. The result is a magisterial work, though such a description scants the novels’ propulsive readability. It’s another remarkable achievement in a career full of them." — Locus Magazine Review of The Searching Dead, book 1

"This novel is not only the start of an awesome horror epic by a master, but also a compelling coming-of-age story about a budding writer finding his way in a terrifying world." — Library Journal Review of The Searching Dead, book 1

"I’m very much looking forward to the third and final installment of this excellent trilogy." — Horror Delve

"I highly recommend this trilogy for new Ramsey Campbell fans like myself. This seems like the best possible introduction to his body of work." — Sadie Hartmann for Cemetery Dance on Book 1

“An absolute master of modern horror. And a damn fine writer at that.” — Guillermo del Toro

“Good horror writers are quite rare, and Campbell is better than just good.” —Stephen King

“He is unsurpassed in the subtle manipulation of mood... You forget you’re just reading a story.” — Publishers Weekly

“One of the century’s great literary exponents of the gothic and horrific.” — The Guardian

“I would say that only five writers have written serious novels which incorporate themes of fantasy or the inexplicable and still qualify as literature: T. E. D. Klein, Peter Straub, Richard Adams, Jonathan Carroll and Ramsey Campbell." — Stephen King

“The most sophisticated and highly regarded of British horror writers.” — Financial Times

“He writes of our deepest fears in a precise, clear prose that somehow manages to be beautiful and terrifying at the same time. He is a powerful, original writer, and you owe it to yourself to make his acquaintance.” — Washington Post

“One of the few who can scare and disturb as well as make me laugh out loud. His humour is very black but very funny, and that’s a rare gift to have.” — Mark Morris, The Observer

“For sheer ability to compose disturbing, evocative prose, he is unmatched in the horror/fantasy field... He turns the traditional horror novel inside out, and makes it work brilliantly." — Fangoria

"He is a living legend whose name is mentioned in the same breadth as M.R. James, Arthur Machen and H.P. Lovecraft." — John Gilbert (Winner of British Fantasy Award, editor of FEAR magazine.)

"I can lose myself in a Ramsey Campbell story. I mean this literally. My world will not make sense. That the Ramsey Campbell I have known for almost forty years now is cheerful, affable, sensible, and profoundly sane, and in all ways a delight to know, does not lessen the effect of the fiction on me as a reader." — Neil Gaiman

“A horror writer in the classic mould... Britain’s premier contemporary exponent of the art of scaring you out of your skin.” — Q Magazine

“In Campbell’s hands words take on a life of their own, creating images that stay with you, feelings that prey on you, and people you hope never ever to meet.” — Starburst

“Ramsey Campbell is the nearest thing we have to an heir to M. R. James.” — Times

The Way of the Worm

More books in this series: The Three Births of Daoloth