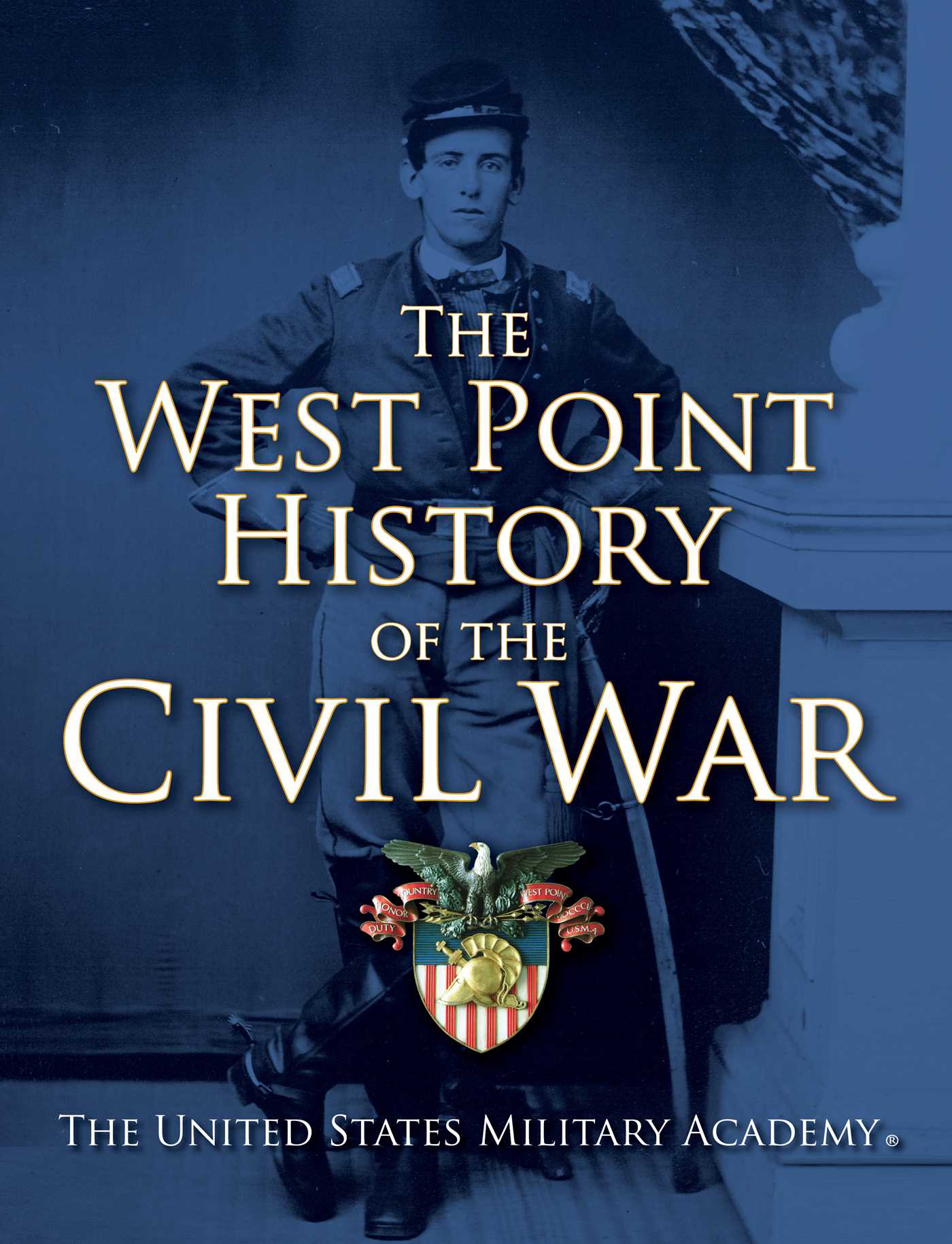 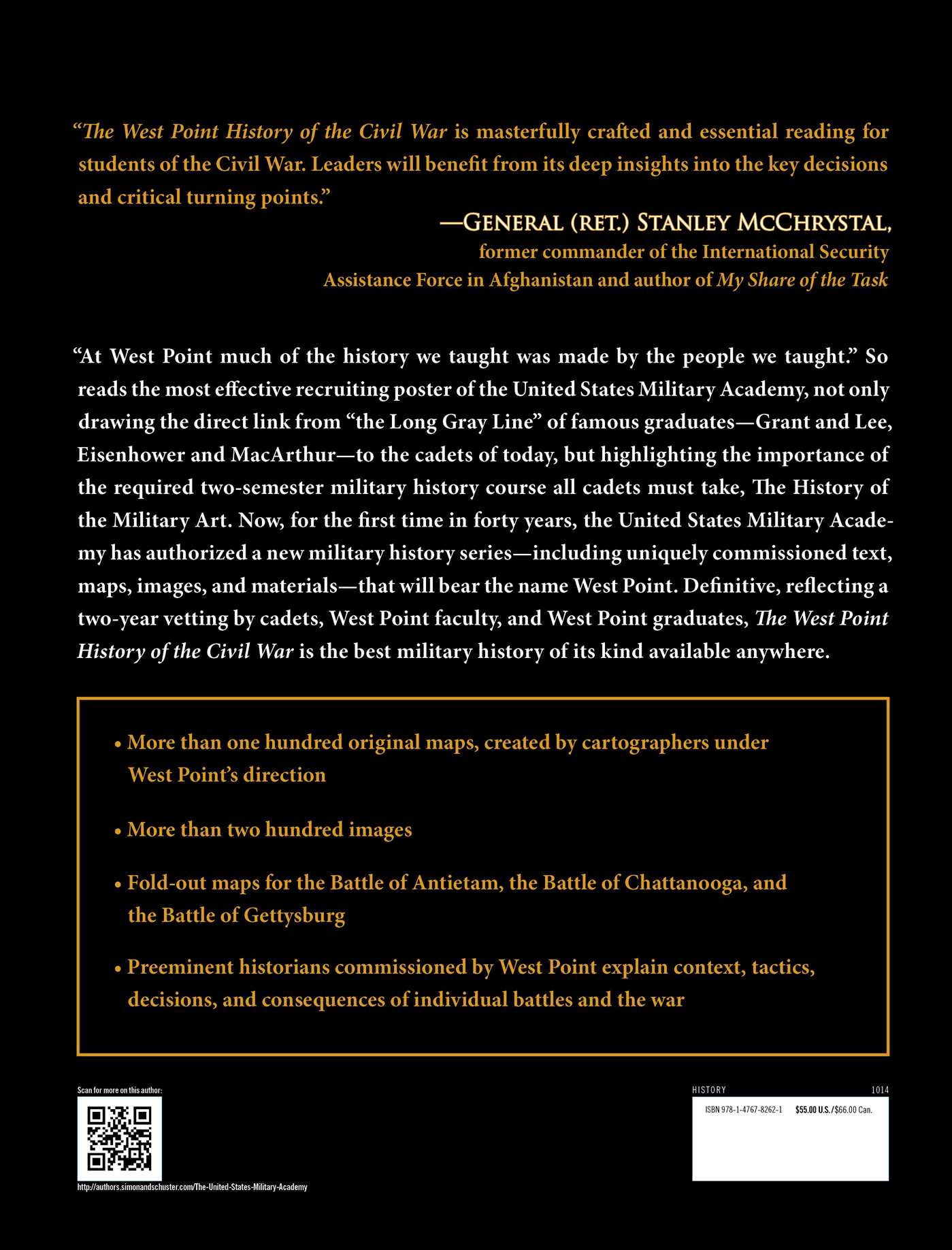 The West Point History of the Civil War

The definitive military history of the Civil War, featuring the same exclusive images, tactical maps, and expert analysis commissioned by The United States Military Academy to teach the history of the art of war to West Point cadets.

The West Point History of the Civil War combines the expertise of preeminent historians commissioned by West Point, hundreds of maps uniquely created by cartographers under West Point’s direction, and hundreds of images, many created for this volume or selected from West Point archives. Offering careful analysis of the political context of military decisions, The West Point History of the Civil War is singularly brilliant at introducing the generals and officer corps of both Union and Confederacy, while explaining the tactics, decisions, and consequences of individual battles and the ebb and flow of the war. For two years it has been beta-tested, vetted, and polished by cadets, West Point faculty, and West Point graduates and the results are clear: This is the best military history of its kind available anywhere.

The West Point History of the Civil War THE CIVIL WAR AT WEST POINT
The Civil War was the most traumatic event in the United States Military Academy’s history. During the 1850s, the Academy had changed from an institution that promoted nationalism to a bitterly divided school. In the early 1850s, James Ewell Brown “J. E. B.” Stuart praised the nationalizing effect of West Point, claiming that there was “no North or South” among the cadets. That soon changed, however. Peter Michie, who would later spend three decades teaching at West Point, arrived at the Military Academy as a cadet in 1859. He described how the corps of cadets split “into two parties, hostile in sentiment and even divided in barracks.”2 By November 1859, when abolitionist John Brown raided the arsenal at Harpers Ferry hoping to begin a massive slave uprising, the corps of cadets was no longer a unified body. Cadet Pierce Young from Georgia told several cadets, “By God, I wish I had a sword as long as from here to Newburgh, and the Yankees were all in a row. I’d like to cut off the head of every damn one of them.”3

Southern cadets became even more vocal before the 1860 presidential election, cowing cadets who supported Abraham Lincoln’s Republican ticket. Cadet George Custer reported that after the election in 1860, southern cadets burned the presidentelect in effigy as they looked to assail “Republican Abolitionists in the Corps.” One 1862 graduate who later fought at Gettysburg wrote that it took more courage to vote for Lincoln at West Point than it did to face Pickett’s Charge.4

West Point in 1860 was more violent and ill disciplined than at any other time in its history. Although few cadets were openly Republican, their number included Emory Upton, who would later become influential at the Academy and in the army. Upton was involved in one of the most famous brawls of that era, with Wade Hampton Gibbes from South Carolina. Gibbes resigned a few months later and fired one of the first shots of the Civil War at Fort Sumter. Gibbes accused Upton of “intimate association with negroes” while he was a student at Oberlin College, the first college in the country to admit African Americans. Upton was an avowed abolitionist, but nonetheless he found that assertion so offensive that he challenged the much larger Gibbes to a duel. Despite a deep cut on his face caused by a bayonet, the feisty Upton held his own during the brawl as southern cadets hurled abuse.5

One of the few openly abolitionist cadets, Upton fought with Wade Hampton Gibbes on the eve of the Civil War. He later became one of the best tactical commanders of the Civil War and among the most influential officers of the postwar era.

Henry C. Farley of South Carolina was the first cadet to leave West Point following Lincoln’s election, on November 19, 1860.6 By the summer of 1861, sixty-five of the eighty-six southern cadets had departed, often for high rank in the Confederate army.7 Louisiana-born and avowed secessionist Pierre Gustave Toutant Beauregard arrived at the Academy to assume duties as superintendent on January 23, 1861. He never decamped from the West Point Hotel; the new secretary of war, Joseph Holt, ordered the previous superintendent, Richard Delafield, to relieve Beauregard of his post after only five days. Holt rightly questioned Beauregard’s loyalty and did not want him to assume the superintendency and then resign his commission, taking cadets with him.8 Among the faculty, no senior professor resigned. Dennis Hart Mahan, the longest-serving member, stayed at West Point despite his Virginia roots.9 Although only 23 of the 155 officers assigned to the West Point faculty from 1833 to 1861 joined the Confederacy, the resignation of high-profile officers such as former superintendent Robert E. Lee left the Academy open to criticism.10

Prior to the mid-1850s, West Point had a nationalizing effect on the country. After 1855, cadets took control of the assignment process for the companies. Southerners went into two, and northerners went into the other two. Even on parade, the two sides began to separate.

While the internal trauma was terrible, the external attacks were even more dangerous to West Point. President Lincoln and Secretary of War Simon Cameron criticized West Point because so many of its graduates left the U.S. Army to fight for the Confederates. Radical Republican senators railed against the Academy and twice brought a vote to the floor of Congress to stop all funding to West Point and close the Military Academy. Senators argued that West Point was an incubator for secession and treason, and that it produced an aristocratic caste of officers to the detriment of volunteer citizen-soldiers. Senator Zachariah Chandler of Michigan declared that he “was prepared to abolish West Point Academy. I believe that but for this institution the rebellion would never have broken out.” Senator Benjamin Wade of Ohio believed that a string of southern secretaries of war and Military Academy superintendents had so deeply molded the culture of the Academy that “you can hardly find a graduate of West Point who is not heartily now the supporter of southern institutions . . . the whole batch were imbued with the southern secession doctrine.” Not only did he denounce the “perjured traitors” who had resigned their commissions and gone to serve the Confederacy, he worried that hundreds of other graduates who had remained in Union blue were “treacherous and rotten at the heart, and . . . doing us infinitely more mischief than any number of them who have turned and resigned their commissions.” While most loyal officers thought such attacks were unfair, many did believe that the cadets and officers educated and nurtured at West Point who left for the Confederacy were traitors who brought shame to the Academy.
The United States Military Academy

The United States Military Academy at West Point is a four-year federal service academy established in 1802 to educate and train students as future officers in the military. Since 1836, West Point has published and frequently updated for its cadets definitive military history texts, now including The West Point History of Warfare series, the most important and insightful overview of military history to date.

"The West Point History of the Civil War is masterfully crafted and essential reading for students of the civil war. Leaders will benefit from its deep insights into the key decisions and critical turning points."

– General (ret.) Stan McChrystal, former commander of the International Security Assistance Force in Afghanistan and author of My Share of the Task

This is a lavishly illustrated and superbly written survey of the origins, course, and legacy of our national trial by fire. . . . The text is admirably supported by photographs, highly informative maps and charts, and excellent images of artifacts. . . . This outstanding work can serve as an ideal introduction to the topic for general readers."

"Assembles contributions from five of the country's most distinguished historians of the Civil War. . . . Provides a richness of political context as well as showing how the war was transformed from an initial defense of the Union to a war for emancipation."

The West Point History of the Civil War

More books from this author: The United States Military Academy

More books in this series: The West Point History of Warfare Series