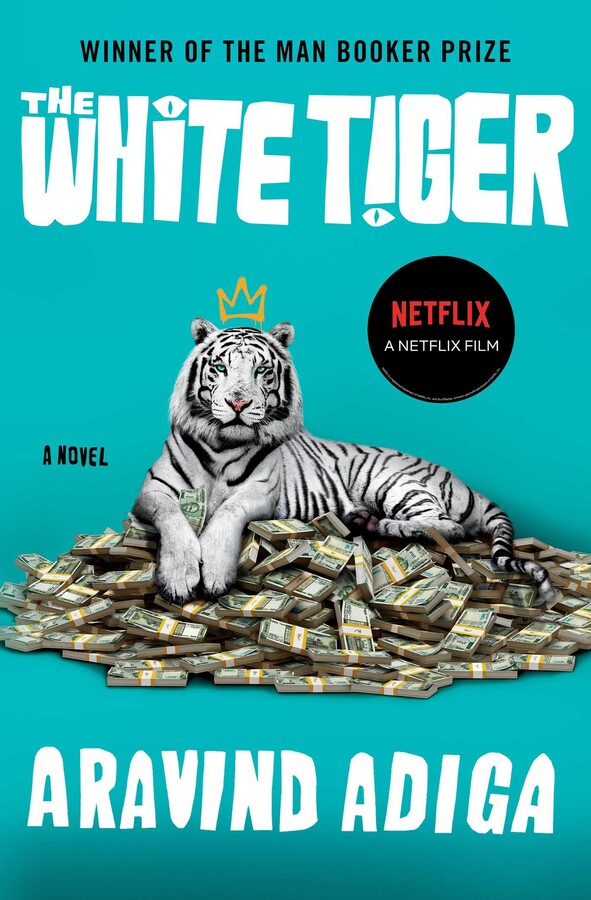 By Aravind Adiga
LIST PRICE $11.99
PRICE MAY VARY BY RETAILER

The stunning Booker Prize–winning novel from the author of Amnesty and Selection Day that critics have likened to Richard Wright’s Native Son, The White Tiger follows a darkly comic Bangalore driver through the poverty and corruption of modern India’s caste society. “This is the authentic voice of the Third World, like you've never heard it before” (John Burdett, Bangkok 8).

The white tiger of this novel is Balram Halwai, a poor Indian villager whose great ambition leads him to the zenith of Indian business culture, the world of the Bangalore entrepreneur. On the occasion of the president of China’s impending trip to Bangalore, Balram writes a letter to him describing his transformation and his experience as driver and servant to a wealthy Indian family, which he thinks exemplifies the contradictions and complications of Indian society.

Recalling The Death of Vishnu and Bangkok 8 in ambition, scope, The White Tiger is narrative genius with a mischief and personality all its own. Amoral, irreverent, deeply endearing, and utterly contemporary, this novel is an international publishing sensation—and a startling, provocative debut.

1. The author chose to tell the story from the provocative point of view of an exceedingly charming, egotistical admitted murderer. Do Balram's ambition and charisma make his vision clearer? More vivid? Did he win you over?
2. Why does Balram choose to address the Premier? What motivates him to tell his story? What similarities does he see between himself and the Premier?
3. Because of his lack of education, Ashok calls Balram "half-baked." What does he mean by this? How does Balram go about educating himself? What does he learn?
4. Balram variously describes himself as "a man of action and change," "a thinking man," "an entrepreneur," "a man who sees tomorrow," and a "murderer." Is any one of these labels the most fitting, or is he too complex for only one? How would you describe him?
5. Balram blames the culture of servitude in India for the stark contrasts between the Light and the Darkness and the antiquated mind set that slows change. Discuss his rooster coop analogy and the role of religion, the political system, and family life in perpetuating this culture. What do you make of the couplet Balram repeats to himself: "I was looking for the key for years / but the door was always open"?
6. Discuss Balram's opinion of his master and how it and their relationship evolve. Balram says "where my genuine concern for him ended and where my self-interest began, I could not tell" (160). Where do you think his self-interest begins?
7. Compare Ashok and his family's actions after Pinky Madam hits a child to Balram's response when his driver does. Were you surprised at the actions of either? How does Ashok and his family's morality compare to Balram's in respect to the accidents, and to other circumstances?
8. Discuss Balram's reasons for the murder: fulfilling his father's wish that his son "live like a man," taking back what Ashok had stolen from him, and breaking out of the rooster coop, among them. Which ring true to you and which do not? Did you feel Balram was justified in killing Ashok? Discuss the paradox inherent in the fact that in order to live fully as a man, Balram took a man's life.
9. Balram's thoughts of his family initially hold him back from killing Ashok. What changes his mind? Why do you think he goes back to retrieve Dharam at the end of the novel? Does his decision absolve him in any way?
10. The novel offers a window into the rapidly changing economic situation in India. What do we learn about entrepreneurship and Balram's definition of it?
11. The novel reveals an India that is as unforgiving as it is promising. Do you think of the novel, ultimately, as a cautionary tale or a hopeful one?
Further activities
The novel offers a perspective on modern India and how its economy is changing. Compare the fictional depiction in the book to nonfiction accounts; for further reading try In Spite of the Gods, Planet India, or The Elephant and the Dragon.
If you or your group has read other popular novels related to India, such as The Namesake, The Inheritance of Loss, or Brick Lane, discuss the characters and the similarities or differences you see in how the country is presented.
Have an Indian feast to accompany your book group discussion. Order from a local restaurant or try your hand at the recipes at www.indianfoodforever.com.

Aravind Adiga was born in India in 1974 and attended Columbia and Oxford universities. He is the author of the novels Amnesty; Selection Day, now a series on Netflix; The White Tiger, which won the Man Booker Prize; and the story collection Between the Assassinations. He lives in Mumbai, India.

By Aravind Adiga
LIST PRICE $11.99
PRICE MAY VARY BY RETAILER