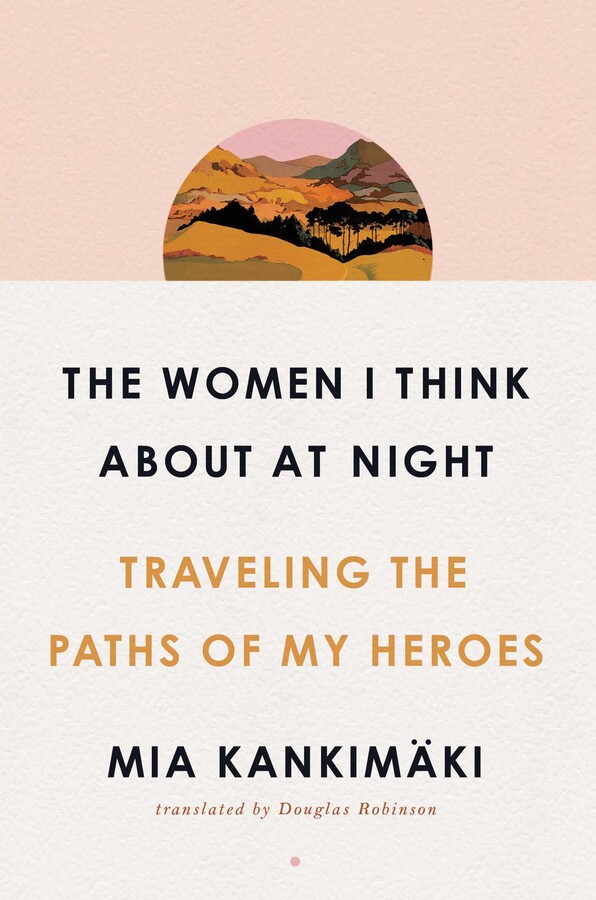 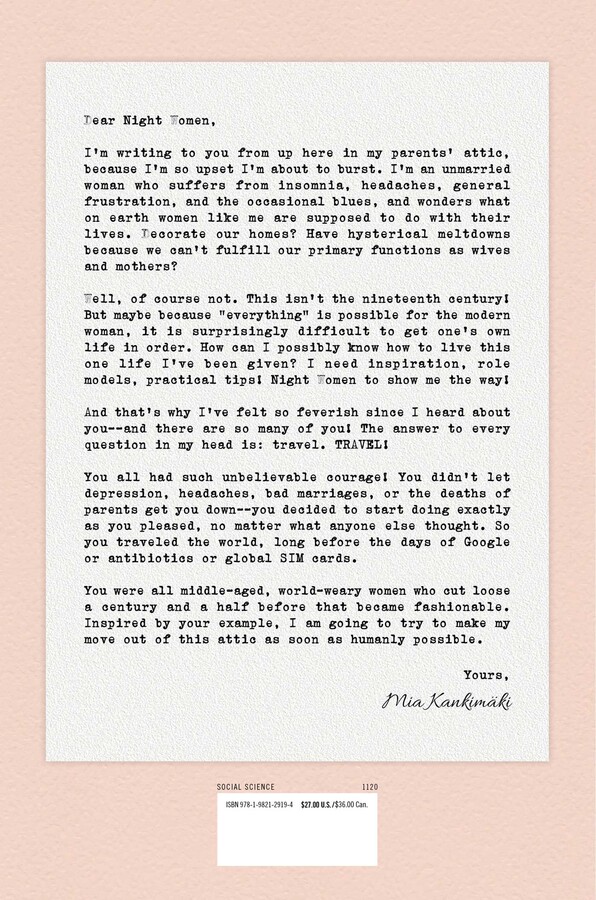 The Women I Think About at Night

Traveling the Paths of My Heroes

In The Women I Think About at Night, Mia Kankimäki blends travelogue, memoir, and biography as she recounts her enchanting travels in Japan, Kenya, and Italy while retracing the steps of ten remarkable female pioneers from history.

What can a forty-something childless woman do? Bored with her life and feeling stuck, Mia Kankimäki leaves her job, sells her apartment, and decides to travel the world, following the paths of the female explorers and artists from history who have long inspired her. She flies to Tanzania and then to Kenya to see where Karen Blixen—of Out of Africa—fame lived in the 1920s. In Japan, Mia attempts to cure her depression while researching Yayoi Kusama, the contemporary artist who has voluntarily lived in a psychiatric hospital for decades. In Italy, Mia spends her days looking for the works of forgotten Renaissance women painters of the Uffizi Gallery in Florence, and finally finds her heroines in the portraits of Sofonisba Anguissola, Lavinia Fontana, and Artemisia Gentileschi. If these women could make it in the world hundreds of years ago, why can’t Mia?

The Women I Think About at Night is part travelogue and part thrilling exploration of the lost women adventurers of history who defied expectations in order to see—and change—the world.

I’ve thought about women on those sleepless nights when my life, my love, or my attitude is skewed, and it seems there is no end to the dark night of my soul. On those nights I have gathered an invisible honor guard of historical women, guardian angels to lead the way.

The lives of these inspiring night women have not followed traditional paths. They have transgressed boundaries and expectations. Many of them are artists and writers, people doing lonely, introverted work. Most have not had families or children, and their relationships with men have been unconventional. Many have traveled in or moved to foreign countries, and made massive life changes at an advanced age. Some have lived with their mothers their entire lives; some have suffered from diseases and mental disorders; but all of them have followed their passions and made their own choices. These exemplary women have been my plan B—the one I’ll adopt if everything else goes to hell.

One of the women is Sei Shonagon, a writer and court lady who lived a thousand years ago in Kyoto, about whom I wrote my first book. But there are many others. Some nights I lie awake thinking about Frida Kahlo, whose biography I read when I was eighteen. It transformed how I thought about womanhood. Other nights I think about Georgia O’Keeffe, who wound up alone in the New Mexico desert painting buffalo skulls and making her first trip around the world when she was in her seventies. I think about Yayoi Kusama, a Japanese woman who, deciding to become an artist, wrote to Georgia O’Keeffe to ask her advice, and later, after shaking up the New York art world in the sixties, returned to Tokyo and asked to be allowed to live in a psychiatric hospital. I think of Karen Blixen, who followed her husband to Africa and ended up running a farm on her own. I think of Jane Austen, who, though she lived unmarried in her parents’ attic in the English countryside, transformed the art of the novel. I think of the poet-artist Ema Saiko, who lived in Japan in the Edo period. It is her calm that finally brings sleep to the dark night of my soul.

I wonder where these women found their courage. What advice would they give me, if we could meet? And above all: Could I go exploring in their footsteps?

I’ve been on that journey for some time now. And the amazing thing is that I keep finding more and more forgotten night women who churn up my imagination, an ever-expanding network of women who lived in different centuries and different corners of the world, slicing the waves through my brain. They are Marys, Karens, Idas, Nellies, Marthas, Alexines, Sofonisbas, Battistas—they are writers, artists, explorers, depressed spinsters, war correspondents, wives of Renaissance aristocrats.

They are the women I think about at night. At first I thought about them on sleepless nights, in search of strength, inspiration, and purpose for my life; nowanights I stay up specially to think about them, my pulse pounding for them and with them. Why have they come to me, clung to me, swept me up in their lives? Why have I surrounded my desk with their faces? Why do books about them pile ever higher on my floor? Why do I collect facts about them like talismans?

Let me start at the beginning, one picture at a time.

But first let me pack my bag. I have a flight leaving soon. 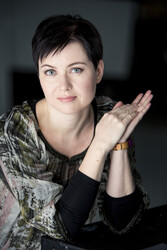 Mia Kankimäki has worked with books all her life: she has a master’s degree in comparative literature from the University of Helsinki, and she has worked as a copywriter and editor at various publishing houses. Her travels in Tanzania, Kenya, Italy, and Japan in the footsteps of inspirational, historical female figures inspired her book The Women I Think About at Night. When not traveling for her next book project, Mia Kankimäki lives in Helsinki, Finland.

"[A]stute, entertaining....This insightful book will appeal to adventure enthusiasts and be an inspiration for those with an eye on hitting their stride later in life."--Publisher's Weekly

"A thought-provoking blend of history, biography, women’s studies, and travelog, this should appeal to readers interested in any of these subjects, and those who love eclectic narrative nonfiction."--Library Journal

"The stories are complicated and inspiring, and Kankimäki’s experience unwinding each one to help understand her own life reminds us of the power of using travel for self-discovery."--TRAVEL + LEISURE

The Women I Think About at Night

Traveling the Paths of My Heroes