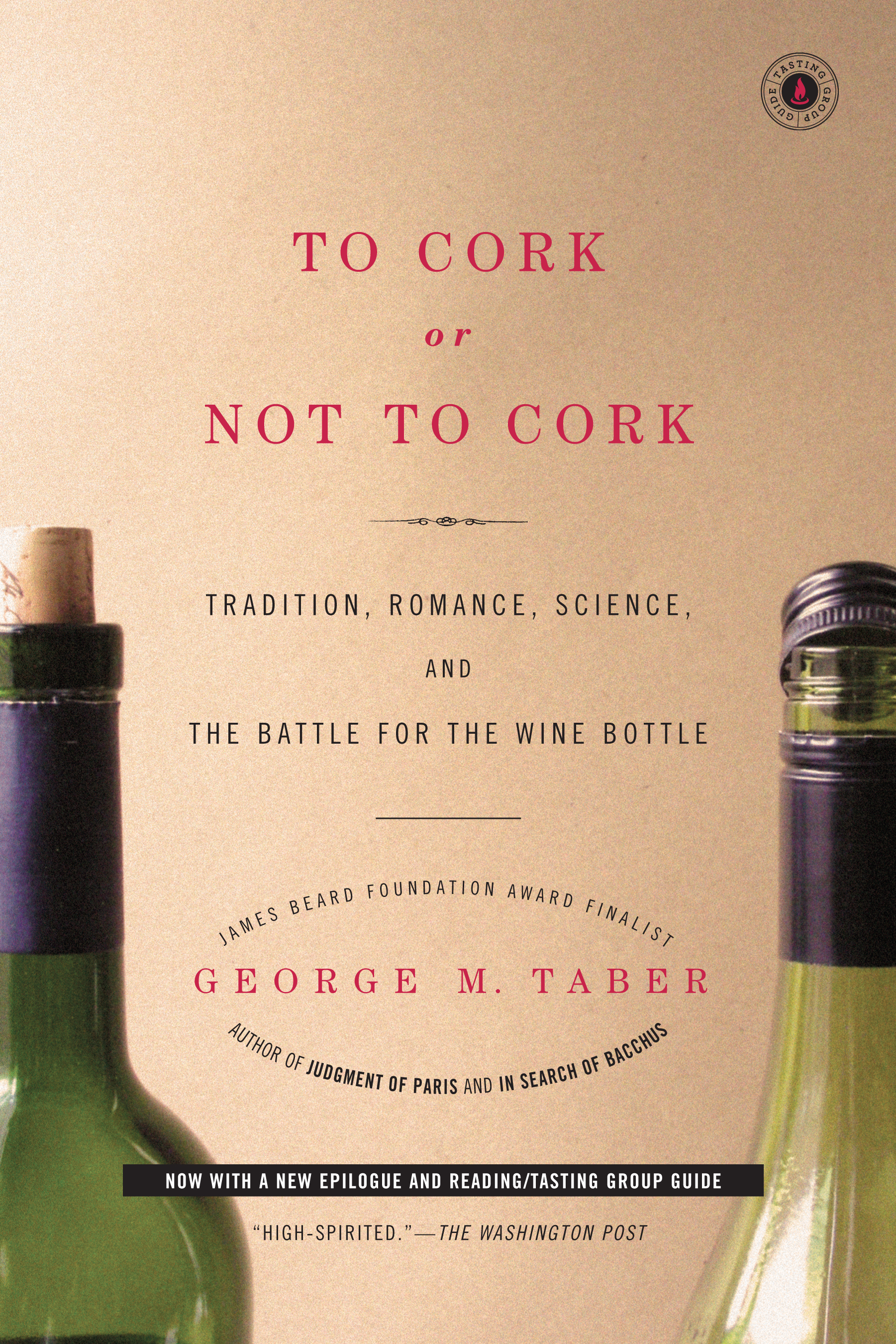 In Judgment of Paris, George M. Taber masterfully chronicled the historic 1976 wine tasting when unknown California wines defeated top French ones, marking a major turning point in wine history. Now he explores the most controversial topic in the world of wine: What product should be used to seal a bottle? Should it be cork, plastic, glass, a screwcap, or some other type of closure still to be invented?

For nearly four centuries virtually every bottle of wine had a cork in it. But starting in the 1970s, a revolution began to topple the cork monopoly. In recent years, the rebellion has been gathering strength. Belatedly, the cork industry began fighting back, while trying to retain its predominant position. Each year 20 billion closures go onto wine bottles, and, increasingly, they are not corks.

The cause of the onslaught against cork is an obscure chemical compound known as TCA. In amounts as low as several parts per trillion, the compound can make a $400 bottle of wine smell like wet newspaper and taste equally bad. Such wine is said to be "corked." While cork's enemies urge people to throw off the old and embrace new closures, millions of wine drinkers around the world are still in love with the romance of the cork and the ceremony of opening a bottle.

With a thorough command of history, science, winemaking, and marketing, Taber examines all sides of the debate. Along the way, he collects a host of great characters and pivotal moments in the production, storage, and consumption of wine, and paints a truly satisfying portrait of a wholly intriguing controversy. As Australian winemaker Brian Croser describes it: "It's scary how passionate people can be on this topic. Prejudice and extreme positions have taken over, and science has often gone out the window."

TO CORK OR NOT TO CORK PROLOGUE
The David Bruce Winery has long made one of America’s most prestigious Chardonnays. Founder David Bruce, a California wine pioneer, was originally trained as a medical doctor with a specialty in dermatology. His real passion, though, was making wine, and for years after starting his own winery in 1961 he practiced medicine by day so that by night and on weekends he could make wine. He only retired from medicine and became a full-time winemaker in 1985. Bruce’s vineyards are in the Santa Cruz Mountains south of San Francisco. Early on, he became convinced that his cool, western side of the mountain range facing the Pacific Ocean was ideally suited to making wines in the style of Burgundy—fruity Chardonnays and elegant Pinot Noirs that reach their peak after five or six years. Paul Masson, one of the first winemakers in the area, called it the Chaîne d’Or because of the similarity he saw to Burgundy’s Cô te d’Or, where Chardonnays and Pinot Noirs excel. Bruce in the 1980s easily sold out his annual production of some twenty thousand cases of Chardonnay and an additional ten thousand of Pinot Noir and regularly won awards for both wines.

In the fall of 1987, Bruce was about to begin the harvest when he started getting reports from his distributor, the San Francisco Wine Exchange, that stores were returning an unusually high number of Chardonnay bottles with complaints that the wine had cork taint. As a winemaker for more than two decades, Bruce was familiar with the problem of random bottles acquiring a musty odor resembling wet newspapers or moldy cardboard. At the time, winemakers and wine drinkers considered getting a “corked” bottle just a minor annoyance in a field they loved. Bruce, along with other winemakers around the world, didn’t know what caused taint or whether anything could be done to stop it. Since they felt helpless, they just lived with the problem and made few attempts to control the quality of their cork.

Anywhere from 3 to 5 percent of bottles supposedly had the off taste. Cork taint poses no health threat to the consumer, but it can still ruin a wine experience. Today the purpose of the ritual of tasting a little wine from a bottle in a restaurant before accepting it is to see whether the wine is corked. To cork’s critics, the failure rate is both outrageous and unacceptable. They repeatedly argue that if 3 to 5 percent of Toyota cars or IBM computers failed, those companies would be out of business.

Another problem caused by corks is random oxidation. Just as an apple or a pear left out on a kitchen countertop turns brown and develops a woody taste, wines can also go bad if excessive air gets into the bottle. Corks that seal imperfectly cause oxidation. No one knows how often it happens, but since cork is a natural product and no two corks—just as no two snowflakes—are exactly alike, it occurs from time to time. Some wine experts consider random oxidation to be an even worse problem than corkiness. Oxidation takes place when wine is exposed to excessive air, sometimes through a malfunctioning cork, and is most obvious in white wines, which can turn amber or brown and take on a woody taste. It’s the same phenomenon that happens when a cut apple turns brown after being exposed to air. Random oxidation, though, did not seem to be the problem with the David Bruce Chardonnay.

Shortly after the distributor sent those early warnings came the avalanche. From all over the country more and more bottles of the Chardonnay were returned. The explanation was always the same: the wine had cork taint. The staff of the David Bruce tasting room were also noting a lot of bad bottles. A shocking seven of the twelve bottles in a case were often affected. “We got returns after returns after returns,” Bruce says with a pain he still feels today.

Bruce knew that he had a disaster on his hands. His first reaction was to pull back as much of the Chardonnay as he could, but he was only able to retrieve about seven thousand cases—at a cost to him of $400,000. That left some thirteen thousand cases out in the marketplace destroying his winery’s reputation one bottle at a time, as an unknown number of consumers, who might not be able to determine exactly what was wrong with the wine except that they didn’t like it, turned away from David Bruce Chardonnay.

The David Bruce Winery got its corks from Portugal, the world’s leading producer. When he checked around the California wine fraternity, Bruce heard that such large wineries as Robert Mondavi, Inglenook, Gallo, and Beaulieu Vineyard were rejecting a significant share of their corks because of taint problems. Bruce concluded that cork suppliers were probably not shipping those back to Portugal but passing them along to another winery in a game akin to old maid. He figured he had been stuck with tainted corks that other wineries had rejected. Once the corks were his property, they were his problem. He had no recourse.

The 1987 cork disaster ultimately cost Bruce $2 million in lost business and an inestimable amount of lost customer loyalty. “We didn’t have any money in those days,” he recalls ruefully. In a final attempt to rescue at least a little from the catastrophe, the winery owner sold the returned wine to the discount retailer Trader Joe’s for $1 a bottle. “That was a terrible mistake, since our label was still on the bottles. I may have gotten a few dollars for them, but it put the nail in the coffin, at least temporarily, by telling consumers that they couldn’t trust David Bruce with Chardonnay.” Bruce says it took him years to win back the customers. “The market has a very long memory,” he still laments. As a result of the cork-taint problem, the winery was almost forced out of the Chardonnay business and had to turn its attention more to Pinot Noir.

David Bruce was the victim of 2,4,6-trichloroanisole, a chemical compound that has been around for centuries but had only been identified six years before in Switzerland. TCA, as it is commonly known, is one of the most intensely aromatic substances in the world. Just one teaspoon of it is enough to taint the entire annual American wine production. An expert wine taster can note cork taint when only one part per trillion is present in a wine, and an average consumer will usually detect it at about 5 parts per trillion. One part per trillion is the equivalent of one second in 320 centuries! But it’s enough to ruin a bottle of wine.

For nearly four hundred years, corks like the ones that failed David Bruce have been almost the exclusive way to close a wine bottle. But because Bruce’s problem has been repeated so many times at so many wineries, today cork is challenged as never before. The world of wine is now embroiled in an often highly emotional multibillion-dollar battle for the bottle. Says Brian Croser, one of Australia’s leading winemakers, “It’s scary how passionate people can be on this topic. Prejudice and extreme positions have taken over, and science has often gone out the window.” 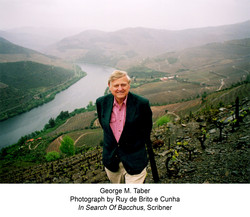 George M. Taber is the author of Judgment of Paris, the 2006 wine book of the year for Britain's Decanter magazine. His second book, To Cork or Not to Cork, won the Jane Grigson Award from the International Association of Culinary Professionals and was a finalist for the James Beard Foundation Award for best book on wine and spirits and the Andre Simon Award for best wine book. Before turning to writing wine books, Taber was a reporter and editor for Time.

"Fascinating...This discussion not only is relevant to today's wine producers and enthusiasts but will continue to stimulate interest until the 'perfect' bottle closure is developed. Highly recommended, especially in wine-producing and -consuming areas."
- -- Library Journal (starred review)

"In 'To Cork or Not To Cork,' Mr. Taber does an able job of telling the story of the cork industry's early history, its rise to global monopoly status and the recent search for alternatives. "

"'To Cork or Not To Cork' reads like a novel. While the book contains some scientific terminology and at times appears to be highly technical, even a non-scientist can understand it, and it's an easy and fascinating read."
-- Napa Valley Register

"No matter where you stand on the great debate over corks -- love 'em, hate 'em, or still undecided -- To Cork or Not to Cork: Tradition, Romance and the Battle for the Wine Bottle by George M. Taber, gives the subject a timely and thorough examination. Taber is a good storyteller and the book reads and flows easily."

"Taber is well-qualified to tell the story. He was the Time magazine correspondent on the scene in Paris for the 1976 blind tasting that proved American wines could not only hold their own but beat the best of the French. His 2005 book on the tasting, 'Judgment of Paris,' is the theme for two movies now in preproduction."