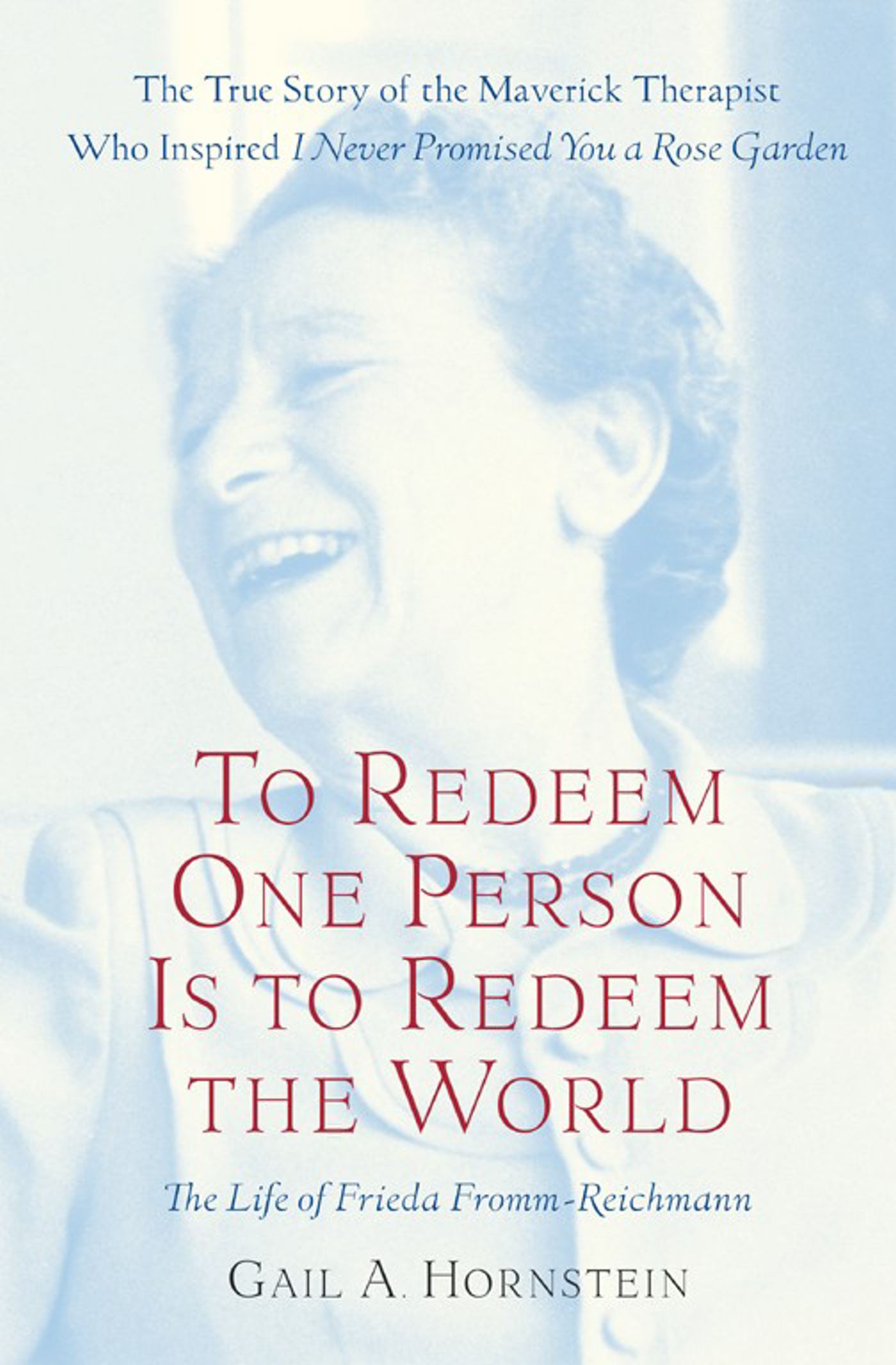 To Redeem One Person Is to Redeem the World

A Life of Frieda Fromm-Reichmann

By Gail A. Hornstein
LIST PRICE $16.99
PRICE MAY VARY BY RETAILER

In this marvelously researched and moving biography closely grounded in Frieda Fromm-Reichmann's work, Gail Hornstein brings back to life the maverick psychiatrist who accomplished what Freud and almost everyone else thought impossible: successfully treating schizophrenics and other seriously disturbed mental patients with intensive psychotherapy, not lobotomy, shock treatment, or drugs.
To Redeem One Person Is to Redeem the World tells the extraordinary life story of the German-Jewish refugee analyst, who was the first wife of Erich Fromm. Written with unprecedented access to a rich archive of Frieda Fromm-Reichmann's clinical work at the legendary Chestnut Lodge Hospital in Rockville, Maryland, and using newly discovered family records and documents from across Europe and the United States, this is the definitive biography of a remarkable woman.
Best known to millions as the courageous therapist in I Never Promised You a Rose Garden, Joanne Greenberg's bestselling chronicle of madness and recovery, Fromm-Reichmann (1889-1957) is a fascinating and controversial figure in twentieth-century psychiatry. To Redeem One Person Is to Redeem the World traces the story of her life and education, from a loving childhood as the eldest of three daughters in an Orthodox Jewish family to medical school at seventeen, as one of the first women admitted to study at a Prussian university.
During World War I, Fromm-Reichmann took charge of a military hospital in Königsberg, transforming it into a pioneering center for the treatment of brain injury. By her mid-thirties, she had opened her own psychiatric sanitarium in Heidelberg, where she and her staff put into practice a unique and hopeful integration of psychotherapy and tikkun, the Jewish ethical principle that every person is worth saving. At thirty-six, she had an affair with and then married her patient, Erich Fromm, later the celebrated author of Escape from Freedom, The Art of Loving, and other psychological classics. Her close friends and colleagues in pre-World War II Germany included some of the most visionary intellectuals and therapists of the era: Martin Buber, Karen Horney, Franz Rosenzweig, Gershom Scholem, and Georg Groddeck, among others.
Hornstein recounts Fromm-Reichmann's dramatic escape from Nazi Germany, exile in France and Palestine, and her flight to the United States, where she found asylum at a tiny hospital outside Washington, D.C. Over the following decades, Fromm-Reichmann would emerge as the most distinguished figure at Chestnut Lodge, a mental hospital unlike any other -- intellectually radical, yet filled with warm family feeling and deeply respectful of individual difference. Fromm-Reichmann was not only pivotal in creating a beacon of hope at Chestnut Lodge, which stood alone as the place where the sickest patients could go to be cured. She was also a maverick in her field -- the only prominent woman analyst of her day to write about schizophrenia, not femininity or children. And she had little interest in the arcane theoretical disputes that obsessed most of her colleagues; curing patients was her consuming goal.
As the pendulum swings back from psychiatry's addiction to drugs as the sole treatment for mental illness, Fromm-Reichmann's breadth of vision makes this biography of a heroic, yet all-too-human, woman a timely and compelling work.

Joanne Greenberg author of I Never Promised You a Rose Garden Just when we need it most, Gail Hornstein vividly re-creates Frieda Fromm-Reichmann's vision of psychiatry as a healing art. The story of this remarkable woman will inspire patients and families struggling with mental illness and anyone else in need of Fromm-Reichmann's greatest legacy -- hope. Hornstein succeeds on every level: the writing is supple, the questions are precisely the right ones, the book is deep without being obscure, and it is thrillingly honest.

Robert Coles Harvard University, and Pulitzer Prize-winning author This book tells of the pioneering work accomplished by one of the greatest of Freud's followers -- a brilliant and knowing clinician who gave herself, heart and soul, to her exceedingly vulnerable patients to the point that her psychological wisdom, offered under difficult clinical circumstances, became, over time, a courageous clinical witness: a kind of psychoanalytic soulfulness that has inspired so many of us these past years.

Kay Redfield Jamison Johns Hopkins School of Medicine, and author of Night Falls Fast and An Unquiet Mind This is a superb biography of an innovative, pioneering, and controversial woman. Fromm-Reichmann, often for the good and occasionally to the detriment, left a deep and original mark on how we think about the treatment of severe mental illness. Hornstein has captured her complexities with astuteness and refreshing clarity.

Jean Baker Miller Wellesley College and Boston University School of Medicine, and author of Toward a New Psychology of Women This wonderful story of Frieda Fromm-Reichmann will be an eye-opener to those who think of the psychiatry and psychoanalysis of today as narrow and uninspired. Courageously going where others feared, trying to find the ways to work with those who others cast aside, she was an inspiration to many of us. And we can still learn from her profound understandings. Marvelous...Gail Hornstein's book is a pleasure to read.

Alix Kates Shulman author of Memoirs of an Ex-Prom Queen and A Good Enough Daughter In clear, graceful prose Gail Hornstein presents the life of a legendary psychoanalyst from the heyday of the movement. This engaging narrative is studded with fascinating cases and thoughtful reflections on the embattled history of psychiatric treatments in the United States.

To Redeem One Person Is to Redeem the World

A Life of Frieda Fromm-Reichmann

By Gail A. Hornstein
LIST PRICE $16.99
PRICE MAY VARY BY RETAILER