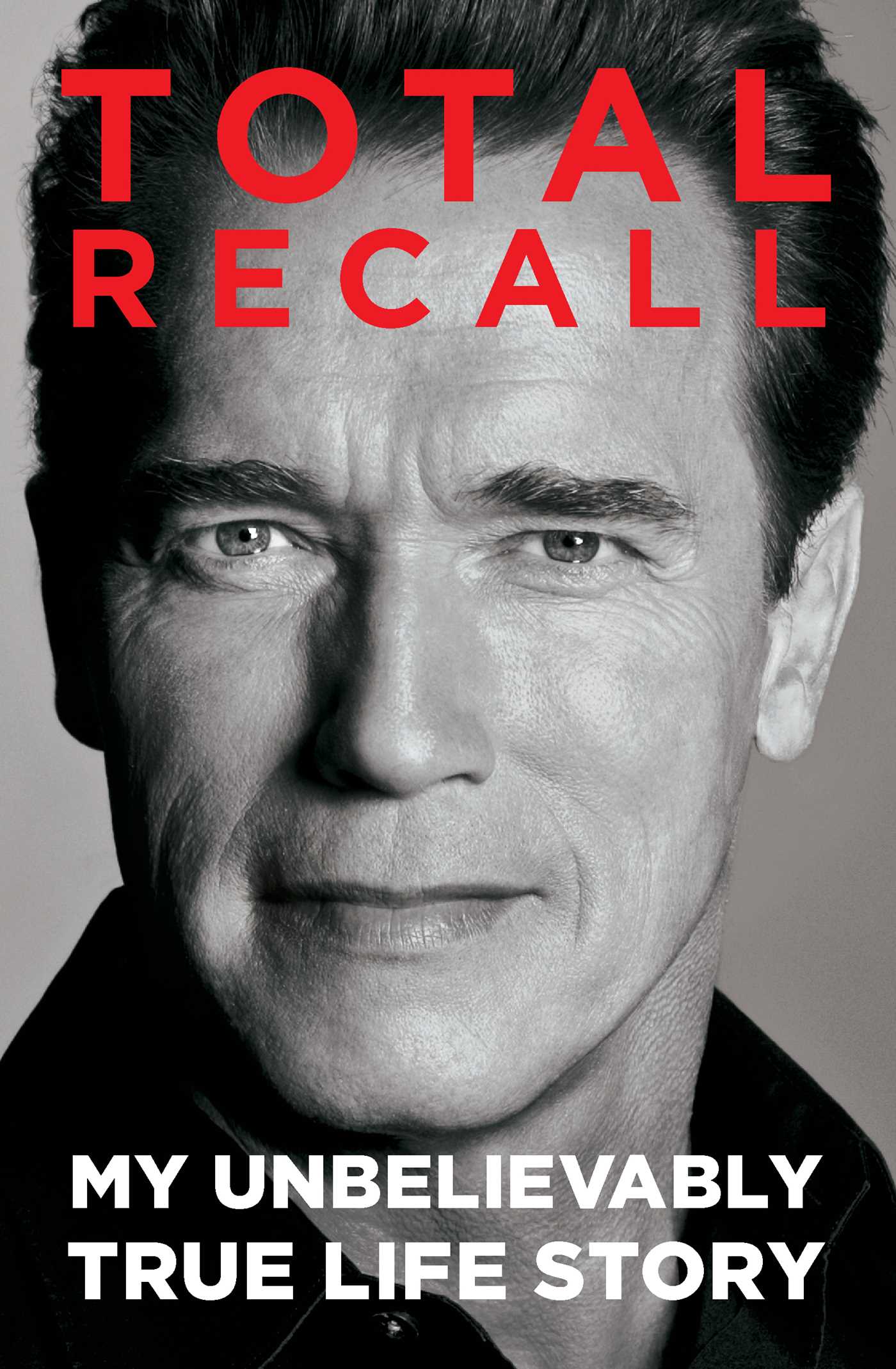 In his signature larger-than-life style, Arnold Schwarzenegger’s Total Recall is a revealing self-portrait of his illustrious, controversial, and truly unique life.

The greatest immigrant success story of our time.

His story is unique, and uniquely entertaining, and he tells it brilliantly in these pages.

He was born in a year of famine, in a small Austrian town, the son of an austere police chief. He dreamed of moving to America to become a bodybuilding champion and a movie star.

By the age of twenty-one, he was living in Los Angeles and had been crowned Mr. Universe.

Within five years, he had learned English and become the greatest bodybuilder in the world.

Within ten years, he had earned his college degree and was a millionaire from his business enterprises in real estate, landscaping, and bodybuilding. He was also the winner of a Golden Globe Award for his debut as a dramatic actor in Stay Hungry.

Within twenty years, he was the world’s biggest movie star, the husband of Maria Shriver, and an emerging Republican leader who was part of the Kennedy family.

Thirty-six years after coming to America, the man once known by fellow body­builders as the Austrian Oak was elected governor of California, the seventh largest economy in the world.

He led the state through a budget crisis, natural disasters, and political turmoil, working across party lines for a better environment, election reforms, and bipartisan solutions.

With Maria Shriver, he raised four fantastic children. In the wake of a scandal he brought upon himself, he tried to keep his family together.

Until now, he has never told the full story of his life, in his own voice.

Here is Arnold, with total recall.

I was born into a year of famine. It was 1947, and Austria was occupied by the Allied armies that had defeated Hitler’s Third Reich. In May, two months before I was born, there were hunger riots in Vienna, and in Styria, the southeastern province where we lived, the food shortages were just as bad. Years later, if my mother wanted to remind me about how much she and my father sacrificed to bring me up, she’d tell me how she’d foraged across the countryside, making her way from farm to farm to collect a little butter, some sugar, some grain. She’d be away three days sometimes. Hamstern, they called it, like a hamster gathering nuts; scrounging for food was so common.

Thal was the name of our very typical farm village. A few hundred families made up the entire population, their houses and farms clustered in hamlets connected by footpaths and lanes. The unpaved main road ran for a couple of kilometers up and down low alpine hills covered with fields and pine forests.

We saw very little of the British forces who were in charge—just an occasional truck with soldiers rolling through. But to the east, Russians occupied the area, and we were very conscious of them. The Cold War had begun, and we all lived in fear that the Russian tanks would roll in, and we’d be swallowed up into the Soviet empire. The priests in church would scare the congregation with horror stories of Russians shooting babies in the arms of their mothers.

Our house was on the top of a hill along the road, and as I was growing up, it was unusual to see more than one or two cars come through a day. A ruined castle dating back to feudal times was right across from us, one hundred yards from our door.

On the next rise were the mayor’s office; the Catholic church where my mother made us all go to Sunday Mass; the local Gasthaus, or inn, which was the social heart of the village; and the primary school attended by me and my brother, Meinhard, who was a year older than me.

My earliest memories are of my mother washing clothes and my father shoveling coal. I was no more than three years old, but the image of my father is especially sharp in my mind. He was a big, athletic guy, and he did a lot of things himself. Every autumn we’d get our winter supply of coal, a truckload dumped in front of our house, and on this occasion he was letting Meinhard and me help him carry it into the cellar. We were always so proud to be his assistants.

My father and mom both originally came from working-class families farther north—factory laborers, mostly, in the steel industry. During the chaos at the end of World War II, they’d met in the city of Mürzzuschlag, where my mother, Aurelia Jadrny, was a clerk in a food-distribution center at city hall. She was in her early twenties, and a war widow—her husband had gotten killed just eight months after their wedding. Working at her desk one morning, she noticed my father passing on the street—an older guy, in his late thirties, but tall and good looking and wearing the uniform of the gendarmerie, the rural police. She was crazy about men in uniforms, so every day after that she watched for him. She figured out when his shift was so she would be sure to be at her desk. They’d talk through the open window, and she’d give him some food from whatever they had on hand.

His name was Gustav Schwarzenegger. They got married late in 1945. He was thirty-eight, and she was twenty-three. My father was assigned to Thal and put in charge of a four-man post responsible for the village and nearby countryside. The salary was barely enough to live on, but with the job came a place to live: the old forester’s lodge, or Forsthaus. The forest ranger, or Forstmeister, lived on the ground floor, and the Inspektor and his family occupied the top.

My boyhood home was a very simple stone and brick building, well proportioned, with thick walls and little windows to keep out the alpine winters. We had two bedrooms, each with a coal oven for heat, and a kitchen, where we ate, did our homework, washed ourselves, and played games. The heat in that room was supplied by my mother’s stove.

There was no plumbing, no shower, and no flushing toilet, just a kind of chamber pot. The nearest well was almost a quarter mile away, and even when it was raining hard or snowing, one of us had to go. So we used as little water as we could. We’d heat it and fill the washbasin and give ourselves sponge or cloth baths—my mother would wash herself first with the clean water; next, my father would wash himself; and then Meinhard and I would have our turn. It didn’t matter if we had slightly darker water as long as we could avoid a trip to the well.

We had wood furniture, very basic, and a few electric lamps. My father liked pictures and antiques, but when we were growing up, these were luxuries he couldn’t afford. Music and cats brought liveliness to our house. My mother played the zither and sang us songs and lullabies, but it was my father who was the real musician. He could play all the wind and reed instruments: trumpets, flügelhorns, saxophones, clarinets. He also wrote music and was the conductor of the region’s gendarmerie band—if a police officer died anywhere in the state, the band would play at the funeral. Often on Sundays in summer, we’d go to concerts in the park, where he would conduct and sometimes play. Most of our relatives on his side were musical, but that talent never made it to Meinhard or me.

I’m not sure why we had cats instead of dogs—maybe because my mother loved them and they cost nothing because they caught their own food. But we always had lots of cats, running in and out, curling up here and there, bringing down half-dead mice from the attic to show off what great hunters they were. Everyone had his or her own cat to curl up with in bed at night—that was our tradition. At one point, we had seven cats. We loved the cats, but never too much, because there was no such thing as going to the vet. If one of the cats started falling over from being too sick or too old, we’d wait to hear the shot from the backyard—the sound of my father’s pistol. My mother, Meinhard, and I would then go out and make a grave with a little cross on top.

My mother had a black cat named Mooki that she constantly claimed was unique, although none of us could see why. One day when I was about ten, I was arguing with my mother about not wanting to do my homework. Mooki was nearby, curled up on the couch, as usual. I must have said something really uppity because my mother moved to smack me across the face. I saw it coming and tried to fend her off, but instead I hit her with the back of my arm. In a second, Mooki was off the couch—she leaped up between us and started clawing at my face.

pulled her off me and yelled, “Ow! What is this!?” Mom and I looked at each other and burst out laughing, even though I had blood running down my cheek. Finally, she had proof that Mooki was special.
Arnold Schwarzenegger

Arnold Schwarzenegger served as governor of California from 2003 to 2011. Before that, he had a long career, starring in such films as the Terminator series; Stay Hungry; Twins; Predator; and Junior. His first book, Arnold: The Education of a Bodybuilder, was a bestseller when published in 1977 and, along with his Encyclopedia of Modern Bodybuilding, has never been out of print since.